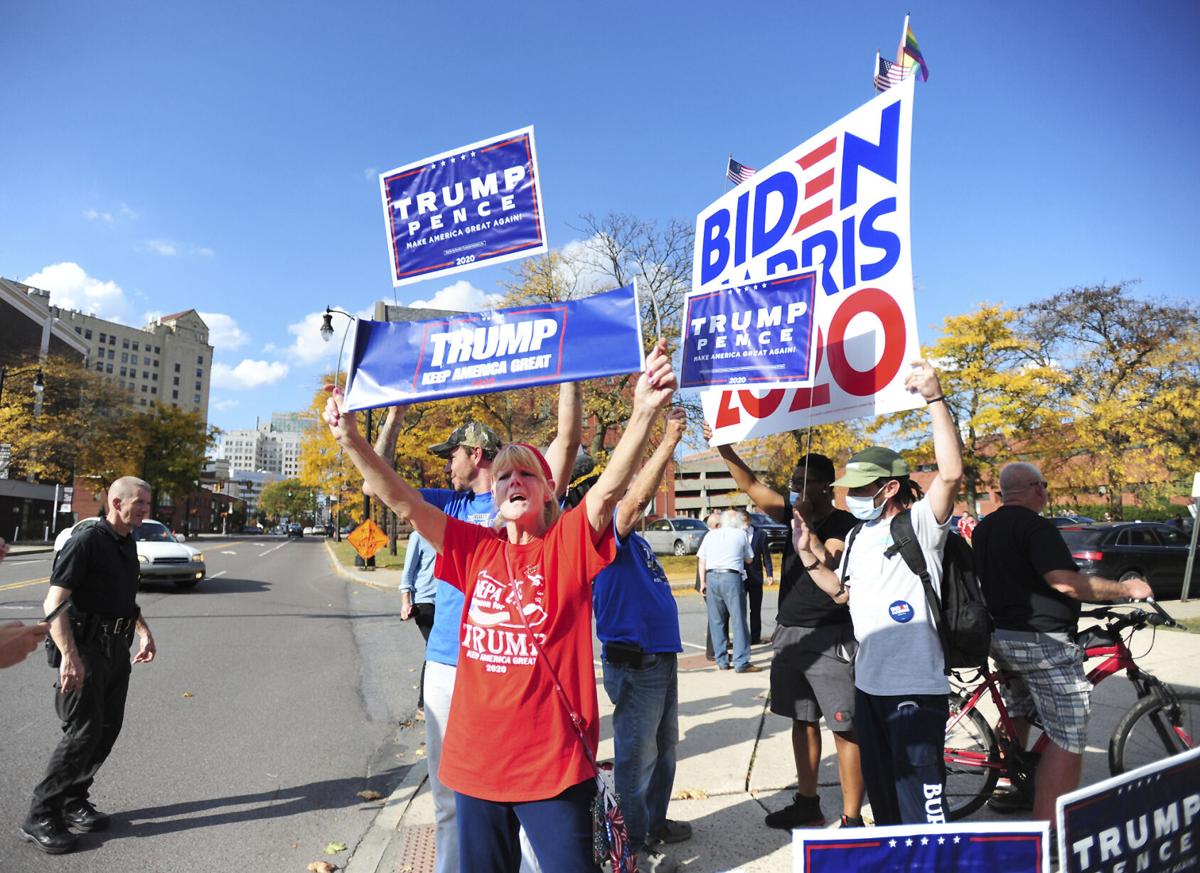 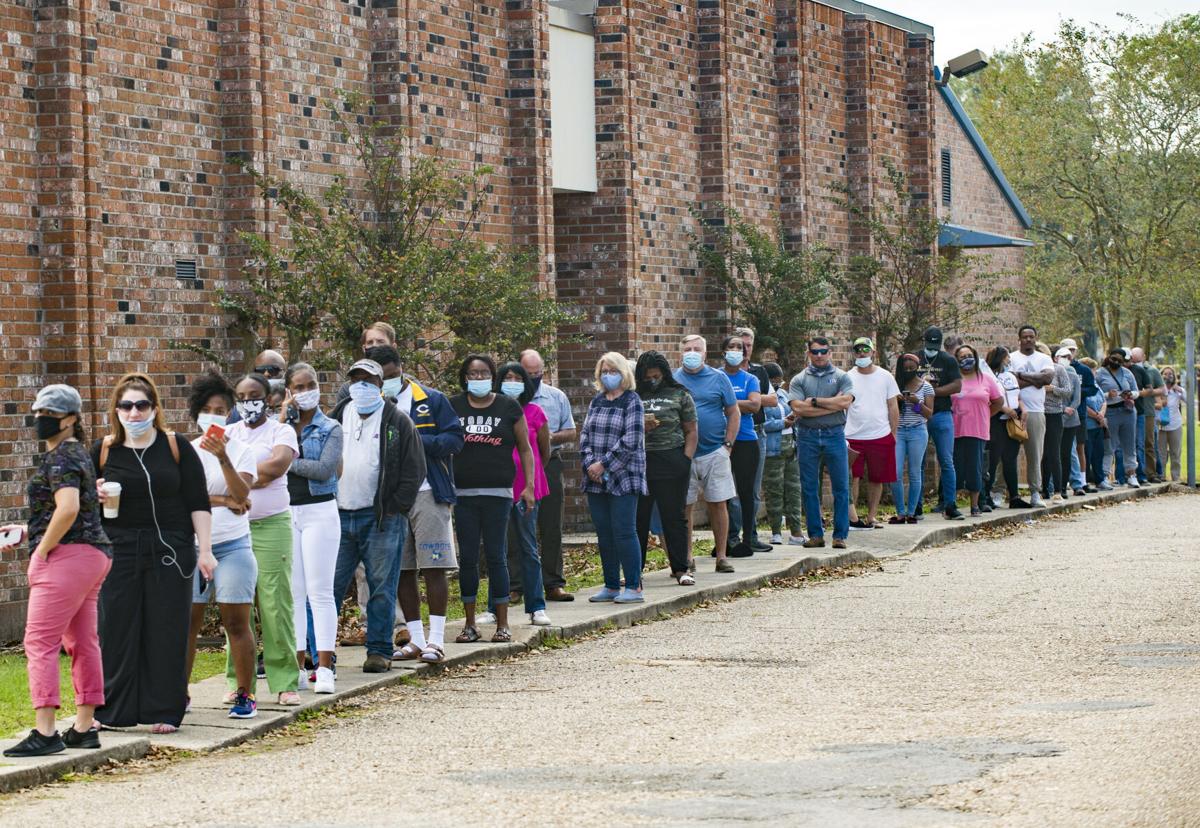 Voters line up to cast their ballots during early voting Tuesday, October 27, 2020, at the Martin Luther King Recreation Center in Lafayette, La. 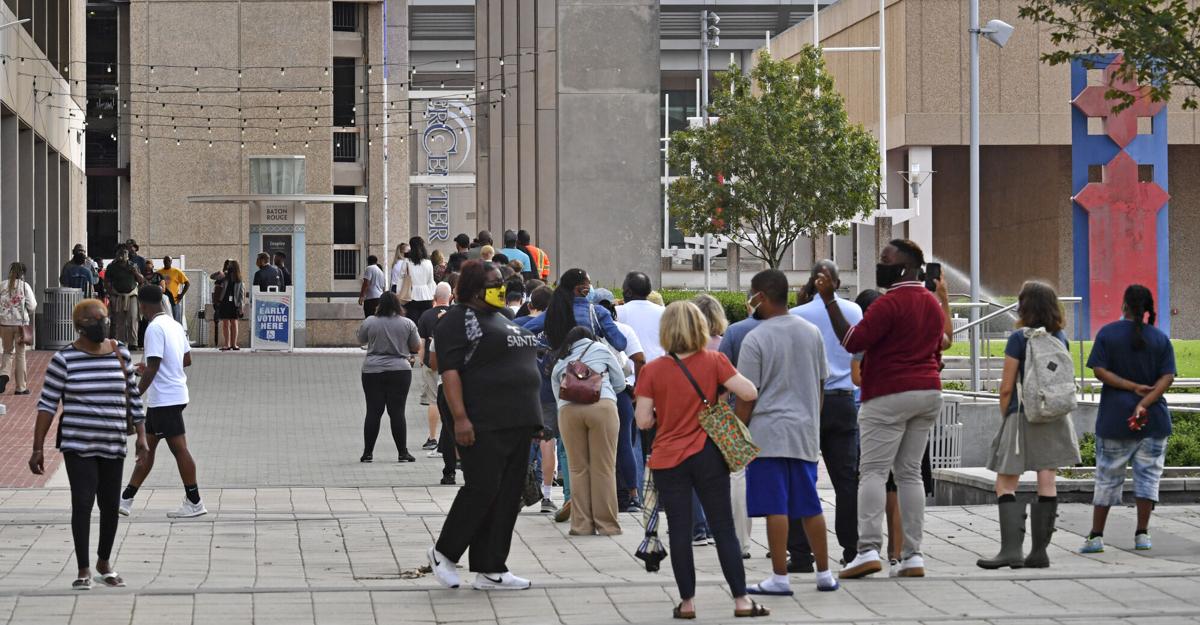 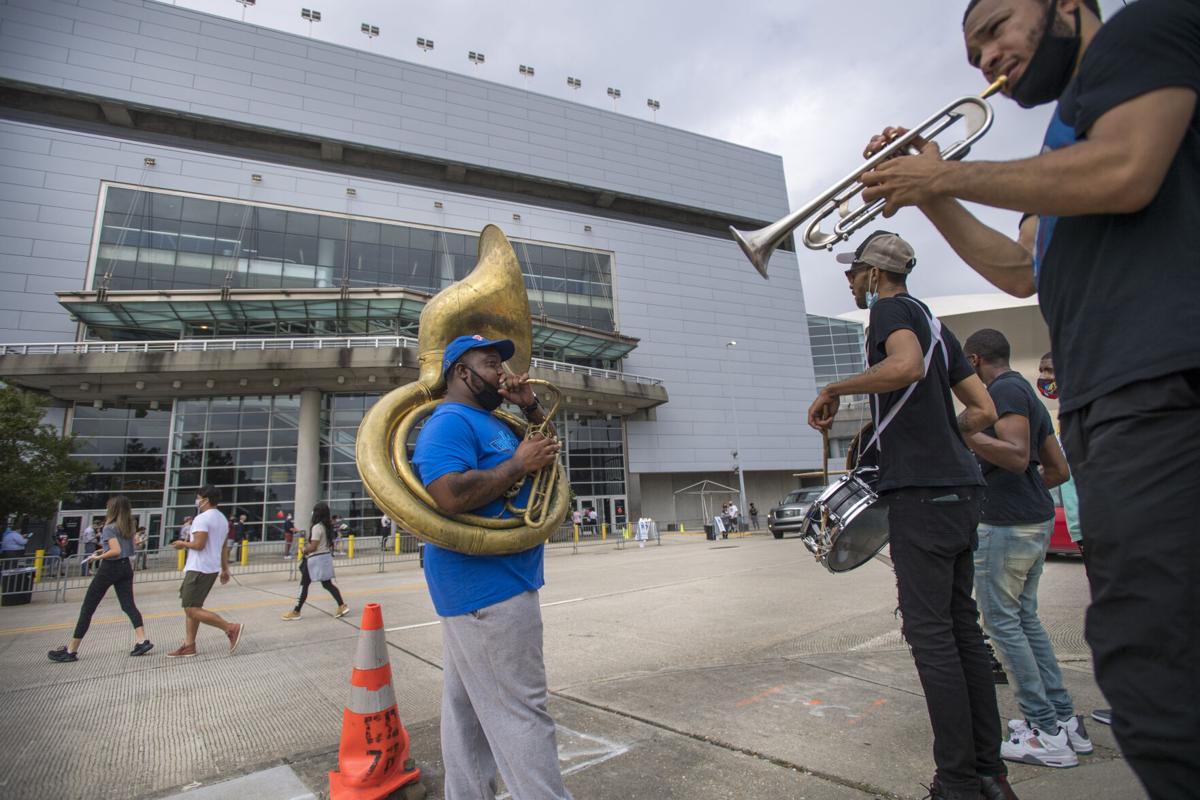 Voters line up to cast their ballots during early voting Tuesday, October 27, 2020, at the Martin Luther King Recreation Center in Lafayette, La.

After a record-setting early voting period that saw nearly 1 million people cast ballots in person or by mail, election officials in Louisiana are expecting the state could see the largest turnout in the presidential election in more than two decades.

And despite a 132% increase in mail ballots for the 2020 election compared to the 2016 presidential contest, election administrators in East Baton Rouge, Jefferson, Orleans and Lafayette parishes say they plan to have the mail ballots counted on election night. Those parishes have so far accounted for more than 36% of the mail ballots cast in Louisiana.

Louisiana Secretary of State Kyle Ardoin is projecting a 69% to 71% turnout for the election, in which the presidential contest between President Donald Trump and former Vice President Joe Biden tops the ballot.

The high end of that range would make the 2020 election the highest turnout in Louisiana since 1996, according to statistics provided by Ardoin’s office. In 2016, turnout was at 67.8%. In 1991, Louisianans turned out at an unheard-of 78.7% rate to elect Edwin Edwards governor over former Ku Klux Klan leader David Duke.

John Couvillon, a political analyst who tracks voting statistics, projects Louisiana will likely see around 2.2 million votes cast when all are tallied. That would add up to 72% turnout.

Democrats showed up in impressive numbers in the early voting period, Couvillon said, and he expects Election Day to be “marginally more conservative.”

Louisianans are not only voting for president. U.S. Sen. Bill Cassidy, a Republican, is defending his seat against a host of challengers, most notably Democratic Shreveport Mayor Adrian Perkins. Five of Louisiana’s six congressmen are up for reelection, and the 5th District held by the retiring U.S. Rep. Ralph Abraham is up for grabs. Along with local elections — East Baton Rouge Parish is electing mayor-president and Orleans Parish is choosing a new district attorney — voters statewide will decide on seven wordy constitutional amendments and a sports betting proposition.

In East Baton Rouge Parish, the “eye-popping” surge in early votes points to an “overall very high turnout” in the contest, said Registrar of Voters Steve Raborn. Nearly 100,000 have already cast ballots in the parish, double the early voting period from 2016.

Our Views: Early voting, and mail ballots, show their worth in pandemic

Louisiana voters have again set records with early voting and casting ballots by mail absentee. Whatever the partisan analyses may show, and t…

“We think polling places are going to still be very busy on Election Day,” Raborn said.

Poll workers will be wearing masks, sanitizing voting machines and pens between voters and sit behind sneeze guards, Raborn said. Voters are encouraged to wear masks, but are not required. He expects turnout will exceed 70% in East Baton Rouge Parish.

Across the country, election observers have suggested results could take longer than normal to report on Election Day because of the influx of mail ballots.

In Louisiana, legislation passed during the recent special session allows election officials to start preparing mail ballots four days before Election Day. That involves tearing flaps and verifying signatures. On Election Day, the Board of Election supervisors for each parish oversees the counting of those ballots, which in many parishes will begin earlier in the day than normal to account for the large number. Raborn and other local officials said they have more staff on hand this time to count ballots.

The presidential election has sucked the oxygen out of politics. But there are white-hot U.S. Senate races that are also worth watching.

“We do expect to be done on election night,” Raborn said. “I feel like we’re a little bit better prepared. Because we can start the early verification process, I think we should be in pretty good shape.”

Mail ballots must be received by the election officials by 4:30 p.m. Monday to count. Voters can track the ballots on Ardoin’s website, where they will be listed as “pending” until they are counted. Voters can hand-deliver their ballots to registrars of voters offices or curbside drop-off locations in parishes that have them.

Emily Byrd, a New Orleans voter, decided to vote by mail in all three Louisiana elections this year for health and safety reasons amid the pandemic. She and her husband dropped their ballots for the presidential contest in the mail on Oct. 12. Byrd reported an issue with her ballot not showing up in the secretary of state's system to ProPublica's Electionland project, but the issue was later resolved.

A chronic voter, Byrd said she intends to vote by mail in the future with lengthy ballots such as this one.

Beset by coronavirus and hurricanes, Calcasieu residents take joy in opportunity to vote

Southwestern Louisiana people have seen trouble in triple of late: COVID-19, then hurricanes Laura and Delta, which battered their homes, busi…

"Just the sheer volume of the November ballot … it took time to research all those different elements of the ballot," Byrd said. "Maybe for a shorter one I’d walk over to vote at John F. Kennedy High School. But otherwise for the longer ballots you need to do your research."

In the New Orleans area, local clerks of court and state officials were scrambling to figure out if they would need to move polling places because of damage and power outages caused by Hurricane Zeta.

Orleans Parish Clerk of Court Arthur Morrell said Thursday his office was surveying election infrastructure and scoping out possible megaprecincts. He said his office would send out alerts as soon as possible to notify voters whose precinct changes, and have staffers on hand at the old site to notify them.

In Calcasieu Parish, dozens of precincts are being consolidated into several mega-precincts, including those at the Lake Charles Civic Center and Burton Coliseum. That’s because a host of polling places were damaged or destroyed by Hurricanes Laura and Delta.

The number of votes cast in the 2020 presidential election in Louisiana, so far, have shattered records for early and mail-in voting, with the…

The process for preparing mail ballots in Jefferson Parish was set to start Friday. The counting will likely start early in the afternoon Tuesday, Gegenheimer said, and there likely won’t be any problems getting the count done that day.

If statewide turnout is 71%, Gegenheimer said it will probably be “at least that” in Jefferson Parish.

About 47,000 voters — an “incredible” amount — have already voted in Lafayette, said Louis Perret, the parish clerk of court. He hopes the parish will set a record for turnout, pushing 80%, when all is said and done. Normally, mail in ballots total around 2,400, and the parish was at 11,000 and counting Thursday, he said.

“We are in unprecedented times of a voter turnout that we have never seen before. If this holds true … I believe we will set a record in Lafayette Parish,” Perret said.

Perret said the counting of mail-in ballots will start Tuesday morning, as opposed to the afternoon in a normal election. He expects to have the task completed on election night, even if it takes longer than normal.

A “minuscule” number of ballots are rejected each year, he said, almost always because the voter didn’t sign it, didn’t put their mother’s maiden name or didn’t have a witness signature.

He also encouraged voters to download the secretary of state’s Geaux Vote app to look at their ballot beforehand and figure out their selections. Voters have up to three minutes in the booth, he said, unless they are disabled.

Trump has railed against the increase in mail ballots across the country, suggesting falsely they will bring fraud and that mail-in ballots filled out for him are being dumped in rivers or creeks. The Associated Press called that a “fabrication.”

As for voter fraud, Perret noted unverified rumors start flying on social media in every major election. But given Louisiana’s protocols, “we will be able to tell if someone tried to vote twice.”

“Any time you have human beings interacting with computers, I will freely admit mistakes are made,” Perret said. “But they are minuscule. Any type of vote fraud allegation, any type of Facebook posting form a non-election official should be viewed with great skepticism and people should be patient before reacting.”

Election Day in Acadiana: Where to vote? What's on the ballot? Where can I find results?

With the president and a number of local races on the ballot, officials believe Louisiana could see the largest turnout for a presidential ele…