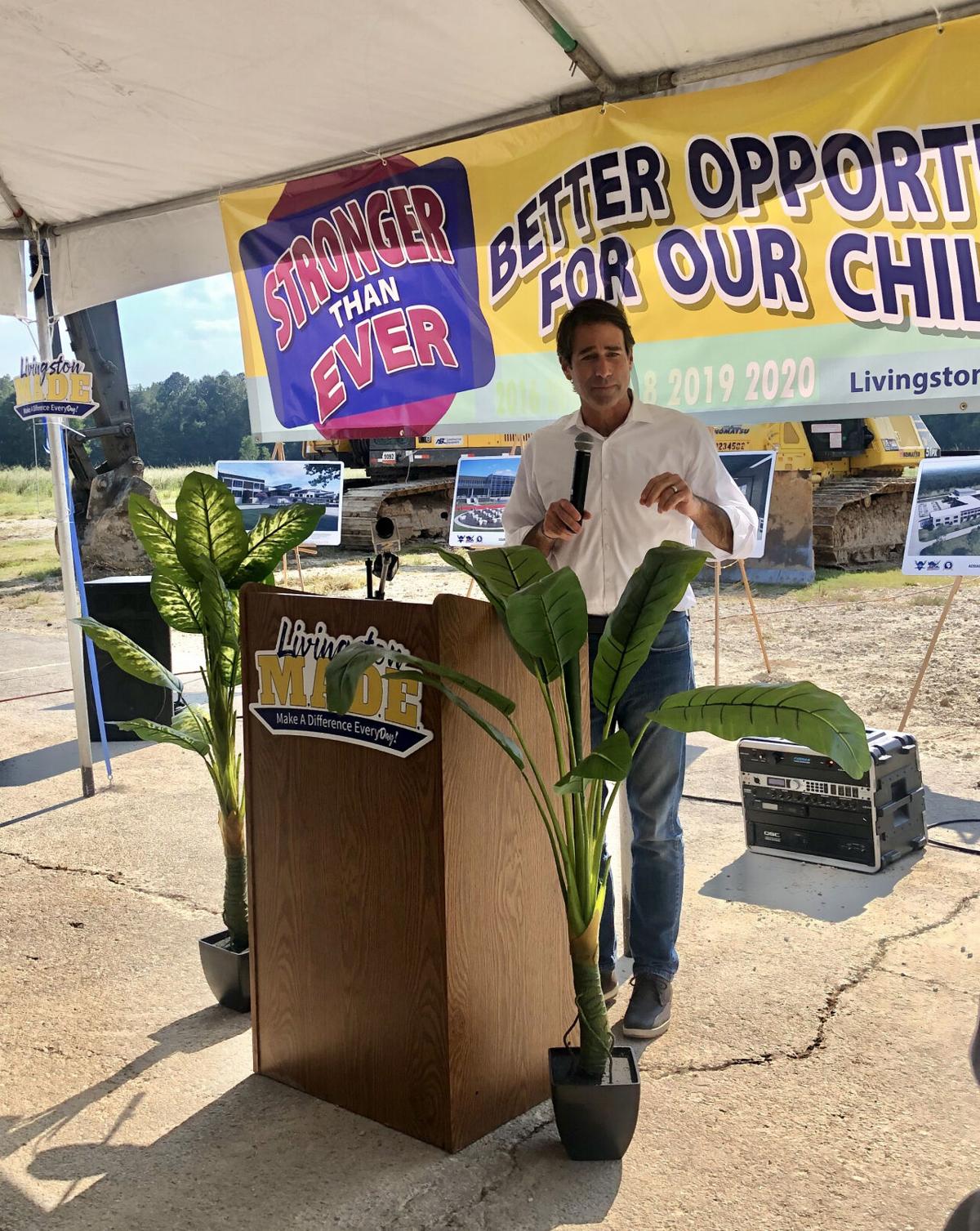 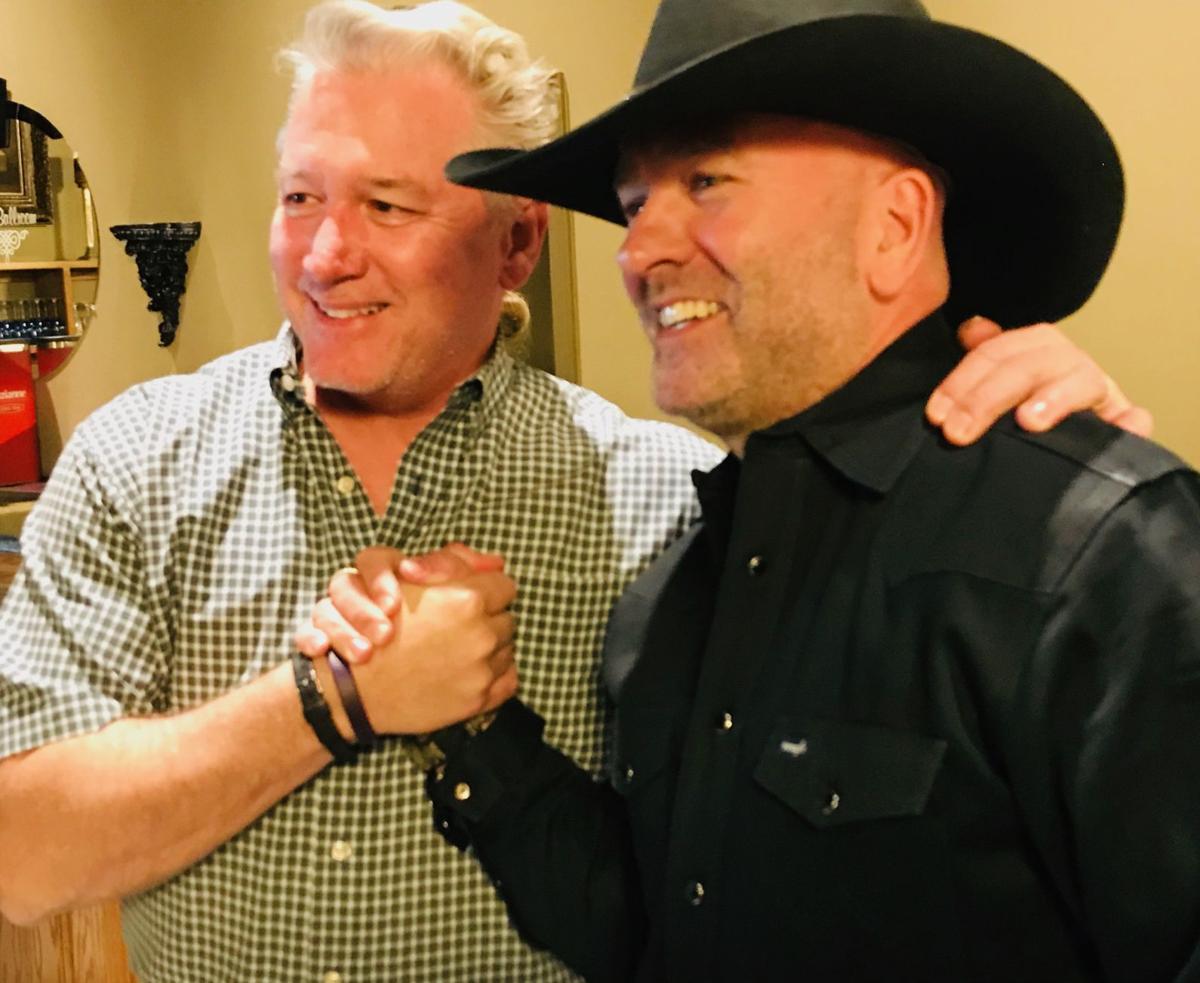 U. S. Rep. Clay Higgins, right, faced three challengers Tuesday in his bid for another term in Congress. Higgins is shown with Walter Campbell, a realtor, during a meeting in Broussard last year.

U. S. Rep. Clay Higgins, right, faced three challengers Tuesday in his bid for another term in Congress. Higgins is shown with Walter Campbell, a realtor, during a meeting in Broussard last year.

Graves held a wide lead from the beginning of his bid for a fourth term. He received 71% of the 373,961 votes cast in the district's 579 precincts plus early and absentee mail ballots. Unofficially, 70.5% of the district's registered voters participated in this election.

In the 5th Congressional District, two Republicans are headed into the Dec. 5 runoff in the race to succeed U.S. Rep. Ralph Abraham.

Graves was challenged by Libertarian Shannon Sloan, of Denham Springs, who said she was running primarily to publicize Libertarian positions; Richard Torregano, who lives in Baton Rouge and has no party affiliation; and Democrat Dartanyon "DAW" Williams, of Baton Rouge.

In his campaign, Graves touted gains for Baton Rouge-area road projects that he had a hand in, including $9.3 million for a new exit off Interstate 110 south at Terrace Avenue aimed at easing traffic around the Mississippi River bridge; $55 million for construction of an interchange at Pecue Lane off Interstate 10; and $135 million to build 8 miles of elevated highway on La. 1 between Leeville and Golden Meadow.

Torregano said both Republicans and Democrats have forgotten the middle class.

Williams said he favored reducing Medicare eligibility to age 55 instead of 65; boosting teacher pay by 25%; and ending the "digital divide" among students who lack internet access.

Richmond, 47, has spent much of the past two years hard on the campaign trail as national co-chair for former Vice President Joe Biden’s presidential campaign but was widely expected to win his own election against five relatively unknown and unfunded challengers without breaking a sweat. He received 64% of the 315,861 votes cast. Unofficially, 60% of the district's voters cast ballots

The district includes most of Orleans Parish and parts of Jefferson Parish, then runs up the Mississippi River collecting Black-majority precincts in predominantly minority neighborhoods of north Baton Rouge.

U.S. Rep. Clay Higgins, R-Lafayette, a former car salesman who earned fame after becoming a law enforcement officer, jumped out to a big lead when early and absentee mail ballot results were announced. He continued racking up votes as Election Day ballots were counted. With all 566 precincts outstanding, Higgins pulled down 69% of the 294,787 votes cast the 10-parish southwest Louisiana district. Unofficially, the 3rd District had the lowest turnout at 56.8% of any of the congressional races.

Higgins has long been known for his tough talk on crime, wearing military-style gear in the popular Crime Stoppers segments on local television. He sparked controversy earlier this year when he said social justice protesters in Louisiana should be met with deadly force.

He enjoyed a huge financial lead throughout the race.

The 5th District is a predominantly rural and conservative district that covers Alexandria and Monroe then along the top of the Florida Parishes through Bogalusa to the toe of the boot. The dynamic usually breaks down to a contest between candidates from Alexandria and Monroe, then between Democrats and Republicans.

Abraham’s former chief of staff, Luke Letlow, R-Start, a community near Monroe, is headed for a runoff with 33% of the 309,442 votes cast. His opponent will be state Rep. Lance Harris, R-Alexandria and former state House majority leader, who received half as many votes as Letlow but 456 more than Democrat Candy Christophe, a businesswoman from Alexandria, with all 825 precincts counted. The unofficial turnout for the 5th District was 63.2% of the district's registered voters.

The other races are:

Scalise, 55, has held Louisiana’s 1st Congressional District seat since 2008 and has climbed the House GOP leadership ranks to become, as minority whip, the chamber’s No. 2 ranking Republican. He received 72% of the 270,287 votes cast in the district's 545 precincts. Unofficially, 69.2% of the district's registered voters participated in the election.

The district is based in Jefferson Parish and the north shore of Lake Pontchartrain and also includes a small portion of New Orleans, as well as much of the southeast Louisiana coast.

Dugas, a 57-year-old disabled military veteran, has challenged Scalise in every election since 2014 but never cracked 14% against the incumbent until this election when she received 25% of the vote. Kearney, a 62-year-old computer programmer, drew 3% of the vote against Scalise in 2016, 1% in 2018 and 2% this time.

The challengers were Republican Ben Gibson, of Bossier City, plus two Democratic candidates from Shreveport: Kenny Houston and Ryan Trundle.

U.S. Rep. Garret Graves is making a bid for his fourth term in Congress against three longshot challengers who are running nearly invisible ca…