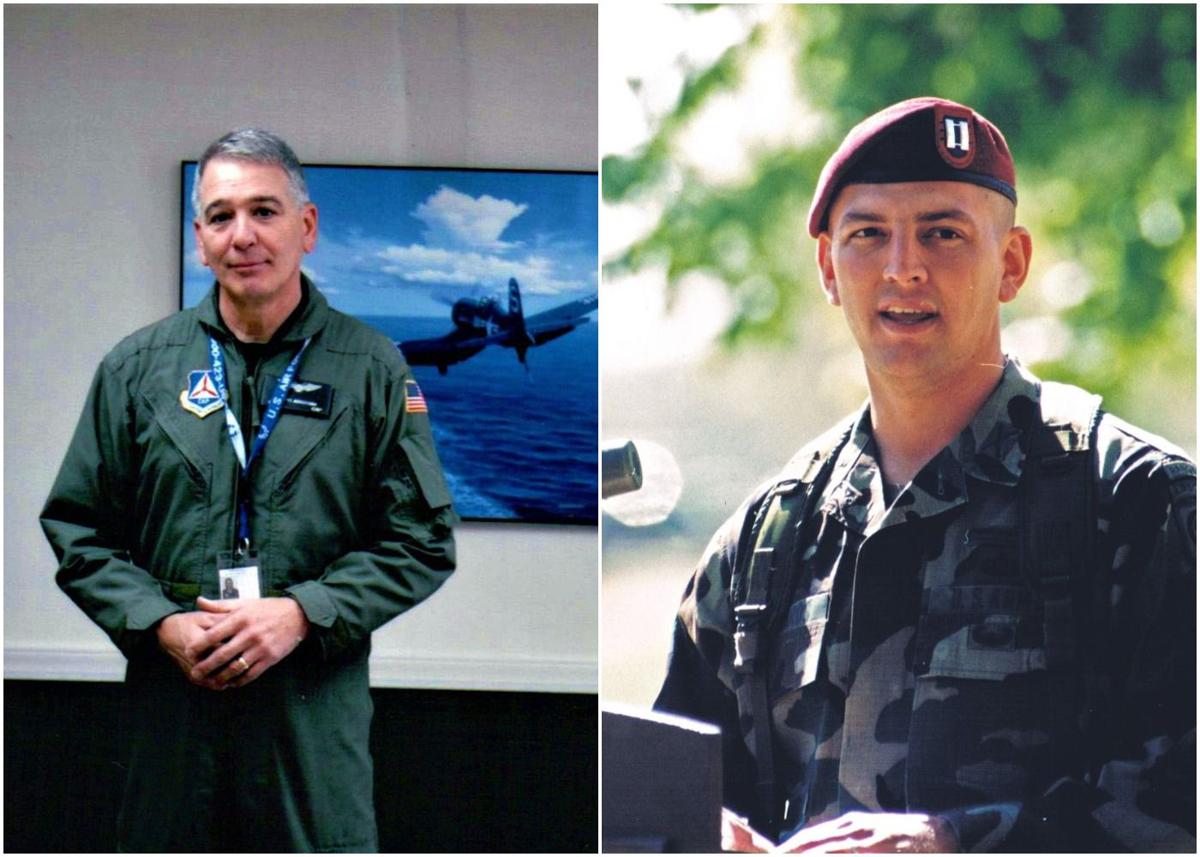 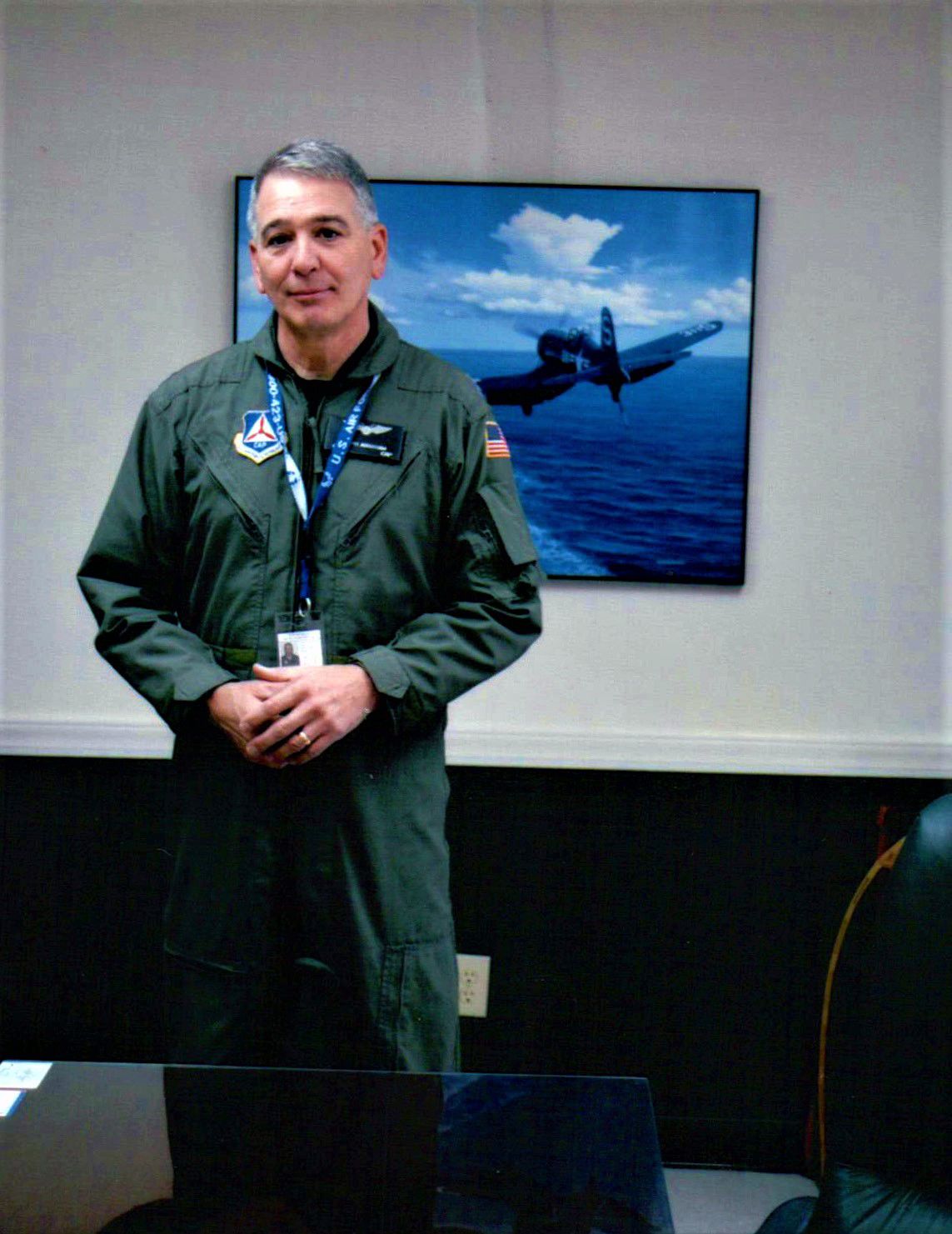 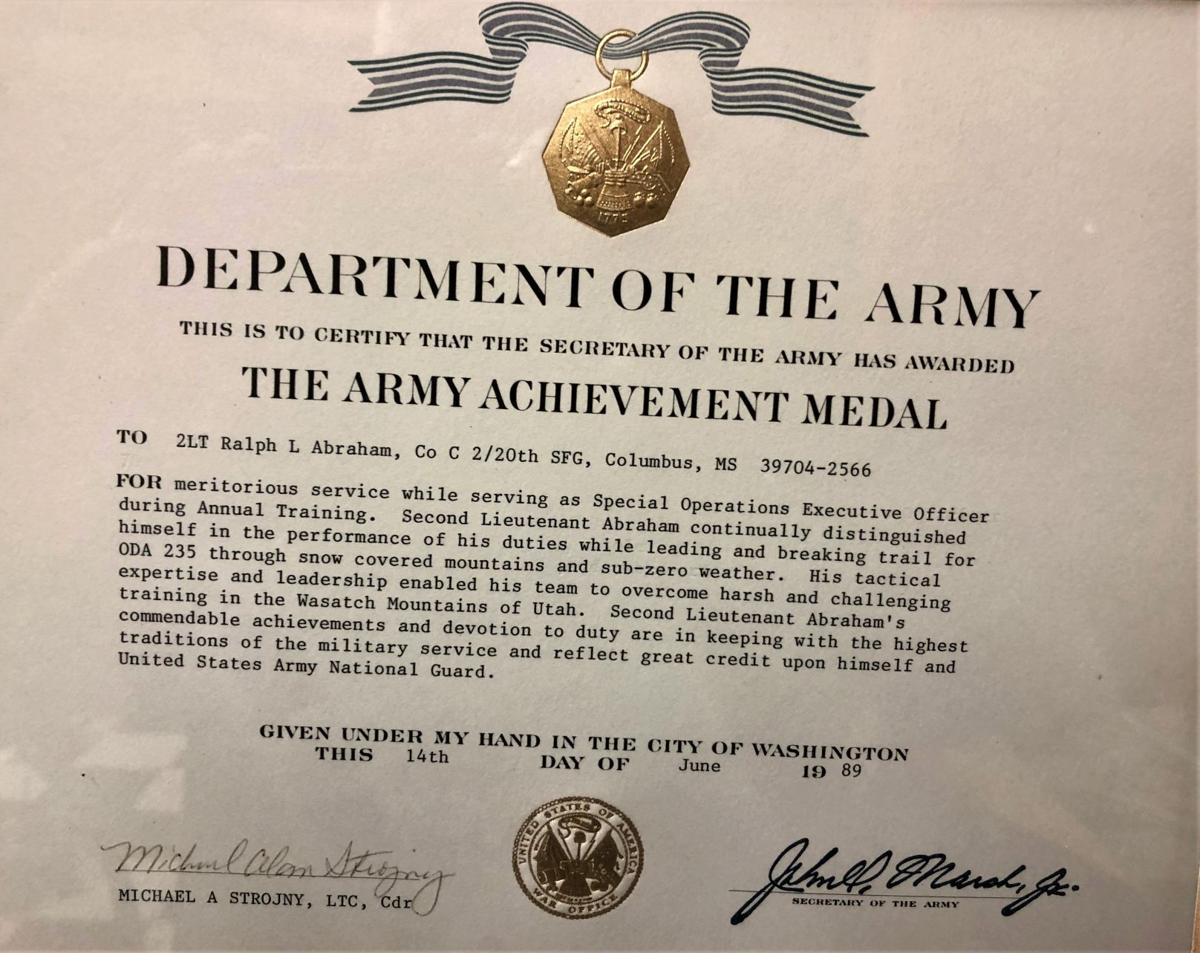 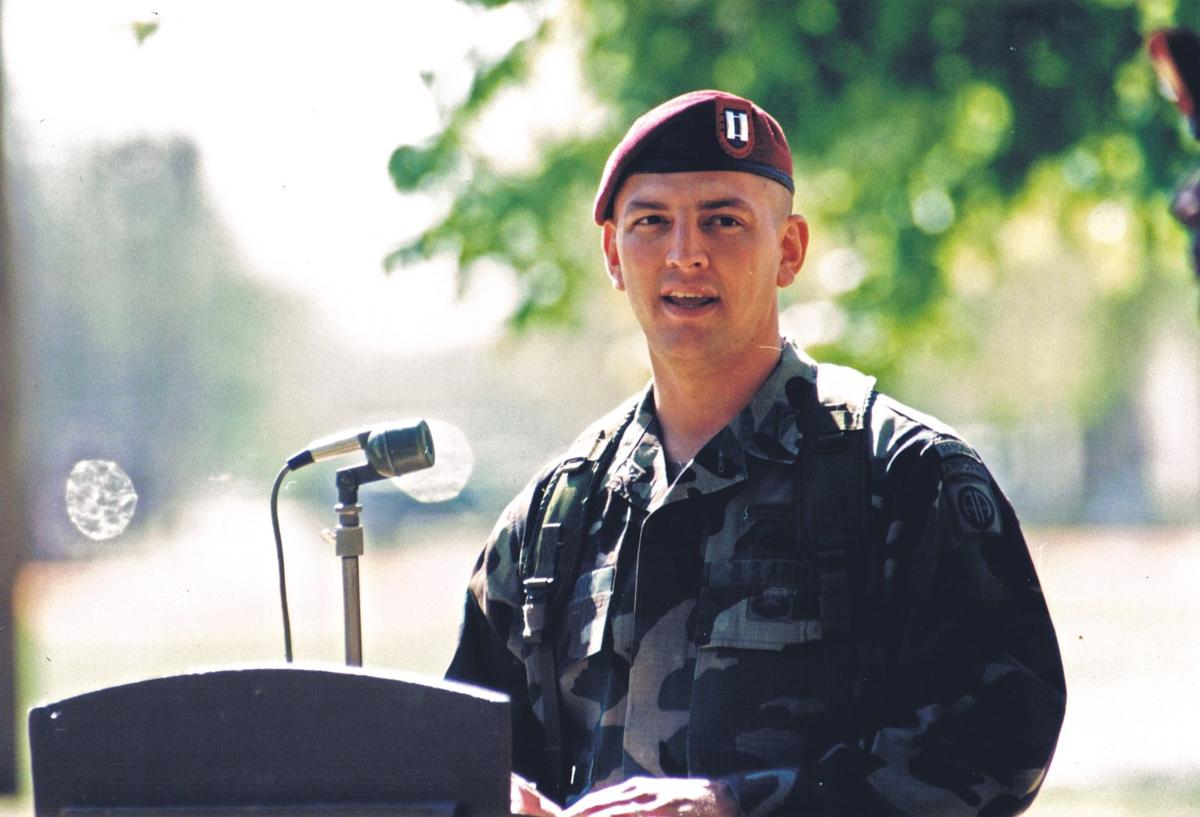 West Point is always mentioned when political professionals try to explain how John Bel Edwards catapulted from the Louisiana House’s backbench to become the Deep South’s only Democratic governor.

Having graduated from the U.S. Military Academy at West Point and served as a Ranger in the 82nd Airborne Division gave many conservative voters enough comfort to cast ballots for Edwards. “It was the tangible evidence they needed that could go ahead and vote for a Democrat,” said Roy Fletcher, who was a strategist on the campaign of one of the three Republicans Edwards beat in 2015.

For many voters in this deep red state, military service shows “a commitment to patriotism and core values,” regardless of party affiliation, he added.

That is part of the reason why U.S. Rep. Ralph Abraham, the Alto Republican who is one of Edwards reelection opponents, mentions his military service in all his campaign advertising, even superimposing “veteran” in the background of some spots. Abraham is often seen in his Civil Air Patrol jacket looking like he just walked off the flight line after a mission.

Political Horizons: In a 'policy-barren' campaign, Gov. Edwards' challengers might as well be 'blank slates'

The first gubernatorial campaign I really remember was in 1979, and that was because I looked into the eyes of most of the nine candidates at …

Comparing a solider trained to be at the tip of the sword with a weekend warrior is difficult at best, Fletcher said, but politically, Abraham’s message to Republican voters is that he also has veteran bona fides, so they can focus on other issues.

This is the military, however, where even who can call themselves veterans is open to often rancorous interpretation. Although state National Guardsmen and other part-time, volunteer units aren’t considered “veterans” in strict legal terms, they are by the American Legion, which is the nation’s largest veterans’ organization.

“I’m proud to say we have two veterans in the race,” said Byron K. Comeaux, commander of the American Legion branch in Louisiana.

Not wanting to pick sides in a gubernatorial contest with six candidates, including Baton Rouge industrial contractor Eddie Rispone, who is spending his own millions, Comeaux said the rules, at least as far as the American Legion is concerned, is that both regular soldiers and National Guardsmen are veterans.

Comeaux’s clear line becomes murky when talking about qualifying for veterans benefits, such as money for education and training, and special rates for home loans. National Guardsmen, who are a state’s go-to responders when disaster strikes, qualify for veterans benefits only if they were “actively deployed” on federal orders.

Both Abraham and Edwards served during relatively peaceful times in the U.S. during the late 1980s and early 1990s.

The military was dispatched to the Middle East and Central America — the island nation of Grenada was invaded in 1983 and troops went into Panama to arrest strongman Manuel Noriega in 1989. Operation Desert Storm, in which U.S. forces drove the Iraqi army out of Kuwait, lasted from Jan. 17, 1991, to April 11, 1991. There were hostilities in Sierra Leone, Somalia as well as Bosnia and Herzegovina in the early 1990s. But the next out-and-out war didn’t occur until 2001 with the invasion of Afghanistan after the 9/11 attacks.

Rispone, the other major Republican contender against Edwards’ reelection, has not referred to the military in his advertising and speeches.

The son of a compressor machinist back when the ExxonMobil Baton Rouge plant was called the Humble Oil Refinery, Rispone grew up among a conclave of relatives living on and around Hollywood Street in north Baton Rouge neighborhoods that housed plant workers and tradesmen.

He turned 18 in 1967, when the military draft tripled in size to provide servicemen for the Vietnam War. Rispone fit the profile of the 2.2 million drafted during the war — 55% came from blue-collar homes — out of the pool of 27 million young men eligible during the conflict.

Rispone registered for the draft, as required by law, then enrolled at LSU, which allowed him to defer induction into the military. Upon graduation in 1972, when Rispone was available for service, he was not drafted.

But by that time, the war was winding down and the Paris Peace Accords were signed on Jan. 27, 1973, which effectively ended hostilities for the U.S.

Gov. John Bel Edwards lost a bit of ground in an independent poll taken earlier this month compared to one in April, but the latest survey sho…

After graduating as the Amite High School valedictorian in 1984, Edwards entered the Military Academy, on a bluff up the Hudson River from New York City, on the recommendations then U.S. Sens. Russell Long and J. Bennett Johnston. He was selected by his classmates to be the vice chairman of West Point’s honor committee and made the dean’s list for good grades.

Edwards graduated in 1988 with an engineering degree and, commissioned as second lieutenant, went to Infantry Officer Basic Course at Fort Benning in Columbus, Georgia.

Edwards attended Ranger school and was assigned to the 25th Infantry Division in Hawaii for three years.

After completing the Infantry Officer Advanced Course, he was assigned to the U.S. Army 82nd Airborne Division at Fort Bragg in Fayetteville, North Carolina, where he commanded a parachute infantry company. He participated in training missions overseas, including in Korea, Japan, Thailand and Guam.

Edwards left the Army in 1996 as a captain to attend law school at LSU.

Like Rispone, Abraham escaped the Vietnam draft by entering LSU in 1972. He went on to graduate in 1980 from the LSU School of Veterinary Medicine.

In 1986, at the age of 32, Abraham volunteered for the U.S. Army National Guard in Mississippi.

He took the Infantry Officer Basic Course at Fort Benning and commissioned as a second lieutenant, was assigned to the National Guard’s 2nd Battalion 20th Special Forces Group, headquartered in Jackson, Mississippi, which is easier to get to from his Richland Parish home than Baton Rouge or New Orleans, where Louisiana National Guard units are located.

Abraham’s duty station was with Company C in Starkville. He became the executive office of Operational Detachment Alpha 235.

His training consisted of combat jumps, live fire exercises, mountain climbing and military maneuvers. He was awarded an Army Achievement Medal for one of the missions.

Abraham was admitted to medical school and placed on Individual Ready Reserve in 1989. He was honorably discharged in 1994 as a 1st lieutenant.

As a congressional candidate in 2014, Abraham got a little sloppy, often referring to himself, as he did in a televised debate, saying, “I’m a rural doctor; I am a veteran of the special forces.” Technically, Abraham should have said his special forces unit was part of the National Guard. Leaving that bit off gives the impression for some that Abraham was one of the elite soldiers who operate behind enemy lines to free hostages and such. And that stuck in the craw of some Green Berets who took Abraham to task.

“To call himself ‘special forces’ is a joke and an embellishment of his real military record,” wrote someone from Phoenix, who called himself “Team Sergeant,” one of several critics on a blog called Professional Soldiers on Nov. 25, 2014.

Rudy Bourg Sr., who was in the U.S. Army Special Forces for 21 years, isn’t as harsh.

A member of the state Veterans Affairs Commission, whom Edwards reappointed, Bourg said Abraham did much of the training required at the time for the Special Forces. “He did the training,” said Bourg, of Youngsville. “He is entitled to say he is a veteran of a National Guard special forces unit.”

In his run for governor, Abraham, now a member of the U.S. House Armed Services Committee, is careful with his terminology. He may wear his Civil Air Patrol jacket, a lot, but it’s more as fashionable accessory with blue jeans. Wearing the complete uniform is improper under U.S. Department of Defense directives that outline what active and veteran armed forces personnel can do in a political campaign.

Since leaving the National Guard, Abraham has continued to work with the Civil Air Patrol, a nonprofit, civilian auxiliary that is headquartered at Maxwell Air Force Base in Montgomery, Alabama. Volunteers, for instance, saved 158 lives and recorded 712 “finds” while helping out on search and rescue missions in their small, light airplanes. He still flies “green flag” missions, which help train ground troops how to accurately target air support and ammunition, and he is commander of the U.S. Air Force auxiliary’s Congressional Squadron at Joint Base Andrews, outside Washington, D.C.

Inartful wording at a forum earlier this month left the impression that Congressman Ralph Abraham, the leading Republican candidate for govern…

As a career U.S. Air Force officer, Rob Maness said he knows how closely veterans monitor what people say publicly about their military service — particularly in the past few years with so many “stolen valor” prosecutions of people claiming military achievements that were undeserved. Maness said he stresses with the candidates he mentors to not embellish their service records because that undermines the benefits of having been in the military.

In his first bid for public office, Maness scored third with 202,556 votes in the 2014 U.S. Senate race featuring eight candidates.

Maness agrees with Fletcher, the GOP strategist, that a military background shows voters’ patriotism and an adherence to values. But the key benefit is that the military requires people of widely divergent backgrounds to work together.

“You’re trained for that, to work with everybody to achieve a goal,” Maness said. “Elections are partisan, I get that, but once you win, you have to listen to people, achieve consensus.”