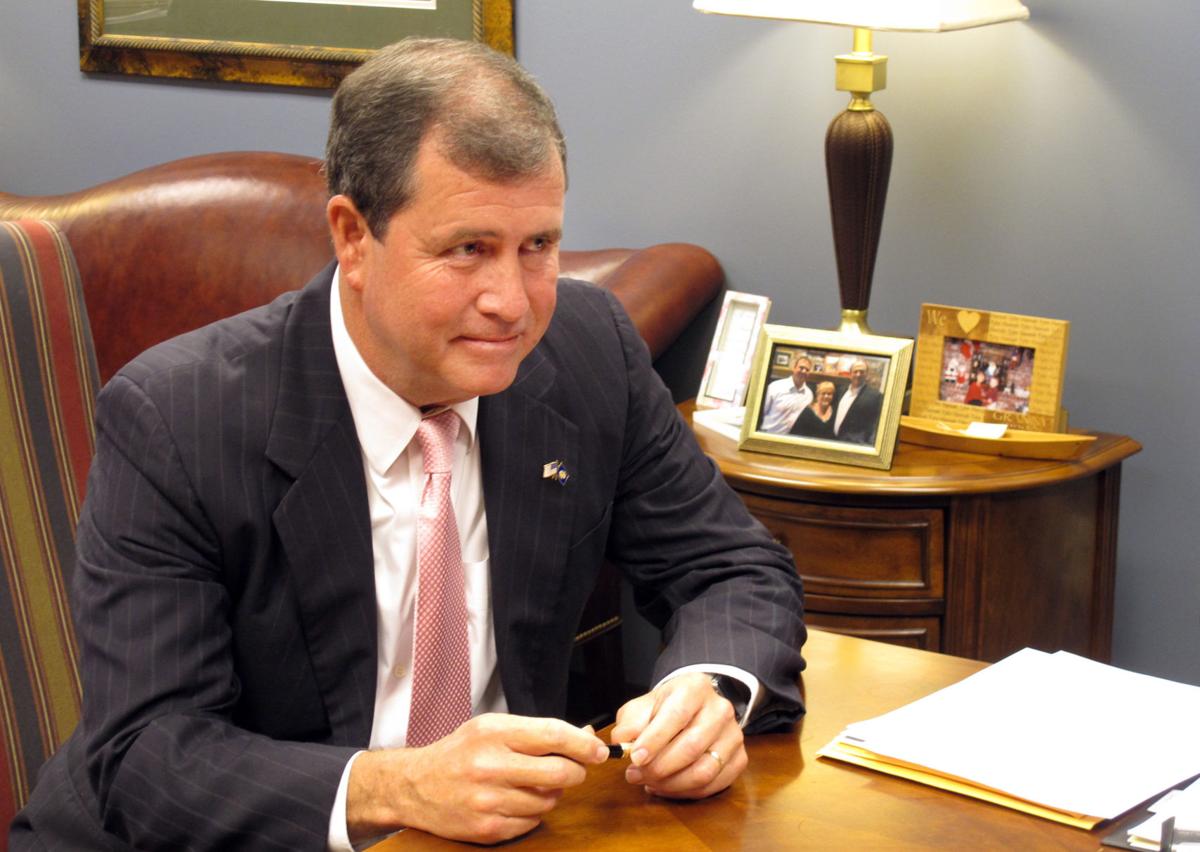 State Sen. Neil Riser, R-Columbia, talks with elections officials as he signs up to run for state treasurer, Wednesday, July 12, 2017, in Baton Rouge. All the major candidates for the vacant seat qualified for the Oct. 14 ballot on the opening day of the sign-up period. 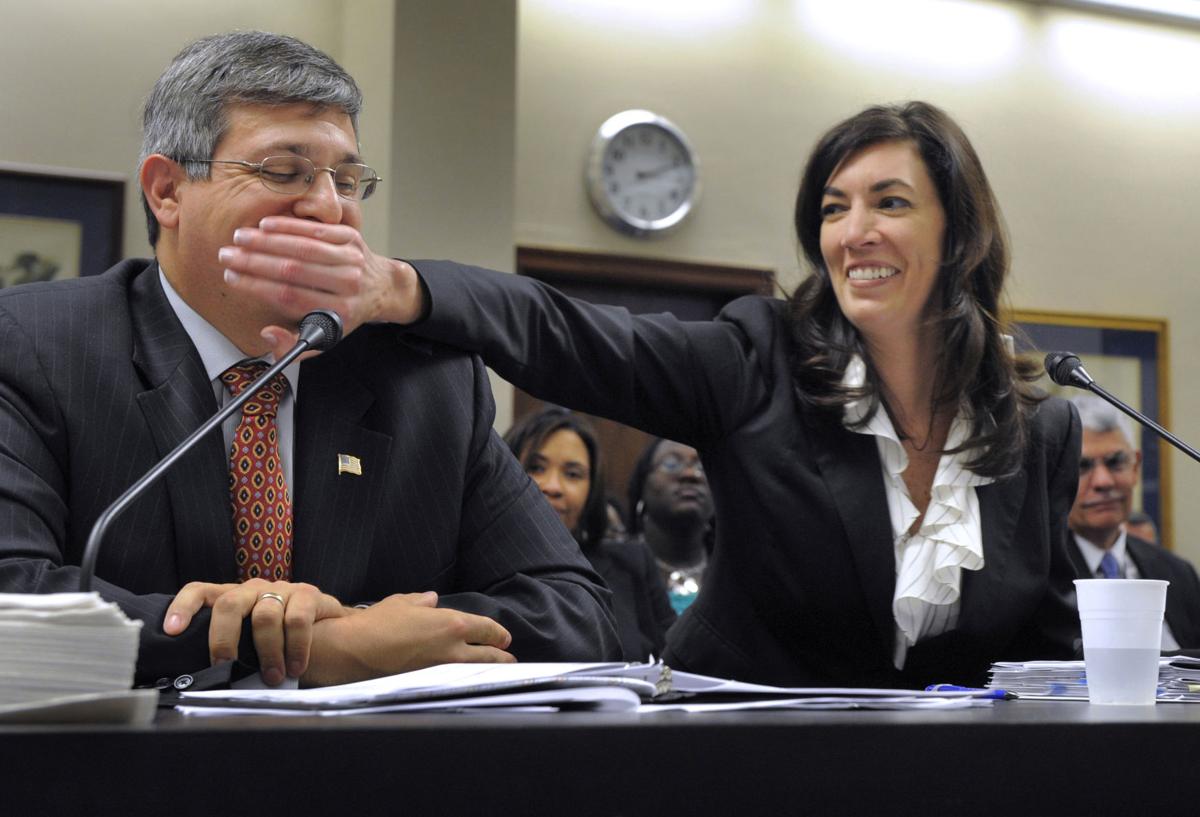 Back in April 2010, Angele Davis was commissioner of administration, and appeared regularly before the Louisiana Legislature. She got a laugh from the Senate Finance Committee when Alan Levine, then health secretary and fellow cabinet member, started joking about cuts she proposed to the health agency’s budget. Davis left the Jindal administration four months later. After seven years as a management consultant, Davis is running for state treasurer in the October special election. 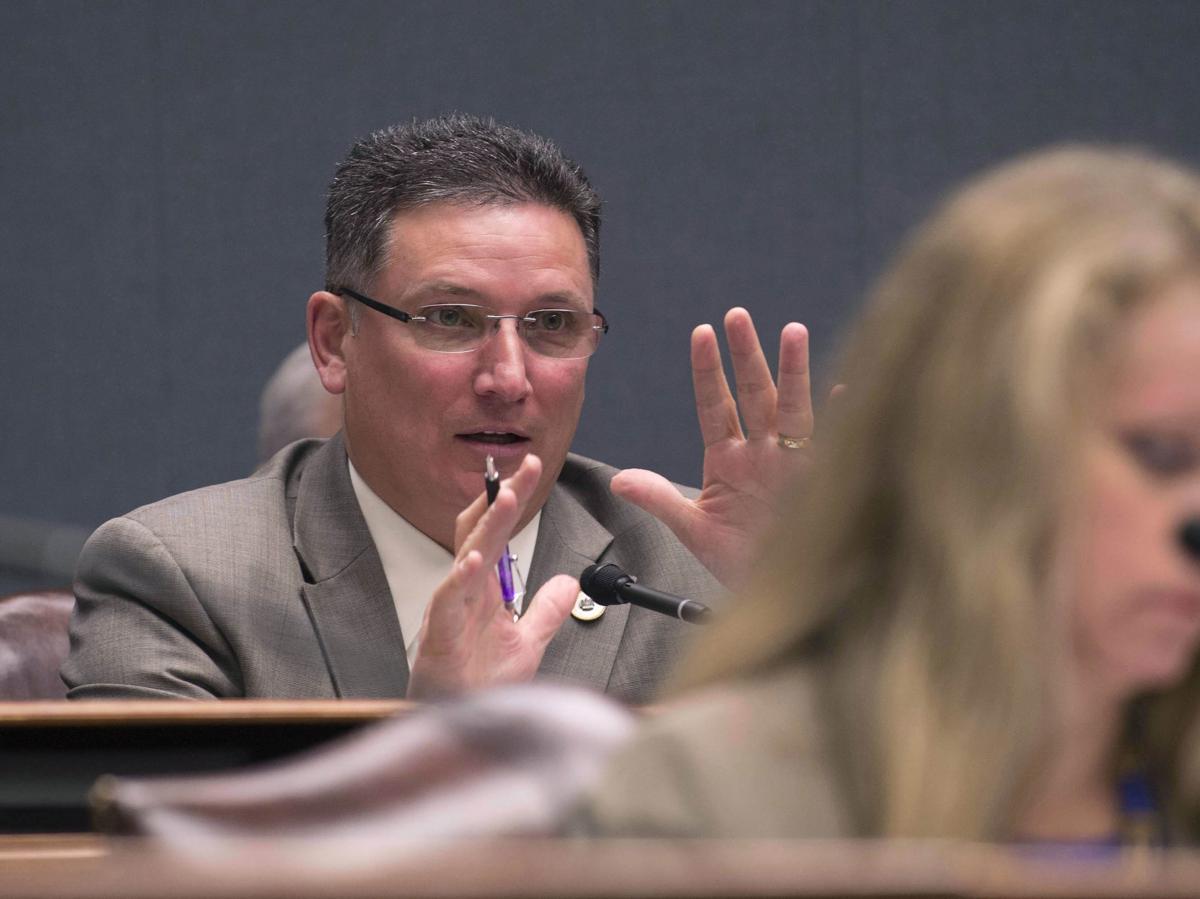 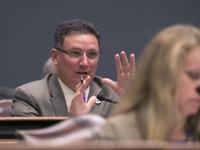 State Sen. Neil Riser, R-Columbia, talks with elections officials as he signs up to run for state treasurer, Wednesday, July 12, 2017, in Baton Rouge. All the major candidates for the vacant seat qualified for the Oct. 14 ballot on the opening day of the sign-up period.

Back in April 2010, Angele Davis was commissioner of administration, and appeared regularly before the Louisiana Legislature. She got a laugh from the Senate Finance Committee when Alan Levine, then health secretary and fellow cabinet member, started joking about cuts she proposed to the health agency’s budget. Davis left the Jindal administration four months later. After seven years as a management consultant, Davis is running for state treasurer in the October special election.

In fawning media coverage that included images of him handing checks to everyday people, John Kennedy transformed “unclaimed property” from an accounting process into the most recognizable task a state treasurer does.

Perceiving that unclaimed property could directly touch voters in a way that a state treasurer’s usual work with complex finances doesn’t, Kennedy took the program with him when he left the Revenue Department to become state treasurer in January 2000.

The main candidates vying for a chance to replace Kennedy as state treasurer in the Oct. 14 election praise Kennedy and promise to keep the program going despite brewing problems and controversy. Kennedy was elected to the U.S. Senate in 2016.

Louisiana Spotlight: Do you know anything about the upcoming Louisiana treasurer's race?

Pssst. Have you heard? There's a statewide election happening this fall in Louisiana, to fil…

Unclaimed property is lost money that is turned over to the state from a variety of sources, including payroll checks, old bank accounts, royalties, utility deposits, interest payments, stock certificates and life insurance proceeds.

Treasurer Ron Henson, who sits in the post until the fall election decides Kennedy’s successor, says people move and forget about their deposits and leftover accounts. The U.S. Supreme Court has ruled that businesses are required to turn over to the state money from dormant accounts if they can’t find the rightful owners.

“We get money every day and put that money in an escrow account,” Henson said. The information goes into a computerized database. Treasury employees search for owners of the money during regular events at shopping malls and community centers, as well as through an aggressive media campaign.

When someone makes a claim, the treasury employees vet the information and, if everything checks out, issue a check, $900 on average. Roughly 1 in 6 people in Louisiana has unclaimed property, meaning the odds are much better of finding lost dollars than winning the lottery, Henson said.

Louisiana returned a record-setting $35.5 million in unclaimed property to some 116,000 indi…

Despite the efforts to find owners, Louisiana is still holding more than $781 million waiting to be claimed. A lot of states have the same experience, but many have been moving to tap those accounts to shore up state government budgets.

Connecticut Treasurer Denise Nappier, for instance, told CT News Junkie in July, “Every dollar received in unclaimed property is one less dollar from our taxpayers, because the proceeds from unclaimed property help to pay for state programs impacting public health, public safety, education and consumer protection.”

A string of states, most recently Delaware, have changed their laws — usually by adjusting how long the funds can sit unclaimed — to more easily use the dollars.

The major Republican candidates in Louisiana’s election agree that’s not in the cards for Louisiana if any one of them is elected.

“It belongs to that individual, not the government. We need to ensure that’s the way it stays,” said state Sen. Neil Riser, R-Columbia, in comments echoed by his two main GOP rivals: former Commissioner of Administration Angele Davis, of Baton Rouge, and former state Rep. John Schroder, of Covington.

As candidates for state treasurer campaign, the main topic of conversation is one not in the…

Six people are running to fill out the remaining two years of Kennedy’s term as state treasurer. But Republican Terry Hughes, of Lafayette; Libertarian Joseph D. Little, of Ponchatoula; and Democrat Derrick Edwards, of New Orleans, have raised little money and have done little campaigning.

As the only Democrat, however, Edwards is leading in some polls. He did not respond to four requests for comment on this topic.

Louisiana’s law differs from many other states in that most of the unclaimed money already is being used by state government.

Riser, who once chaired the state Senate committee overseeing spending on infrastructure, pointed out that, every year, about $15 million in unclaimed property money goes to pay the bonds that helped build part of Interstate 49. Another $30 million is set aside to pay claims. But the rest, roughly $30 million of the $75 million collected between July 1, 2016, and June 30, 2017, went straight to paying state expenses.

If more claimants show up than are expected, Louisiana taxpayers would have to pay them under state law.

Candidate Schroder, who spent his years in the Louisiana House working on money committees, praised Kennedy’s use of unclaimed property money to help complete I-49.

“I will continue to make sure we use every tool available and make it as easy as possible for people to retrieve their money while we continue to invest in critical infrastructure improvements without burdening taxpayers,” he said.

But Louisiana’s laws lack clarity and consistency, which could lead to legal challenges, says the Council On State Taxation, a Washington, D.C.-based trade association representing 600 businesses. The council gave a D grade to Louisiana’s unclaimed property laws, pointing out the lack of an independent appeals process among the technical issues with which the group found fault. 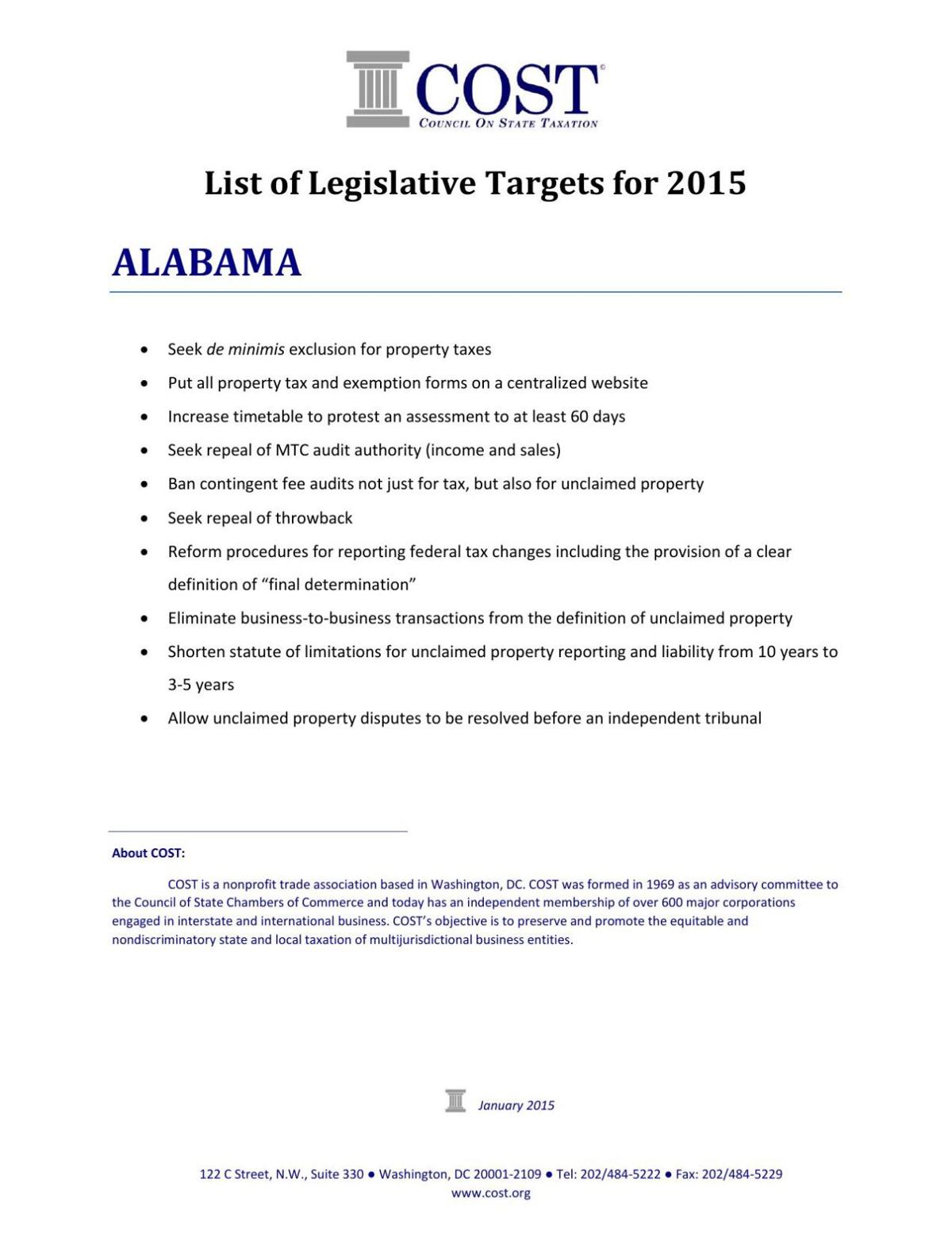 A lot of Louisiana claimants have complained too, mostly over how long the process takes.

Once an owner is found, Treasury Department personnel have to double-check the claim and identity before the money can be returned.

Kennedy had too few staffers to handle the thousands of claims. Processing started taking six months or longer.

The state Department of the Treasury has returned $101,473 in unclaimed money to hundreds of…

When Henson took over, he hired about 16 part-timers to help the nine staffers working on unclaimed property. He also instituted an online verification system to take care of some of the more routine verification tasks.

But the pilot program has not been without criticism over startup costs and security vulnerability.

Still, Henson said, the backlog has dropped to about 2½ months.

One of the first decisions the new treasurer will have to make when taking office after the Nov. 18 runoff is whether to continue Henson’s efforts.

“I’ll accelerate the new online processing system and find other innovative, 21st-century solutions that reunite people with their money as quickly as possible,” Davis said. “Government demands you pay your taxes on time. So when it owes you money, you should demand government return it just as timely.”

Source: Department of the Treasury

Secretary of State Tom Schedler, the man in charge of elections in Louisiana, now asks a simple question when meeting local officials: “How ma…

State Treasurer John Schroder said Monday he is having talks on the merits of U.S. Sen. John Kennedy's proposal to help finance the Comite Riv…