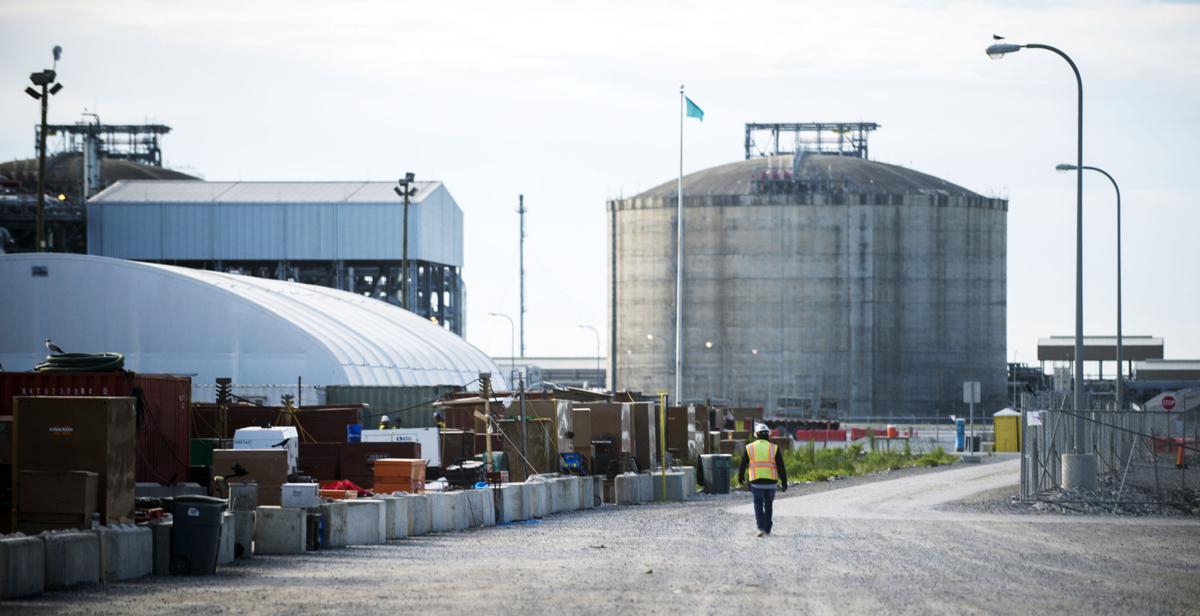 A worker walks on the Cameron LNG property in October 2019 near Hackberry. Cameron LNG achieved commercial operations with its first unit in August 2019 and second unit in February 2020, and now its third unit, its owners reported Monday. 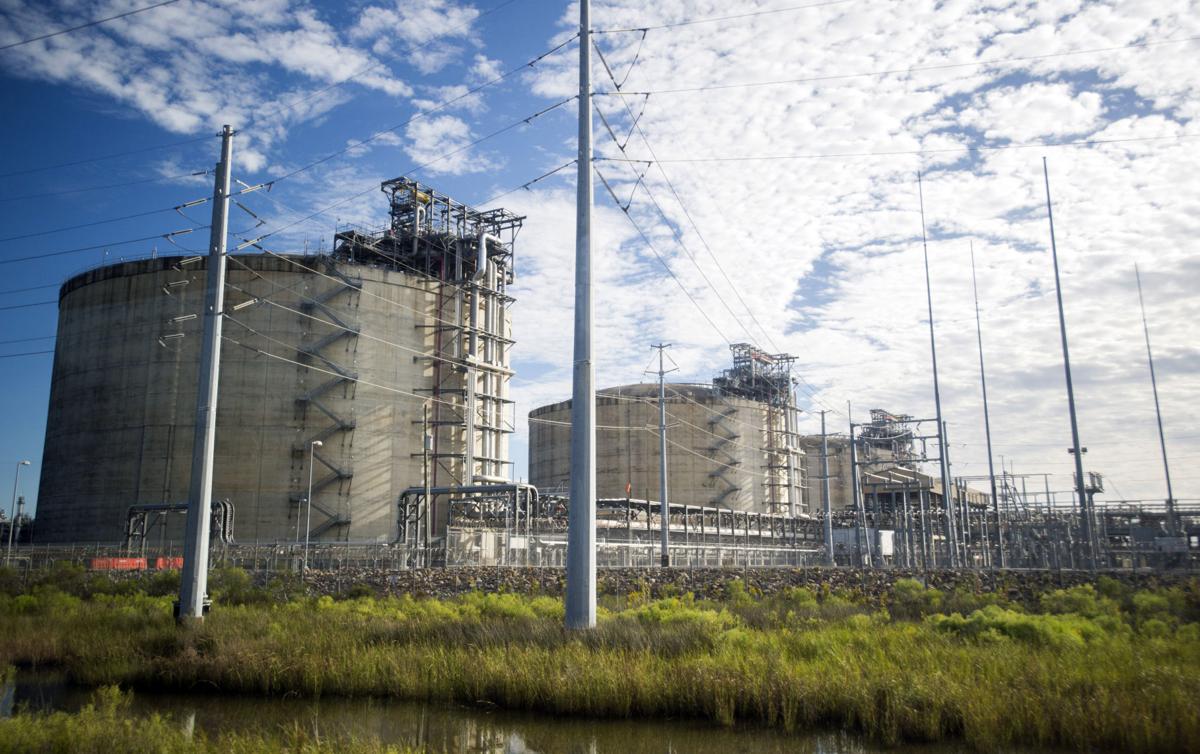 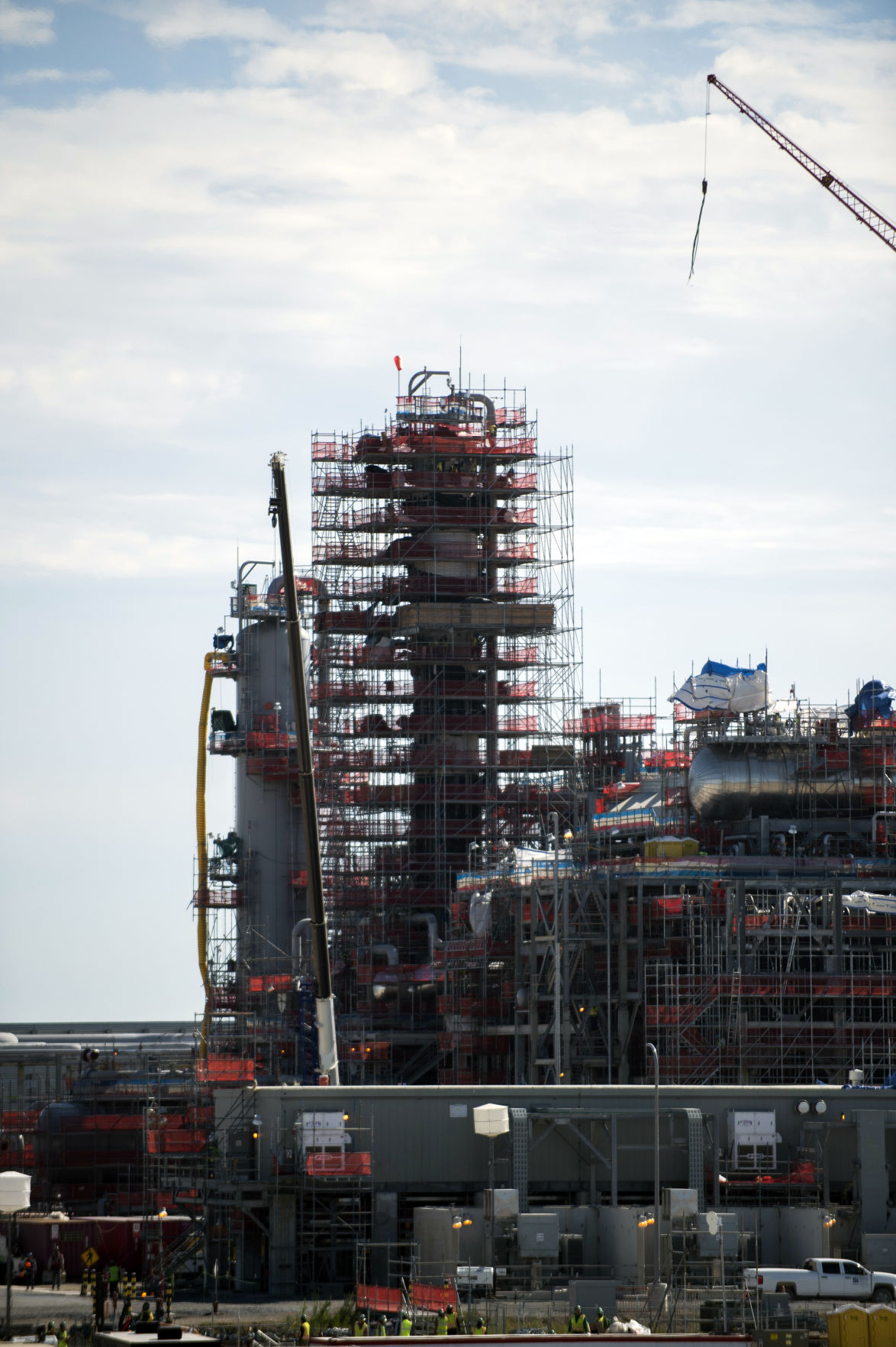 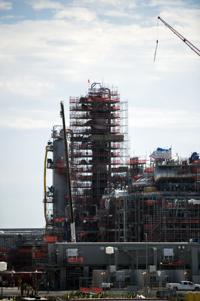 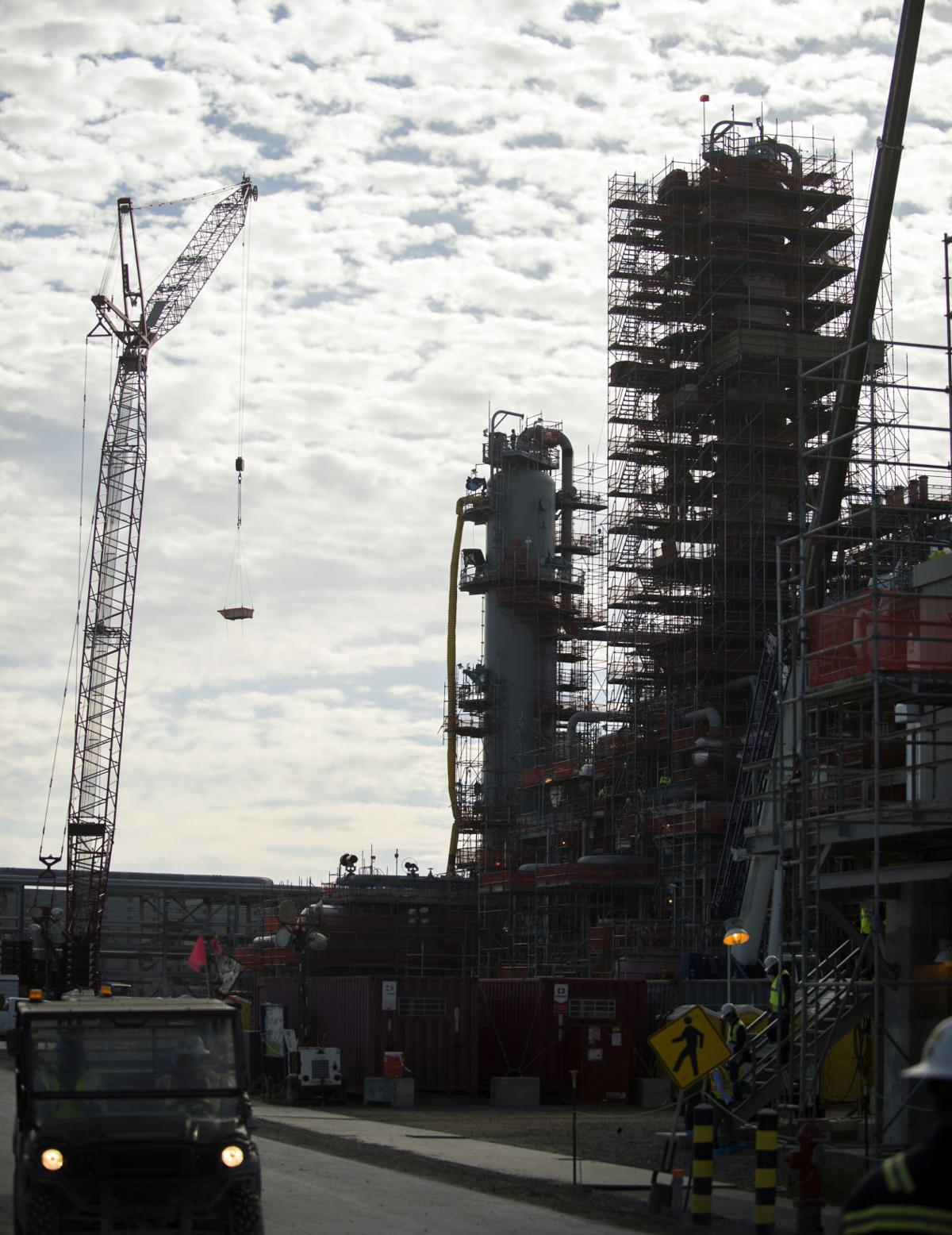 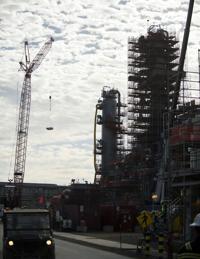 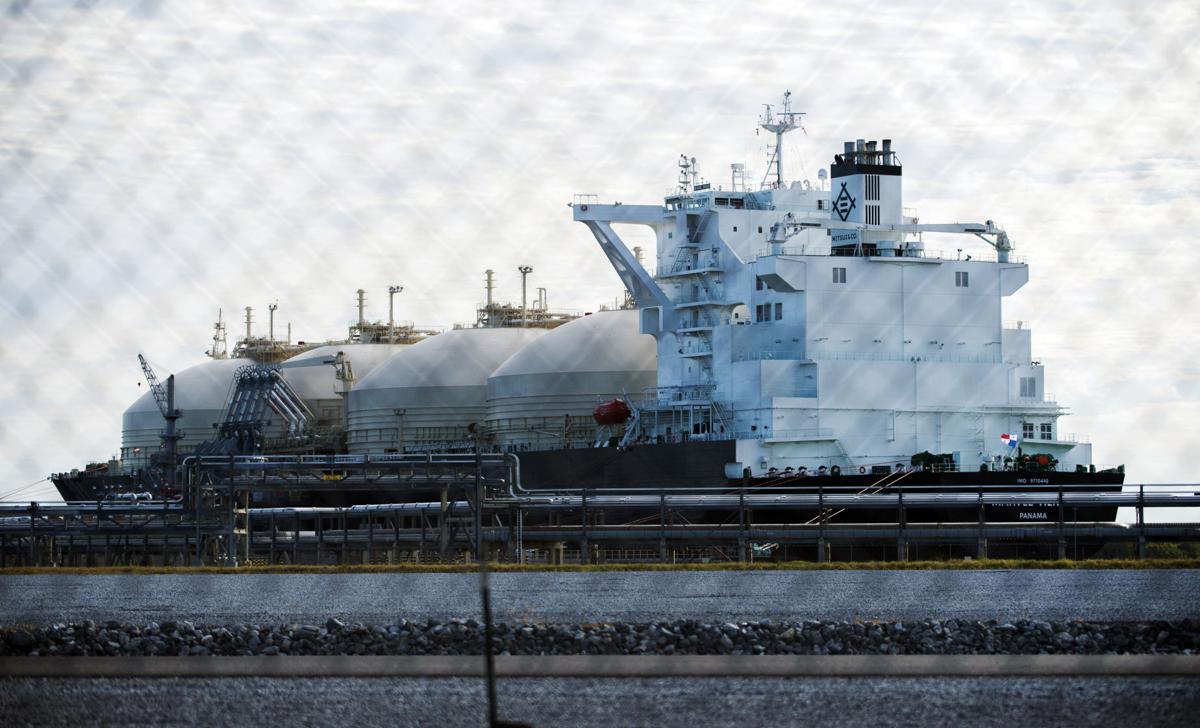 The Marvel Heron tanker vessel is seen docked during a dedication ceremony for the Cameron LNG liquefaction project in October 2019 near Hackberry. Cameron LNG achieved commercial operations with its first unit in August 2019 and second unit in February 2020, and now its third unit, its owners reported Monday.

A worker walks on the Cameron LNG property in October 2019 near Hackberry. Cameron LNG achieved commercial operations with its first unit in August 2019 and second unit in February 2020, and now its third unit, its owners reported Monday.

The Marvel Heron tanker vessel is seen docked during a dedication ceremony for the Cameron LNG liquefaction project in October 2019 near Hackberry. Cameron LNG achieved commercial operations with its first unit in August 2019 and second unit in February 2020, and now its third unit, its owners reported Monday.

Like seasoned partyers who turn to hair of the dog to cure a hangover, Louisiana legislators are asking voters this fall whether the solution to revenue shortages caused by major corporate giveaways is yet another tax break.

Despite its arcane wording and down-ballot positioning, proposed Constitutional Amendment 5 is lighting up the political advertising scene, social media and voter education initiatives across the state as early voters flock to the polls in record numbers. The initiative would allow local governments to negotiate property tax payments with manufacturers, for instance so that companies could make up-front payments to local governments in exchange for a long-term tax reduction.

“This is one of those issues that, it’s so in the weeds, most people don’t realize how profoundly it could impact them,” said Brian Eddington, the general counsel for the Louisiana Assessors’ Association, which strongly opposes the proposal.

For the first time in St. James Parish, all three governments that have a say in lucrative property tax exemptions for new industrial projects…

Some of the manufacturing companies that would reap the benefits of Amendment 5 already enjoy lucrative tax breaks thanks to the state’s Industrial Tax Exemption Program, known as ITEP, and in fact the proposal is being trumpeted as a solution to ITEP. That program allows manufacturing companies 80% property tax abatements for up to a decade, meaning huge new facilities don’t pay much in taxes, and Amendment 5 could allow local government to recoup a bit of that foregone revenue in exchange for giving up even more of it over the long haul.

The proposal’s sponsor, state Sen. Mark Abraham, R-Lake Charles, says he is championing Amendment 5 because he wants local governments to have resources they’ve been denied by ITEP. Cameron Parish, just south of Lake Charles, has been Exhibit A. Before it was ravaged by hurricanes this year, Cameron’s local government struggled to afford schools, roads and other infrastructure improvements thanks to industrial tax breaks so generous that the parish has recently been exempting roughly $700 million a year, about 10 times the amount of property taxes it was collecting.

Abraham argues that Amendment 5 could make up some of that short-term shortfall and thus help a parish like Cameron to build schools, libraries, roads and more. But the potential size of the back-end tax reductions for manufacturers and their long-term repercussions have prompted an outcry from opponents. The legislation that corresponds with the ballot initiative reads that any property subject to one of these agreements “shall be exempt from ad valorem taxation” throughout the agreement’s duration, which can last up to 25 years.

Special Report, Part II: Why this parish gov't is limping along despite multibillion-dollar industrial boom

In a marshy, quiet corner of southwest Louisiana, the residents of Cameron Parish are sitting on a gold mine, but they are unable to reap its …

The ballot initiative traces its roots to the lone example of a manufacturing company attempting to strike such a deal with a local government. Under a deal confected by Cameron LNG and the parish’s police jury in 2016, the manufacturing company would have avoided paying as much as $1.5 billion in property taxes starting in 2029 by paying just $500 million instead over two decades. Some, including Cameron LNG spokesperson Anya McInnis, dispute that the break would have been quite so massive, saying it didn’t account for the value of the upfront payments or the depreciation that would have reduced the company’s property tax burden in later years.

Regardless, the courts struck down the agreement between the police jury and Cameron LNG in 2017, after district and appellate judges ruled that the law requires property taxes to be tied to fair market values and cannot be arbitrarily assigned.

Legislators have been trying to pass a framework for local governments to strike similar deals since then. McInnis said Cameron LNG supports the measure, though she said the company had “no involvement” in getting it on the ballot, which required the approval of two-thirds of the Legislature. After four attempts, this was the first year the amendment made it to voters.

Together Louisiana's lead organizer Broderick Bagert sees the arguments about local governments receiving short-term windfalls and bad long-term deals as beside the point. The legislation does not say that manufacturing companies have to provide anything of value in exchange for negotiating their property taxes, and Bagert sees Amendment 5 as simply a corporate tax loophole in which government receives no benefit, not even in the short-term.

“There’s no mention of a public benefit," Bagert said. "That is what’s radical and new, not the fact that you can pay less in taxes over the long haul … One of the ways that it was passed was being able to make up an entirely fictional account of what the legislation does, and having no opportunity for citizens to counter it because citizens were under a lockdown order."

Abraham disagrees with that assessment of how the bill works, and also argued that local governments should have the ability to decide whether upfront cash infusions are worth a long-term deal in which they receive less money from future taxes. He said citizens have had plenty of opportunity to oppose the bill by lobbying their legislators over the phone and via email.

“It’s a trade-off,” Abraham said. “Would you believe that economic stimulus for a new road is worth it right now, compared to receiving it 10 years from now? Each local government, they decide. If they don’t believe it’s worth giving away the store, they won’t do it.”

Voters face no less than seven constitutional amendments on the Nov. 3 ballot. The following are the views of this newspaper’s editorial board…

Both sides say they are frustrated by the wording that appears on ballots, a jumble of bureaucratic jargon that asks voters if they support authorizing local governments “to enter into cooperative endeavor ad valorem tax exemption agreements with new or expanding manufacturing establishments for payments in lieu of taxes?”

Bagert sees the language as unnecessarily confusing and misleading. Abraham worries that people will interpret “payments in lieu of taxes” to mean that manufacturers won’t pay any taxes at all.

Political action committees opposing Amendment 5 have seized on the momentum against it, with a new PAC called Louisiana Taxpayer Education Fund sprinkling ads across television stations in Baton Rouge, New Orleans, Lafayette, Shreveport and elsewhere. The PAC is affiliated with the Louisiana Association of Educators, a teachers union, whose members are warning that the back-end tax reductions caused by Amendment 5 could starve public schools of long-term resources.

“In a region of the state that’s been recently hit hard by Hurricanes Laura and Delta, they can least afford to allow politicians to cut backroom deals on taxes for the most valuable property in the state,” said Mary-Patricia Wray, a consultant for Louisiana Taxpayer Education Fund.

Our Views: A national reminder of our state’s battle restoring Lake Charles area

For Nic Hunter, the young and relatively new mayor of Lake Charles, there is work aplenty. His city and the entire region of southwest Louisia…

Supporters of Amendment 5 don’t appear to have the same level of spending, advertising or PAC support. But they have gotten a boost from some in-state groups that wield political influence, including the Baton Rouge Area Chamber and Council for a Better Louisiana.

“If a local government wants to offer a business an exemption from its own local taxes to build a new project, why should the constitution forbid that?” the nonpartisan Council for a Better Louisiana wrote in its endorsement for the amendment.

How big is mail-in ballot voting in Louisiana in 2020? It's more popular than ever before

The 201,653 mail ballots requested statewide, so far, for the Nov. 3 presidential election is more than the total number of votes cast in Bato…

The left-leaning Louisiana Budget Project, though, argued that the state should have learned its lesson by now.

“If industrial property tax breaks were the key to a vibrant, thriving economy, Louisiana would be Silicon Valley,” the Louisiana Budget Project wrote in its election endorsements. “But it’s not, and this amendment would make a bad situation worse.”

Our Views: Amendments and a gambling proposition on Nov. 3 ballots

The views of this newspaper’s editorial board on the constitutional amendments and statewide propositions are presented yesterday and today. W…