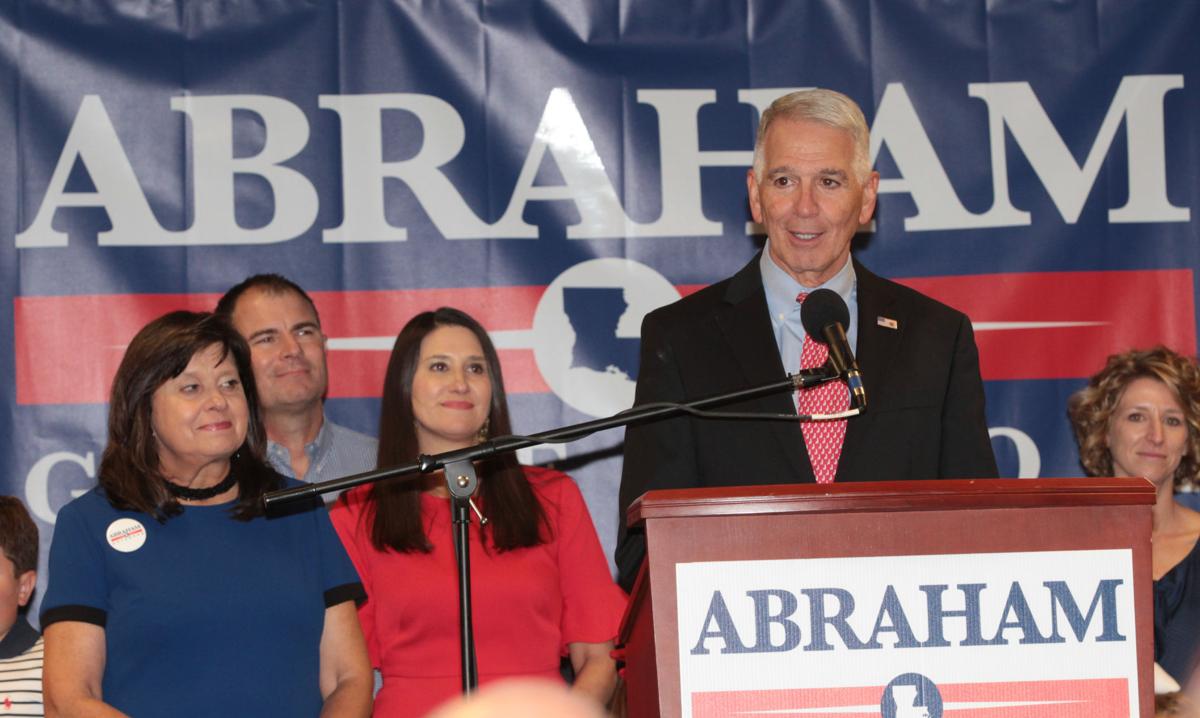 U.S. Rep. Ralph Abraham , Republican candidate for Louisiana Governor, concedes the race for Louisiana governor as his family gathers around him. He watched election results with his supporters at University of Louisiana at Monroe Library on Saturday. 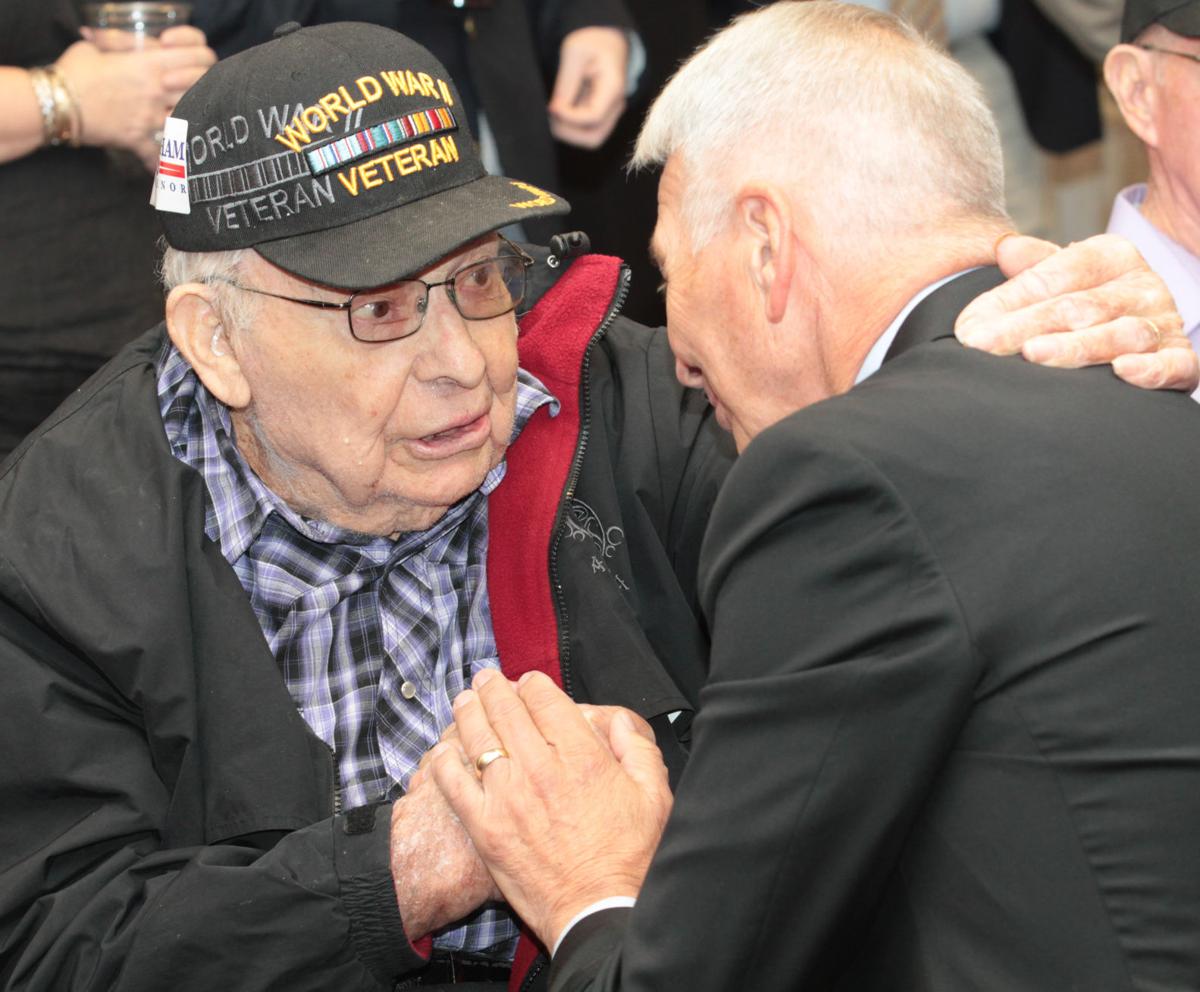 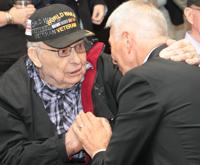 Johnny Willard of Monroe talks with U.S. Rep. Ralph Abraham as they await election results in the Louisiana Governor race at the University of Louisiana at Monroe Library on Saturday. Abraham is one of two Republicans challenging Democratic Gov. John Bel Edwards for the post. (Photo by Margaret Croft/The Advocate)

U.S. Rep. Ralph Abraham , Republican candidate for Louisiana Governor, concedes the race for Louisiana governor as his family gathers around him. He watched election results with his supporters at University of Louisiana at Monroe Library on Saturday.

Johnny Willard of Monroe talks with U.S. Rep. Ralph Abraham as they await election results in the Louisiana Governor race at the University of Louisiana at Monroe Library on Saturday. Abraham is one of two Republicans challenging Democratic Gov. John Bel Edwards for the post. (Photo by Margaret Croft/The Advocate)

MONROE – As Republicans Eddie Rispone and Ralph Abraham shared a stage with Donald Trump at a rally in Lake Charles on the night before Louisiana’s election for governor, the president gave them a simple directive: Don’t attack each other.

By then, it was too late.

Hobbled by a huge funding disadvantage and a blistering attack ad launched against him by his Republican opponent, Abraham conceded defeat in the governor’s race here late Saturday night, ending an at-times acrimonious open primary in which Abraham led his GOP challenger for months.

Yet despite the primary rancor between Abraham and Rispone, which Abraham dismissed as the “unfortunate part of politics,” he swiftly endorsed his fellow Republican in his Nov. 16 runoff election against Gov. John Bel Edwards, fulfilling a key wish of a GOP that is looking to unseat the only Democratic governor in the Deep South.

“You have to look at the big picture here,” Abraham said after delivering a brief concession speech. “Politics can be distasteful. But we're adults in the room. It's the end game that is important and we need to move our state, my state, to a better spot.”

Abraham, a two-term congressman whose district is based in the poorer, rural northeast corner of the state, was dramatically outspent by Rispone, who poured $11.5 million of his industrial construction fortune into his campaign, and had spent more than $10 million of it as of the latest campaign finance reports. Abraham, who doesn’t count a major financial center like New Orleans or Baton Rouge in his district, spent less than $3 million.

Several independent polls had shown Rispone, the co-founder of ISC Constructors, leapfrogging Abraham in recent weeks. Abraham’s advisers said he began sliding in the polls soon after Rispone launched an attack ad that accused him of being too friendly with Democratic U.S. House Speaker Nancy Pelosi and not loyal enough to Trump, among several other claims. In rallies across the state, Abraham exhorted voters not to buy into the ads, explaining the context of his votes with Pelosi, that Congress routinely votes on non-controversial items that win unanimous support from members.

On one level, Saturday’s gubernatorial primary was a referendum on Gov. John Bel Edwards. The question on the ballot was not a choice between …

But his campaign was unable to mount a sufficient defense on television. Abraham did launch his own TV ad in response, where he called Rispone a liar and desperate, which his campaign considers taking the high road compared to Rispone’s barbs. But the congressman was drowned out by Rispone's ads.

“At the end of the day, money matters in a campaign,” said Luke Letlow, a longtime aide and senior campaign advisor to Abraham. “We’re proud of what we did. We’re proud of being from Alto, Louisiana, the middle of nowhere, and getting as close as we got.”

Abraham spent much of the race training his focus on Edwards, whom he decried as a tax-and-spend liberal who has ruined Louisiana’s economy. He held mainstream Republican party positions on most issues and spent little time focusing on Rispone, a longtime GOP donor who started the race virtually unknown throughout the state before introducing himself as an outsider Trump candidate. Abraham traversed the state at a furious clip in recent weeks, flying his plane to dozens of small towns and cities for meet-and-greets and get-out-the-vote events, embracing retail politics and touting endorsements from as many Republican officials as he could.

Letlow said the campaign had a difficult time talking about the issues after Abraham came under attack. Both Rispone and Edwards’ allies like Gumbo PAC had targeted Abraham, blasting him for pledging not to collect his congressional salary but then taking it after one term.

Gov. John Bel Edwards is getting a last-minute boost to his get-out-the-vote efforts from former President Barack Obama, who recorded a robo-c…

Boysie Bollinger, a longtime GOP donor who led Abraham’s campaign finance team for part of the race, said Abraham got a good reception from donors he introduced him to. But Rispone’s millions in personal wealth was too much to overcome. Bollinger said he supports Rispone in the runoff and expects a windfall of donations from Republican corners to flow to his campaign.

The gap in funding between the two campaigns was evident at the two candidates’ election night parties Saturday. Rispone threw a higher-end affair at the L’Auberge Casino and Hotel in Baton Rouge, where he had an open bar and buffet. Abraham’s more humble gathering, in an event space at the University of Louisiana Monroe library, had soft drinks and pizza, along with a crowd that grew increasingly subdued throughout the night, turning their attention away from the election results and toward the LSU football game against Florida that was displayed on a projector screen.

“He was always underfunded,” pollster Bernie Pinsonat said recently. “He has never been able to overcome that.”

LAKE CHARLES — On the eve of Louisiana’s primary election that will decide whether Democratic Gov. John Bel Edwards will be forced into a Nove…

The attack ads did bring somewhat of a backlash to Rispone. U.S. Rep. Clay Higgins, R-Port Barré, became the only member of the Republican congressional delegation to choose sides, saying God directed him to endorse Abraham after Rispone launched his missive. Rispone had promised Higgins earlier in the race he would not go negative on a fellow Republican, Higgins said, as Republicans feared a similar scenario to 2015, when former U.S. Sen. David Vitter limped into a runoff after a primary where his Republican challengers blasted him endlessly.

“He made a promise,” Rainey said. “He said if he doesn’t win, he would endorse the person who does. And he did it without question, hesitation or reservation.”

Eddie Rispone won a spot in the runoff against Gov. John Bel Edwards; Trump may be the reason why