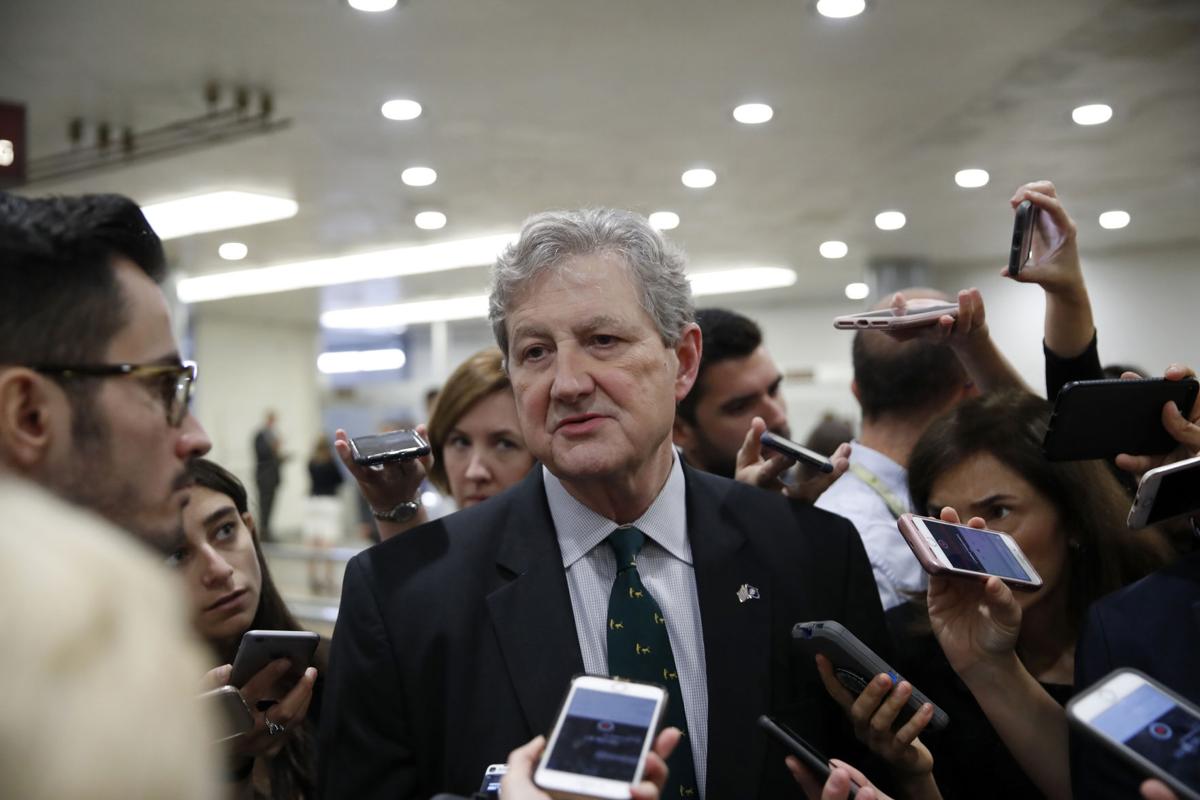 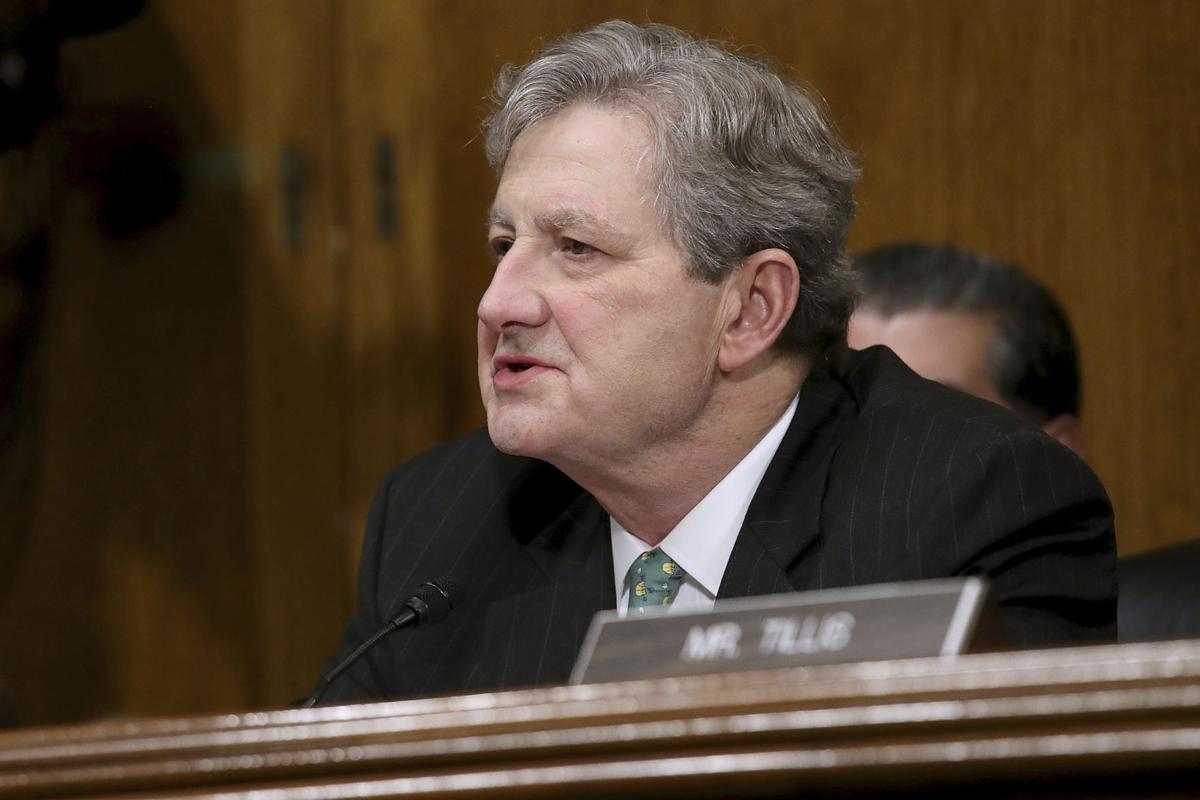 With the most prominent potential contender officially out of the race, Louisiana Republicans appear to be left without a well-known figure to challenge Gov. John Bel Edwards less than a year away from Election Day.

But several Republicans are still in the running or at least considering jumping in, including U.S. Rep. Ralph Abraham, state Sen. Sharon Hewitt and Baton Rouge businessman Eddie Rispone.

U.S. Sen. John Kennedy, after toying with a potential run for several months, announced Monday that he won't be on the ballot next year.

"I love being in the United States Senate," Kennedy, a senator since 2017, said in an early-morning written statement. "I will not be a candidate for governor in 2019. I will, however, continue to work hard every day in D.C. and Louisiana for jobs, economic growth, cheaper health insurance, a stronger military and an end to government waste."

The announcement touched off a wave of public statements and private speculation about what the future holds for the GOP in the coming year.

Kennedy's candidacy had seemed all but inevitable until recently, but last week he delayed his planned announcement.

Rispone, 69, is the only Republican to make a formal leap into the 2019 gubernatorial race so far, with more high-profile elected officials eschewing the opportunity to take on the only Democratic governor in the Deep South. State Attorney General Jeff Landry, U.S. House GOP Whip Steve Scalise, Lt. Gov. Billy Nungesser, U.S. Rep. Garret Graves and others have said they aren't going to run for governor, though they could change their minds before next year's qualifying deadline.

The election will be Oct. 12, with a Nov. 16 runoff if no candidate gets more than 50 percent of the vote in the primary. The qualifying period will be Aug. 6-8.

U.S. Sen. John Kennedy won't say if he is running for governor for a few more days, but he's already being hit with negative campaign ads.

“We’re glad Sen. Kennedy is going to continue representing Louisiana in the Senate and keep on helping President Trump make America great again," Rispone said in a statement. "We need him there. I’m a conservative outsider running against a liberal career politician. It’s time to unite the party around electing a conservative Republican. I love the people of Louisiana and I’m passionate about helping every one of our citizens reach their full potential.”

Meanwhile, Abraham, a Republican from Alto, said Monday his final decision will be coming "very soon."

“Louisiana needs a strong leader who can take on the challenges we face, and our great state just isn’t getting that with the current governor," said Abraham, 64. "There are several must-pass bills facing Congress in the next two weeks, and my focus right now is on my job.”

And Hewitt, a Slidell Republican, also has not ruled out a gubernatorial bid.

Louisiana governor's race considered 'top pick-up opportunity' for Republicans, but who is running?

U.S. Sen. John Kennedy is waiting at least a couple more weeks to say whether he will run for governor next year. But on a recent day in Denha…

"I’m still strongly considering a run for governor (and) continue to pray for God’s guidance on the best way to serve my community (and) help turnaround our great state," Hewitt, 60, said in a social media posting.

Abraham, who has represented Louisiana's 5th Congressional district in the northeastern corner of the state since 2015, has been hinting for months that he is interested in running for governor. A military veteran, Abraham is a doctor, veterinarian and pilot who still runs occasional missions for the U.S. Coast Guard. He was overwhelmingly re-elected to Congress earlier this year, after a campaign that had him running introductory ads throughout the state, and would not have to give up his seat to run for governor.

Hewitt, an engineer and former oil executive, is a first-term state senator who has served on the influential Senate Finance Committee and Joint Legislative Budget Committee, where she has frequently tussled with the Edwards administration over budget concerns and spending on the Medicaid program that the governor expanded by executive order shortly after taking office in 2016.

Maybe, as a Democrat, Gov. John Bel Edwards is for once expressing the deepest feelings of hardcore partisans in the Louisiana Republican Part…

Rispone, founder of industrial contracting company ISC Constructors, is making his first stab at elected office and is seen as a candidate in Donald Trump's vein -- someone who has a track record outside of government to build a campaign around rather than a political career. One of his top campaign consultants recently worked on the campaign of Bill Lee, a businessman who was just elected governor of Tennessee. Lee also was a political newcomer who fended off several Republicans with elected track records.

The Republican Governors Association has identified the Louisiana race as "a top pick-up opportunity for Republicans in 2019."

But many Republicans, burned by what they see as a fluke Edwards win three years ago in an otherwise reliably Republican state, have loudly called for the GOP to get behind one candidate. Edwards, 52, made it into a runoff race against Republican David Vitter in 2015 after Vitter and two other prominent Republicans bitterly campaigned against each other.

So what was that, U.S. Sen. John Kennedy’s months-long flirtation with a gubernatorial run not even halfway into his first U.S. Senate term, o…

Kennedy, who was state treasurer for nearly two decades and lost two previous attempts at becoming a U.S. senator, had recently taken to pointing to his own internal polling as proof that he was one of few Republicans who could defeat Edwards.

With his decision to stay in the Senate, Kennedy may have cracked the door for others to reconsider challenging Edwards.

Ladies and gentlemen, we finally have ourselves a governor’s race. Or more likely, we don’t, at least not much of one.

"For Sen. Kennedy, this was never about the people of Louisiana. This was about focusing the spotlight on himself," Edwards said. "There are more than 4.5 million good people who call Louisiana home. They deserve to have elected officials who will work together to put Louisiana first."

Edwards, a West Point graduate who previously served in the state House but was not widely known outside of the State Capitol before his gubernatorial run, has remained popular in most polls since taking office in January 2016.

But efforts to shore up the state's finances have included a sales tax hike that opponents will likely target.

“No matter who runs for governor there is no question our economy must be a priority with Louisiana ranking as one of the four worst states in unemployment.” Landry, who recently announced he will seek reelection as attorney general, said Monday.

A political adviser for Landry wouldn't explicitly reject the idea that Landry may reconsider running for governor instead of campaigning to hold onto his attorney general seat. But in a recent interview, Landry expressed particular fondness for his current role and duties and said he was comfortable removing himself from gubernatorial consideration even without a final decision from Kennedy.

Edwards, meanwhile, has defended his first term in office as trying to right a ship that had been struck by repeated budget crises and instability.

"The state and our people are much better off now than they were three years ago, and I look forward to another five years of putting the people of Louisiana first," he said.