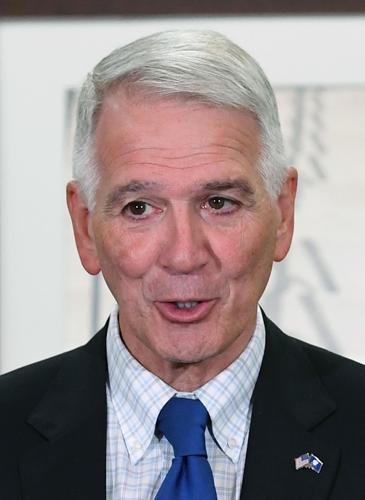 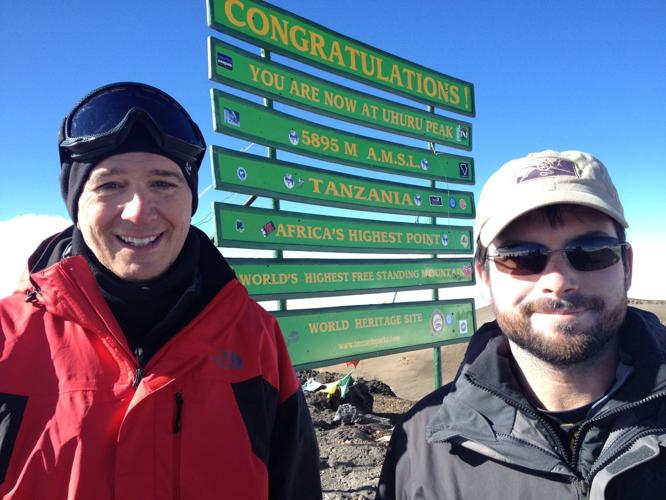 U.S. Rep. Ralph Abraham, R-Alto, and Dr. Wyche T. Coleman III, of Shreveport, at the summit of Mount Kilimanjaro in 2011.

U.S. Rep. Ralph Abraham, R-Alto, and Dr. Wyche T. Coleman III, of Shreveport, at the summit of Mount Kilimanjaro in 2011.

As a country doctor, Ralph Abraham has that easy-going “bedside manner.”

The north Louisiana congressman is far easier to talk to than the other two main candidates for governor in the Oct. 12 primary, says state Rep. Jack McFarland, a fellow Republican from nearby Jonesboro.

“It’s like talking to your neighbor over the fence,” McFarland said.

Despite having only about one-fifth the money as his Republican rival, U.S. Rep. Ralph Abraham is maintaining his position as the lead GOP cha…

Abraham, 65, turns full face with a smile to whomever he’s talking with, listens and responds to what is said rather than guiding the conversation to talking points.

On the campaign trail, Abraham describes himself as a conservative Christian who is against abortion, for gun rights and votes with President Donald Trump.

“We’ve got to incentivize business. We got to lower taxes. We got to improve our infrastructure,” Abraham says.

Like the other major gubernatorial candidates, he is scant on details about how to accomplish those goals. Abraham is facing five other candidates in an effort to unseat incumbent Democratic Gov. John Bel Edwards. Early voting begins 8:30 a.m. Saturday and continues until 6 p.m. next Saturday, Oct. 5.

John Bel Edwards’ rise from a small-town Democratic lawmaker to the most powerful figure in Louisiana represented a stunning political feat, b…

The other major Republican is Baton Rouge businessman Eddie Rispone, who is mostly funding his own campaign. While Rispone has the edge in money, Abraham has the backing of most of the state’s Republican parish executive committees.

Abraham grew up on a farm in Richland Parish and still lives in the same spot near Alto, a crossroads out in the country, though the house has been dramatically upgraded. Soybeans, corn and cotton are within sight of the porch.

Abraham Farms, which he valued at between $1 million and $5 million in his congressional financial disclosures, has about 2,200 acres with three homes, including his own. He also owns a one-bedroom condo overlooking the Gulf of Mexico at Fort Walton Beach.

Then, in 1990, he became the oldest student at LSU Medical School in Shreveport, returning home on weekends to handle his veterinarian duties.

Country doctors don’t really adhere to a strict appointment schedule the way most city doctors do. Abraham's clinic was open to walk-ins. He would start seeing patients at 6 a.m. and wouldn’t come home until everyone was seen, often after 9 p.m.

In 2014 Abraham ran for Congress, and beat Democrat Jamie Mayo in a runoff. In Washington, Abraham has naturally gravitated to military and the agricultural issues important to the state.

“I still have a hard time calling him congressman. He’s Dr. Abraham to me,” said Scott Franklin, of Richland Parish. Abraham was the family’s doctor. Even after going to Washington, Abraham would phone and check on Franklin’s ailing grandparents, he said.

Franklin now runs a rice dryer in Richland Parish, acting as a broker for the crops on land near the bayou and rivers that tend to flood. For a long time, he had been trying to enlist state and federal officials to join his quest to open the Iraqi market, which buys nearly 1.4 million tons of rice annually. Mostly, he says, he got “Staff is working on it” and no action.

When Abraham arrived in Washington in January 2015, the congressman befriended Iraqi trade and embassy officials and wrote letters. The lobbying worked, and in 2017, Iraq bought U.S. rice. Subsequent orders have increased to 120,000 metric tons.

“It was all about the personal connection,” said Franklin, adding that Louisiana mills that once closed for the summer now operate year-round.

Before getting bitten by the gubernatorial bug, Abraham was among the most diligent congressmen, voting nearly every chance he could. Now his opponents have attacked him for having the worst congressional voting record.

From April to September 2018, before he announced his run for governor, he missed no votes in the U.S. House. Between April and June of this year, Abraham skipped 55.4 percent of the votes, and from July to now, he has missed 47.5 percent of the votes on the House floor. He missed votes on appropriations, on a resolution supporting Israel, and to incrementally increase the minimum wage to $15 in six years.

The Abraham campaign's response is that beating Edwards is more important. John Vick, his campaign manager, said Abraham has been in constant contact with U.S. House Minority Whip Steve Scalise, R-Jefferson, who is in charge of corralling Republican lawmakers for votes, to ensure the congressman returns in time for the most important votes.

Abraham's votes rank him among the most conservative members in the U.S. House, according GovTracker.

He made it back to Washington to vote against the Bipartisan Budget Act and the Humanitarian Standards for Individuals in Customs and Border Protection Custody Act. He also was there to support the president by voting against resolutions condemning Trump for making racist comments about women of color in Congress.

Abraham is a secure vote for other conservative groups, including Americans for Prosperity, and the Eagle Forum and Campaign for Working Families. He also has the approval of business lobbying groups, including the Coalition of Franchisee Associations, American Builders & Contractors and The U.S. Chamber of Commerce.

He rarely, if ever, backs positions held by liberal groups, such as the National Education Association, the Alliance for Retired Americans, the NAACP and the American Civil Liberties Union.

But Abraham was the only Republican in the Louisiana congressional delegation who dared to criticize Trump about four weeks before the 2016 presidential election after a 2005 video surfaced that recorded the candidate bragging about groping women and getting away with it because he was star.

"Donald Trump's comments are offensive and indefensible," Abraham said hours after the tape was made public. "I would never want either of my daughters or my granddaughters spoken about or treated in that way. He was right to apologize for his remarks, but at this point, he should strongly consider his path going forward. Hillary Clinton has proven over her 30-year political career of destructive policies and poor judgement that she is unfit for the White House. She cannot be allowed to win the presidency, so Mr. Trump should consider whether he needs to step aside and allow Gov. (Mike) Pence to lead our party to victory in November for the good of the country."

A new poll in the Louisiana governor’s race shows a shakeup among the Republican candidates, with businessman Eddie Rispone surging ahead of C…

His comments came back to haunt Abraham a few weeks ago when Rispone released a commercial referring to those comments and attacking the congressman for not being supportive enough of Trump.

"Typical politician Ralph Abraham," the narrator says in the ad. "He just doesn't work for Louisiana."

Rispone is running as an outsider. But until 2014, Abraham had never run for public office.

A longtime friend, Dr. Wyche T. Coleman III, recalls the first political talk he heard from Abraham was during a 2011 climb to the summit of Mount Kilimanjaro in Tanzania.

An ophthalmologist in Shreveport, Coleman roomed with Abraham’s son in medical school and often bunked with the elder Abrahams in Alto while doing his residency in Monroe. Their habit was to eat at the Waterfront Grill in Monroe every Wednesday night.

Coleman had been reading a book about climbing Mount Kilimanjaro. He mentioned he’d love to do that, and asked Abraham if he wanted to go along.

“He said yes and went back to eating. We didn’t talk about it much more until we arrived in Africa,” Coleman recalled. “But that’s the way he is. He doesn’t back down from challenges and he doesn’t need to talk too much about it. Just do it.”

At nights during the 10-day ascent, the group held wide-ranging political discussions over dinner. All political persuasions were represented, Coleman said: a New York liberal, a married gay man, a moderate air show pilot, a Libertarian, and Abraham, a Republican.

“On that trip, Ralph wasn’t talking about running for office. But we were talking about that if you don’t like the direction things were going, you should get in the mix and not just talk,“ Coleman said, adding that they reached the summit easily. “He felt the country was heading the wrong direction and he wanted to nudge in the right direction.”