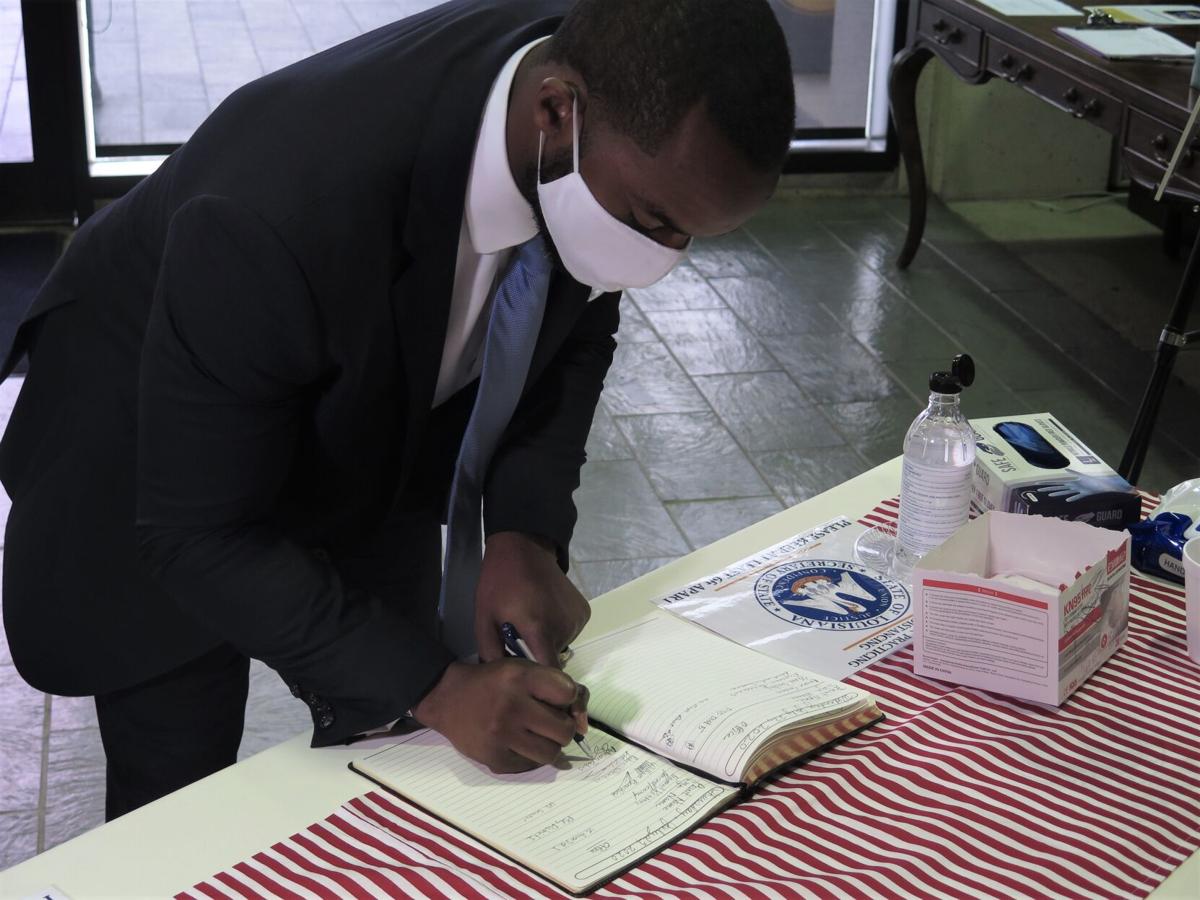 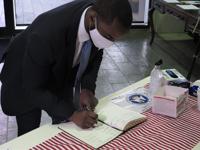 Shreveport Mayor Adrian Perkins, a Democrat, arrived in Baton Rouge to qualify for a run for U.S. Senate against Republican incumbent Bill Cassidy. The second day of qualifying was on Thursday, July 23, 2020. 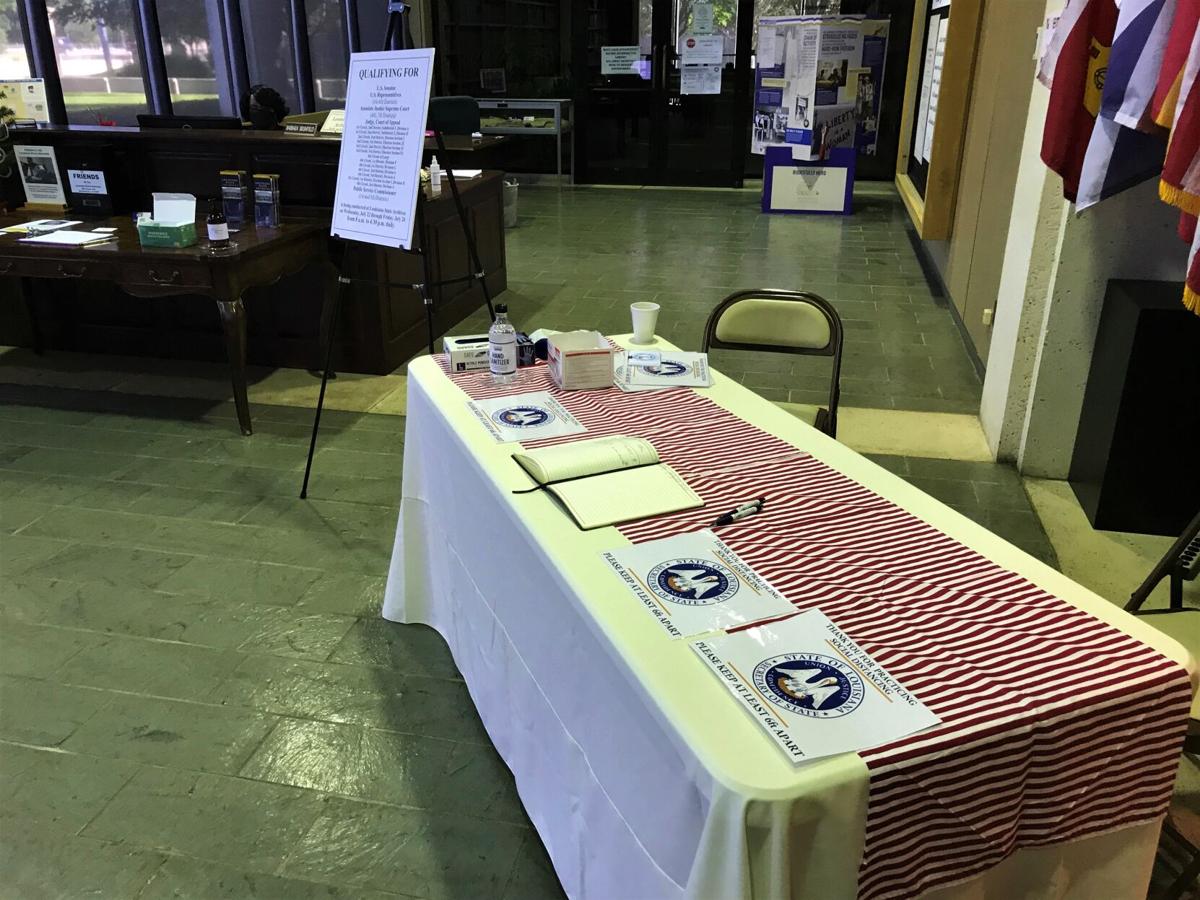 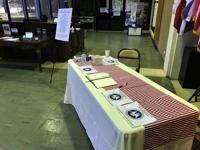 Qualifying for the Nov. 3 elections goes into the second of three days on Thursday, July 23, 2020. Wednesday, the first day, was fairly busy. The second day not so much. 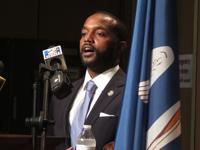 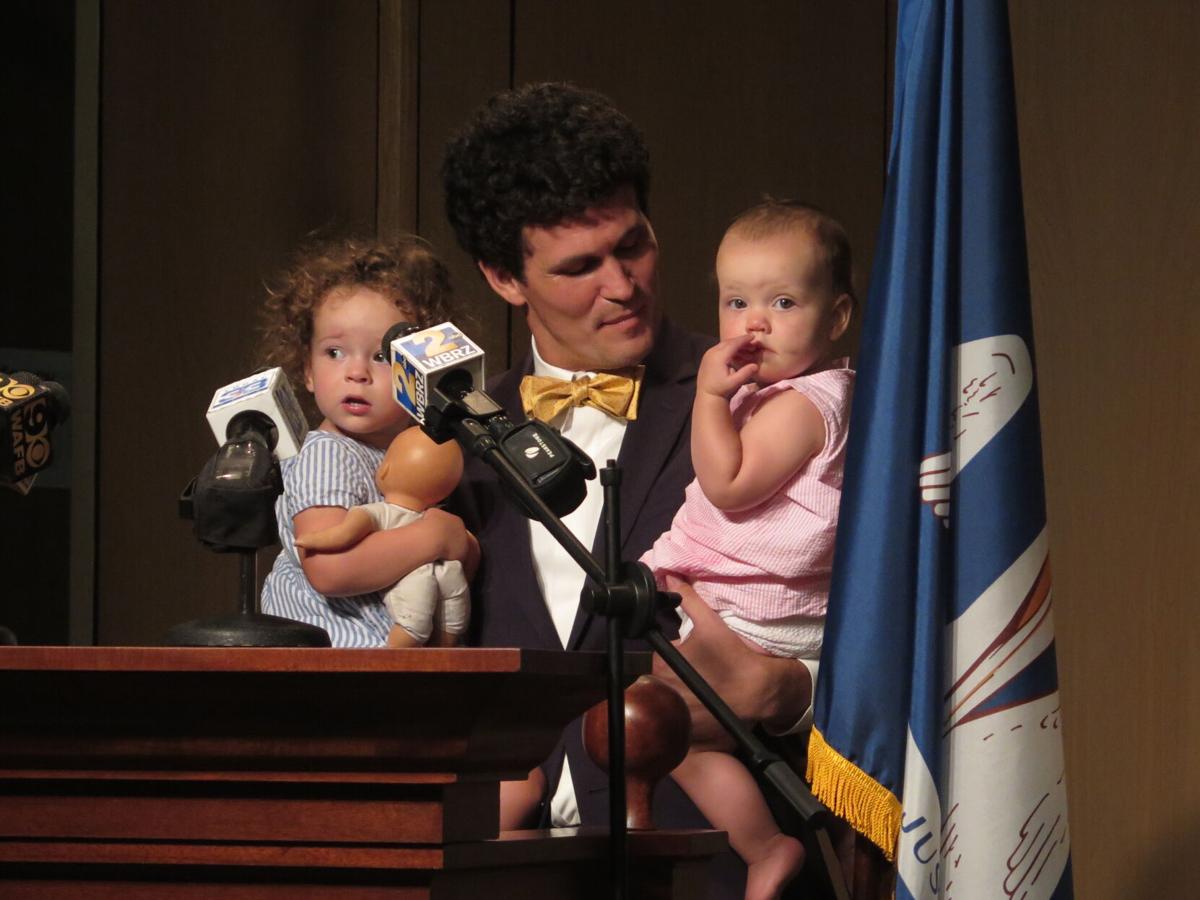 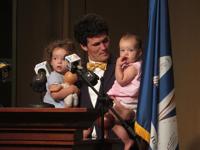 New Orleans math teacher Peter Wenstrup holds his children Hope and Grace in announcing his run for the U.S. Senate on Thursday, July 23, 2020.

Shreveport Mayor Adrian Perkins, a Democrat, arrived in Baton Rouge to qualify for a run for U.S. Senate against Republican incumbent Bill Cassidy. The second day of qualifying was on Thursday, July 23, 2020.

Qualifying for the Nov. 3 elections goes into the second of three days on Thursday, July 23, 2020. Wednesday, the first day, was fairly busy. The second day not so much.

New Orleans math teacher Peter Wenstrup holds his children Hope and Grace in announcing his run for the U.S. Senate on Thursday, July 23, 2020.

Only a dozen candidates signed up Thursday at the Secretary of State's Office to run in the November elections, but six of them are running against U.S. Sen. Bill Cassidy, including an elected Democratic official.

Cassidy had no formidable opponents for months in what is expected to be an easy win for an incumbent Republican in a state that has elected only one Democrat statewide, Gov. John Bel Edwards, in the past decade. Cassidy plans to qualify for reelection Friday morning.

Candidate qualifying, which began Wednesday, continues until 4:30 p.m. Friday. State candidates are filing the documentation and paying the fees at the State Archives building in Baton Rouge. Local candidates sign up in their parish.

On Wednesday, 368 candidates qualified to get their names in the Nov. 3 election.

At the top of the ballot is the reelection of President Donald Trump, a Republican whose main rival presumably will be the Democratic former Vice President Joe Biden.

Perkins is the only elected official to challenge Cassidy, so far. A West Point grad with combat experience, he received endorsements from national Democrats, including U.S. Sen. Cory Booker, of New Jersey, and former presidential candidate Pete Buttigieg, the former mayor of South Bend, Indiana.

No African-American has won a statewide election since 1887, at the end of Reconstruction. And Perkins is only the seventh Democratic elected official to run for an office elected statewide in the past decade, which saw three gubernatorial, three U.S. Senate, and more than 20 races for state agency heads, like Attorney General.

Other than Mary Landrieu, the incumbent Cassidy beat in 2014, the only elected Democrats to run against Republicans in statewide contests since 2010 have been Foster Campbell, for U.S. Senate in 2016; Edwards and Kip Holden, for governor and lieutenant governor respectively in 2015; and Charlie Melancon and Butch Gautreaux in 2010. Edwards is the only winner in that krewe.

Perkins grew up in the high crime, lower income Cedar Grove neighborhood of Shreveport. His father abandoned the family when the 34-year-old was a toddler. But his mother valued education and the church. After graduating the U.S. Military Academy at West Point, Perkins led soldiers in combat situations in Iraq and Afghanistan. He later graduated from Harvard Law School.

He had no intention, as late as a few months ago, to run for another office, Perkins said. But he said he was persuaded during pandemic after seeing his constituents lose their jobs and the federal government's somewhat befuddled response. He spoke to Democratic Party leadership both in Louisiana and nationwide before deciding.

"We will be able to generate enough resources to make this an extremely competitive race,” Perkins said. “I understand the odds, but we cannot afford to give Sen. Cassidy another chance on providing what we desperately need provided in Louisiana. This is a chance to choose a new road.”

Perkins had the highest profile of the six candidates filing Thursday for the U.S. Senate race.

Peter Wenstrup, a math teacher in New Orleans, brought his two toddlers with him as he signed up to challenge Cassidy as a Democrat.

“We’ve seen that during this pandemic, as small business owners, nurses, teachers, food service employees, and supply chain workers have improvised to find real solutions,” he said. “It’s about time we elect leaders who understand this.”

Libertarian Dr. Aaron Sigler, a neurosurgeon from Hammond, also made his first bid for public office upon signing up Thursday.

“The main thing, I think we can all agree, is that this country has been very divided lately, very polarized. In order to break that polarization, people deserve a real option,” he said.

Retired school teacher Reno Jean Daret, No Party-Metairie, is running to give credibility to the ideas he wants to see America implement, such as requiring everyone to show identification in order to make purchases to control undocumented immigration, and to concentrate convicted criminal inmates in a camp instead of prisons around the state to lower incarceration costs.

Beryl Billiot, No Party-Kentwood, ran against Cassidy six years ago on a promise of not taking contributions. That changed Thursday, he said, because last time Billiot was precluded from participating in televised debates, which drew a line allowing only candidates who had raised $1 million or more to participate. He said he had saved money, arranged for funders, solicited contributions, and planned to hit that mark soon.

The five representatives of the U.S. House seeking reelection all sent proxies to deliver the forms and money to the Secretary of State’s Archives building. All five incumbents drew opponents. Few of those congressional races are expected to attract much attention. The one most likely to be competitive is Acadiana’s U.S. Rep. Clay Higgins, R-Lafayette, whose Democratic opponent, Rob Anderson, an oilfield driller and writer running from Sulphur, has attracted national attention.

Many appellate courts also are on the ballot. And hundreds of local offices are up for election. Baton Rouge is electing a mayor-president and Metro Council. New Orleans is picking a school board.