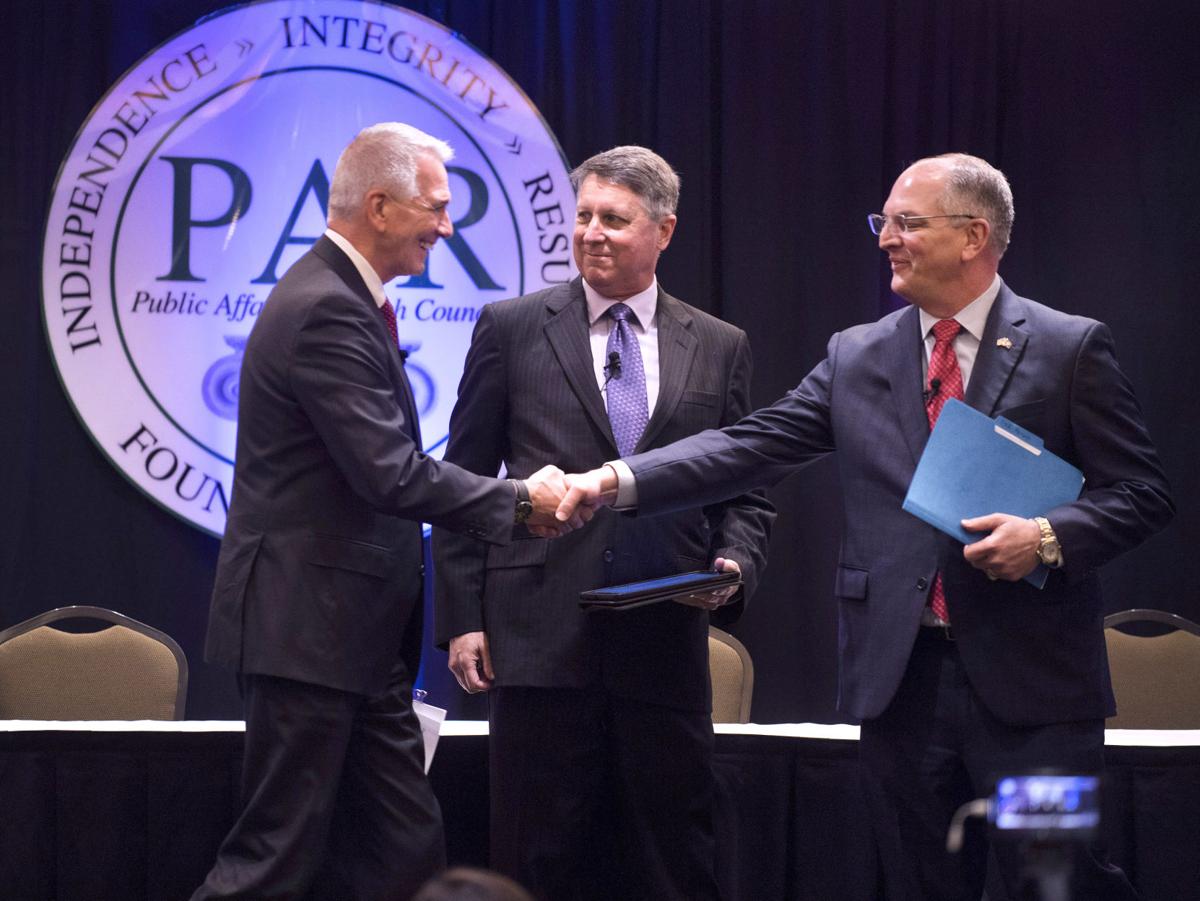 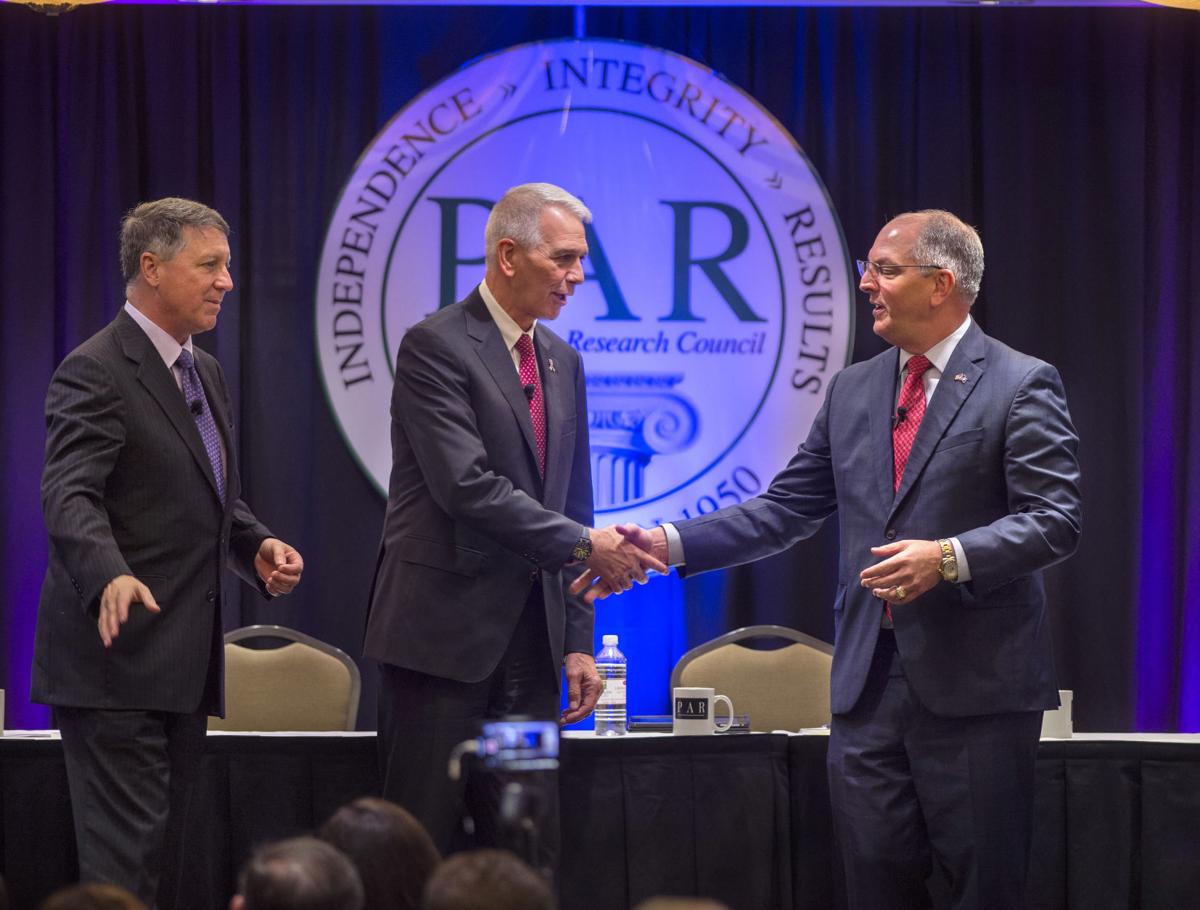 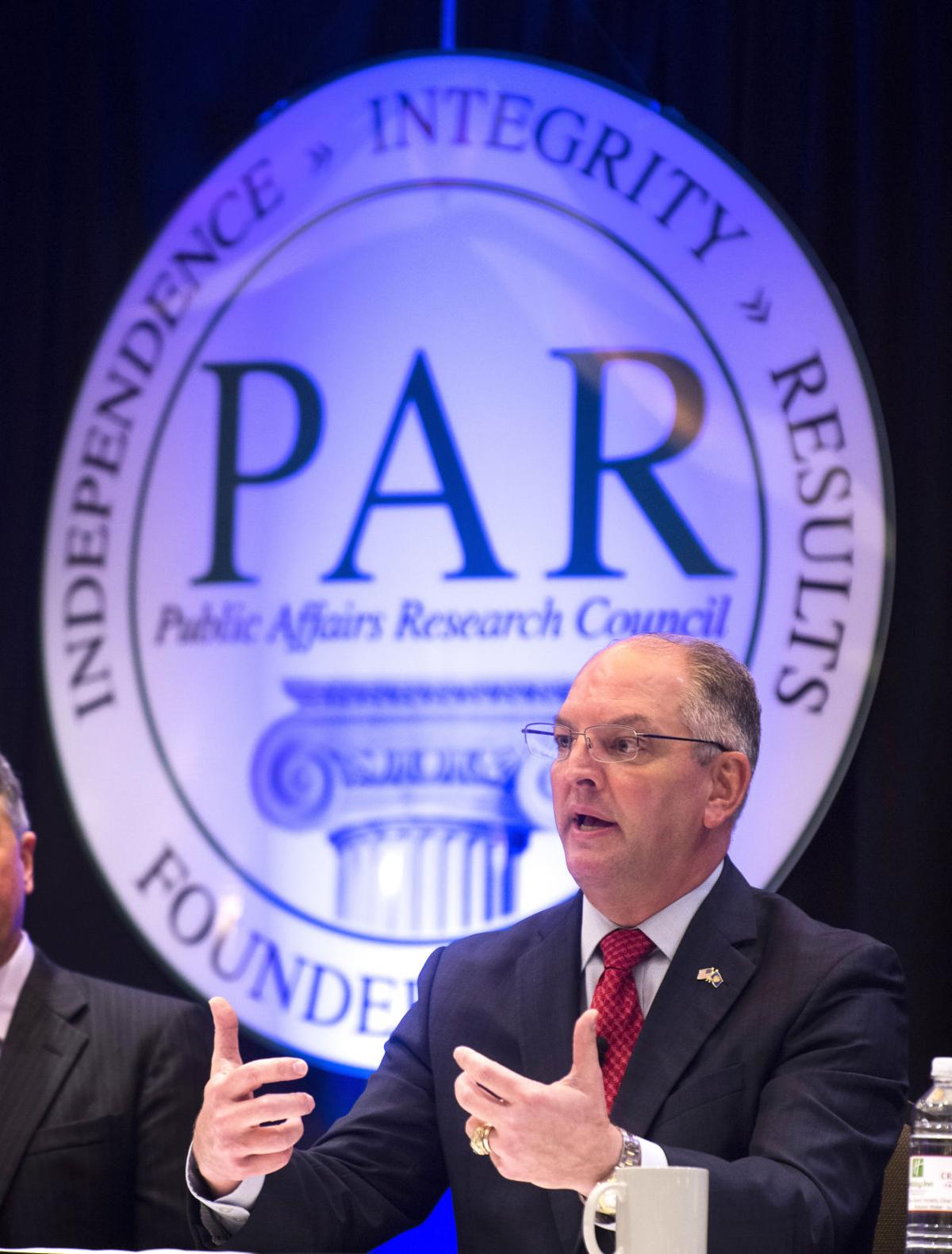 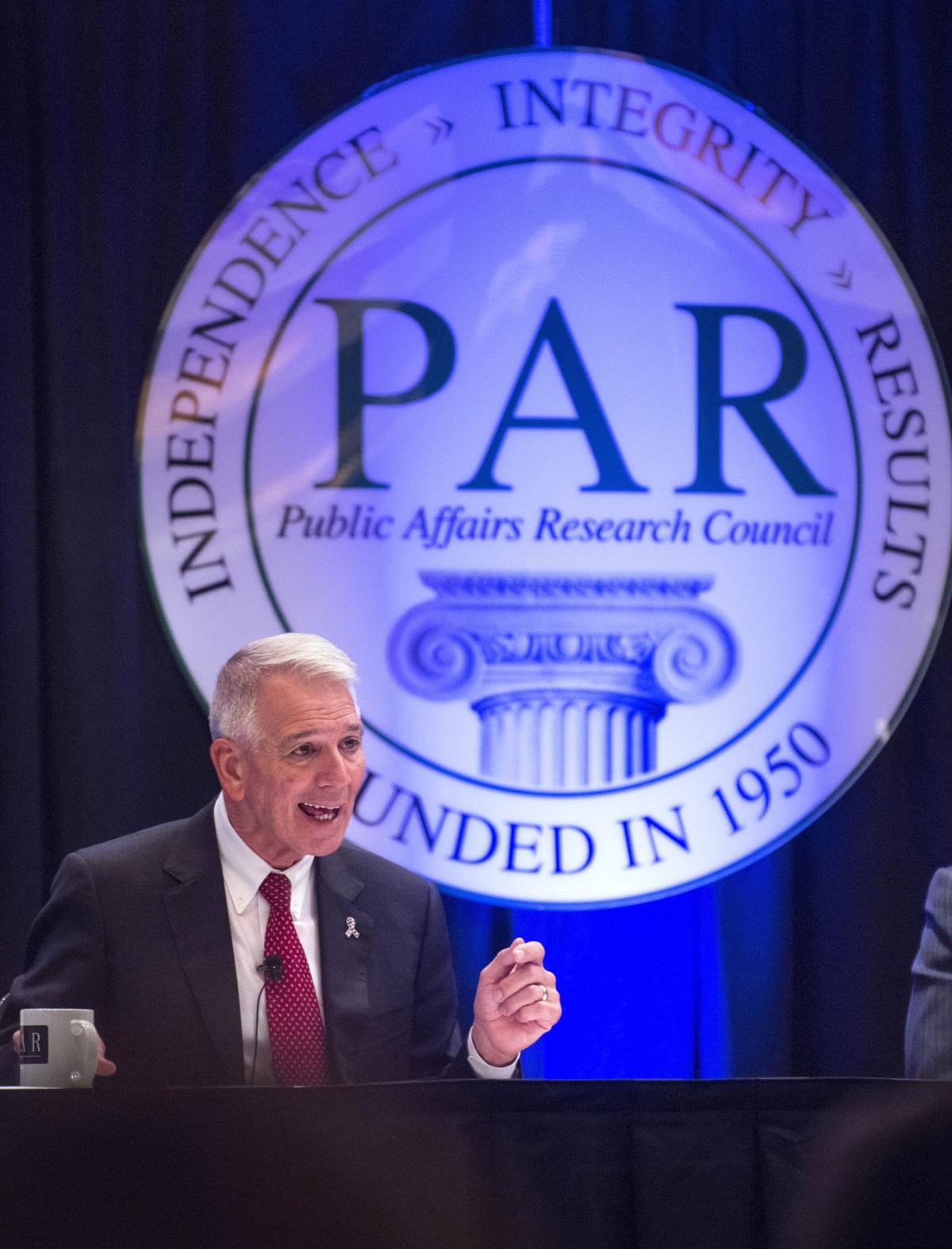 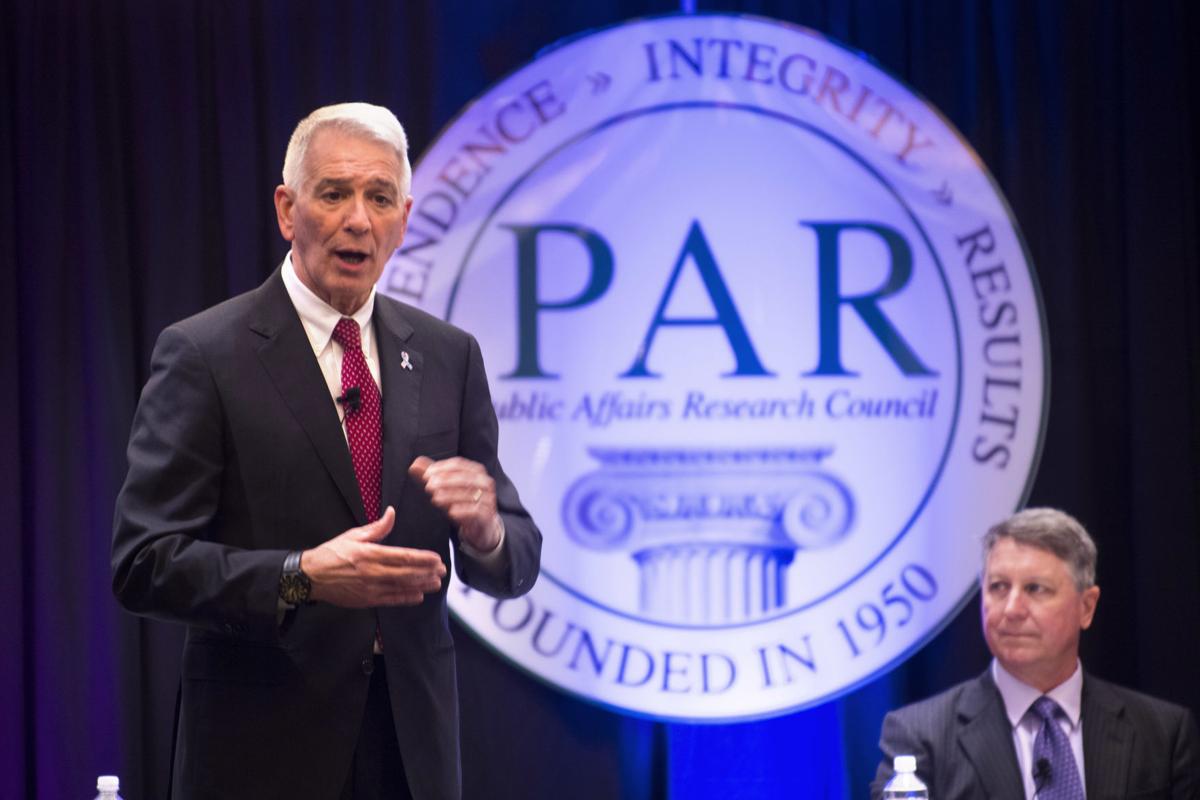 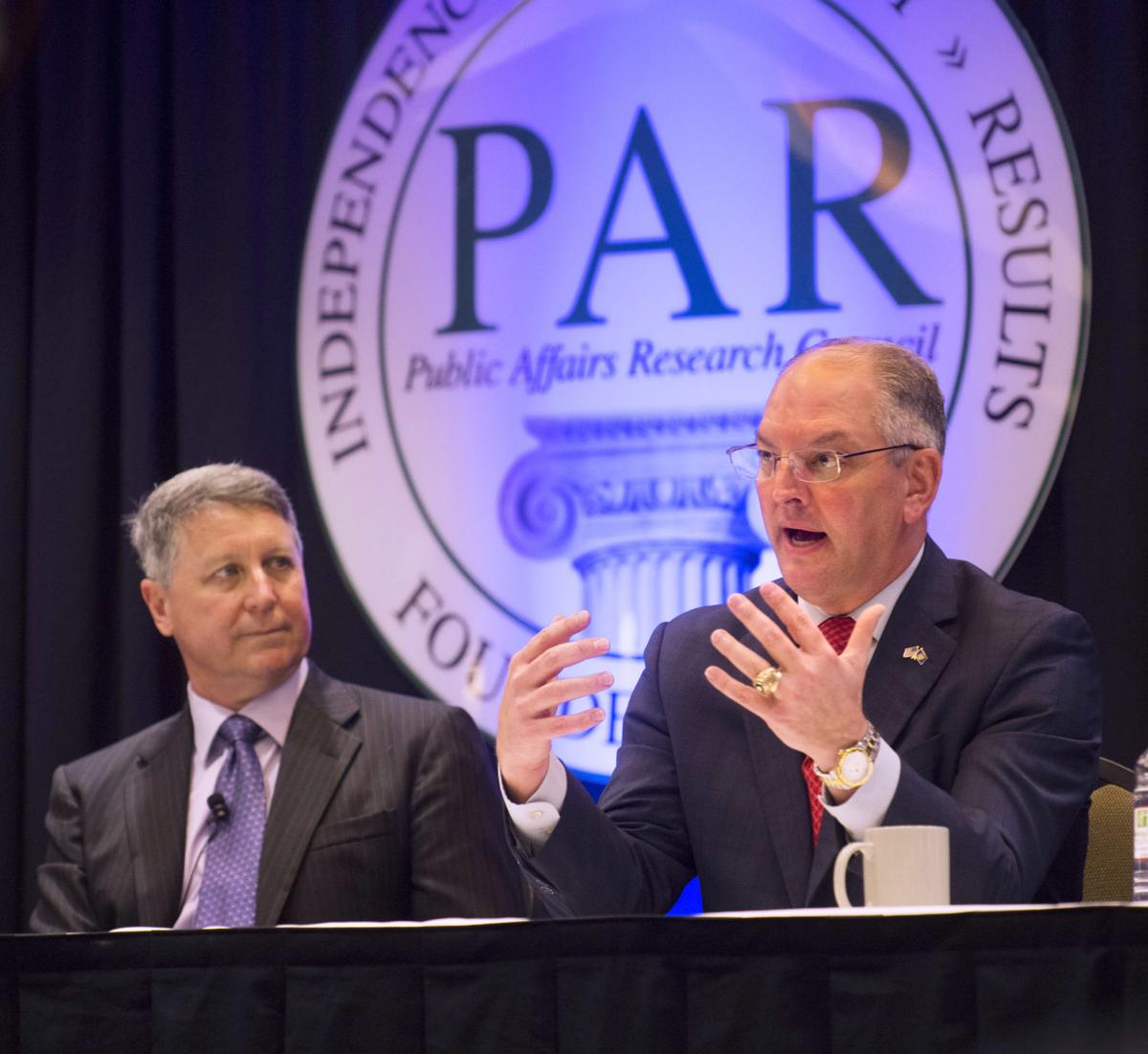 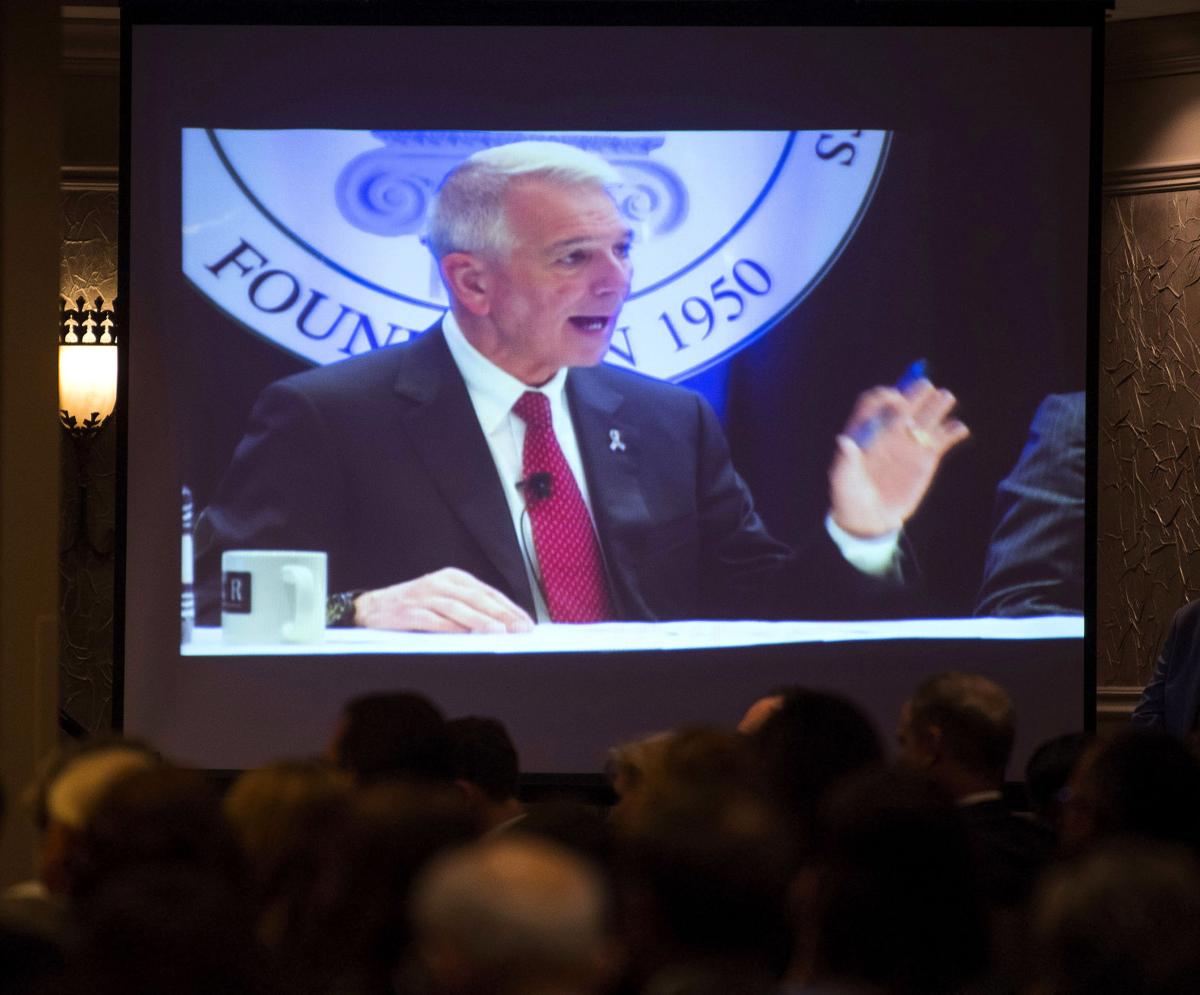 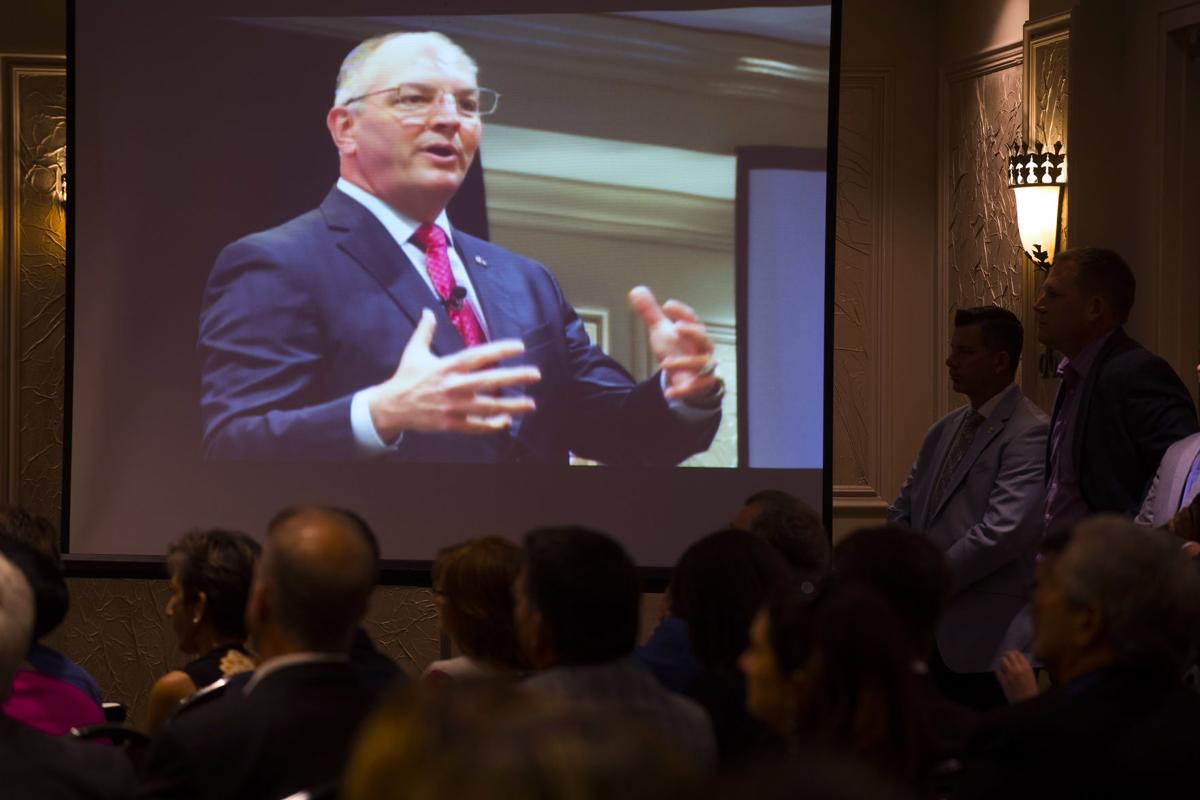 Gov. John Bel Edwards faced one of his Republican gubernatorial challengers for the first time Thursday, squaring off with Congressman Ralph Abraham in a policy-focused forum that touched on health care, infrastructure and taxes.

Edwards, who is running for reelection as the only incumbent Democratic governor in the Deep South, painted the state in a better light than when he took office, contrasting a roughly $300 million budget surplus from the previous fiscal year with the $2 billion deficit he inherited when taking office.

The Public Affairs Research Council of Louisiana, a nonpartisan think tank based in Baton Rouge, hosted the forum as part of its annual event. Edwards also addressed a luncheon crowd, where he touted his push for a pay raise for school teachers, before facing Abraham in the first in-person meeting between the two on the campaign trail.

Eddie Rispone, the other major GOP candidate in the race, did not attend, citing prior engagements. His campaign spokesman Anthony Ramirez said he was "on the road today with events in Lafayette and Natchitoches."

The two candidates in attendance presented starkly different pictures of the current state of Louisiana. Edwards said an Abraham governorship would bring the state back to the days of former Gov. Bobby Jindal, which he termed a “disaster.”

Abraham, a physician, described himself multiple times as a “country doctor,” something he said informs his positions on early childcare education and Medicaid.

The congressman attacked Edwards for raising taxes, calling the state’s current budget surplus “someone else’s money,” and criticizing the governor as driving business and residents away from the state.

He staked out few specific policy positions, though he did call for ending the state’s franchise tax and passing a bill filed by state Rep. Kirk Talbot, R-River Ridge, aimed at lowering car insurance rates. Abraham said generally the state should be friendlier to business, have a simpler tax code and re-prioritize spending to funnel more money to things like early childhood education.

The governor himself went on the offensive at times. On the issue of early childhood education, after Abraham suggested the governor did not put funding toward it in his budget proposal, Edwards said, “you’re just entirely wrong.”

“The state budget proposal I submitted to the Legislature maintains the state effort from last year for early childhood education,” Edwards said, adding the state is missing an $8.8 million federal grant that wasn’t renewed. “So it’s the federal dollars we don’t have. And as a Congressman I would expect you to know that.”

The governor also took shots at Abraham for voting to end Medicaid expansion, and defended his position to expand the program, citing its economic impact.

Abraham indicated he would not end Medicaid expansion, a policy that an LSU poll released Thursday showed is widely popular in Louisiana. But he chastised the administration’s handling of the program and said he would make sure the state is not spending taxpayer money on people who are not eligible for it. He also highlighted the program's growing costs.

The two did agree that they would each protect coastal funding from being raided by the Legislature if elected, and both said they wanted the redistricting process in 2020 to be fairer.

The event was the first opportunity to evaluate the candidates at a debate-like setting as the campaign gears up ahead of an Oct. 12 primary. If no candidate wins more than 50 percent of the vote during the primary, the two top vote-getters will face one another in a runoff Nov. 16.

Edwards has amassed a $10.2 million war chest for his bid for reelection, his campaign announced this week, putting him ahead of the $9.5 million Jindal had raised during his 2011 bid. Rispone’s campaign said he will report a $10.4 million war chest when campaign finance reports come due next week, though most of that is loaned from his personal bank account.

Abraham is trailing the two candidates in the fundraising race, with his campaign saying previously he will report more than $1 million raised in the next filing. He also rolled out a list of 100 endorsements this week, mostly small-town officials and two state lawmakers, state Reps. Jay Morris, R-Monroe, and Paul Hollis, R-Covington.

At the annual meeting of the Public Affairs Research Council Thursday, a Republican challenger to Gov. John Bel Edwards was primed during a fo…