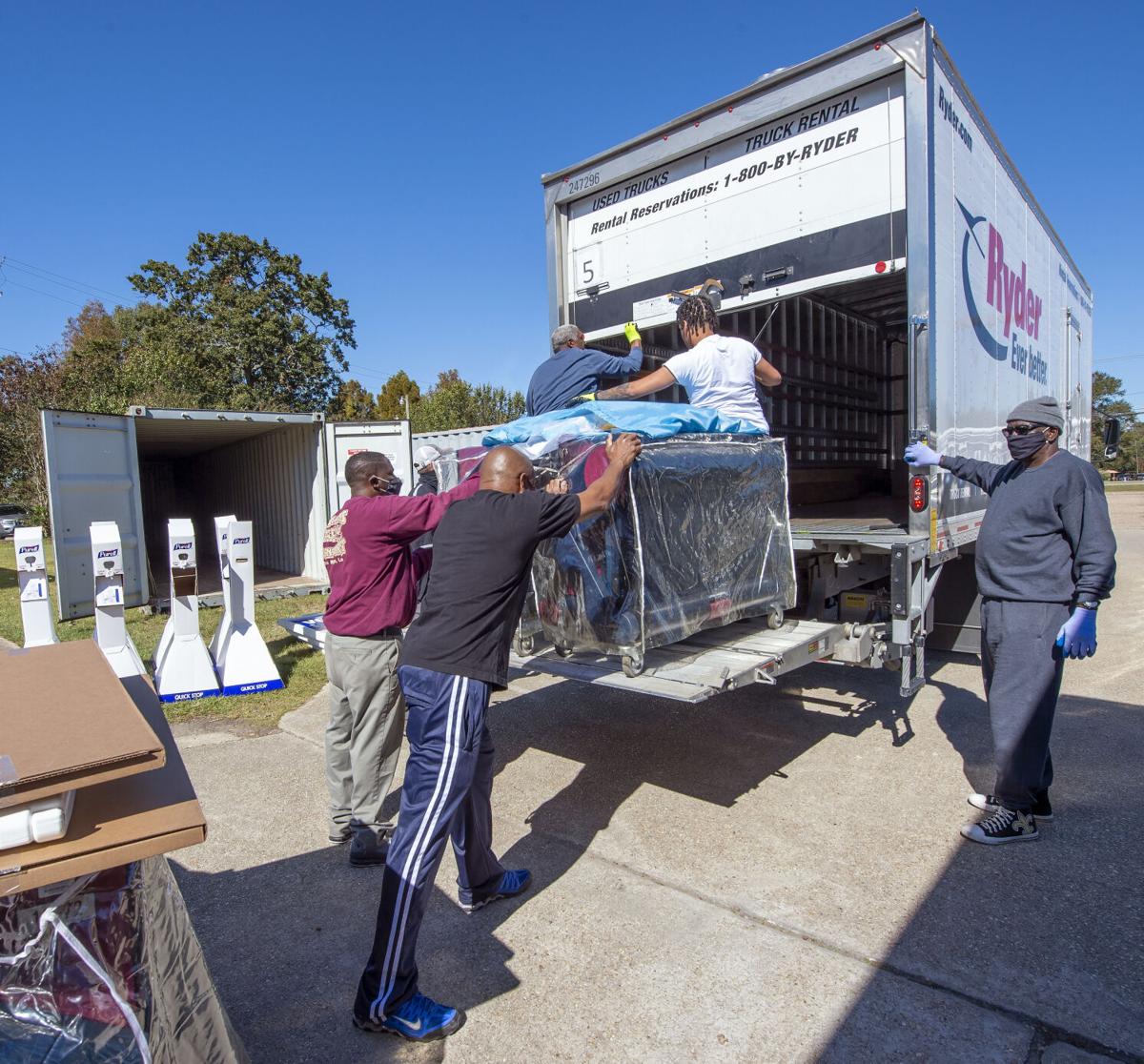 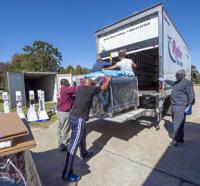 Offloading the devices from the truck, the voting machines are returned to the warehouse after the election Wednesday November 4, 2020, in Baton Rouge, La. 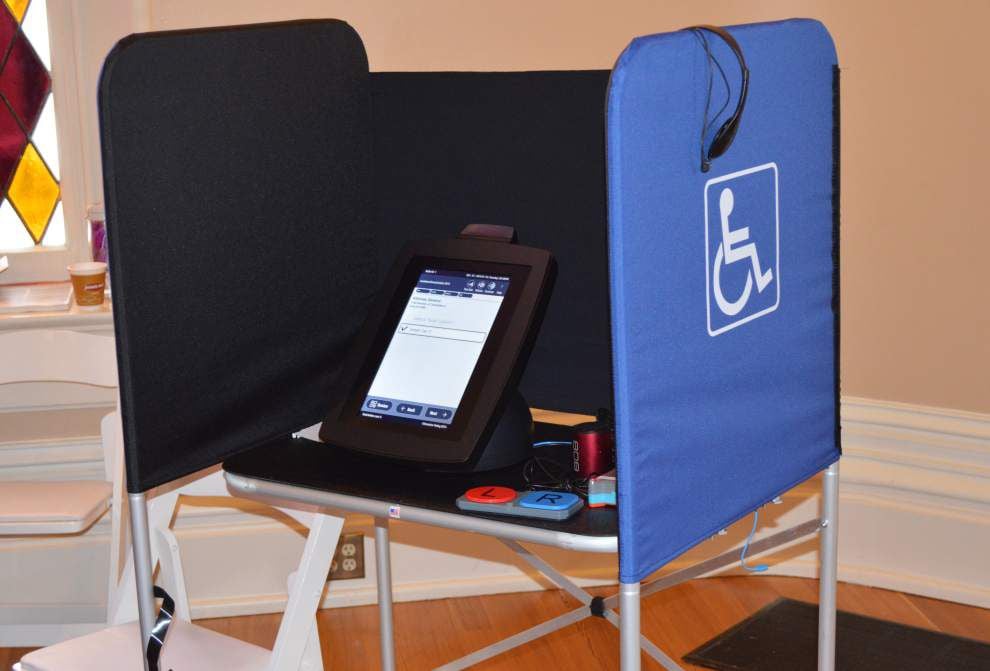 Offloading the devices from the truck, the voting machines are returned to the warehouse after the election Wednesday November 4, 2020, in Baton Rouge, La.

Dominion Voting Systems, based in Denver, had won the bid for Louisiana’s new machines, which were supposed to be used in the Nov. 3 presidential election. But the claims of bidding irregularities sidetracked those contracts. The bidding process is expected to begin again in January, said Secretary of State Kyle Ardoin.

In a Nov. 12 tweet, Trump claimed 2.7 million votes weren’t counted because of mechanical and software problems in the 28 states that use Dominion. That number apparently includes 221,000 votes in Pennsylvania that the president alleges were switched to President-Elect Joe Biden, as well as another 435,000 votes in other states using Dominion.

Trumps claims began as Facebook post but has been repeated as fact by conservative bloggers and the president’s supporters despite the allegations being thoroughly debunked. For instance, in his email to followers last week seeking to sow doubt in the results of the 2020 election, the Rev. Gene Mills, head of Louisiana Family Forum, pointed to the Dominion story.

Dominion Voting Systems issued a statement denying “claims about any vote switching or alleged software issues with our voting systems.”

“There is no evidence that any voting system deleted or lost votes, changed votes, or was in any way compromised,” says a statement emailed to the Associated Press and other reporters Thursday by the Cybersecurity & Infrastructure Security Agency, a federal agency that oversees U.S. election security. “The Nov. 3rd election was the most secure in American history.”

Louisiana won’t get new voting machines in time for next year's big elections, according to the Secretary of State’s Office.

Most of the 817,957 who voted early in person in Louisiana cast their ballots on leased ImageCast X machines, a touchscreen system from Dominion. Ardoin said the Dominion machines worked well.

“I’m not one to believe all commentary. I have read numerous articles about it. I’ve read Dominion’s statements,” Ardoin said. “If it were something broad scale, I think it would already be out there … None of that happened in Louisiana.”

Like in every election, Ardoin said, his office receives calls about irregularities. His investigators are looking into each claim, but nothing credible has come up that would change the outcome.

The biggest incident came from reports by about a dozen voters saying their initial vote for president – mostly for Biden in these cases – disappeared as they punched the names of other candidates on the voting machine screen.

Ardoin, who also saw the reports, said machine malfunctions occur, particularly with the state’s 20-year-old machines. But he didn’t see anything out of the ordinary. His technicians were dispatched and fixed the machines in question, he said.

“It’s a problem caused with the transportation of the voting machines to polling locations. They get jiggled and with the roads in Louisiana you can just sort of understand how things get bobbled. Sometimes its matter of making sure everything is connected the way they should be,” Ardoin said.

But those elderly machines would have been replaced by new machines provided by Dominion had all gone as planned.

Then a top aide to former Secretary of State Tom Schedler, Ardoin was charged in 2018 with nailing down the purchase of the 10,000 machines in time to train staff and commissioners how to use them across the state for the November 2020 election.

But the process to decide which vendor would sell the state those machines fell apart. The state’s chief procurement officer rejected Dominion’s $95 million winning bid and ordered the process to begin again.

Louisiana is voiding a multimillion-dollar contract award to replace thousands of voting machines after a key official in Gov. John Bel Edward…

The standards on which the bids were being based abruptly changed to benefit of Dominion, according to a complaint filed by Election Systems & Software LLC, one of the losing bidders.

Ardoin wrote the Office of State Procurement that it was all a big mistake.

Someone in the office had uploaded the wrong specifications – one for vote-counting machinery as opposed to criteria for voting machines, he wrote. The mistake was discovered, and the correct documents were posted. The committee began evaluating the bids and Ardoin signed off on the committee’s recommendation that Dominion get the contract.

Dominion’s bid was sidelined and the Office of State Procurement started the process again.

Ardoin said he wants to talk with registrar of voters and clerks of court, who run elections on a local level, after the Dec. 5 runoff to get their perspective how things went. He also is reach out to fellow secretaries of state around the country to get their experiences.

Because the Office of State Procurement is in the final stages of putting together the bid process, after adding whatever details his survey turns up, Ardoin anticipates the bids will be ready to go out sometime in January.

Republicans congratulate Cedric Richmond on his new gig -- with a disclaimer

Several Republicans in Louisiana’s congressional delegation are very happy with their colleague, U.S. Rep. Cedric Richmond, for landing a high…