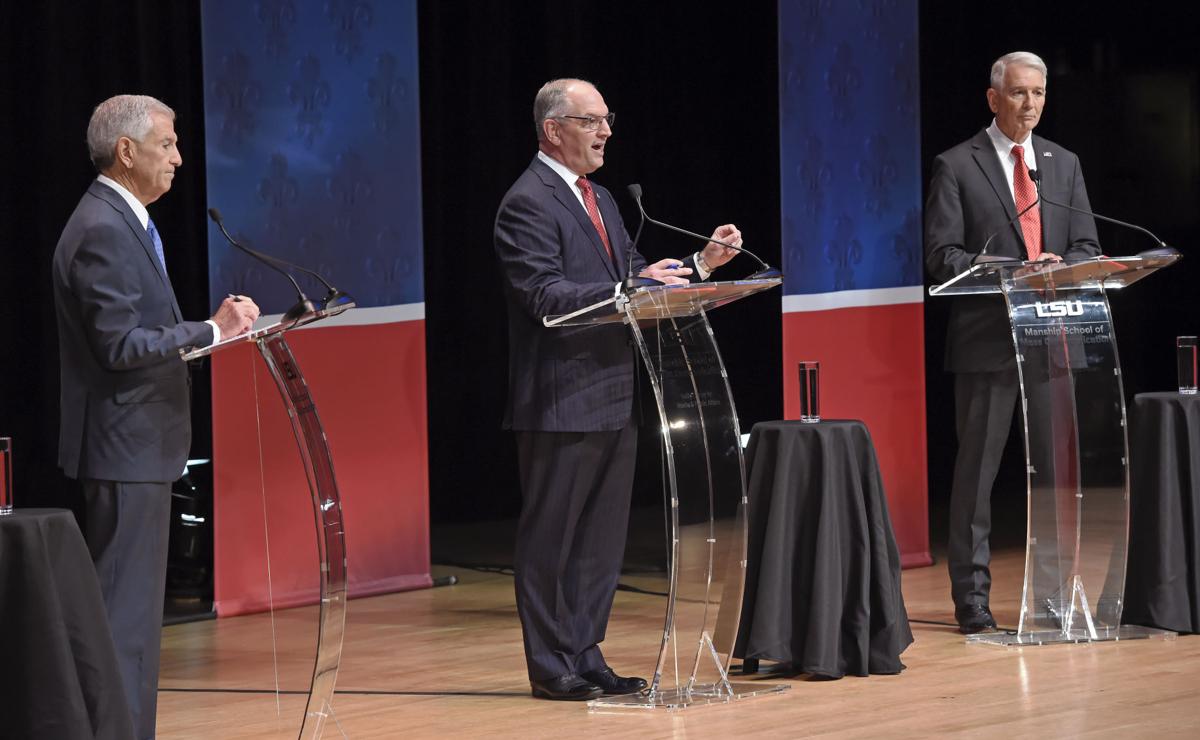 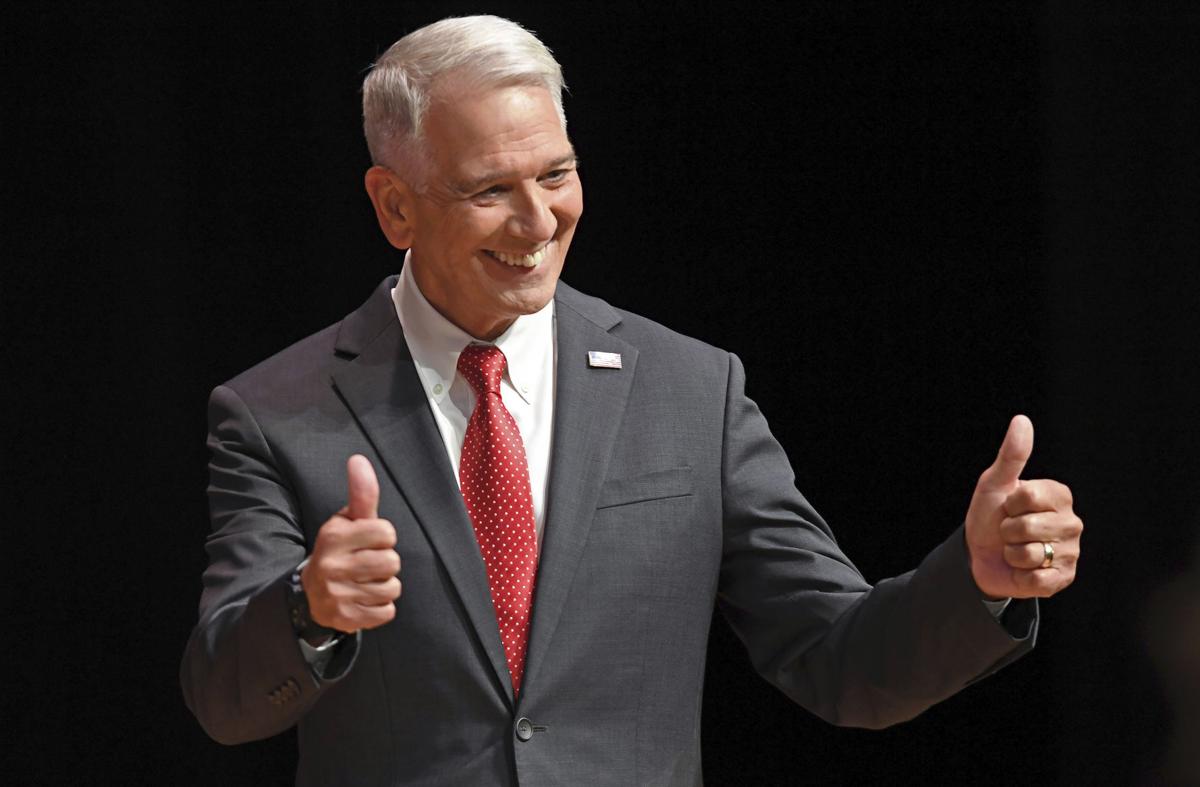 Republican Rep. Ralph Abraham acknowledges his supporters as he comes out on stage for a debate with Eddie Rispone and Gov. John Bel Edwards as they participate in the first televised gubernatorial debate Thursday Sept. 19, 2019, in Baton Rouge. 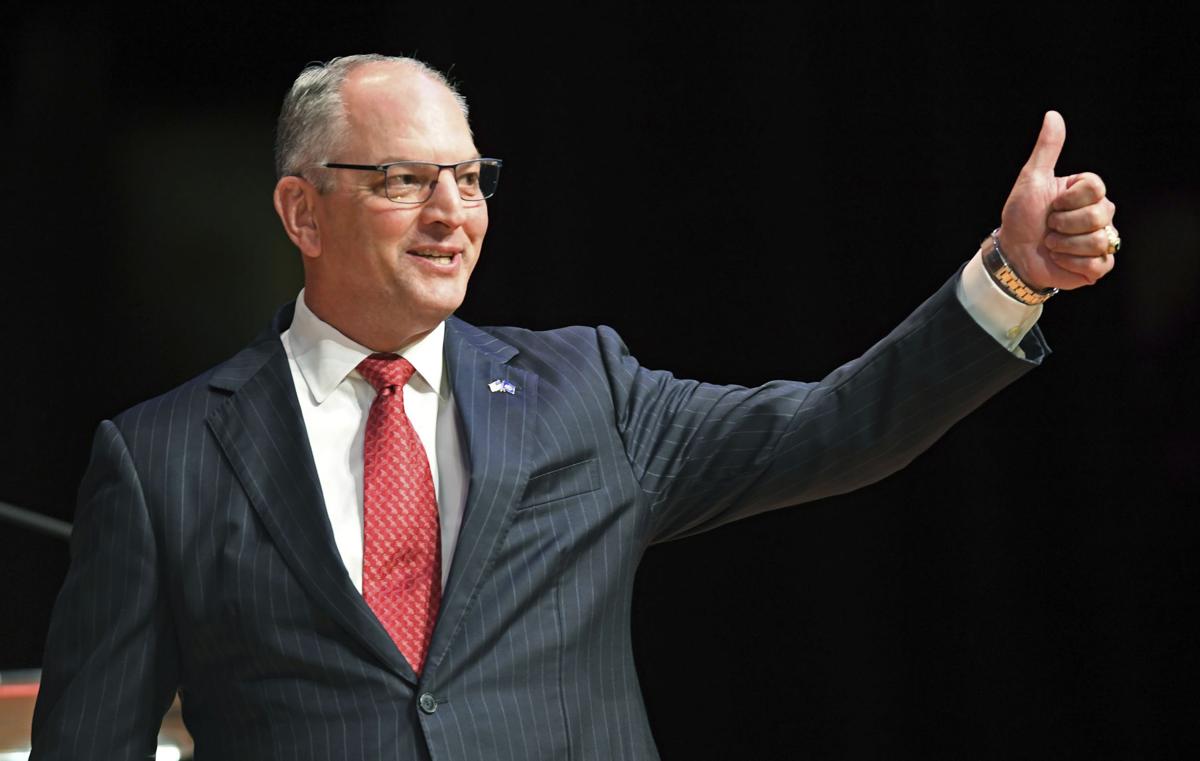 Gov. John Bel Edwards acknowledges his supporters as he comes out on stage for a Sept. 10 campaign debate. 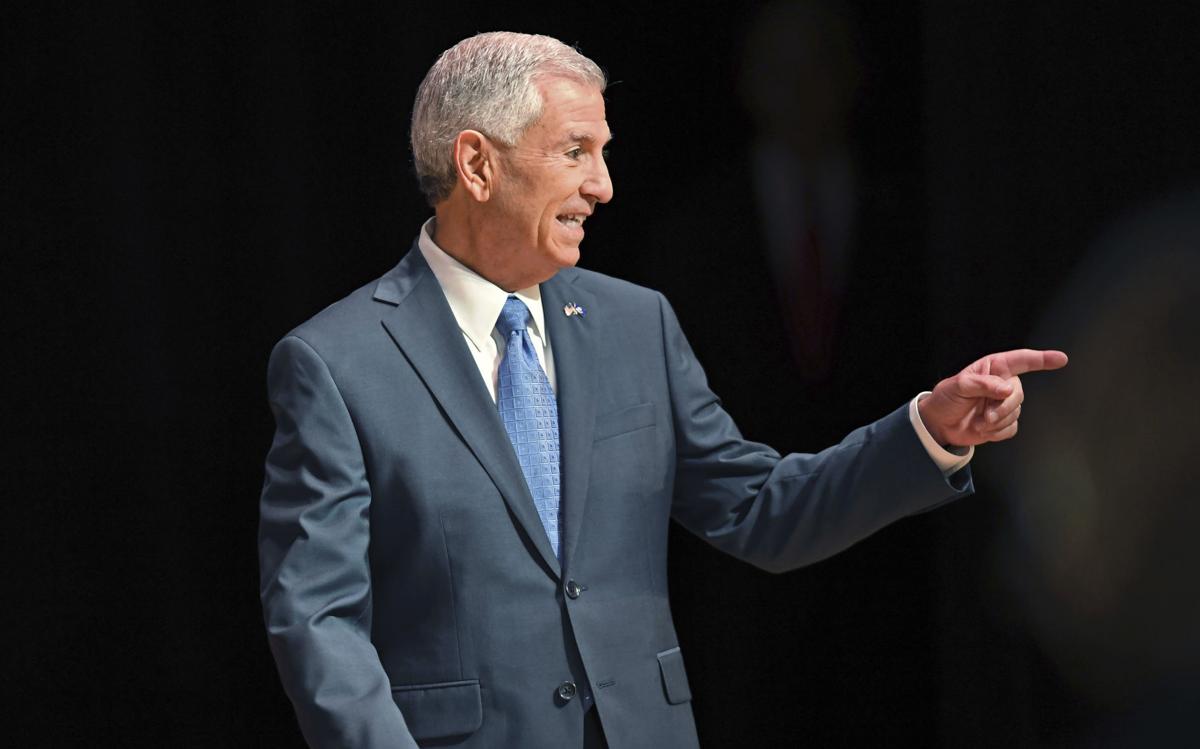 Eddie Rispone acknowledges his supporters as he comes out on stage for a debate with Gov. John Bel Edwards and Republican Rep. Ralph Abraham in the first televised gubernatorial debate Thursday Sept. 19, 2019, in Baton Rouge.

Republican Rep. Ralph Abraham acknowledges his supporters as he comes out on stage for a debate with Eddie Rispone and Gov. John Bel Edwards as they participate in the first televised gubernatorial debate Thursday Sept. 19, 2019, in Baton Rouge.

Gov. John Bel Edwards acknowledges his supporters as he comes out on stage for a Sept. 10 campaign debate.

Eddie Rispone acknowledges his supporters as he comes out on stage for a debate with Gov. John Bel Edwards and Republican Rep. Ralph Abraham in the first televised gubernatorial debate Thursday Sept. 19, 2019, in Baton Rouge.

In speeches, advertising and fundraising pitches, Edwards frames his GOP opponents as other versions of Jindal, the two-term governor whose financial policies are blamed for driving the state into a decade of budget troubles and left office with dismal approval ratings. Edwards, the Deep South's only Democratic governor, campaigns for the Oct. 12 election as the leader who brought Louisiana out of the fiscal ditch Jindal created.

"When I walked into office, I found a $2 billion budget deficit, the largest in the history of our state, left to me by Bobby Jindal. Working hard in a bipartisan fashion, we turned that into surpluses," Edwards said in a debate.

Abraham and Rispone note that when he was a state lawmaker, Edwards voted for most of the Jindal-era budgets that he now derides. The two don't defend Jindal's budgeting tactics, and they bristle that Edwards keeps bringing the ex-governor up.

Jindal has avoided Louisiana's political scene since he exited the governor's mansion in January 2016 and his presidential campaign sputtered shortly thereafter. Since then, he's appeared sporadically on national news programs to discuss federal issues. He hasn't commented about Louisiana's finances, even as his name was invoked repeatedly during four years of budget debates in Edwards' term, and he didn't return Associated Press requests for comment about the governor's race.

"My guess is they polled it and they found out that negative was high and people continue to blame Jindal for the problems," said Fletcher, who isn't working on the governor's race. "It's compelling. People believe it."

Across eight years in office, Jindal and the Legislature cut personal income taxes and allowed tax break programs to balloon. Public college financing was slashed more than nearly any other state in the nation, along with social services.

Jindal wouldn't agree to anything perceived as a tax hike, but he and lawmakers also didn't cut state operating expenses deeply enough to match annual revenue. Instead, the Jindal administration plundered savings accounts, sold off state property and delayed Medicaid bill payments to patch together budgets. That created new shortfalls annually, when those dollars disappeared or savings projections didn't materialize.

"The way he ran his budget was the most dishonest, gimmicky, smoke and mirrors," Edwards said. "We are doing so much better because we jettisoned all those irresponsible practices of the past."

Edwards and the majority-GOP Legislature ended the use of piecemeal financing to pay for ongoing programs. And after three years of special legislative sessions, they agreed to a seven-year tax package in 2018 to bring more money into state coffers and stabilize the budget, raising public school teacher pay and pouring new dollars into higher education.

Abraham and Rispone deride the tax hikes as chasing away residents and businesses. They say Louisiana shouldn't be amassing hefty surpluses.

"It's the taxpayer's money, that's what it is. It's over-taxation," said Rispone, owner of an industrial contracting company from Baton Rouge who is largely self-financing his multimillion-dollar campaign.

Both Republican candidates pledge to undo the sales tax increase that formed the centerpiece of the tax compromise, which boosted Louisiana's average state and local sales tax rate to one of the highest in the nation. But neither man specifically explains how he would cut spending in Louisiana's $30 billion operating budget to match the lost revenue.

"We will cut a lot of issues, but they will be where the waste, fraud and abuse is. It won't be services that the people need, I can assure you of that," said Abraham, a third-term congressman and doctor from rural northeast Louisiana.

Abraham and Rispone donated thousands to Jindal's campaigns. Rispone worked closely with Jindal on workforce development initiatives and an education overhaul that expanded charter schools and voucher programs. Abraham appeared in a campaign ad for Jindal in 2007.

Now, they try to keep their distance.

Abraham said the former governor represented core GOP principles "early in his career." But he said: "He kind of went astray there toward the end, probably went away from some of those basic tenets that we Republicans embrace."

Polls show Edwards well ahead of his competitors. Abraham and Rispone are vying to keep the incumbent from outright victory in the primary. All contenders run on the same ballot regardless of party. If Edwards doesn't top 50% of the vote, he'll face the second-place finisher in a Nov. 16 runoff.

As Republican candidate Eddie Rispone says at every opportunity: “Bobby Jindal isn’t on the ballot.”