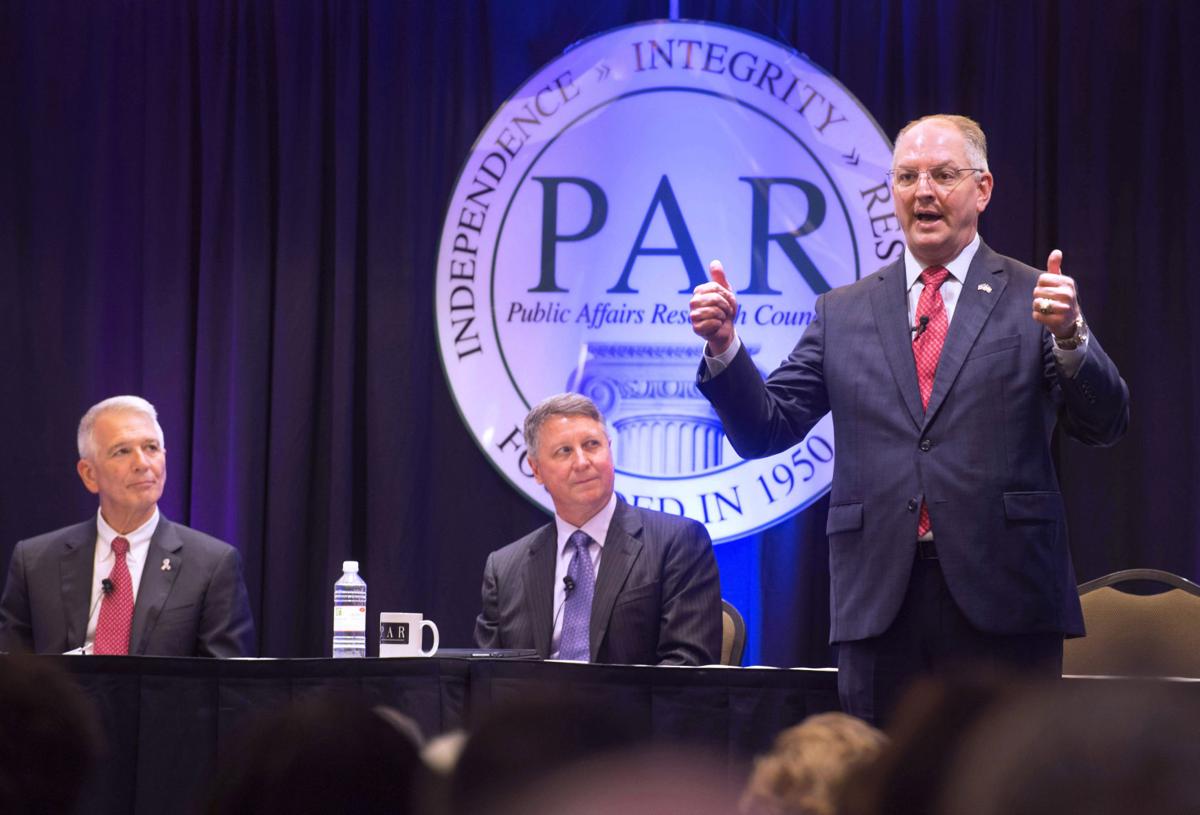 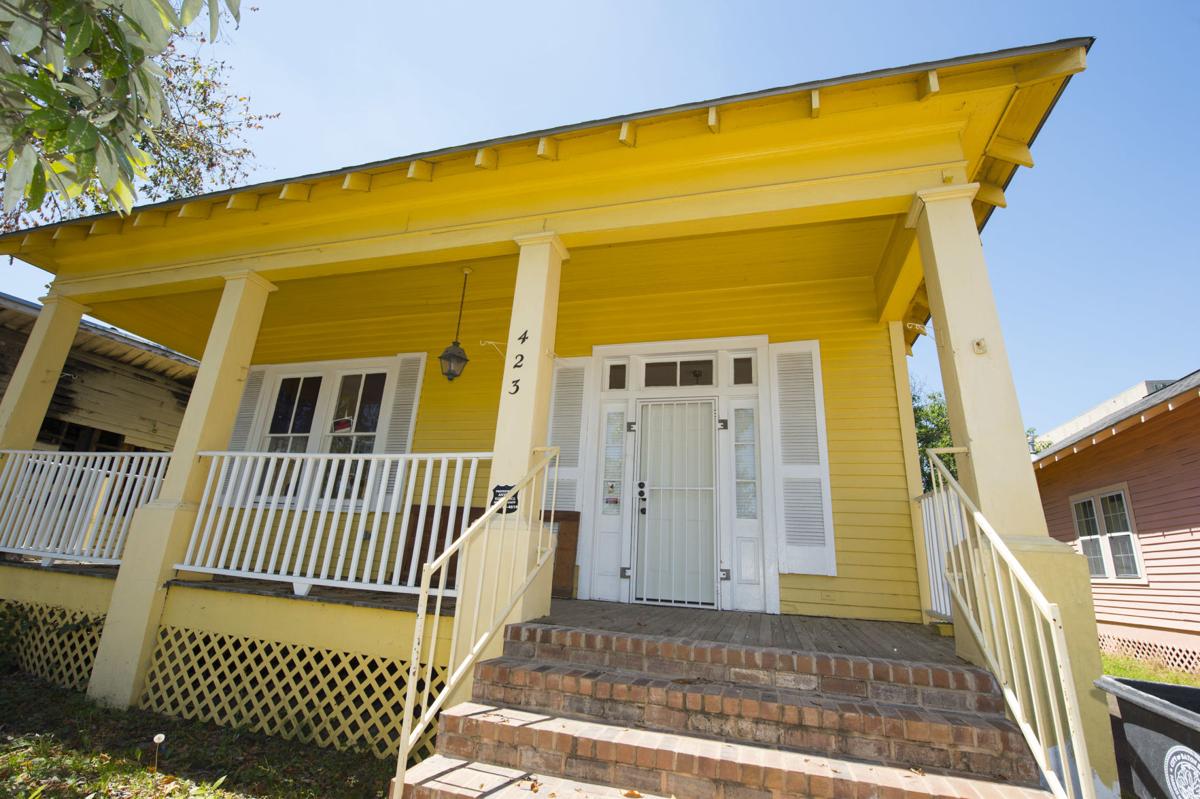 This house on N. 8th Street was the home to the campaign headquarters for John Bel Edwards leading up to his election to the Governorship In a runoff, on November 21, 2015.

This house on N. 8th Street was the home to the campaign headquarters for John Bel Edwards leading up to his election to the Governorship In a runoff, on November 21, 2015.

Robert Travis Scott was struck by the stark difference between the top two candidates at the Public Affairs Research Council gubernatorial forum in Baton Rouge exactly four years ago.

U.S. Sen. David Vitter, the Republican front-runner from Metairie, was polished and well-rehearsed in his answers, holding a thick policy pamphlet prepared by a highly professional campaign brimming with resources, noted Scott, who is PAR’s president.

Then-state Rep. John Bel Edwards, the Democratic candidate from Amite, seemed every bit the long shot. Scott saw that when Edwards answered questions, he glanced at notes he had scrawled on a piece of paper.

“One fellow had a high-octane, highly staffed approach,” remembered Scott. “The other guy was just trying to get his jalopy started every morning.”

The jalopy is long gone. Now the incumbent governor seeking re-election, Edwards is the one operating a high-octane campaign, flush with more than $10 million in campaign contributions and a healthy lead in the early polls. He has a stable of campaign staffers who take every opportunity to cast Edwards’ two Republican opponents – U.S. Rep. Ralph Abraham from northeast Louisiana and businessman Eddie Rispone from Baton Rouge – in a negative light.

If Edwards seems like a front-runner now, it hardly guarantees his victory this fall, as Louisiana history shows. Of the last six governors elected since 1987, only two of them held clear leads at this point in the campaign.

“There’s always the problem that front-runners have to fight to remain a front-runner,” said Roy Fletcher, a veteran political consultant.

He noted, however, that the last two incumbents who sought re-election – Mike Foster in 1999 and Bobby Jindal in 2011 – emerged victorious. Yet the three incumbents before them – David Treen in 1983, Edwin Edwards in 1987 and Buddy Roemer in 1991 – all lost their re-election campaigns.

Incumbency is a powerful weapon for a governor who has committed no major missteps and is not in office during an economic downturn or a natural disaster the size of Hurricane Katrina.

In the last month, Edwards has attended high-dollar fundraisers at the homes of corporate attorney Donna Fraiche in Baton Rouge and Ochsner Health Systems President and CEO Warner Thomas in New Orleans. He had another at Squire Creek, the country club near Ruston owned by oil and gas pipeline owner James Davison, a big donor to national Republicans.

“Now there’s no sneaking up on anybody,” Edwards said in a brief interview Wednesday. “We actually have more resources with which to fund a more robust campaign effort.”

At this point four years ago, few heavy hitters were hosting events for Edwards. Many potential donors wouldn’t even take his phone calls.

His campaign operated from a yellow house in downtown Baton Rouge that had spotty wi-fi, no hot water and a hardwood floor pocked with holes.

He had a nucleus of committed supporters: former Gov. Kathleen Blanco and her husband, Raymond; state Rep. Sam Jones, from Franklin; trial attorneys Glenn Armentor, from Lafayette, Phil Cossich, from Belle Chasse, and Dan Foley, from New Orleans; and lobbyists Dan Robin Sr. and Alton Ashy, among others. The state Democratic Party and the state AFL-CIO had endorsed him.

But Edwards’ seemingly slim chances of winning were expected to evaporate if then-New Orleans Mayor Mitch Landrieu jumped into the race. The mayor was better-known, better-financed and had been elected twice as lieutenant governor.

After hemming and hawing, Landrieu announced on April 27, 2015, that he would remain on the sidelines. But he notably failed to endorse Edwards, which prompted speculation that the mayor might privately support one of the two other Republican candidates, Lt. Gov. Jay Dardenne or Public Service Commissioner Scott Angelle, to keep Vitter from winning.

Bob Mann, a professor at LSU's Manship School, urged doubters of Edwards to do just that in a Times-Picayune column three weeks later.

“A Democrat — even one as effective, honest and politically moderate as Edwards — cannot win a Louisiana statewide election,” Mann wrote. “Twenty years ago, someone like Edwards would have been unbeatable. Today, however, a vote for the Amite Democrat is, for all practical purposes, a vote for Vitter.”

Over the next six months, however, Edwards steadily gained support by highlighting his background as a West Point cadet who had served as a captain in the Army, was pro-life, pro-gun and favored investing more in public education and health care. In the meantime, his three Republican opponents tore one another up.

Edwards led the primary with 40 percent and then cruised to victory over Vitter in the runoff with 56 percent of the vote. He was the only Democrat elected to statewide office that year.

The new governor wasted little time in beginning to build a war chest for his re-election effort.

Edwards’ campaign announced on Tuesday that he had raised $12.1 million for his re-election effort so far, and that he still has $10.2 million on hand.

Edwards’ campaign has moved up this year in terms of its digs – literally. It is now headquartered on the 10th floor of the Chase Tower in downtown Baton Rouge in an office that includes staffers working for the state Democratic Party, something Edwards didn’t have at this point in 2015. Developer Mike Wampold, who owns Chase Towers, is giving the Edwards campaign a break in rent.

The Democratic Governors Association has dispatched staffers to work for Edwards’ re-election effort this year. At this point four years ago, he couldn’t even get a meeting with the group’s executive director.

Meanwhile, at least four outside groups will be spending money to help assure Edwards’ re-election this year: Gumbo PAC, Rebuild Louisiana, American Bridge, all of which receive funding from a variety of sources, and Louisiana First, which is funded by Baton Rouge businessman Richard Lipsey.

Baton Rouge trial attorneys Don and John Carmouche are also likely to open their wallets to help Edwards, as they did with independent attack ads against Vitter in 2015. They did not respond to requests for comment.

In 2015, only two outside groups assisted Edwards’ campaign during the primary.

During the interview, Edwards said that he has a strong record of accomplishment. As his first act, he expanded Medicaid to cover the working poor, a move that has given health insurance to 480,000 people. Under his watch, the state went from a $2 billion budget deficit to a $300 million surplus last year.

Before diving into his annual State of the State address on Monday, Gov. John Bel Edwards condemned the recent spate of “disturbing” fires tha…

He adroitly managed the massive flooding in Baton Rouge in 2016 and helped keep the calm after the police shooting of Alton Sterling, a black man, and after a deranged man shot dead three Baton Rouge law enforcement officers in apparent retaliation.

Edwards and state legislators ended the budget cuts for public education enacted under his predecessor, Gov. Bobby Jindal, and are poised to raise salaries for teachers and school support personnel for the first time in 10 years.

“We have a tremendous case to make that we are better off, on so many fronts,” Edwards said.

But Louisiana voters have often elected governors who at this point in the campaign seemed to have little chance of winning: Roemer in 1987, Edwin Edwards in 1991, Foster in 1995 and John Bel Edwards in 2015. Jindal came from nowhere in 2003 to nearly defeat Blanco, a loss that set up his victory four years later.

“Louisianans love to coalesce behind the underdog,” said John Couvillon, a Baton Rouge-based pollster. “It’s idle speculation to assume that today’s front-runner will be the same front-runner as we get into mid- to late-September.”

Couvillon, basing his analysis on available polling, estimates that the governor has 45 percent of the vote at this point. That’s a strong showing, Couvillon said, but it’s not necessarily enough for an incumbent Democratic governor in a heavily Republican state.

Donald Trump won Louisiana in 2016 with 58 percent versus 38 percent for Hillary Clinton, the Democrat.

Republican congressional candidates won 57 percent of the vote in the 2018 November primaries versus 38 percent for the Democrats, according to Couvillon.

Abraham and Rispone have already made clear that they will depict Edwards as a tax-and-spend liberal because of the sales-tax increases that he sought and signed into law.

State lawmakers raised the state sales tax by 1 percent in 2016 as part of a plan to eliminate the budget deficits inherited from Jindal. They renewed .45 percent of the 1 percent in 2018, a move that Edwards calls a tax cut and that his Republican opponents label a tax increase.

“He just jacks up taxes over and over again,” Abraham said at PAR’s gubernatorial forum this year, held on Thursday.

Gov. John Bel Edwards faced one of his Republican gubernatorial challengers for the first time Thursday, squaring off with Congressman Ralph A…

Abraham did not mention that the Republican-led Legislature approved the tax measures. Rispone missed the event to campaign in central Louisiana.

“We are 49th or 50th in every category where we should be in the top tier,” he said. “I shake my head every day in despair over the numbers that we see on health care, education, you name it. We have people and businesses hemorrhaging out of this state. Instead of clawing to get in, they are clawing to get out. We can’t have that any more. We’ve grown government in this particular administration far, far bigger than any other administration I’ve ever seen, and it’s on the backs of taxpayers.”

Rispone said he has $10.4 million on hand, although almost all of that is money he has loaned his campaign. Abraham, who began fundraising only in December, said he has raised about $1 million.

At least two conservative outside groups – America Rising and Americans for Prosperity – will assist them in trying to take down Edwards.

Fletcher thinks the two Republican candidates will improve their odds by making the race as partisan as possible.

“About half the people in the state say in polls that they won’t for a Democrat under any circumstances,” Fletcher said. “I’d be asking the governor at every opportunity: ‘Why are you still a Democrat’”?

For now at least, Edwards is driving the high-octane car. He spoke confidently and fluidly on the issues during Thursday’s PAR forum, for which the questions were provided in advance.

Abraham mostly read his answers to the questions from a sheet of paper.

Our nation’s energy story is one of innovation, growth, and determination, and nowhere is it more evident than in my home state of Louisiana. …