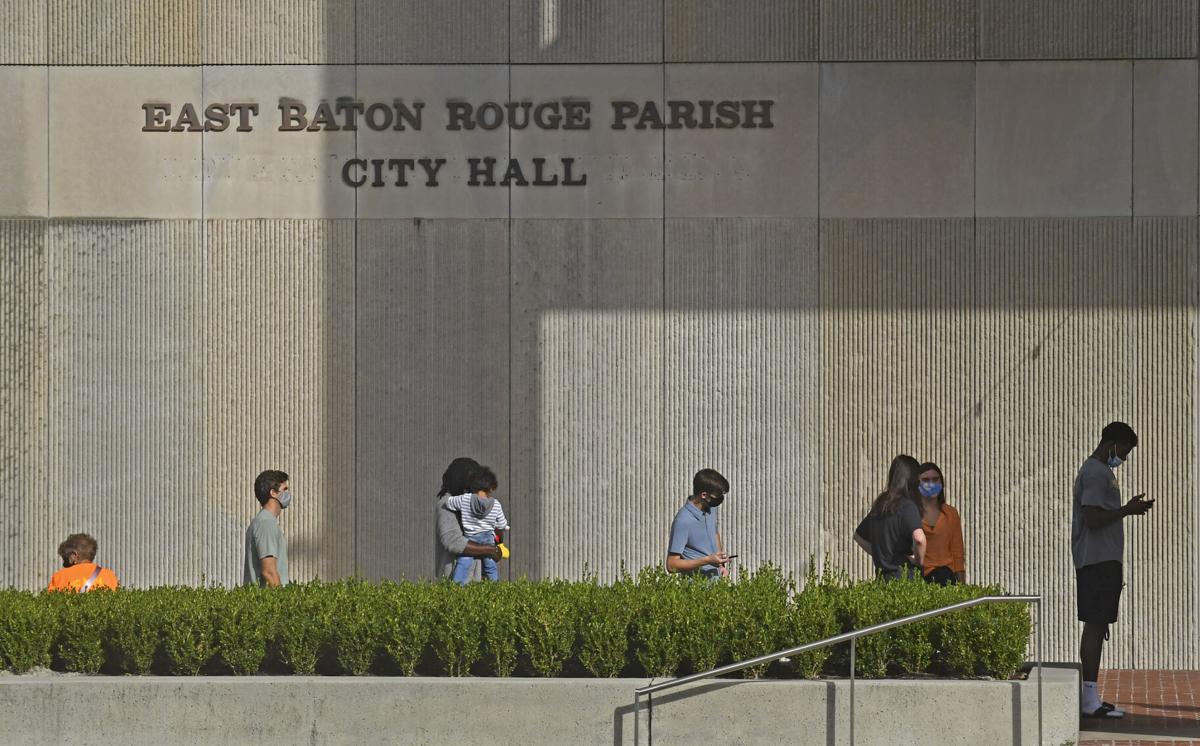 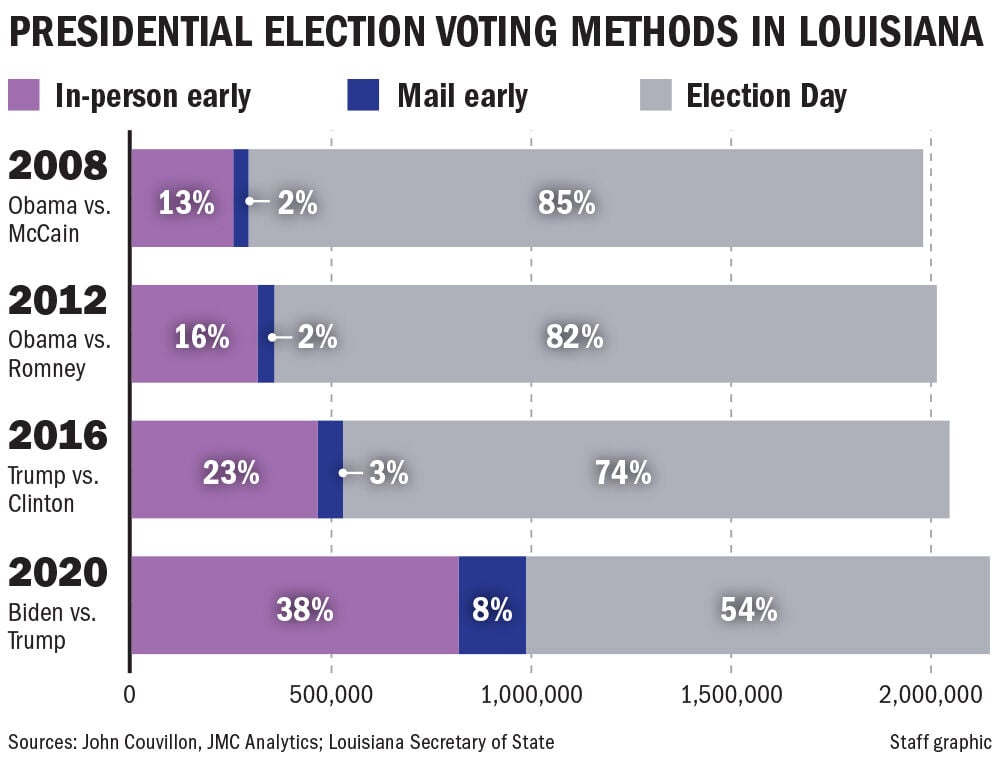 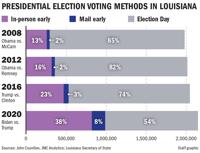 For the past decade or so, Louisiana voters have increasingly skipped the election-day fanfare and instead cast their ballots in the weeklong early voting period, or by mail.

In 2020, that trend collided with a pandemic and a court order to make it easier for people to vote early and by mail. As a result, the state shattered early and mail voting records and saw voter turnout spike.

Now some officials are considering whether the state should make it permanently easier to vote before election day, after the pandemic introduced hundreds of thousands of new voters to early and mail voting.

“I do think we need to have that discussion,” said Gov. John Bel Edwards, a Democrat. “So long as we can have elections that we have confidence in, we ought to extend every reasonable convenience to the voters. Because we want to promote people voting.”

Louisiana state law calls for a one-week early voting period, to start 14 days before the election. That’s a shorter period than voters across the U.S. experience on average, according to the National Conference of State Legislatures. While early voting periods range from four to 45 days, the average length is 19 days.

To change Louisiana’s law, the Republican-led Legislature and Democratic governor would have to agree.

And while many states, Louisiana included, extended mail voting to more people this year because of the pandemic, two-thirds of states allow any voter to receive a mail ballot. Five states – Colorado, Hawaii, Oregon, Utah and Washington – send mail ballots to all eligible voters.

Louisiana voters got a taste of expanded early and mail voting this year. But that was the result of a unique set of circumstances.

Republican Secretary of State Kyle Ardoin introduced emergency rules for the summer elections that expanded early voting from a week to 14 days and allowed a list of reasons people could get an absentee mail ballot because of the coronavirus pandemic.

But GOP lawmakers balked at the modest mail-in voting expansion when it came time to pass a plan for the November presidential election and December Louisiana runoffs. Ardoin introduced a scaled-back version that took away almost all the mail voting expansion and called for 10 days of early voting because of a quirk in the election calendar. Edwards refused to sign it, and a federal judge sided with the governor in court, ordering the state to implement mostly the same rules the state had in the summer elections, and with a 10-day early voting period.

Ironically, the biggest source of controversy in the emergency election protocols here, a modest expansion of mail-in voting, was used by only 3,490 voters, or 0.16% of the 2.1 million voters who cast a ballot in the presidential race.

But the expanded early voting period helped drive nearly 818,000 people to the polls before election day, shattering the previous record set in 2016 of 468,000. Mail voting saw a massive increase, from 63,000 in 2016 to north of 168,000. The vast majority were people age 65 and over, who are always allowed to vote by mail in Louisiana.

Ardoin said Monday it’s too early to say what permanent changes might be called for after this election. He said he’ll meet with local election officials in the coming weeks to gather input. And he said he will take into consideration local governments, including Caddo and West Baton Rouge parishes, who have called for more early voting sites.

“I’m not sure the pandemic itself increased early voting. I think people were excited and wanted to make sure they had the opportunity to vote early,” Ardoin said. “The pandemic certainly increased absentee voting and I think that will be a trend moving forward.”

To accommodate the surge in mail ballots, Sen. Sharon Hewitt, R-Slidell, passed legislation giving local election officials the ability to process – but not count – mail ballots up to four days before Election Day.

That helped allow election administrators to count the mail ballots on Election Day. By contrast, Pennsylvania, which didn’t allow such pre-election day processing activity, was still counting large numbers of ballots for days after the election, until it became clear Saturday that Joe Biden was elected president after securing the state’s 20 electoral college votes. A mirage that President Donald Trump was leading on election night steadily faded as mail ballots that tilted toward Biden were counted.

Louisiana also had a partisan split between early ballots and election day voting, according to Baton Rouge pollster John Couvillon. Trump’s lead was 53%-46% in Louisiana’s early and mail period, compared to 63%-35% on election day.

Hewitt credited the extra four days of processing with helping Louisiana count and report the vast majority of its ballots on election night. However, like other Republicans in the Legislature, Hewitt said Monday she remained wary of expanding mail ballots because she believes the risk it will get lost or delayed increases. Hewitt chairs the powerful Senate and Governmental Affairs Committee, which would need to sign off on changes to Louisiana’s voting system.

However, Hewitt said she is open to considering an expansion of early voting, noting that voters like it. But she and Ardoin both pointed to additional costs associated with expanding early voting. In the spring, Hewitt said she intends to make the four days of processing a permanent fixture in state law for mail ballots, and also vowed to look at the state’s voter registration rolls to remove people who are dead or moved away.

Voting rights groups have long pushed for easier pathways to voting in Louisiana, including automatic voter registration, expanded early voting and recently, universal mail voting, the latter of which the Republican majority in the Legislature has pushed back against.

Peter Robins-Brown, communications director for the Power Coalition for Equity and Justice, which sued to expand the state’s pandemic election rules to give more voters access to mail ballots, said Louisiana should “open up as many avenues as possible” to make it easier to vote.

He suggested the state expand early voting and allow it on Sundays, when early voting sites currently close, and implement automatic voter registration. Currently, voter registration closes in the weeks before each election, and residents have to actively register with the state to become eligible to vote. His organization pushed for universal vote-by-mail earlier this year.

“Every piece of evidence shows voter fraud is a myth,” Robins-Brown said. “There doesn’t seem like there’s any sort of a downside to expanding voting access in any way possible.”

Voter fraud is extremely rare, according to the Associated Press, including with mail-in ballots.

According to Couvillon, Louisiana has seen the number of early voters increase steadily in recent years. In the 2008 presidential election, about 254,000 voted early. That ticked up to 315,000 in 2012 for President Barack Obama’s re-election, and increased again to 468,000 when Donald Trump beat Hillary Clinton in 2016.

“Once people have a taste of the early voting I think it will be difficult to take it away,” Couvillon said. “Forty-six percent of Louisianans cast their vote before election day, which is unheard of.”

But whether the state continues to see huge numbers is contingent on whether the state continues to have more early voting days in the future, Couvillon predicted. With about 80,000 people voting early each day for this year’s presidential contest, that created about 240,000 new early voters. However, it’s difficult to say how many of those people would have voted early or on election day without the additional days.

Early voting in person has definitely been on the increase for years. Every year, every cycle it grows and grows. I expect that will continue,” said East Baton Rouge Registrar of Voters Steve Raborn. “Though some may have waited in line longer when early voting than on election day.”

Some changes made this year will be entirely temporary. For instance, mega-precincts on election day in hurricane-ravaged Calcasieu Parish will be winded down as normal polling places are restored. In New Orleans, places like the Smoothie King Center won’t be permanently used as early voting sites, Ardoin said, because normally the Smoothie King Center has basketball games and other events that would preclude it from being used.

Raborn spent a long election day holed up in City Hall, where workers were required to stay in his offices for about 12 hours because of rules preventing people from leaving the room where votes are processed and counted. They finished in about the same amount of time as in 2016, despite a huge increase in mail ballots. Trash bags full of empty envelopes littered the 8th floor of the building.

In the future, Raborn said he’d like to be allowed to do even more processing of the ballots to make the process even easier. Mail ballots are becoming more and more popular, and with the increased number of sign-ups for the 65 and older program, that is likely to accelerate. If so, Raborn suggested registrars should eventually gain the ability to scan the ballots before election day, if they don’t release results.

“If our program grows by much more we should really look into that,” he said.

Will Louisiana coronavirus rules be revoked? This high-stakes court battle could decide that.