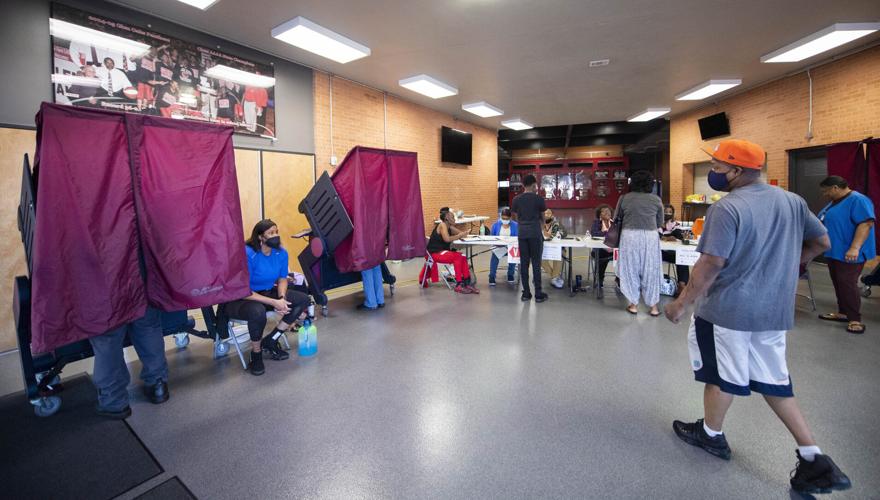 Eugene Butler, right, walks toward the sign-in table before voting at a midterm elections polling place in the foyer of the gymnasium at Glen Oaks High, Tuesday, Nov. 8, 2022. Kendra Hill, an election commissioner for precinct 2-16A, is seated at left between voting stations. 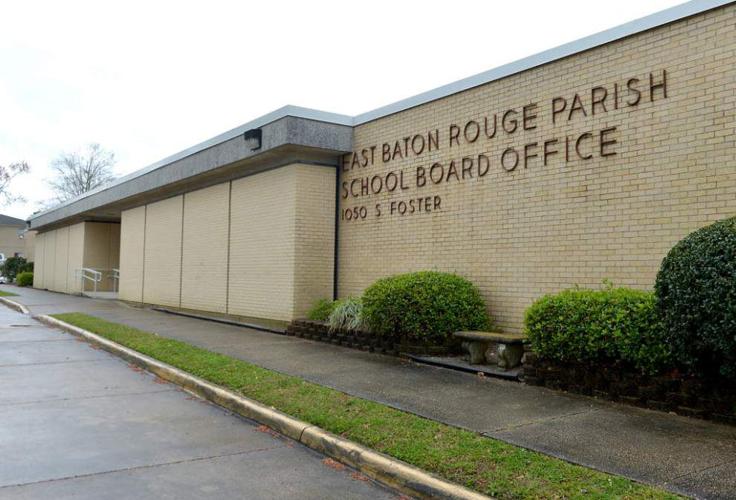 Eugene Butler, right, walks toward the sign-in table before voting at a midterm elections polling place in the foyer of the gymnasium at Glen Oaks High, Tuesday, Nov. 8, 2022. Kendra Hill, an election commissioner for precinct 2-16A, is seated at left between voting stations.

uesday was a bad night to be an incumbent on the East Baton Rouge Parish School Board.

Of the seven incumbents whose names were on the ballot, voters re-elected only two outright, Mark Bellue and Dadrius Lanus. And Bellue narrowly escaped defeat by just 21 votes.

Coming into the election, Bellue had a lot in his favor, including a 20:1 fundraising advantage over his lone challenger, Kimberly Bainguel, as well as the backing of all the major groups pumping money into this year’s elections.

Bainguel is a licensed social worker with her own practice and three children attending public school. She self-funded her modest campaign, knocking on doors with family and friends. She was could afford to send out just one mailer and only to a strategic slice of District 1’s 25,892 registered voters,

By contrast, Bellue and his supporters sent out mailers at will, many to every registered voter in that Broadmoor-centered district.

“I think we received at least two to three mailers every day from early voting to Election Day,” Bainguel said.

Despite all that, Bainguel almost won anyway. It’s a district that has become more African-American since Bellue took office in 2015 — Bainguel is Black and Bellue is White.

Bainguel has toyed with challenging the results, but said the $2,000 recount fee is too steep. Post-election, she said she’s received calls from people telling her they would have supported her if they had known how well she’d do.

“I think if I had had even more resources I would have done even better,” Bainguel said.

Lanus was the only incumbent to chalk up an easy win to reclaim his District 2 for a second term. Lanus, however, was not facing a newcomer as his fellow incumbents were. Instead, he ran against an incumbent of the past, Vereta Lee.

Lee represented this north Baton Rouge district from 2007 until 2018 when Lanus ended her tenure on the board.

The outside interest groups with the best scorecards coming out of Tuesday’s elections were the Baton Rouge Area Chamber and the Baton Rouge Alliance for Students. They picked the winning candidates in all five races that were decided Tuesday.

Both groups endorsed candidates in all nine School Board districts via associated political action committees. The Alliance went a step further and energized yet another affiliated entity, Red Stick Leaders For Students, which has reported $445,000 in independent spending so far this election cycle.

“We feel very good with where we are. It’s very much in line with where we anticipated things to be.” said Adonica Duggan, who helped found the Alliance last year.

The Alliance not only supported the candidates it endorsed, but it attacked some, but not all, of their opponents — including four incumbent School Board members and Lee.

Duggan said the Alliance felt such spending was necessary to allow voters to “draw contrast with the incumbents.”

“I completely understand how the incumbents feel because it gets very loud and noisy,” Duggan said, “but I think it’s important to people who aren’t paying attention to look at the leaders we have and make decisions about them.”

Faring less well on Tuesday was Stand For Children Louisiana, which picked winning candidates in three of the seven races where it endorsed someone. The group, which has active parent chapters in Baton Rouge and New Orleans, has reported the most spending overall, almost $571,000, via its independent expenditure committee.

Stand’s advertising tried to highlight policy initiatives it supports that have been initiated by Supt. Sito Narcisse, using the tag line “EBR On The Rise.”

“When you have folks who are running about how awful things are and everything is wrong, it is a potent competing message,” said Carrie Griffin Monica, Stand Louisiana’s executive director. “I think we can all agree that our system is not doing well for all kids. That can be true and it can also be true that there are tons of things that the board is doing well.”

Stand supported Bellue and Lanus in their winning races. It also supported Cliff Lewis, a parent liaison at a charter school in Baton Rouge, who successfully unseated incumbent Evelyn Ware-Jackson, who leaves the board after 12 years in office. Lewis fell short in 2018 when he challenged Ware-Jackson. Unlike this election, that year Ware-Jackson was backed by Stand.

Stand For Children, however, couldn’t successfully protect incumbents Jill Dyason and David Tatman, both of whom lost their respective election bids. The group has reported spending about $127,000 to help Dyason and $123,000 to support Tatman. Both candidates, however, had well-financed opponents running their first campaigns for public office.

Dyason, who has represented District 6 since 2001, lost to Nathan Rust, who owns a painting company, earning only 43% of the vote to Rust’s 57%. Both are Republicans.

Rust and Martin were endorsed by both the Baton Rouge Area Chamber and the Alliance, which has reported spending about $38,500 and $37,000, respectively, on their behalf.

Stand, however, saw one of its endorsed incumbents, District 7 representative Mike Gaudet, a Republican, make it to the runoff. He held off a challenge from well funded and Alliance-endorsed newcomer Gloria Wall, also a Republican, who trailed in the three-person race with 24% of the vote. Gaudet is in the runoff with another challenger, Cathy Carmichael, a Democrat who led the voting with 40% versus Gaudet’s 35%.

Griffin said that strong anti-incumbent sentiment this year was likely amplified by anger arising from the pandemic and the disruption it created for parents and schools.

“I think the last few years have been so much more of a challenge for so many reasons, and especially for the people who suffered the most,” she said.

A coalition of six candidates who pledge not to be influenced by outside money did not fare so well. Four of them lost their races. Only two, Carmichael in District 7 and Johnson in District 7, made it into their respective runoffs.

First-time candidates with strong financial backing and underfunded opponents generally fared well Tuesday, especially when it was an open seat.

In District 3, which is centered around Scotlandville, veteran social studies teacher Carla Powell won her three-person race, amassing 59% of the vote. Powell replaces Tramelle Howard, who announced in February that he would not seek re-election.

In District 4, Shashonnie Steward led her three-person race with 47% of the vote, 271 votes shy of winning outright. Steward, the head of a company that tracks and provides service to incarcerated youth, is now in a Dec. 10 runoff with Monique Wicks Robinson, operator of an after-school program. The winner of the runoff will replace Dawn Collins, who opted not to run again in July on the eve of qualifying.

The biggest surprise of the night and the candidate who most stunningly avoided the curse of incumbency was Connie Bernard. Bernard led a three-person District 8 field with 35% of votes despite announcing Sept. 2 that she was ending her reelection campaign.

Bernard, a Republican, landed in the runoff against Katie Kennison, a Democrat and the mother of two children in public school, who was just 98 votes behind Bernard. Trailing in third place was Independent Joseph Britt with just 30% of the vote.

Bernard quickly announced that was changing her mind and running after all. She is in a strong position to win given the politically conservative bent of the south Baton Rouge District 8. If she wins, she would serve a fourth term in office.

She can’t run again in 2026 because of term limits approved by the Legislature in 2014 that are finally taking effect.

Bernard has courted controversy throughout her 12-year tenure on the board. She pleaded guilty to a misdemeanor after an August 2018 altercation with a teenager. In 2020, she was the target of a failed recall attempt after she shopped online during a controversial meeting at which the board voted to rename Lee High to Liberty High to remove any continued attachment to the Confederate Gen. Robert E. Lee.

Stand has been a big opponent of Bernard’s in the past. In 2014, the group gave Bernard’s opponent that year, Chris Bailey, $6,000 in his unsuccessful bid to unseat Bernard. It called for Bernard’s resignation in 2018 and again in 2020.

Stand did not endorse anyone in the District 8 election this year and Griffin said the organization has no plans to intervene now. Duggan, with the Alliance said her organization is still thinking though what it will do.

East Baton Rouge Parish voters ousted three members of their school board Tuesday night and two more were sent to a runoff.