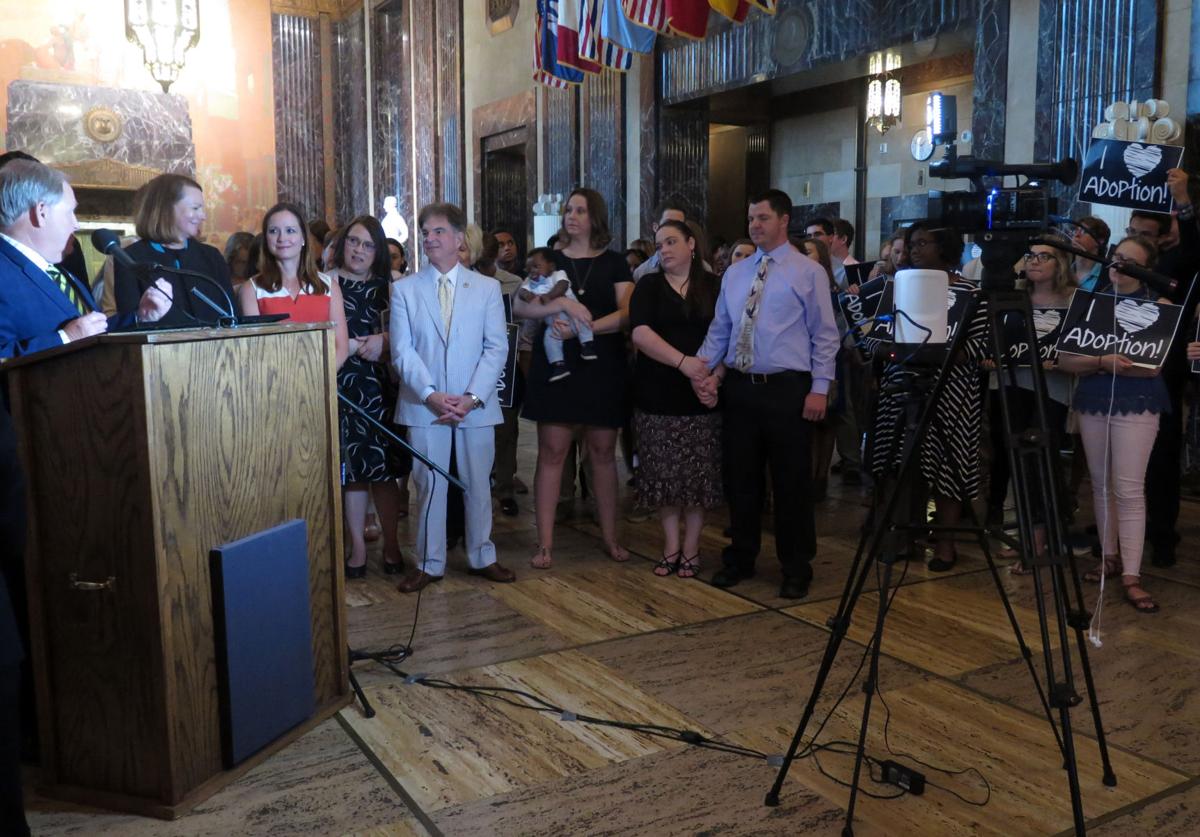 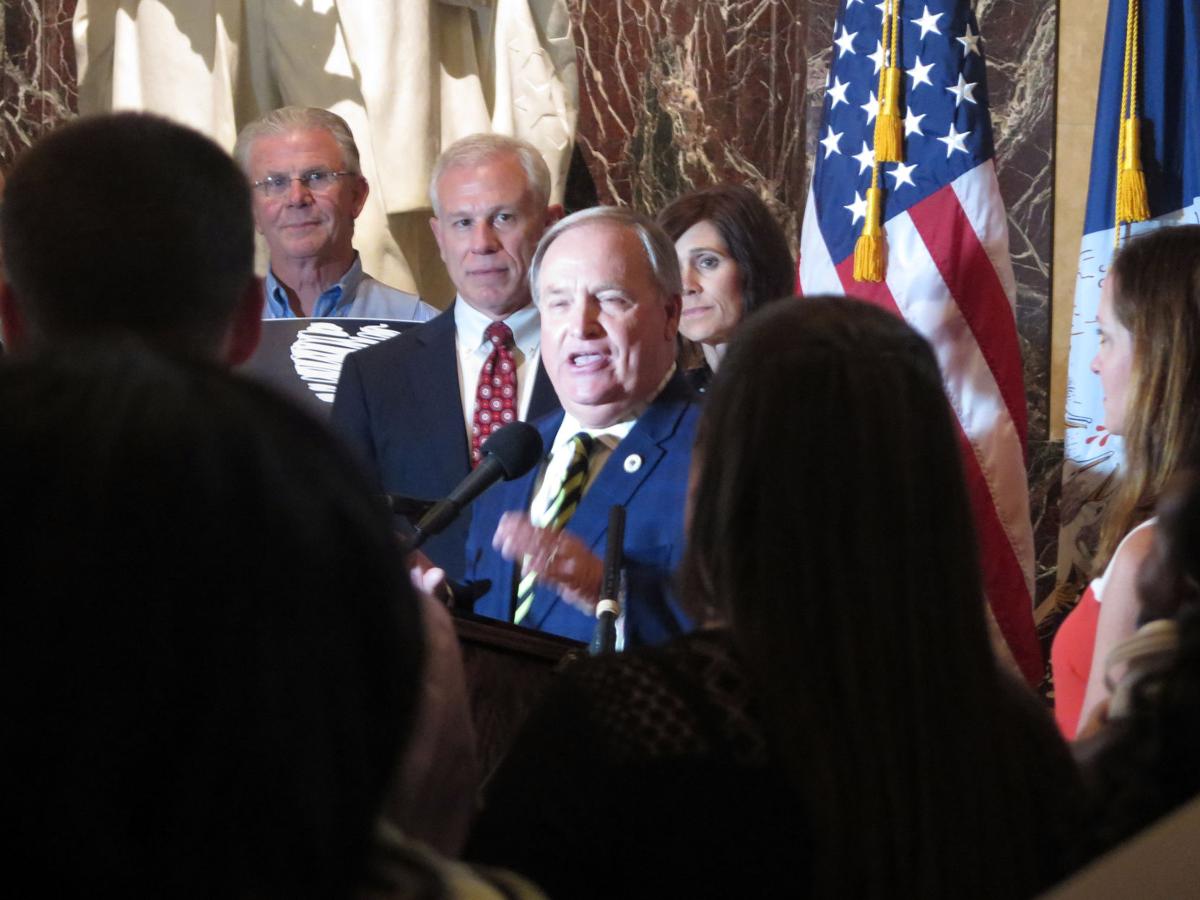 Baton Rouge Republican Rep. Rick Edmonds speaks about his two adoption bills that will become law on Aug. 1, 2018 during a rally at the State Capitol on Monday, June 4, 2018.

Baton Rouge Republican Rep. Rick Edmonds speaks about his two adoption bills that will become law on Aug. 1, 2018 during a rally at the State Capitol on Monday, June 4, 2018.

When Dylan David and his wife Kristine waded into the largely unregulated world of adoption, they lost their money, lost the child to a higher bidder, and had no legal recourse.

The Baton Rouge couple had agreed to pay $2,500 in expenses to an expectant mother who would allow them to adopt her child. The mother kept asking for more money, then they discovered she also had collected $12,000 from another couple, David said. Law enforcement told the couple that the mother broke no laws, mainly because the existing laws covering this situation were so vague.

“We had a failed adoption,” David said Monday after flying in from the offshore oil platform where he works to attend a State Capitol rally celebrating a new law that he and his wife helped pass.

“This certainly takes the dread out what happened to us happening again,” David said. They plan to try adoption again once Act 562 goes into effect on Aug. 1.

The new law limits adoption costs to $7,500, details the type of paperwork necessary, and makes lying about the pre-natal expenses a crime punishable by up to $50,000  fine and 10 years in prison.

Anti-abortion advocates pushed the new law as part of a package to make adoption an easier alternative to medically terminating pregnancy.

“I call it the ‘Protection of Adoption’ Act. It provides a framework so that adoption is not so confusing,” Edmonds said.

The new law changes the word “reasonable” to “actual” when listing the types of expenses an expectant mother can expect the prospective parents to pay. In addition to medical costs and legal fees leading to what is called an “authentic act of voluntary surrender” that were in the existing statute, the new law includes expenses such as temporary housing, maternity clothes and personal hygiene products. The law specifically excludes living expenses such as vehicles and leisure activities.

“Now you have list of specific expenses, specific costs. The Children’s Code absorbs it all and the lawyers and the agencies and the others who work on adoptions – and the prospective parents – know precisely what is required and how much it should cost,” Edmonds said.

No legislator voted against the bill and Gov. John Bel Edwards signed it into law last week.

The gathering in Memorial Hall also celebrated a second adoption bill in the package advocated by anti-abortion groups including Louisiana Family Forum, the Louisiana Conference of Catholic Bishops, and Louisiana Right to Life.

The “Adoption Option Act” aims at publishing a website that would provide expectant mothers and parents who want to adopt with an exhaustive list of the government agencies and private organizations that can facilitate adoptions.

Current law requires the Louisiana Department of Health to publish abortion alternatives. While the website has information on adoptions, it’s presented from the point of view of parents seeking a child to adopt, with very little guidance for a pregnant woman seeking to put her child up for adoption, supporters of the new law said.

Act 319, which goes into effect Aug. 1, requires the Department of Children and Family Services to maintain a website, linked to the LDH website, that features more information on adoptions along with easily comprehensible first steps to aid pregnant women seeking that alternative to abortion.

A task force would be formed to develop education initiatives and publicize information on adoptions.

Louisiana Right to Life pushed the legislation after a Hollywood-showcased documentary that premiered at the Governor’s Mansion last month.

'Life-changing experience': Story of a Metairie man's reunion with birth mom who nearly aborted him

What began as a Jesuit High School oratory competition five years ago has evolved into a documentary, showcased by Hollywood, that will be pre…

“I Lived on Parker Avenue” followed David Scotton, an LSU law student, from his Metairie home to Indiana to meet the woman who gave birth to him and put him up for adoption in 1993. She was in an Indianapolis abortion clinic with the doctor ready to perform the procedure when she changed her mind. At home wondering what to do, friends and family of the birth mother and told her about a law firm that handles adoptions.

“I had already authored a bill and then this documentary came up and it married perfectly with my effort,” Edmonds said.

No legislators voted against House Bill 449 and Edwards signed it into law on May 15.