Louisiana has spent more than $5.1 million on at least 84 lawsuits involving sexual harassment claims since 2009, a new audit has found.

The Louisiana Legislative Auditor released Tuesday evening the findings of a months-long probe into how the state handles claims of sexual harassment and how pervasive the problem has been in recent years.

The latest tally, which includes payouts as well as the total cost of litigating, is much larger than reflected in settlement records obtained by The Advocate through a public records request last fall, which showed about $3.9 million dating back to 2004.

By far, the largest payouts reflected in the new audit came in the state Department of Corrections, which reported spending more than $1.1 million spent on harassment lawsuits in the past decade.

The auditor's investigation was prompted by a legislator's request following the abrupt resignation of a governor's top aide who had been accused of sexual harassment.

Legislation that aims to strengthen state policies against sexual harassment in government appears heading for swift passage in the State Capitol.

The state agreed last month to pay $85,000 to settle claims against former deputy chief of staff Johnny Anderson, who resigned in November amid allegations that he had harassed a woman he supervised. He has denied any wrongdoing in a statement attached to the agreement.

More recently, Secretary of State Tom Schedler has also faced a lawsuit stemming from allegations that he sexually harassed an employee for more than a decade – allegations that he denies. Schedler, a Republican, has said he won't step down before his term expires in 2020 but also will not seek reelection.

The auditor's findings on state policies closely mirror the conclusions reached by several other reviews that largely prompted by the allegations against Anderson and a national movement that has raised awareness of sexual harassment and misconduct.

Chief among them: Louisiana doesn't have a uniform sexual harassment policy for agencies, and state law doesn't mandate training on reporting, identifying or investigating harassment.

State lawmakers are considering multiple bills this session meant to streamline the state's harassment policies. Several are slated to return in a Senate and Governmental Affairs Committee hearing scheduled Tuesday, after the panel previously passed conflicting legislation to the chamber floor.

Aside from cases that led to lawsuits, the auditor found 331 internally-reported harassment cases in the past five years – more than half of which fell within the state's higher education and corrections systems.

The auditor's findings came from statistics compiled by the state Office of Risk Management and Civil Service.

As part of the larger review, the auditor also asked about 30,000 state workers to take part in a voluntary, confidential survey to assess their knowledge of sexual harassment, as well as personal workplace experiences. About 3,200 percent of them responded back, with nearly 16.2 percent of respondents saying they felt that they had been subjected to inappropriate or offensive comments about their or someone else's appearance or sexual activities.

The auditor also concluded that harassment may be a much more pervasive problem in state government as 77 percent of employees said they never reported the harassment they felt they experienced.

Bills that have been proposed this session would require more anti-harassment training in state government and more clearly define how the state handles allegations.

Like other reviews, the auditor's report notes that only four of the 18 agency policies evaluated met the U.S. Equal Employment Opportunity Commission's minimum criteria. Most did not clearly define sexual harassment in their policies. At least two agencies gave department heads the ability to create exemptions to sexual harassment policies.

"Due to these inconsistencies, it may be beneficial to Louisiana to promulgate certain minimum requirements for all state government sexual harassment policies," the auditor concluded. 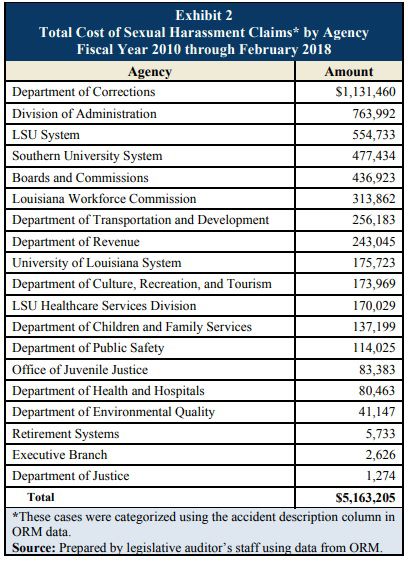 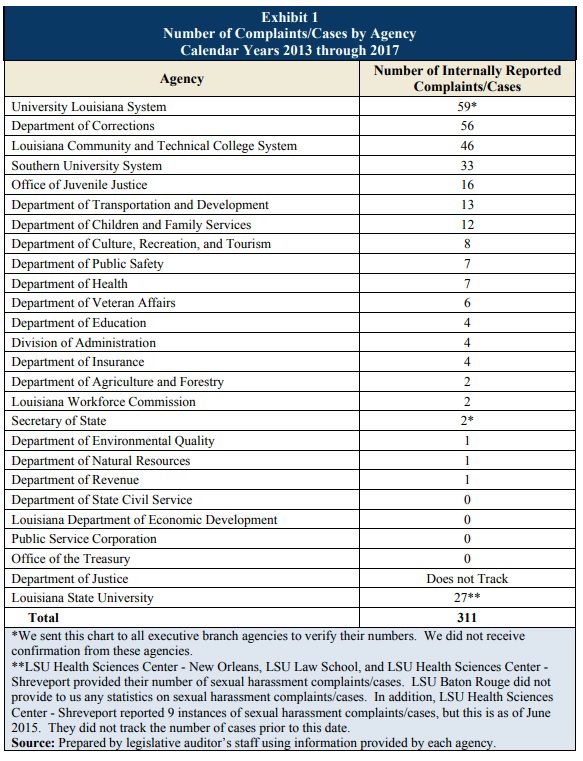 Anti-sexual harassment legislation back on track after audit reveals $5.1M+ paid in decade

A bill that seeks to establish stricter policies against sexual harassment in state government is moving forward at the Capitol, as new data s…