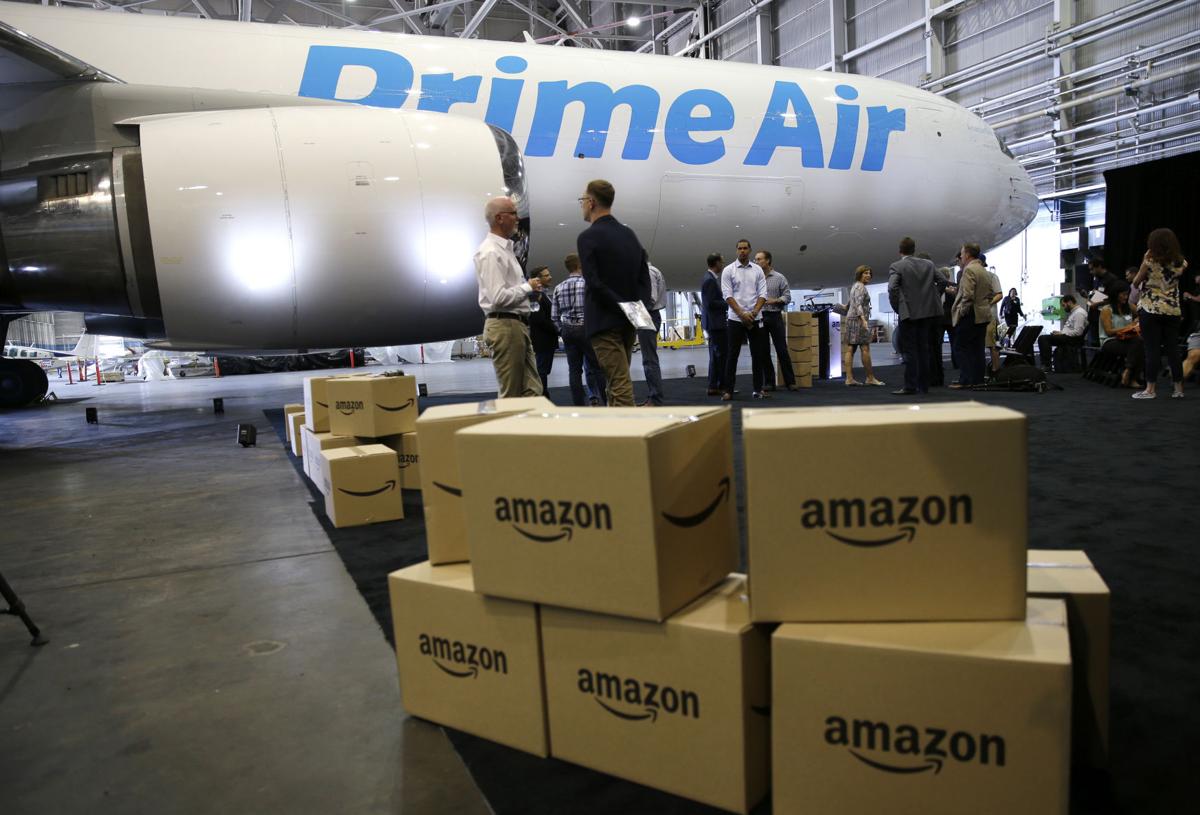 FILE - In this Thursday, Aug. 4, 2016, file photo, Amazon.com boxes are shown stacked near a Boeing 767 Amazon "Prime Air" cargo plane on display in a Boeing hangar in Seattle. Amazon’s announcement on Monday, Jan. 30, 2017, of a new air cargo hub in Kentucky is the latest way the e-commerce retailer is dipping its toe, or perhaps whole foot, into building out its shipping and logistics unit. If successful, the move ultimately means lower costs for Amazon but it could eventually pit Amazon against package deliverers like FedEx and UPS. (AP Photo/Ted S. Warren, File) 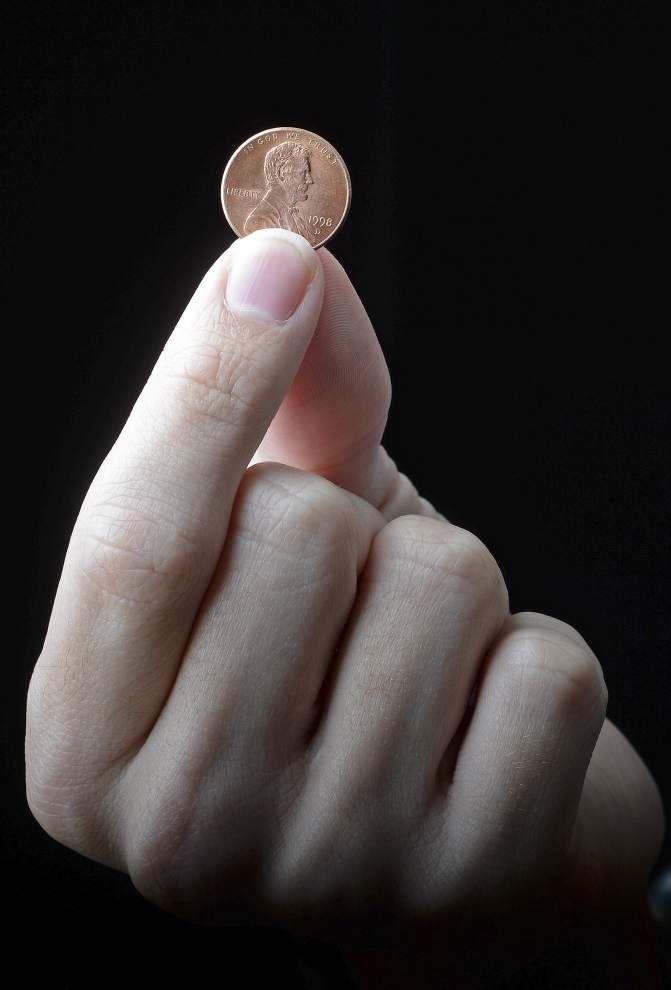 FILE - In this Thursday, Aug. 4, 2016, file photo, Amazon.com boxes are shown stacked near a Boeing 767 Amazon "Prime Air" cargo plane on display in a Boeing hangar in Seattle. Amazon’s announcement on Monday, Jan. 30, 2017, of a new air cargo hub in Kentucky is the latest way the e-commerce retailer is dipping its toe, or perhaps whole foot, into building out its shipping and logistics unit. If successful, the move ultimately means lower costs for Amazon but it could eventually pit Amazon against package deliverers like FedEx and UPS. (AP Photo/Ted S. Warren, File)

Louisiana is setting itself up for a massive lawsuit if the state, as planned, starts charging sales taxes on internet purchases Jan. 1 and doesn’t dramatically alter the way those taxes are collected and remitted, according to a respected Washington think tank.

June’s U.S. Supreme Court decision in Wayfair v. South Dakota gave states the ability to collect sales taxes from website sellers in different states. The 5-4 opinion also opened the possibility of legal action for those states with a collection and remittance system that is too burdensome for out-of-state vendors.

Louisiana is one of the states that can begin collecting taxes on retail sales over the internet after a Thursday ruling by the U.S. Supreme Court.

That defines the chaotic sales tax system in Louisiana, according to a recent report by The Tax Foundation, formed in 1937 by executives with large corporations to analyze tax policies. In addition to 370 local jurisdictions that operate pretty much on their own, Louisiana has more than 200 exemptions, though half of them have been suspended for seven years, that create complexities for retailers. Retailers, for instance, can forgive sales taxes on Mardi Gras beads bought by individuals for krewes but not by individuals buying for their families.

The way out, according to The Tax Foundation, is for Louisiana to form a centralized system, like most states have, that would collect the state’s 4.45 percent sales tax along with any taxes levied by local jurisdictions.

Post-Wayfair Options for States by the Tax Foundation

Creating “a uniform system of tax administration, collection and audit” was precisely what the Legislature’s blue-ribbon Task Force on Structural Changes in Budget and Tax Policy recommended in January 2017.

Though having the state handle all sales taxes seems an easy enough solution, the policy opens a lot of concern for municipal governments, parish police juries, school districts and other local taxing authorities. Many local officials believe the energetic efforts to adhere to the Supreme Court’s ruling will create a centralized system that could expand to interfere with their main source of revenues to pay for law enforcement, firefighters, roads, schools and other local services.

“We need a more centralized system to do this,” Robert Scott said about taking advantage of collecting taxes on internet sales. He heads the Baton Rouge-based Public Affairs Research Council of Louisiana, which has studied Louisiana government policy for 68 years.

“The more complicated your system is and the more indefinite it is, the more likely it might be that there is interference with free commerce,” Scott said.

“That was their position 10 years ago. It’s a political argument and that has nothing to do with Wayfair,” said Dan Garrett III, a Baton Rouge lawyer who has lobbied for municipal governments, parish police juries and school boards.

“I don’t think there is anything we need to change,” Garrett said. Newer and more efficient technology has softened historical arguments that both state and local sales taxes can’t be easily collected and remitted.

He points to the way vehicles are sold. When a Baton Rouge consumer buys a pickup in suburban Ascension Parish, where a lot of dealerships have relocated, the salesman types in the buyer’s address for registration purposes. The software automatically calculates the appropriate Baton Rouge taxes, then electronically remits the money to the state and local tax collectors.

Any litigant challenging the state’s system as it is organized now would have to overcome the experience of auto dealers as well as that of Amazon, Wayfair and other vendors that already have started collecting and remitting sales taxes.

“What they would have to allege and prove is that the Louisiana system is overly burdensome,” Garrett said. “It’s hard to show a burden when it has worked so well already.”

The Supreme Court majority in the Wayfair case listed criteria, such as excluding those with limited business and no retroactive collections, that could allow collecting taxes from a business not located in the state and still be constitutional under the Commerce Clause, which protects business conducted across state lines. The standard, which is not well defined, is whether the system is too burdensome on out-of-state vendors.

Louisiana legislators passed a state law earlier this year that tracks most of the high court’s recommendations, including giving the newly formed Louisiana Sales and Use Tax Commission for Remote Sellers authority to administer, to collect and to remit taxes on sales over the internet from companies without a physical presence in the state.

Sales tax on your internet purchases coming soon: Details on timing, how system will work, more

Louisiana consumers should get another Christmas where taxes aren't collected on many internet purchases. But after the beginning of the new y…

The commission is wading through the state’s complex and overlapping laws to set up the system and also gathering information on software programs that out-of-state retailers can use to determine the appropriate tax rates for where the item is delivered. Combined state and local taxes, for instance, are 9.45 percent on every dollar spent in New Orleans and 9.2 percent in Metairie.

“The commission is on track to have the necessary technological and administrative structures in place by January 2019,” Revenue Secretary Kimberly Lewis Robinson said in an email.

John Gallagher, executive director of the Louisiana Municipal Association, said local governments are open to the centralization idea, but everything depends on the details.

“Locals, as a whole, are concerned about the state taking over the entire collection,” Gallagher said.

Unlike most states where the various levels of government have well-defined areas of authority, Louisiana has had top-down rule almost since its inception. Some local and parish autonomy is allowed but is bridled by state law.

Sales taxes account for 40 percent to 60 percent, depending on the jurisdiction, of a local government’s revenues to pay for services. Locals are wont to cede too much authority to the state.

It’s not so much how the tax revenues are collected but how they are distributed. If the money goes into the state treasury, only the Legislature could authorize its dispersal. At best, the locals would have to wait until the spring, when the Legislature meets, to get their money.

That means state lawmakers could redirect the money and take away the voice of local voters, who approved a tax for a specific purpose, Gallagher said.

“I’m not saying they would do that, but there’s always been that fear,” Gallagher said. “We’re open … but we need to see what’s developed.”

Mark West, executive director of the Louisiana Association of Tax Administrators, which represents the folks who collect and remit the taxes, is cautious as the state is setting up this system using only high court clues.

“Absent an act of Congress, the state of Louisiana and local governments are going to have to struggle with making sure that any system that we set up does not cause us to be challenged in the courts,” West said.

While the name may confuse some as the restaurant is blocks removed from its namesake, Kitchen on Klinton, which opened on Aug. 31, is the cul…

PetroQuest Energy Inc. in Lafayette has reached an agreement with lenders that gives it a second grace period on an overdue payment on its debt.

How I Got Here: Lisa Prejean with Prejean Creative

My four siblings and I grew up in north Lafayette. Our mom was a homemaker and community volunteer; our dad was an attorney. We spent a lot of…

Once an issue: What has happened with efforts to cut Louisiana state contracts?

In a cycle of budget crises, Louisiana leaders said two years ago that the state should reduce the number of outside contracts the state has t…

Charging internet sales tax in Louisiana might be much more complicated than you think...

Louisiana is setting itself up for a massive lawsuit if the state, as planned, starts charging sales taxes on internet purchases Jan. 1 and do…

Ten states began charging sales taxes on Internet purchases Monday, but Louisiana wasn't one of them because leaders are still working on effo…