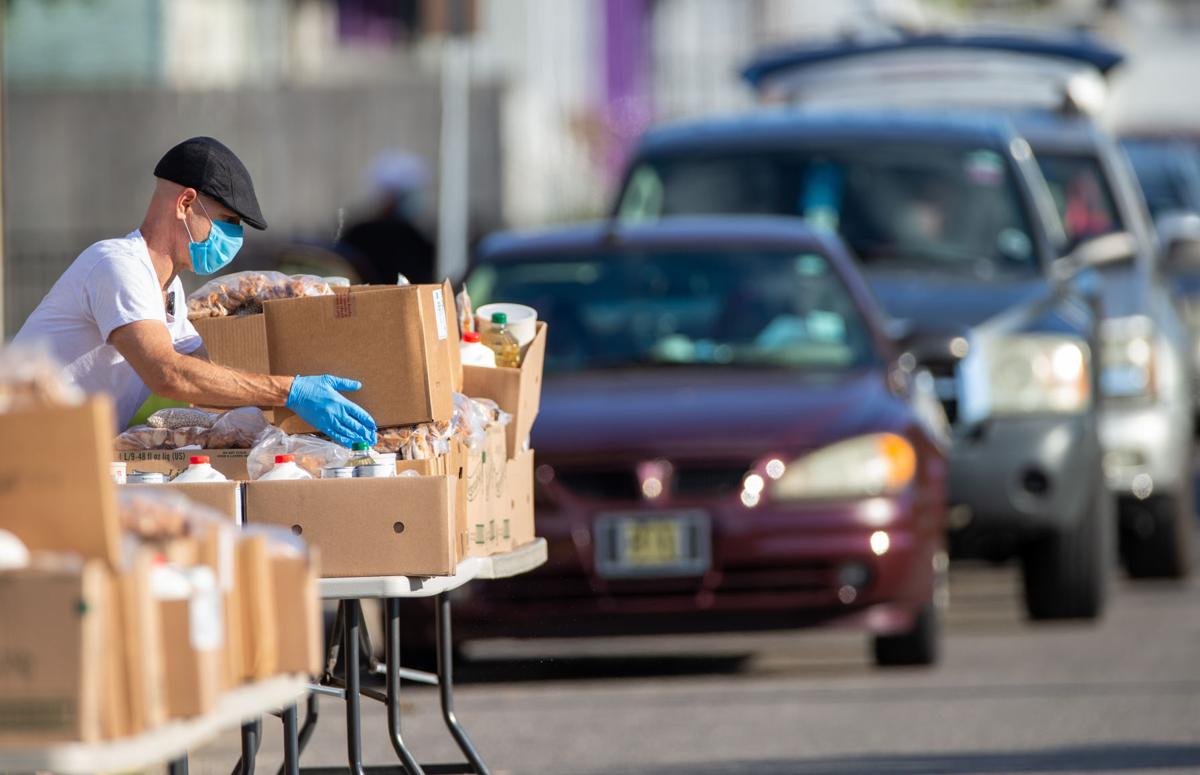 Culture Aid Nola distributes 10,000 pounds of food to New Orleans residents at Our Lady Star of the Sea church, 1835 St Roch Ave. Monday, May 4, 2020. CAN is no-barrier aid, meaning no paperwork or ID is required to access resources. Culture Aid Nola has distributed just under 40,000 meals since forming at the end of March in response to the COVID-19 crisis. CAN works with local businesses, city council members and non-profits to provide direct food relief , medicaid access navigation, reliable verified health information, aid navigation and other services. CAN also anticipates opening its 4th weekly food pantry soon, which will enable us to serve over 6,500 meals per week. (Photo by David Grunfeld, NOLA.com, The Times-Picayune | The New Orleans Advocate) 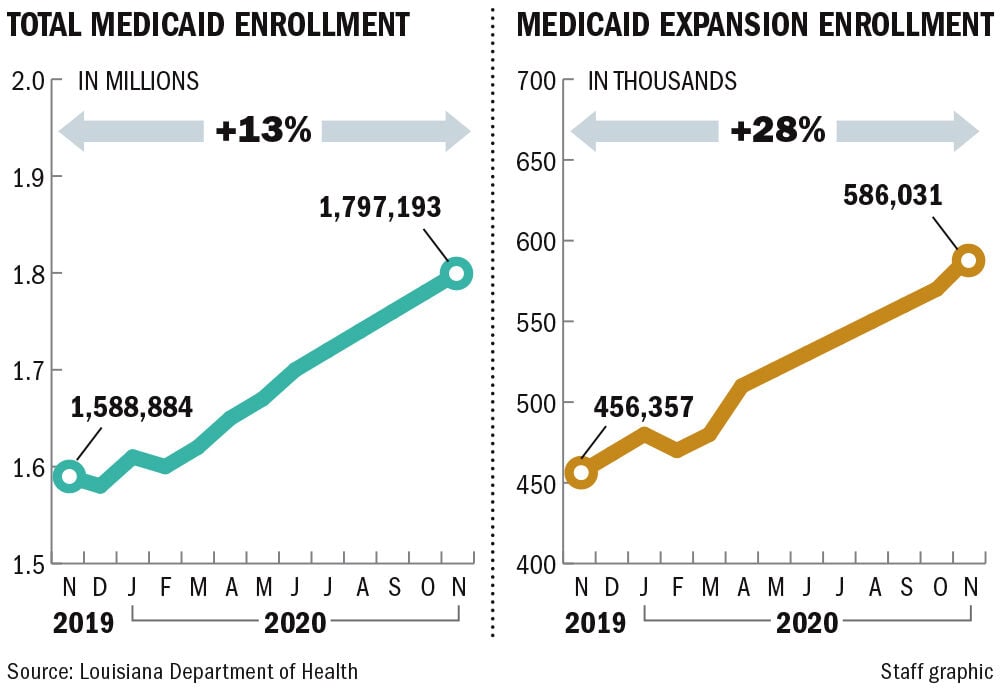 Medicaid rolls soar in Louisiana: Federal rules prevented the state from kicking people off the rolls, leading to a 13% surge during the pandemic.

In February, weeks before Louisiana would discover its first case of COVID-19, the Louisiana Department of Health sent out letters to 24,000 Medicaid recipients, warning they would be kicked off the rolls if they didn’t respond and prove they qualify for the program.

The letters were part of a stricter eligibility system installed a year earlier, which checked the wages of all enrollees every few months, and required them to prove they didn’t make too much money to qualify. As a result, enrollment fell and remained consistently lower than before.

The pandemic prompted a complete turnaround.

After seeing enrollment in the government health insurance program drop by about 3% from 2018 to 2019, the pandemic and coronavirus response legislation passed by Congress caused a spike in Louisiana’s Medicaid population. The number of people covered by the program surged by more than 208,000 from November 2019 to November 2020. That’s a jump of about 13%.

In all, nearly 1.8 million people in Louisiana – about 39% of the state's 4.6 million residents – were receiving Medicaid as of last month.

The increase in Medicaid expansion, a part of the Affordable Care Act that Gov. John Bel Edwards put in place shortly after taking office in 2016, was even more dramatic. The number of people receiving insurance from expansion jumped by 116,128, a 25% increase. Expansion covers adults who make up to 138% of the federal poverty line. That’s up to $1,468 monthly for an individual or $3,013 a month for a family of four.

The spike in claims further reveals the scope of the pandemic’s toll on people across the state, many of whom turned to the government health insurance after being laid off.

“We know very well when the economy goes south the demand for public services increases,” said Jan Moller, head of the Louisiana Budget Project. “It’s perfectly understandable and rational that more people would qualify for coverage.”

“This is exactly what the safety net is designed to do, is to pick people up and give them something as basic as health care access at a very uncertain time.”

An historic number of Louisiana residents lost their jobs this year, as the pandemic and government restrictions hammered employers. Moller noted thousands of people dropped out of the labor force entirely, many because they had to take care of children at home with schools closed or shifted online. It’s also possible healthy people who previously qualified for Medicaid because of their low incomes signed up because the pandemic highlighted the importance of having health coverage.

How did Louisiana reach 250,000 confirmed coronavirus cases? Here's a timeline

Congress in the spring passed legislation that gave Louisiana and other states more money to pay for their share of Medicaid. The Families First Coronavirus Response Act increased the federal match rate by 6.2% for Medicaid, not including the expansion group. That generated about $283 million in savings to the state general fund in the fiscal year that ended this summer, according to state Sen. Sharon Hewitt’s office. Hewitt, a Slidell Republican, chairs the Medicaid Forecasting Panel.

In the current fiscal year, the savings totaled $440 million. The state Legislature used much of the money to pay for other spending priorities, like the state’s bankrupt unemployment trust fund.

In exchange for the windfall, Congress told states they can’t kick people off Medicaid during the pandemic, unless recipients move, die, or request a voluntary termination of their coverage, according to the Kaiser Family Foundation.

That meant the state suspended the stricter wage verification program, which critics said kicked many people off the program simply because they didn’t fill out paperwork more frequently. Republicans who have hammered the Health Department for what they say is fraud in the state’s program have said the stricter checks are a safeguard against people gaming the system.

Tara LeBlanc, interim executive director of Medicaid at the Louisiana Department of Health, said approximately 160,000 people being covered by Medicaid are ineligible. The agency is working with the feds on how to “end coverage” for people once the federal public health emergency ends.

Hewitt, the chair of the Senate Republican delegation, said Medicaid was designed as a safety net for people who need health coverage during tough financial times.

“I can’t think of a more challenging financial climate or a bigger need for health care resources for our families than the current COVID pandemic,” she said. “Once this public health emergency is over and we get our people back to work, I look forward to working with the Department of Health to identify those individuals who may have needed Medicaid in 2020, but now have employer-sponsored insurance or are able to purchase health insurance on their own.”

Between mid-March and late October of this year, 71,848 people approved for Medicaid were in a household of someone making unemployment claims because of the pandemic, according to Hewitt’s office.

Enrollment trends for another piece of the Affordable Care Act, the individual exchange where people who don’t qualify for Medicaid or receive coverage from an employer can buy health insurance, is less clear.

Becky Mowbray, a spokesperson for the Louisiana Department of Insurance, said in an email new enrollments are down and renewals are significantly up so far, which is consistent with COVID-19-related job losses triggering special enrollment periods for people and increasing enrollment. But full data that captures the bulk of the individual exchange population, those who renew automatically, isn’t available yet.

Data from the U.S. Centers for Medicare and Medicaid Services shows enrollment through five weeks was roughly on par with the same time period last year in Louisiana. In 2020, the number of people signing up for insurance through the individual exchange fell to its lowest point on record for a second straight year, as Republicans sued to toss the Affordable Care Act.

Moller said he’s “extremely concerned” about what happens when the public health emergency ends and potentially hundreds of thousands of people receiving Medicaid in Louisiana will likely be disenrolled from the program.

“We want to make sure it’s done in the most orderly careful fashion possible and they don’t just dump tens or hundreds of thousands of Medicaid beneficiaries off the rolls” because of paperwork issues, he said.

As pandemic tears through Louisiana's economy, Medicaid enrollment surges by 208,000

In February, weeks before Louisiana would discover its first case of COVID-19, the Louisiana Department of Health sent out letters to 24,000 M…

Amazon has closed on the deal to buy land at the former Evangeline Downs racetrack site for a 900,000-square-foot fulfillment center, a source…

When the coronavirus pandemic hit the in March, Lafayette-based VieMed Healthcare became a go-to source for much-needed ventilators.