Legislation that would carve out new protections for doctors accused of wrongdoing is swiftly moving through the State Capitol, despite raising alarms over whether it could make the public more vulnerable to bad doctors.

Senate Bill 286, dubbed The "Physician's Bill of Rights," passed the Senate in a 36-0 vote on Tuesday. It would require the Louisiana Board of Medical Examiners to overhaul the way that it investigates complaints against physicians — eliminating the ability to use confidential sources and giving doctors new pull throughout the investigation process.

While it has drawn no formal objections during its vetting in the State Capitol this session, SB286, has drawn the attention of a national consumer advocacy group that says it "would substantially impede" the state board's ability to protect the public from bad doctors.

Drs. Michael Carome and Sidney M. Wolfe, of the Washington-based Public Citizen, wrote in a letter to state legislators that outlawing confidential sources could have a chilling effect on investigations.

"Many individuals who are in a position to witness physician misconduct are afraid to use their names when reporting serious concerns about physicians," the letter reads. "This is particularly true when physician impairment, incompetence, or unprofessional conduct is witnessed by a spouse, family member, colleague, nurse or employee of the physician.

"Precluding the acceptance of anonymous complaints and the maintenance of confidentiality of persons who submit non-anonymous complaints will endanger the public and serve to protect impaired, incompetent, or unprofessional physicians," they added in the letter dated Tuesday.

A spokesman for the Federation of State Medical Boards said the national non-profit is "unaware of any similar pieces of legislation that have been introduced or passed in any other state."

Effort in the work for months

The legislation is supported by the Louisiana State Medical Society, which advocates on behalf of physicians in the state.

A political action committee linked to LSMS reported in its most recent filings with the Louisiana Ethics Administration that it represents about 300 members and had more than $187,575 cash in its political coffers as of the end of March.

One of the key points being used to push the legislation is the number of doctors who have committed suicide after or during investigations launched by the Medical Examining Board.

Louisiana State Medical Society lobbyist Jennifer Marusak, who did not speak during last week's hearing but submitted a card in support, sent an email in July to several legislators, as well as prolific Baton Rouge lobbyist Alton Ashy, imploring action on the "horrific process" after the suicide of a physician from Shreveport.

"I haven't slept in two days now," Marusak wrote in the letter, which was read during the SB268 hearing. "I thought (the Legislature) passed legislation that would 'fix' things at the (Board of Medical Examiners) three years ago."

"I know exactly what he did inappropriately but it should have never have led to this. I am out for blood now," she wrote.

The board later wrote a lengthy letter refuting allegations in Marusak's email, and Marusak wrote a retraction to the recipients saying she was "emotional" when she penned the initial email.

Marusak, who declined to comment on this article, had written in her initial email that she hoped that Gov. John Bel Edwards would support the effort to change the board's investigative process.

Edwards said in an interview with The Advocate on Friday that he wasn't prepared to take a position on the "Physician's Bill of Rights." In response to a follow up email Tuesday, Edwards deputy chief of staff Richard Carbo said the governor has not yet been briefed on it nor taken a position.

"Careers have been destroyed — doctors are dead," he said on the Senate floor Tuesday. "This bill protects doctors, and it protects the patients that love them and need them."

Last week's hearing on the bill often veered to the personal, naming Dr. Cecilia Mouton, director of MBE investigations, for a series of perceived ills.

Mouton, who declined to comment for this article, previously served in the dual role of board director and investigations director and has drawn the ire of several doctors who have had their licenses suspended.

Dr. Greg Stephens, who is now practicing in Arkansas because he is no longer allowed to practice in Louisiana, had to be asked repeatedly during last week's committee hearing to focus on the legislation and not Mouton.

“We give criminals and terrorists more due process than we give doctors,” Stephens said.

Records show that Stephens was accused of leaving pre-signed prescription pads unattended, prescribing to family members without adequate documentation in their medical records and "performing a minor office procedure on a patient in the clinic without appropriately documenting such in the medical record or assuring that the office was able to comply with requirements for any untoward complications."

Records also show that during his suspension process, Stephens was represented by Rep. Katrina Jackson, a Monroe Democrat who is also pushing a change to physician investigations this session.

Despite objections that the public would become more vulnerable to disreputable doctors, legislation to provide physicians enhanced due proces…

Jackson's House Bill 778 is scheduled to be heard in the House Health and Welfare Committee on Wednesday. Jackson serves on the committee.

Another piece of legislation involving physician investigations, Sen. Dan Claitor's Senate Bill 277, also made it through the Senate on Tuesday. It would change the make-up of the Medical Examiner's Board and require the board to receive a complaint before any disciplinary proceeding can begin.

In an interview with The Advocate on Tuesday, Jackson said she has prepared a rewrite of her bill, but it would focus primarily on qualifications within the investigations division, including requiring the investigations director to be a physician who has practiced for five years and will report directly to the board.

The proposals come just three years after a new law meant to address how physicians accused of wrongdoing are sanctioned or cleared.

Jackson, who was one of the sponsors of the 2015 law, said she thinks it's reasonable to take a couple of tries to get things right.

She said she has continued to hear complaints from physicians who don't feel that they get due process under the current system.

Records dispute holds up audit of Louisiana medical examiners board

She said she doesn't believe that her previous work with Stephens presents a conflict to her bill and has no plans to recuse herself from votes on the legislation. As a criminal defense attorney, she said she often deals with legislation linked to her field and she has received nothing of economic value from the state board itself.

Jackson said she has no personal issues with Mouton.

During last week's hearing on his bill, Milkovich lodged multiple allegations against Mouton, citing Marusak's initial and since retracted email, as well as at least one lawsuit that was dismissed. While support at the Capitol has rallied around the proposed changes, others who have dealt with the system and spoke to The Advocate defended the current process and Mouton, specifically.

Lake Charles-area physician Dr. George Edmond Smith has found himself on the wrong side of the state board and its findings often have not gone in his favor.

"I can honestly say that Dr. Mouton has been supportive; she's been honest with me, she's helped me through many hurdles, and I think she has been there for me," he said by phone Tuesday. "I have nothing but support for her."

More than half of U.S. hospitals are turning to telemedicine to provide clinical services in a range of settings, in some cases enabling patie…

Smith said he has a history of alcohol and drug abuse for which he has sought treatment.

"I've been somewhat overwhelmed by (Mouton's) sensitivity toward my case," Smith said.

Another Lake Charles physician, who did not want to be named because he feared retaliation among peers, said he has not personally faced disciplinary action, but he worries about the impact that the legislation could have on the broader medical community.

"It's horrible — this whole notion of clipping the wings of the state medical board," he said.

He said that he believes confidentiality is important part of the process, as revealing sources could ultimately threaten nurses and others who want to come forward but fear retribution.

"This whole notion of complete transparency. ... If you live in a small community and you complain about a physician who is doing bad stuff, it sounds good in theory, but I'm afraid it just doesn't work," he said.

Eddie Castaing, a New Orleans attorney who has represented numerous physicians who have gone through the complaint review process, said he hasn't always won his arguments against board investigations, but he felt that Mouton, in particular, wanted to "do the right thing" for the doctors involved.

"In one instance, although she had to take strong action against the doctor, she was very concerned with his home and mental well being," he said by phone Tuesday. "In another case, she has instigated steps for the doctor to have proper rehab and care during a period of suspension to the end that the doctor is now recovered and practicing his profession.

"She's not a back slapper — she gets in there and tries to do what's right."

Another Louisiana attorney who has represented multiple doctors through the complaints process but didn't want to be named for fear of professional backlash also said he believes the process is fair.

"I would say that while it's not uncommon to have legal disagreements over whether conduct was sanctionable or whether the physician had done anything inappropriate, I always felt like we had a fair opportunity to discuss that," he said. "The vast majority of the cases that I was involved with were resolved without the need for litigation."

That attorney said he believed the board and the investigations division had set out to crack down on illegal pill mills that were flooding neighborhoods with narcotics and, in effect, have helped fuel the nations opioid epidemic. Sometimes they were misunderstandings.

"Dr. Mouton is zealous in addressing what she views as problematic conduct, but I also found her fair," he said. "After these discussions (doctors) would often agree to be more sensitive to the issue and reduce the number of opiates prescribed."

As for the confidentiality issue, that attorney was more sympathetic to the complaints that spawned the proposed legislation. He said he could recall some cases where doctors felt that they had been vindictively targeted with anonymous complaints.

But he still felt that the overall process was fair.

"I felt like I and the client had a fair opportunity to address the board's concerns," he said. 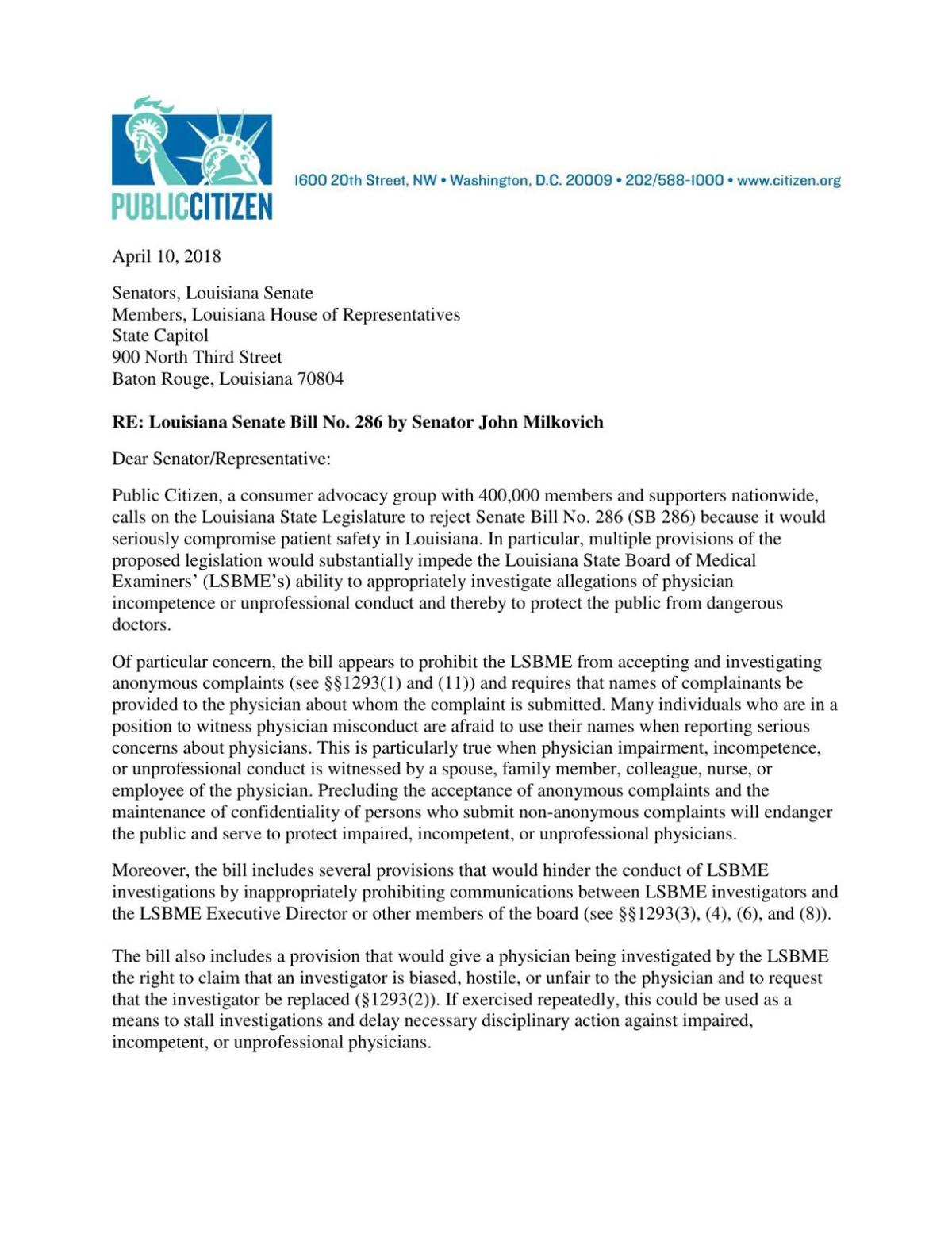 Another bill advances that would change investigations into doctor misconduct

Another bill that would change how physician misconduct is investigated in Louisiana is advancing at the State Capitol, despite some concerns …