As thousands of Louisiana seniors and people with disabilities begin receiving notices that they could soon be forced out of facilities because of the state's budget crisis, Gov. John Bel Edwards and House Republican leaders are again taking aim at one another — and getting national attention for doing so.

"This letter is scary, but it's not a tactic," Edwards chief budget architect Jay Dardenne said to a wall of cameras at a news conference Wednesday. "This is the reality that we are facing."

A few minutes later, House Republican leaders were at a news conference of their own, slamming the administration's decision to send about 37,000 letters this week to people who are at risk of losing health care services in the still yet-to-be-finalized budget that begins July 1.

"This is premature at best, reckless at worst," House Appropriations Chairman Cameron Henry, a Metairie Republican often at odds with the Democratic governor. "(Edwards') fix is to scare the elderly of this state, and that is an embarrassment."

Both sides appeared on CBS Evening News hours later. The outrageous story of the possibly that thousands of seniors could be kicked out of nursing homes has also drawn the attention of ABC's Good Morning America and other national outlets.

The Louisiana Department of Health is mailing the letters to people who rely on Medicaid health care programs deemed "optional" under federal guidelines as lawmakers continue negotiating spending priorities for the coming year. The recipients include about 18,955 nursing home residents and 2,691 community home residents with developmental disabilities.

"Our hearts are breaking over the need to do this," she said, at one point tearing up at the news conference alongside Dardenne. "We can't provide services with no money to pay for them."

The one-page letter that thousands will soon be receiving is written in a clinical style common of state government. It identifies the four potentially affected programs by name but isn't personalized enough to say which one the recipient falls under.

"Because of possible budget cuts, these programs may end as of July 1, 2018, but the federal government must first approve ending the programs," its second line reads.

It then explains that other programs may be available and they will hear back from the state Medicaid office with further details.

"As of today, there is no change in your Medicaid coverage," the letter continue. "You should continue to go to the doctor and use your benefits."

It further recommends that they apply for federal assistance and offers directions to do so. It also includes information about reaching out to the state Health Department's call center.

By most measures, it could easily read as a typical form letter — only in this case if its warning holds true, thousands of people could lose health care.

The Edwards administration has been sounding alarms for months that such notices would be triggered for nursing home residents, health care providers at risk of losing jobs and others affected by the threat of budget cuts.

The state faces about a $650 million "fiscal cliff" in the budget that begins July 1 because of temporary tax measures that will end June 30.

This week's letters are the start of a process, which ultimately would have to be approved by the federal agency that oversees Medicaid. Without that approval, the state could fall into deficit in other programs, Dardenne warned.

Your questions answered as Legislature eyes May 18 end to session, followed by special session

The regular session is scheduled to end June 4, but leaders have said they hope to be able to wrap up by May 18 to allow time for a special session to raise additional revenues. Currently, House Bill 1, which carries the state spending plan annually, is awaiting Senate action, with House leaders threatening that they won't end session early without its passage.

The Senate Republican Delegation released a statement calling the decision to send thousands of notices to Medicaid recipients "very premature.”

"Make no mistake, the situation is dire," the Senate majority caucus said in its statement. "There is just not enough money to go around. However, we in the Senate have no intention of putting Medicaid recipients on the streets or closing down medical schools."

It also reiterated plans to pass a budget proposal out of the Senate Finance Committee this week and take up the measure on the Senate floor early next week.

House Republican Delegation Chair Lance Harris, of Alexandria, similarly argued that the budget is only half-way through the process with lawmakers continuing to work, so the letters were not necessary at this time.

"It's an unnecessary political scare tactic done to intimidate and frighten the most vulnerable people into believing they will be kicked out onto the streets if the governor doesn't get everything he wants in the form of revenue," he said.

House Republican leaders, buoyed by news that the fiscal cliff is shrinking with a boost in revenue linked to the federal tax overhaul, have spent recent weeks signaling an openness to some sort of revenue replacement, though they haven't outlined a specific plan and their leaders were among those who voted down the proposals during the last special session.

"I will take a look at every tax," Henry said Wednesday. 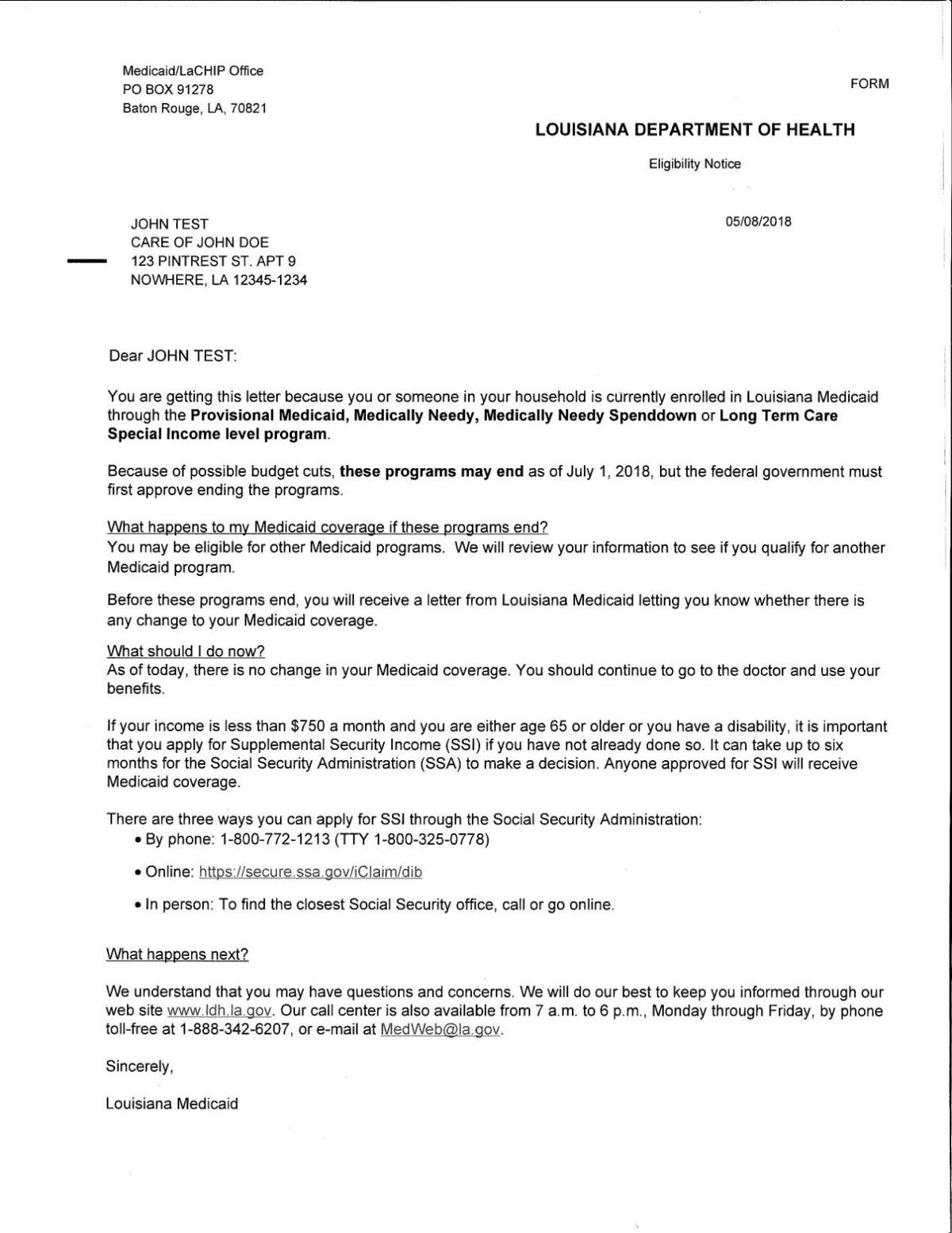 There are two ways to avoid scaring people.