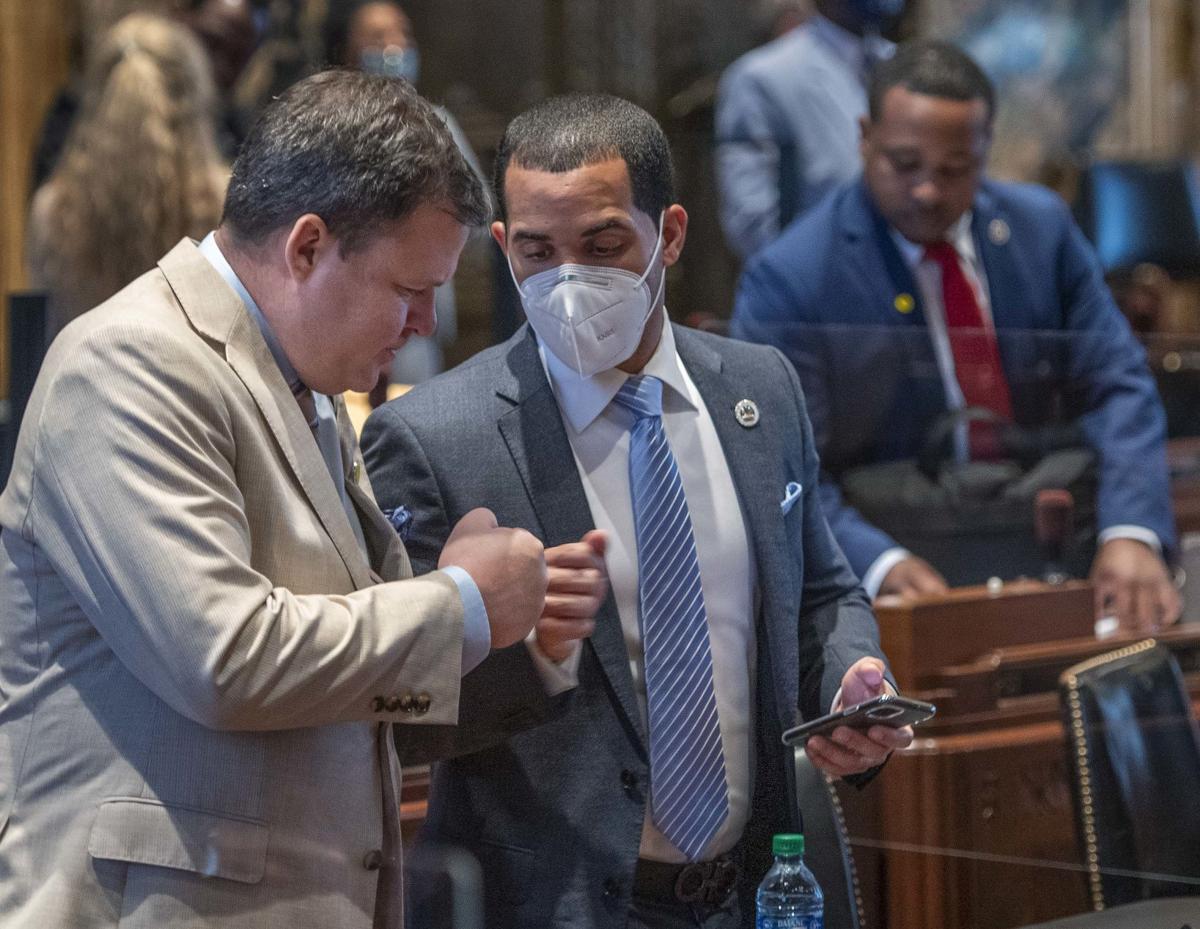 Saying goodbye until the next session, Rep. Stuart Bishop, R-Lafayette, left, and Rep. Matthew Willard, D-New Orleans, knock knuckles after adjournment during the last day of the special legislative session June 30, 2020. Bishop heads the tax-writing Ways and Means Committee, which will have principal jurisdiction over tax reform bills this year. 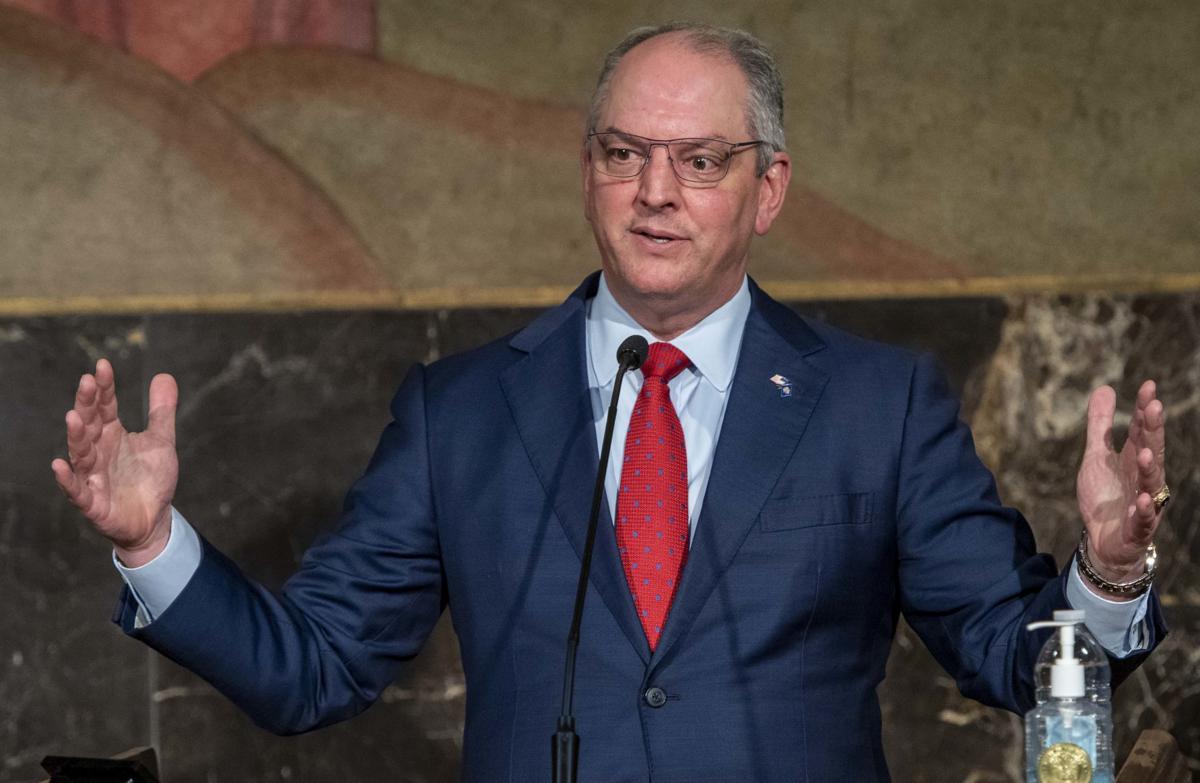 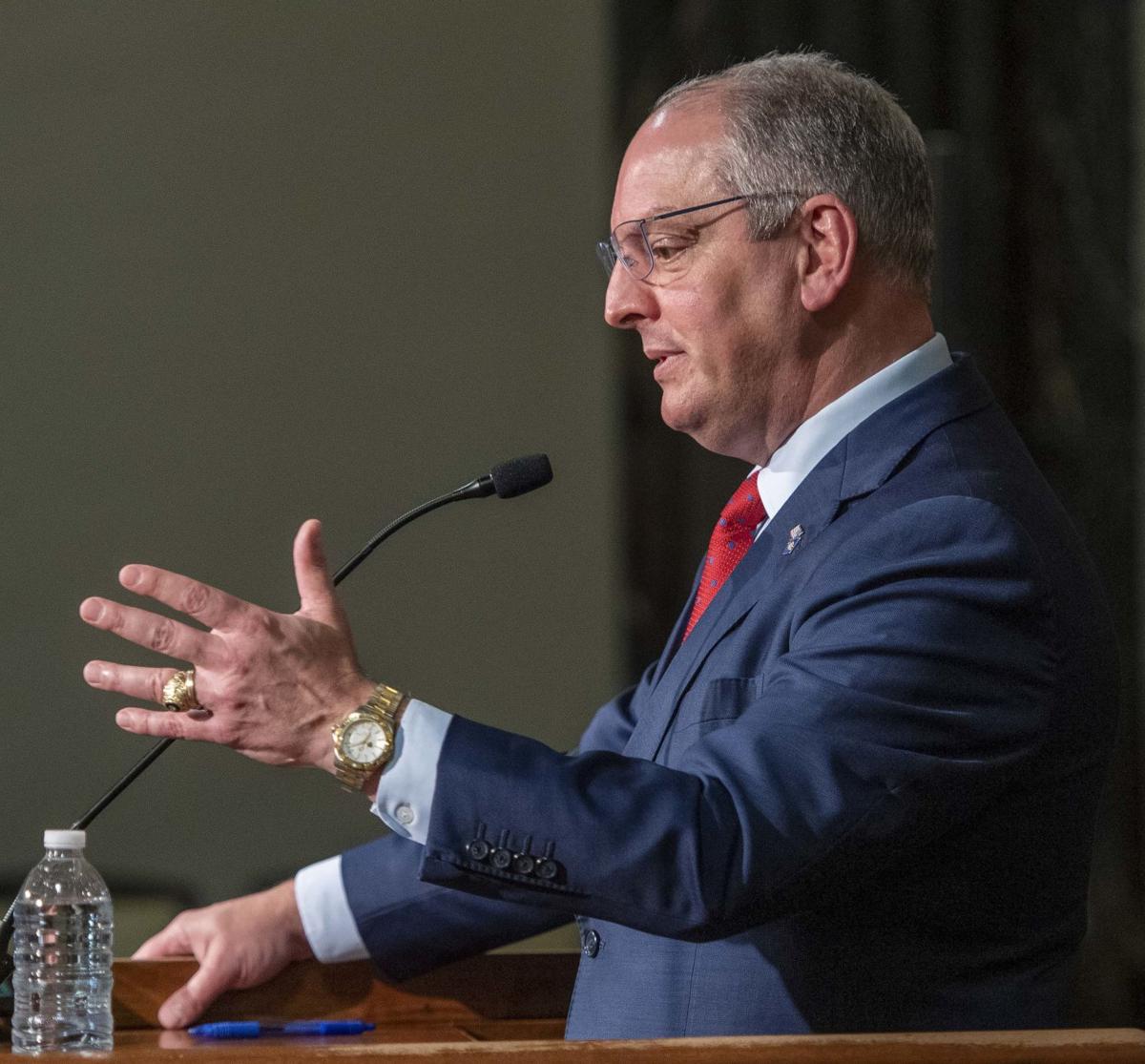 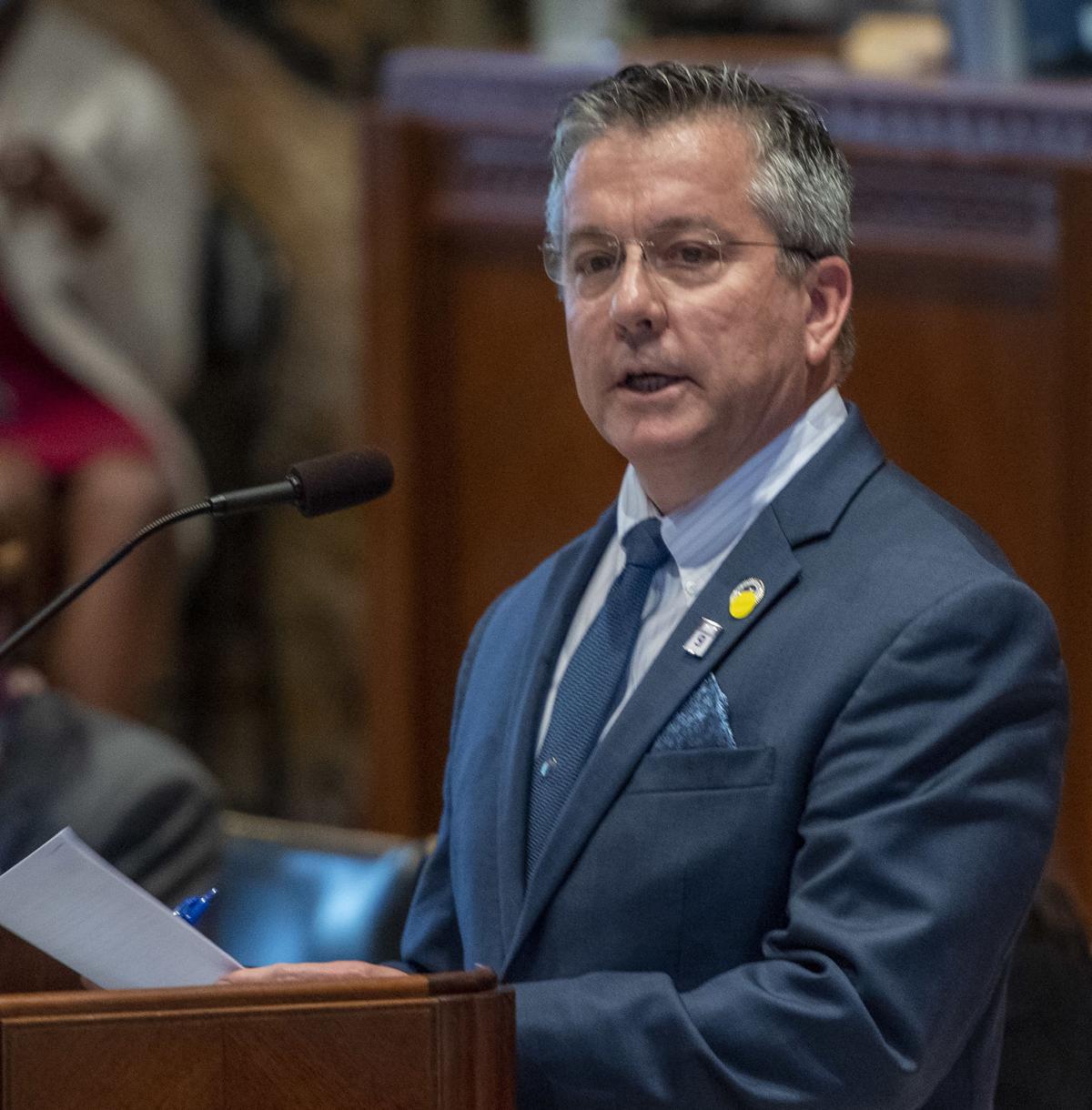 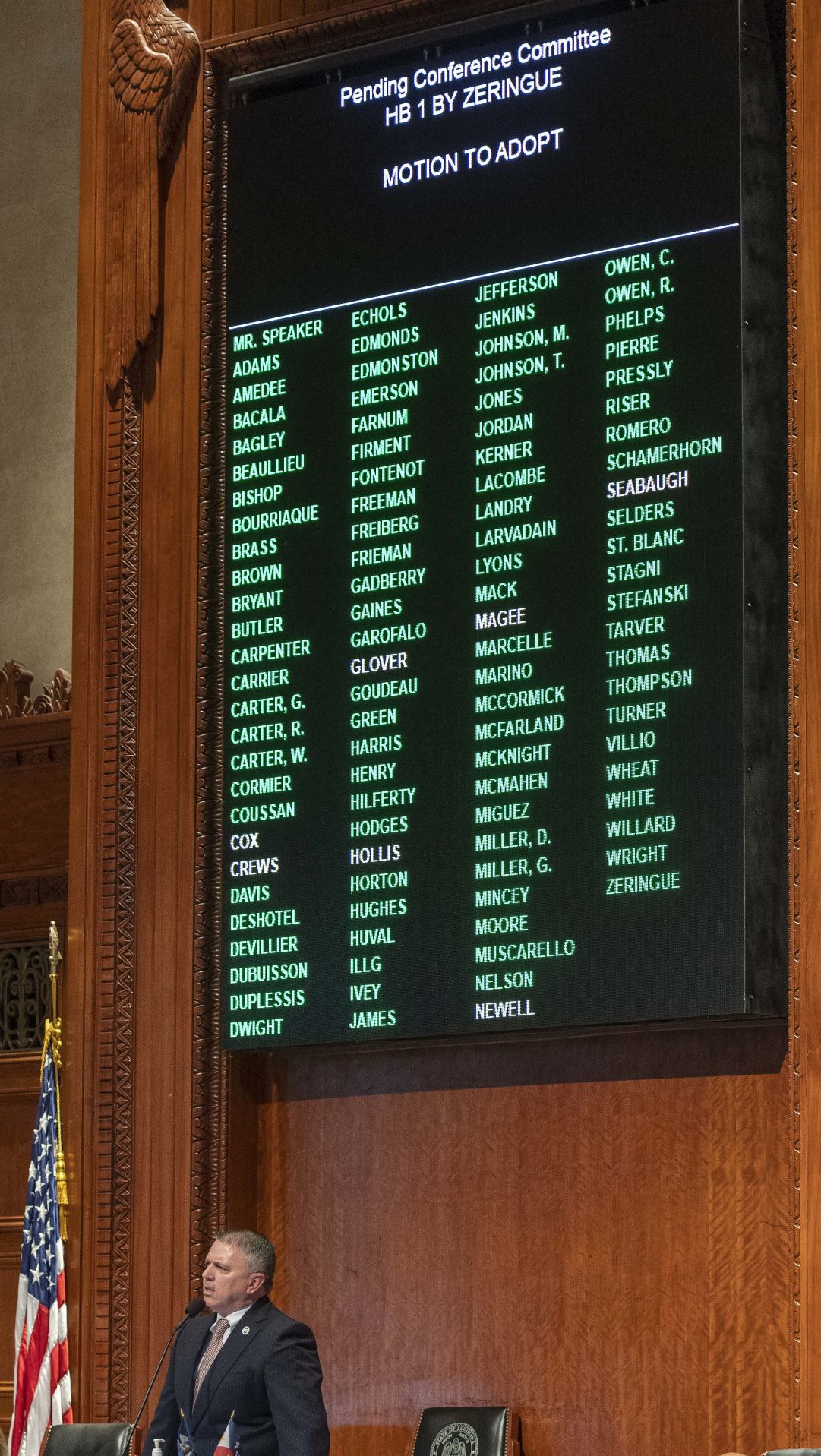 Speaker of the House Rep. Clay Schexnayder, R-Gonzales, announces the vote, 100-0, on HB1, the budget bill, during the last day of the special legislative session Tuesday June 30, 2020, in Baton Rouge, La. 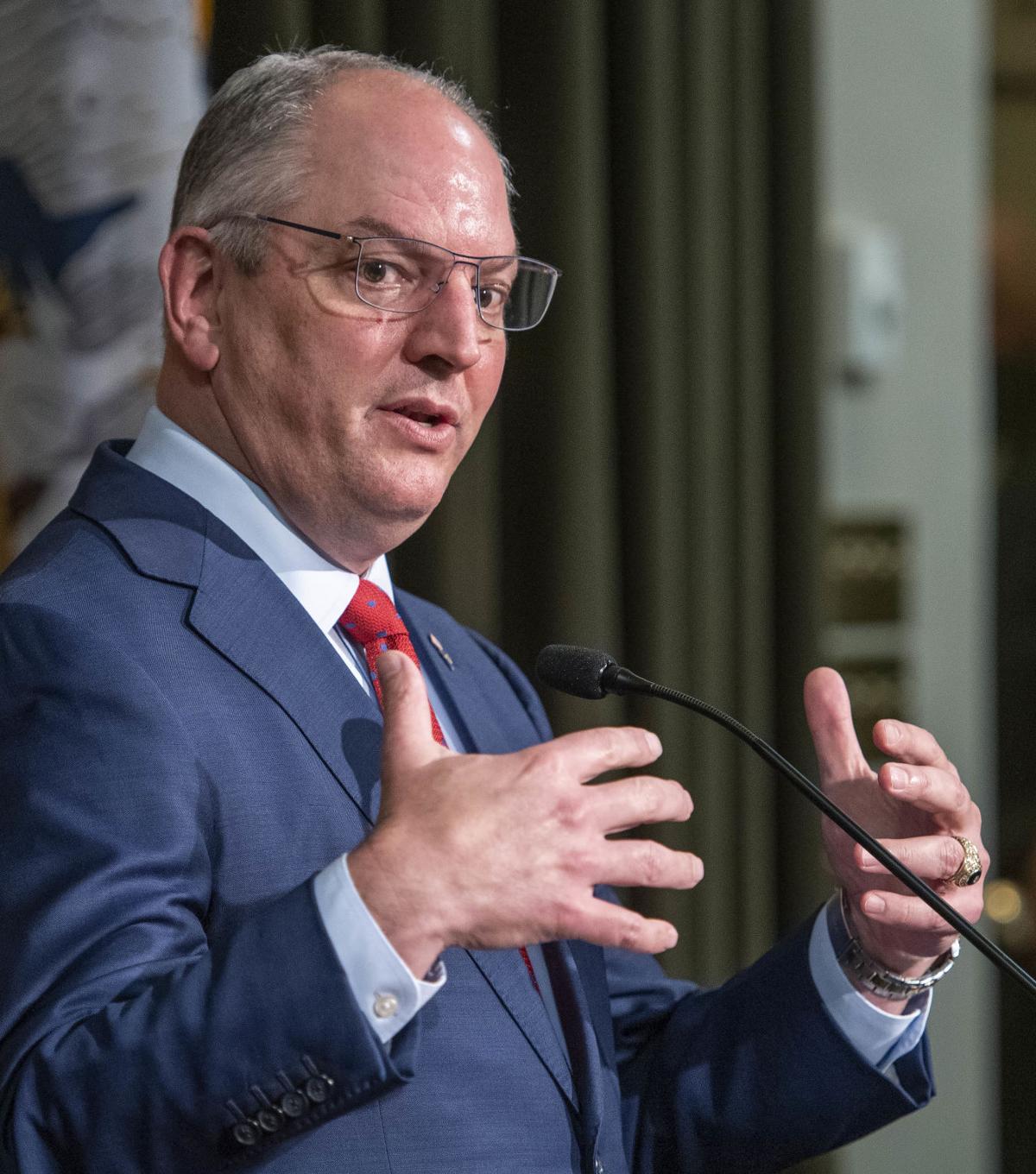 Saying goodbye until the next session, Rep. Stuart Bishop, R-Lafayette, left, and Rep. Matthew Willard, D-New Orleans, knock knuckles after adjournment during the last day of the special legislative session June 30, 2020. Bishop heads the tax-writing Ways and Means Committee, which will have principal jurisdiction over tax reform bills this year.

Speaker of the House Rep. Clay Schexnayder, R-Gonzales, announces the vote, 100-0, on HB1, the budget bill, during the last day of the special legislative session Tuesday June 30, 2020, in Baton Rouge, La.

Louisiana lawmakers Tuesday passed the state’s $35 billion budget that seeks to halt pay raises for state employees along with a flurry of other laws in the final hours of a month-long special session concerned partly with coronavirus recovery.

The budget bill was one of two major outstanding issues headed into the final day of the session, along with the No. 1 priority of business groups, changing the state’s legal system to reduce auto insurance lawsuits, which proponents argued would lower auto rates.

Lawmakers reached agreements on both issues in the hours before the Legislature was required to adjourn at 6 p.m.

The deal on the budget, which came a day before the new fiscal year begins, sets aside $60 million currently slated to fund pay raises for state workers. But it’s up to the agencies, and the State Civil Service Commission, to decide whether to ultimately freeze the raises. If they choose not to, the agencies will see their budgets cut until October, when lawmakers might return the money if the budget picture warrants.

Lawmakers have suggested they could return for another special session in October to either spend more federal coronavirus aid or make cuts if the budget situation worsens.

Republican senators sought to freeze pay for state workers because they didn’t want the state to hand out pay raises when businesses were suffering. Democrats pushed back, arguing the state shouldn’t punish workers amid a pandemic and economic recession.

But the state largely avoided serious budget controversies because of an influx of federal coronavirus aid. By the end of the special session, lawmakers had sent more than $900 million to plug holes in the state budget, up to $300 million to small businesses, more than $500 million to local governments and $50 million to front-line workers.

“For the most part we have essentially a standstill budget," said House Appropriations Chairman Jerome "Zee" Zeringue, R-Houma.

"Our federal partners came to the rescue to some degree," Senate President Page Cortez said in a press conference after the session ended.

Republican leaders at the press conference touted their moves to hold back some money, including the $60 million headed for pay raises, in case the financial picture worsens in the coming months.

In his own press conference, Edwards largely expressed support for the way the session turned out – though he said he was "disappointed" in the Legislature's attempted freeze on pay raises.

He said he thought the session lived up to its billing as aimed at coronavirus recovery, with lawmakers sending money to governments, businesses and a small amount for workers. He also said negotiations with Republican legislative leaders, who have presented a more unified front than any House speaker and Senate president in years, have gone well.

"In many ways it can actually be easier, so rather than everything being a triangular negotiation, it can be bilateral," Edwards said, adding he will sign a bill passed by the Legislature on "tort reform," a key priority of business groups.

The most significant moves made during the session came from Republicans and the business executives who set their agenda. The GOP-led Legislature passed a slew of tax breaks for businesses that will cost nearly $25 million in the fiscal year that starts Wednesday. Over the next five years, when including some extensions of existing tax breaks, the measures will cost the state about $227 million.

Republicans say the tax relief – along with a $300 million grant program for businesses they stood up – will help prop up companies amid a pandemic that has roiled the economy. Lawmakers and business groups have argued the proposals won’t ultimately cost as much as fiscal analysts say, because of the economic activity they will generate. The legislative analysts say it's hard to say exactly what the impact of many of the measures will be on the state budget.

Democrats, who are dramatically outnumbered in the Legislature but have one of their own in the Governor’s Mansion, pushed back on some of the tax breaks and other business-backed measures to little avail. They have cast the session as a bonanza for business lobbyists, who scored some long-time priorities, while saying it did little for workers. One exception is a bill that passed in the final days of session, pushed by House Democrats, to send $250 checks to up to 200,000 front-line workers who make less than $50,000 a year.

However, the $25 million cost of the tax breaks are estimated to have in the upcoming fiscal year is far less than the total amount that was introduced. Lawmakers sidelined some bills and pared back others to trim the cost down, and are paying for the tax breaks with unclaimed property receipts that became available in the final weeks of session.

Edwards said his office is unclear on how much the tax breaks will affect the budget given last-minute changes. He said while he is "concerned" on their impact on the budget in the coming years, he would not say whether he will sign or veto any of the bills.

Lawmakers arrived in Baton Rouge for the regular session on March 9th. But in the minutes before Edwards was set to kick off the session with his State of the State Speech in the House chamber, health officials confirmed the state’s first case of the novel coronavirus. By mid-March, the Legislature had adjourned over coronavirus concerns and didn’t return for good until May.

Republican legislative leaders took the unlikely step of calling themselves into a special session immediately after the regular session ended June 1 without coordinating with the governor, a show of legislative unity rarely seen in the State Capitol.

That came even after House Speaker Clay Schexnayder, a Gonzales Republican, won the speakership because Edwards helped line up the House Democratic caucus to vote for him. House Democratic Caucus Chairman Sam Jenkins said Monday said there were “some disappointments” with the caucus's level of input under Schexnayder.

“We’re very much concerned about committee makeups,” Jenkins said, referring to the partisan split on the panels that can decide a bill’s fate.

That didn’t happen, and instead Republicans and Edwards came to the table on things like the "tort reform” legislation to hash out deals, with both sides unsure if they would win a veto override fight.

For instance, House Ways & Means Chairman Stuart Bishop successfully took millions of dollars that Edwards wanted to use on construction projects and funneled them away into the state’s savings account. And in that construction budget, where governors historically have flexed their power by striking out projects from the districts of their political enemies, Edwards signed it without any such “line-item vetoes.”

Coronavirus is back 'with a vengeance' in Louisiana; officials are ramping up testing, enforcement

As Louisiana continues to experience worsening coronavirus trends, state and federal officials are ramping up testing sites and will start to …