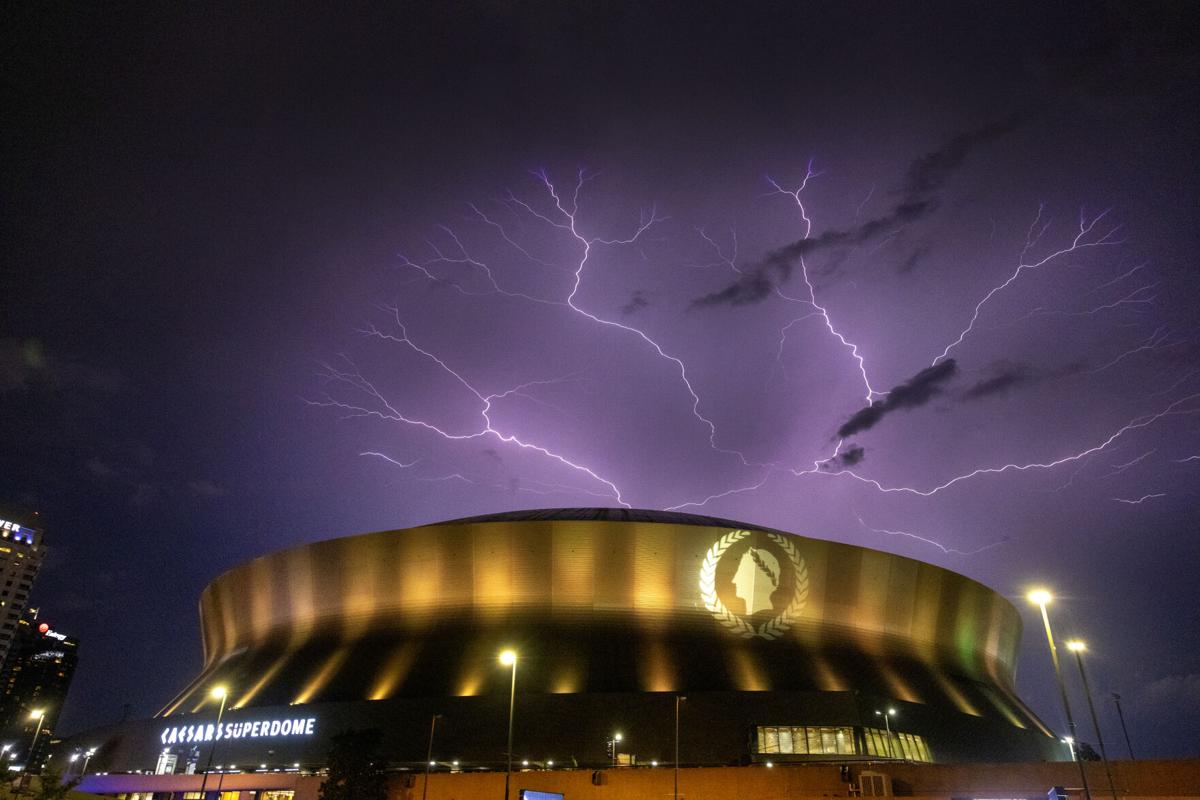 Lightning strikes over the Caesars Superdome as the Saints host the Jacksonville Jaguars for their preseason game on Monday, August 23, 2021 (Photo by Chris Granger | The Times-Picayune | The New Orleans Advocate) 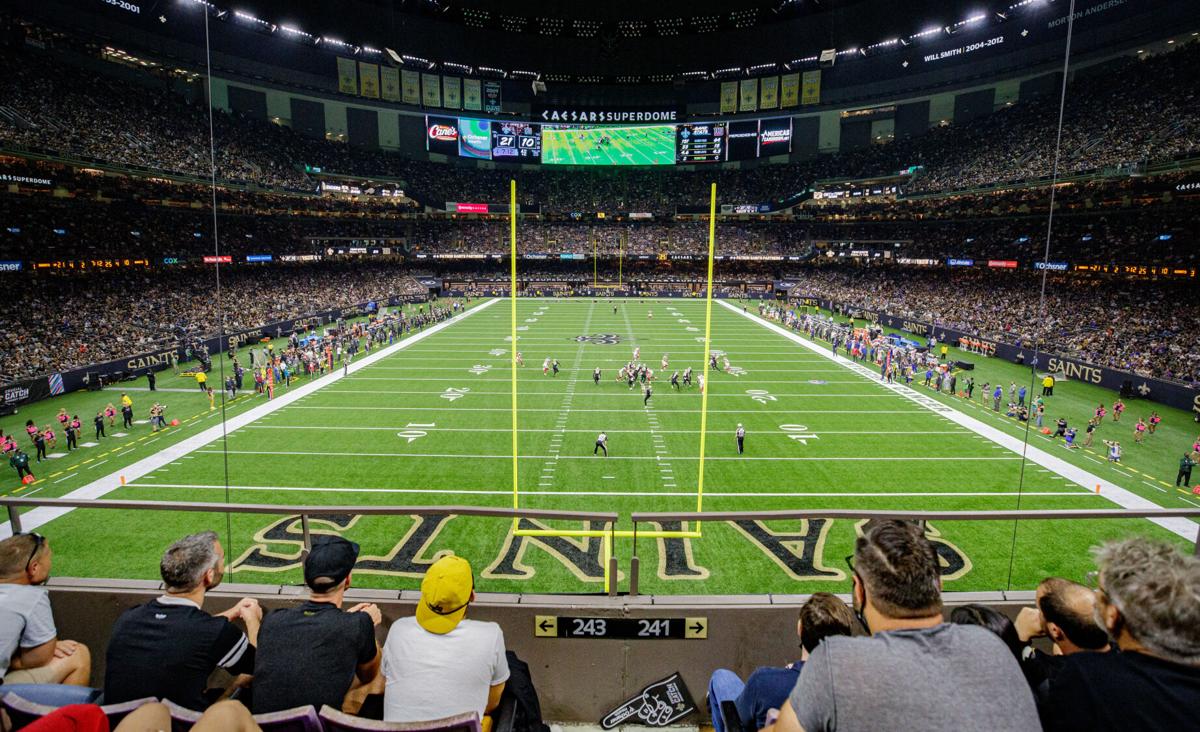 Lightning strikes over the Caesars Superdome as the Saints host the Jacksonville Jaguars for their preseason game on Monday, August 23, 2021 (Photo by Chris Granger | The Times-Picayune | The New Orleans Advocate)

With the topple of the first domino later this week in Baton Rouge, the Saints football team could either be in New Orleans for the next 30 years or headed out of town sooner than you think.

A simple yes by the State Bond Commission would start other pieces in a complex financial arrangement to fall – allowing contracts to be signed, renovations to continue, and eventually the Saints staying in New Orleans until 2055.

The Edwards’ administration is pressing hard for a favorable vote by November from the panel that oversees the state’s borrowing. The first step begins Thursday when the Bond Commission starts discussing the particulars.

“We’ve kind of reached a point now where we have to fish or cut bait,” said Commissioner of Administration Jay Dardenne. “And the way we make a commitment to this project is to have the Bond Commission vote for what’s called a ‘debt commute’.”

In theory, the State Bond Commission’s job is to ensure that political subdivisions have the wherewithal to borrow money, that the projects ar…

But the governor faces opposition from lawmakers weary of New Orleans demands and tired of subsidizing a football team owned by the widow of a billionaire car salesman, who in 2005 famously insulted Louisiana’s Capitol City.

Already, Bond Commission members have cited concerns about New Orleans administrative policies and are slow walking a legislatively approved proposal to use $25 million in the future for work on the Caesars Superdome.

At issue now is a different and far more intricate string from the same deal, with a pressing deadline. Its backing is far from assured.

“I have nothing against New Orleans,” said Lafayette Republican Rep. Stuart J. Bishop, who chairs the powerful House Ways & Means Committee and sits on the Bond Commission. “I just think we have to start looking at how we spend our money. How do you justify spending tens of millions for luxury suites that less than 1% of the people of Louisiana can sit in when you don’t have clean running water in the rural parishes?”

The Edwards administration argues that keeping the Saints allows New Orleans to compete for lucrative Super Bowls and other major sporting events.

Though the Saints are a small market team, the Superdome is within walking distance of hotels, restaurants, and all sorts of entertainment, which is one reason why New Orleans has hosted 11 NFL Super Bowls – a 12th is scheduled in 2025.

The 2013 Super Bowl in New Orleans had a $480 million economic impact with $35 million in direct tax payments to the state, according to the Division of Administration.

The Louisiana Stadium and Exposition District, which runs the publicly owned facility, contends that the Superdome is annually responsible for $578 million in economic activity, including $19 million in taxes.

Following the death of her husband, Tom Benson, Gayle Benson became principal owner of the Saints and the New Orleans Pelicans of the National Basketball Association. Last month, Benson, 74, announced the teams would be put in trust with the city as sole beneficiary upon her death.

The Succession: The future of the Saints and Pelicans in New Orleans

In this multi-part series, The Times-Picayune takes an in-depth look at the future of the city’s two major sports franchises in the fourth yea…

Saints owner Gayle Benson the only Louisianan on the Forbes 400: see where she ranks

New Orleans Saints and Pelicans owner Gayle Benson made the ranks of the famed Forbes 400 list, released today, and she is the only person fro…

The unveiling of the succession plan for the New Orleans Saints and Pelicans, along with the billions of dollars in regional charitable donati…

The state and the Saints are in the midst of negotiations over continuing the team’s lease with the Superdome, which expires in 2025. The terms being discussed would keep the Saints in New Orleans for another 10 years, with two 10-year renewals after that. The NFL prohibits teams from moving if it means breaking a lease.

“Those who have been critical of past relationships with the Saints, in some cases rightfully so,” Dardenne said, “should recognize this is truly a partnership going forward that has the Saints investing in a state asset, keeps them here with a lease until 2055, and recognizes Mrs. Benson’s stated estate plan, which requires the franchise to remain in New Orleans as a condition of purchase when the Saints are sold upon her death.”

But all that, particularly the lease, is predicated on state government committing to finish a $450 million modernization that would bring the 50-year-old facility up to NFL standards before the 2025 Super Bowl. That construction is half done. More luxury suites, a new entry lobby, further concessions upgrades, and other improvements still need to be completed.

In order to get started on the third and fourth phase to finish renovations on time, construction contracts need to be signed by Dec. 31.

The state legally cannot sign any contract until the money is in hand — and it’s not.

Approval of the “debt commute” by the Bond Commission would allow state government to use the money it's owed by the Louisiana Stadium and Exposition District, called LSED, for construction.

LSED Chair Kyle France limited his comments on the issue to voicing confidence that the state will get the deal done.

In August 2019, Louisiana agreed to renovate the Superdome at a cost of $450 million. The state would contribute $90 million, the LSED would give $210 million and the Saints, for the first time ever, would put up $150 million towards improvements.

Back in 2013, LSED had refinanced repair costs from Hurricane Katrina. Because so few buyers stepped forward, the state bought the LSED bonds, putting the Superdome about $60 million in debt to state taxpayers.

As part of the 2019 deal, the state sought approval to commute the LSED debt. The maneuver would allow the state to apply a little more than $60 million towards its $90 million contribution for the renovations and free LSED to use its money for construction instead of paying debt.

The Bond Commission and legislators wanted to look a little deeper before signing onto the complex “debt commute” idea in 2019. Then the pandemic hit and the issue lingered.

Attorney General Jeff Landry, who rarely agrees with Gov. John Bel Edwards, issued a five-page opinion on June 8 finding the debt conversion scheme is legal. “Essentially, instead of the district (LSED) paying debt service to the state, the district would be putting that money toward the Superdome,” the opinion stated.

LSED gets its funding from hotel/motel taxes in Orleans and Jefferson parishes along with fees for hosting events, plus money from what is called a bond anticipation note that allows spending cash now from the proceeds of a future bond. Revenues plummeted as the hotel/motel taxes went down 72% and self-generated income dropped 90% since all scheduled events were cancelled because of COVID.

Still paying off its 2013 debt to the state, LSED had to use all available revenues for operating expenses, instead of construction.

Now, the construction contracts for Phase 3 and Phase 4 need to be signed by the end of the year and neither the LSED nor the state have the money necessary to keep construction on track for completion by the 2025 when Saints lease is up and the Super Bowl is scheduled to come to town.

“There may be some in the Legislature who want to come up with one-time money, and if they commit to doing that, that would fine. But they haven’t yet and they haven’t committed because of the anti-New Orleans effort," Dardenne said. "We have to have the decision by the end of year.”

Kyle France: We need to continue to invest in iconic Louisiana Superdome

While the word "iconic" is tossed around freely, the Louisiana Superdome is the purest definition of the word. It is widely recognized and wel…