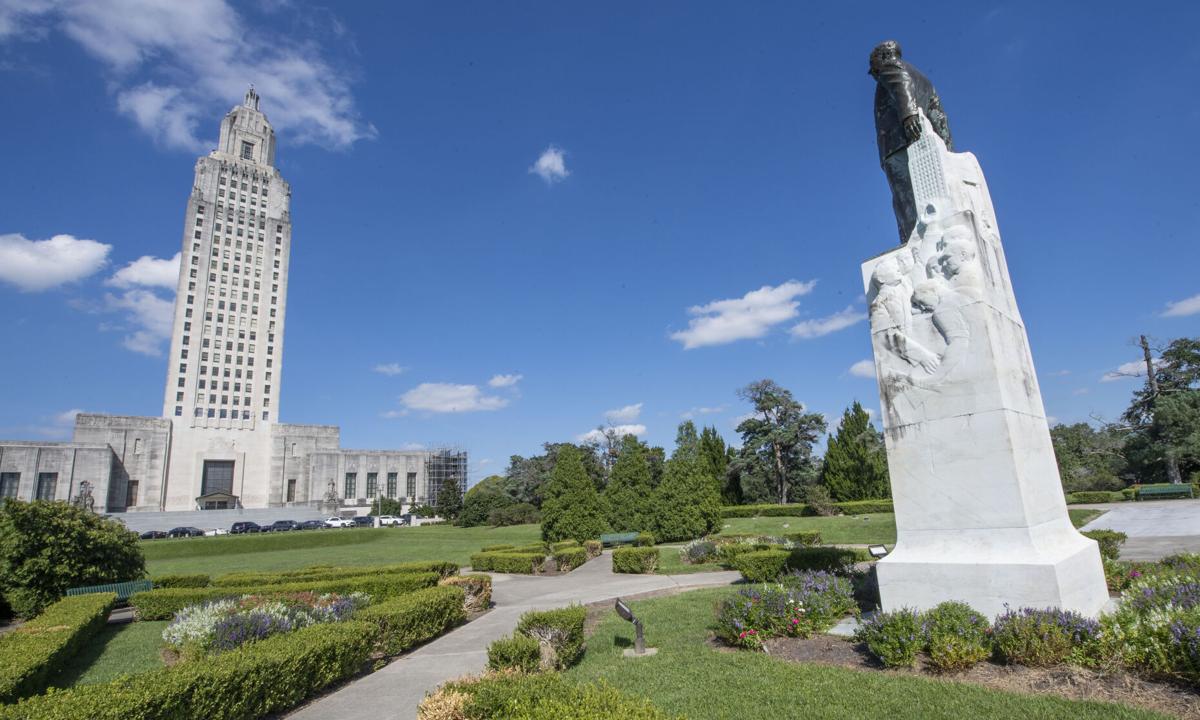 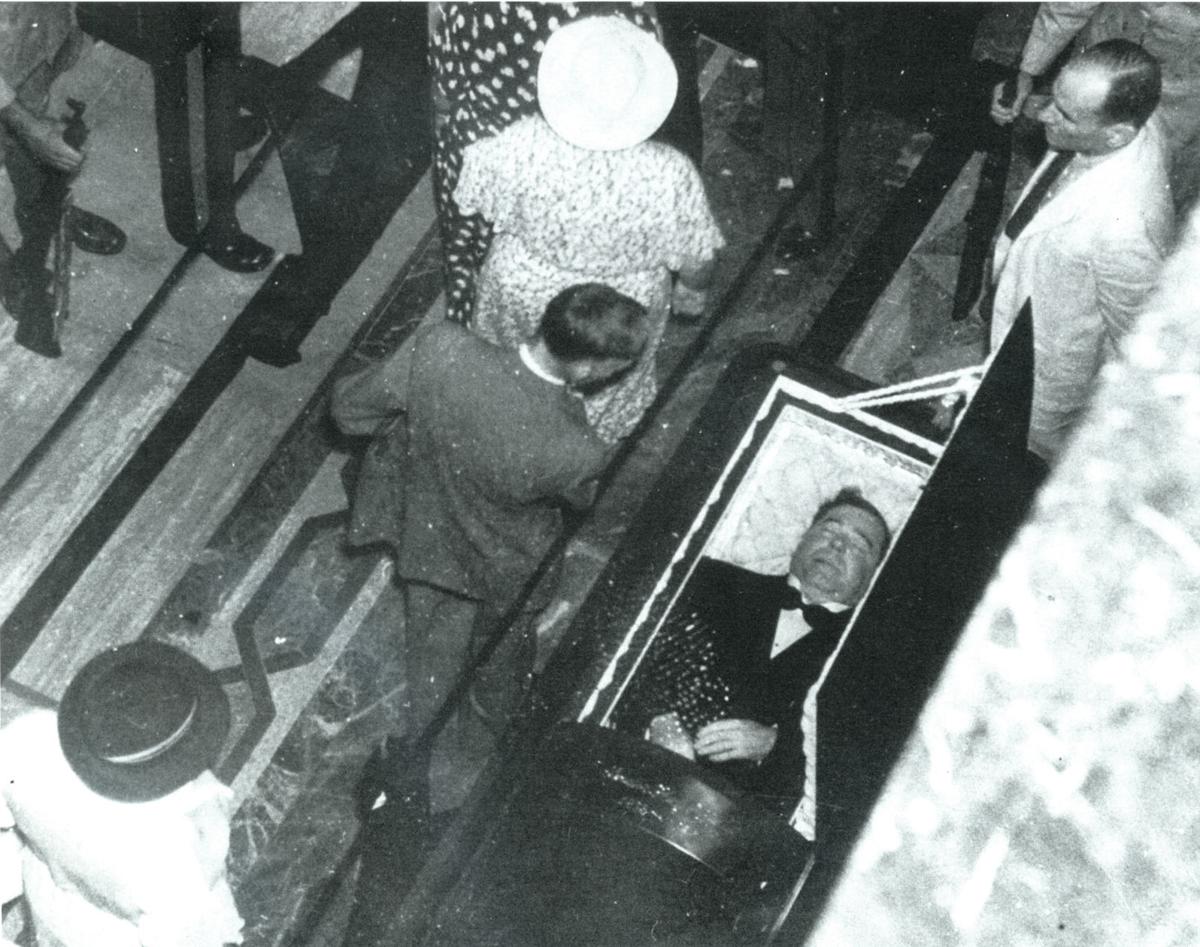 Mourners pause to pay their last respects to the late Sen. Huey P. Long as the body lays in state in the Capitol in Baton Rouge. Long was gunned down by an assassin in the hallway of the State Capitol during the special session of the Legislature in September 1935. 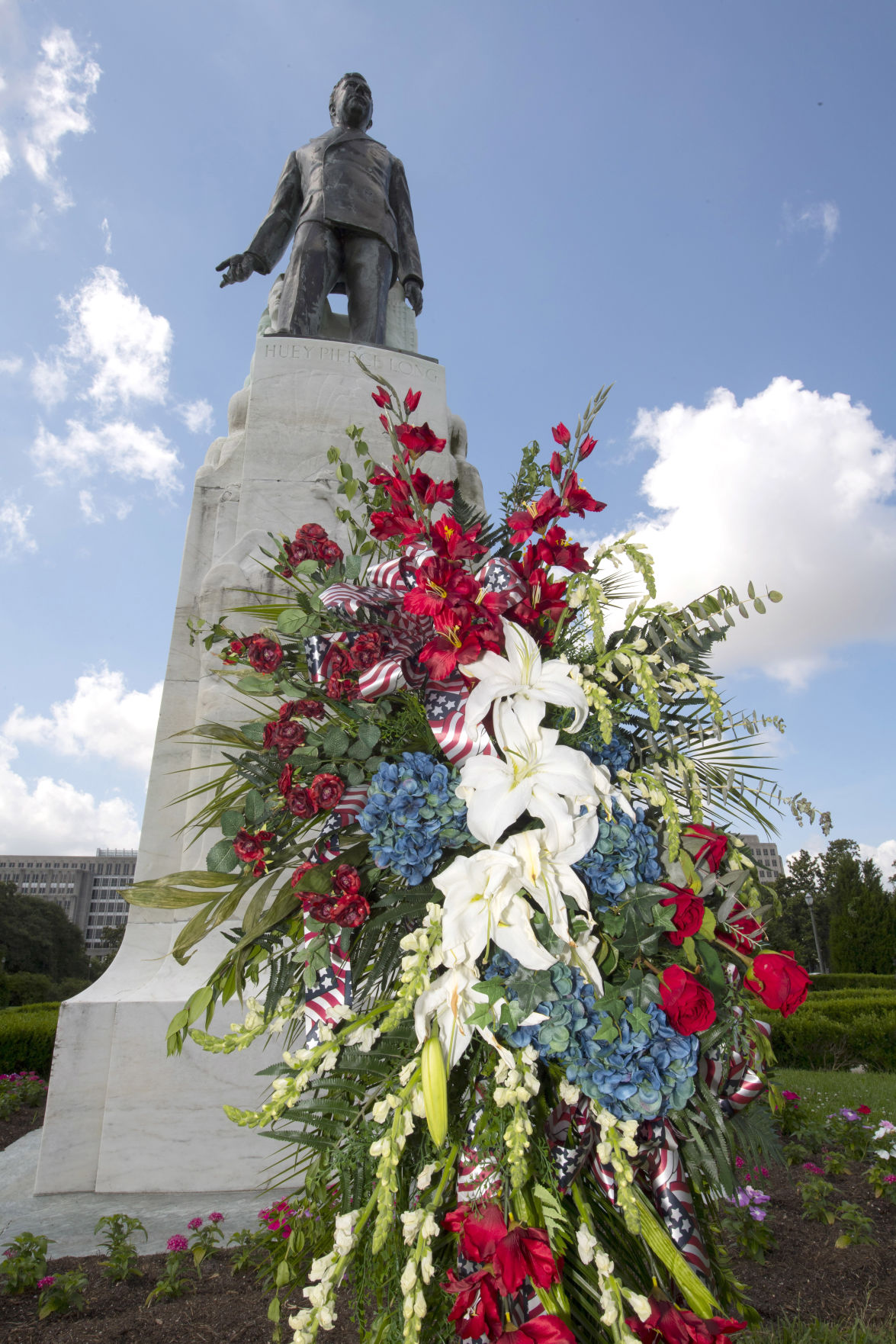 Wreath next to the statue of Gov. Huey P. Long, seen before the placement in the Capitol Garden of 11,000 flags in a 'Garden of Flags' representing Louisiana's fallen military service members since the Revolutionary War, Saturday, May 25, 2019.

Mourners pause to pay their last respects to the late Sen. Huey P. Long as the body lays in state in the Capitol in Baton Rouge. Long was gunned down by an assassin in the hallway of the State Capitol during the special session of the Legislature in September 1935.

Wreath next to the statue of Gov. Huey P. Long, seen before the placement in the Capitol Garden of 11,000 flags in a 'Garden of Flags' representing Louisiana's fallen military service members since the Revolutionary War, Saturday, May 25, 2019.

Trina Edwards, widow of the late Gov. Edwin W. Edwards, said the former four-time governor wanted to be buried near Huey P. Long in the park in front of the State Capitol.

Problem is, even with the Governor’s Office and the Speaker of the House’s Office looking into it, nobody is sure how Long’s grave ended up in Capitol Gardens. Turns out the Louisiana Legislature passed a non-legally binding resolution setting the location hours after the Kingfish died.

A north Louisiana representative said this week he is preparing a bill that would set aside, in law, a portion of the Capitol Gardens as a graveyard for Louisiana governors – all governors past, present and future. State Rep. Michael Echols, R-Monroe, said his effort isn’t aimed at Edwin Edwards, but his remains would be welcome.

The idea began several years ago on Echol’s morning strolls during legislative sessions. At the time, statues of past leaders were being taken down because of sentiments today about those figures’ actions in the past.

Late Gov. Edwin Edwards’ wife had his remains exhumed and cremated; his children are angry

About 10 weeks after former Gov. Edwin W. Edwards died, his widow had him dug up from a Baton Rouge cemetery so she could have him cremated.

Echols said he began wondering if the iconic monument to a colorful but deeply controversial leader also was in danger. And then over the next few years, former Governors Buddy Roemer, Mike Foster, and Kathleen Blanco died. His thoughts evolved into a graveyard only available for the burial of Louisiana governors. If the Legislature established such a graveyard in law, then memorials to past and future governors, even the controversial ones, would be protected from shifts in the political winds.

“We’ll have a bill in the Spring,” Echols said. The next general legislative session begins March 14.

“It’ll be a legislative act to allow for the burial of governors, if the family so chooses, on grounds in front of the Capitol,” Echols said.

Exactly where in the Capitol Gardens a gubernatorial graveyard would be located remains to be determined. “Hopefully, in proximity to Huey Long,” Echols said, adding that he wants the help of the state divisions of archeology and historic preservation to make the choice.

The grounds in front of the State Capitol, facing downtown Baton Rouge, have a long history. Native Americans lived there. So did Zachary Taylor, the only U.S. president elected from Louisiana. A section was part of a U.S. Army post and the whole park was the original location of LSU.

Edwin Edwards, who died July 12, was buried with much pomp, including a horse-drawn cortege past Huey Long's grave, then through the streets of Baton Rouge, after laying in repose at the State Capitol. Trina Edwards, his surviving widow, said Edwin Edwards wanted to be buried near Huey Long in Capitol Garden. She recently had her husband’s remains exhumed and cremated. She hopes one day to inter his ashes at a place open to the public.

Because of Edwards' wishes, much attention focused on what permissions were needed; what procedures needed to be followed. But nobody knew.

House Speaker Clay Schexnayder, R-Gonzales, whose office was involved in the search, did not respond to a request for comment.

Edwin Edwards, Louisiana populist who served 4 terms as governor and 8 years in prison, dies at 93

Only nine laws refer to the State Capitol Complex, which is described by the streets that make up its border. The only mention of memorials allowed on the grounds of the complex was a recently erected “monument honoring the sacrifices of Louisiana Gold Star Families.” Established by a 2011 law, the superintendent of state buildings is charged with maintenance but can act only on the permission of the governor, the House speaker, and the Senate president.

But how did Huey’s remains end up in the Capitol Gardens?

It was the result of Senate Concurrent Resolution 4, according to the House and Senate Journals for the special session that began on Sept. 7, 1935. SCR4 was sponsored by state Sen. Coleman Lindsey, of Bossier and Webster parishes, and ordered a committee to find “a suitable location on the grounds of the new Capitol as the last resting place of our late beloved Senator, Honorable Huey P. Long.” Lindsey later served as lieutenant governor to Gov. Earl K. Long, Huey’s brother.

Huey Long, who was U.S. senator at the time, was shot on the night of Sept. 8, 1935, in the back hallway outside what is now the House Speaker’s office. Long was ambushed by Dr. Carl Weiss, the son-in-law of an Opelousas judge who opposed Long policies. The House had just approved a redistricting bill that gerrymandered the judge into a district where he was sure to lose reelection.

Long ran down the stairs and told reporters that he had been shot, then drove to Our Lady of Lake Hospital, which at the time was across the lake from the State Capitol, on the site where the First Circuit Court of Appeal and the Legislative Auditor now office. Emergency surgery failed to stop internal bleeding. He died at 4:10 a.m. on Sept. 10, about 31 hours after being shot.

SCR4 was introduced later in the day on Sept. 10 and passed on Sept. 11, 1935. Crews worked all night to ready the burial vault.

More than 200,000 people were estimated to have walked past Long’s body as it lay in repose in the State Capitol’s Memorial Hall and attended the burial on Sept. 12, 1935. The 12-foot-tall bronze statue, by Charles Keck, on top of the 18-foot-tall marble pillar was added in 1940 as was a spotlight that shines down from the top of the State Capitol onto Long’s grave about a half block away.