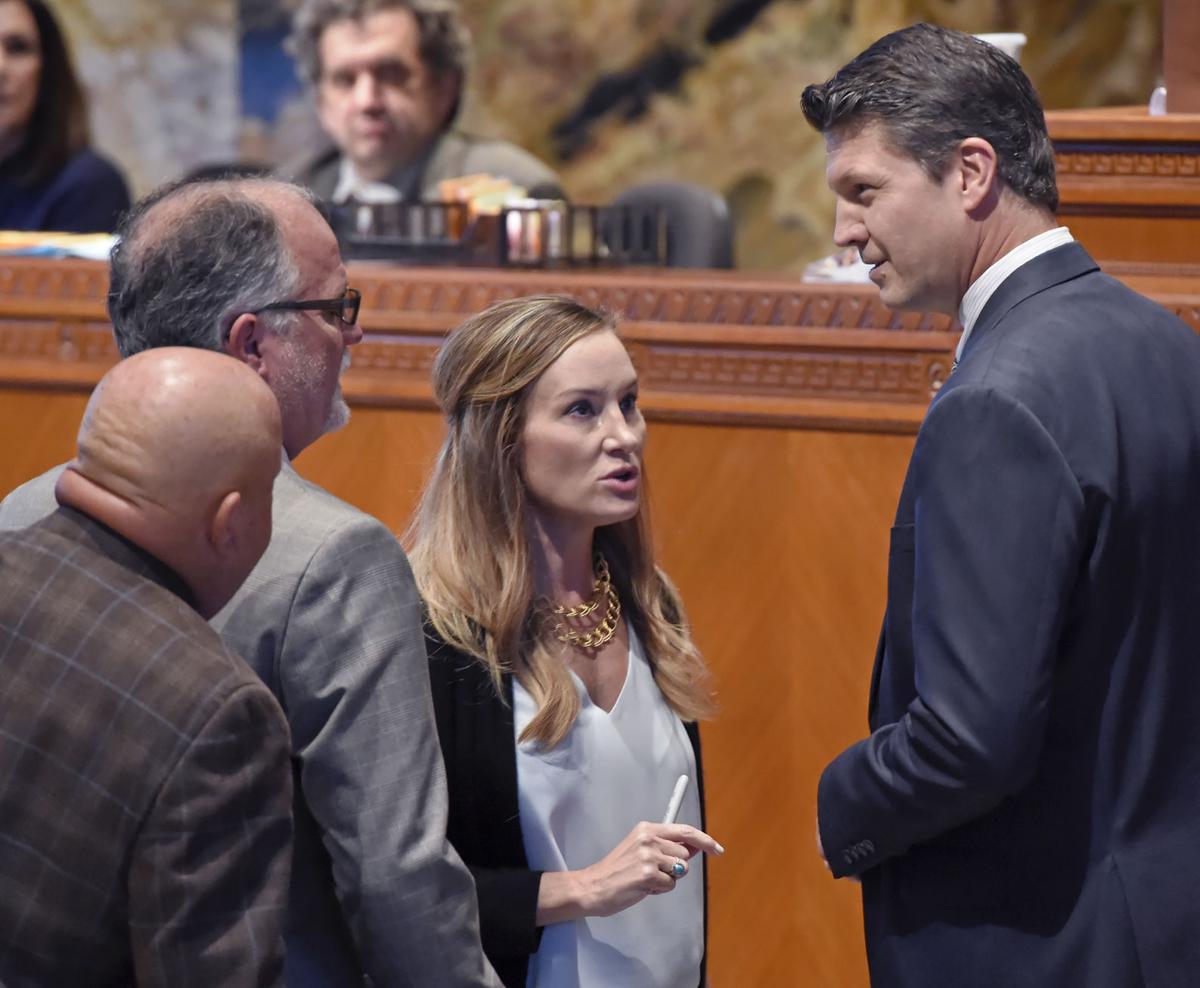 As Rep. James Armes III, D-Leesville, left, and Rep. Bob Hensgens, R-Abbeville, second from left, watch, Rep. Paula Davis, R-Baton Rouge, second from right, tells Rep. Raymond Crews, R-Bossier City, right, not to attempt adding his amendment to House Bill 10 for fear that it would scuttle a negotiated deal that ended months-long deadlock over how best to fund state government. Davis' HB10, which increased the state sales tax rate to 4.45 percent on the dollar, passed on a vote of 74-24 during House action Friday June 22, 2018. 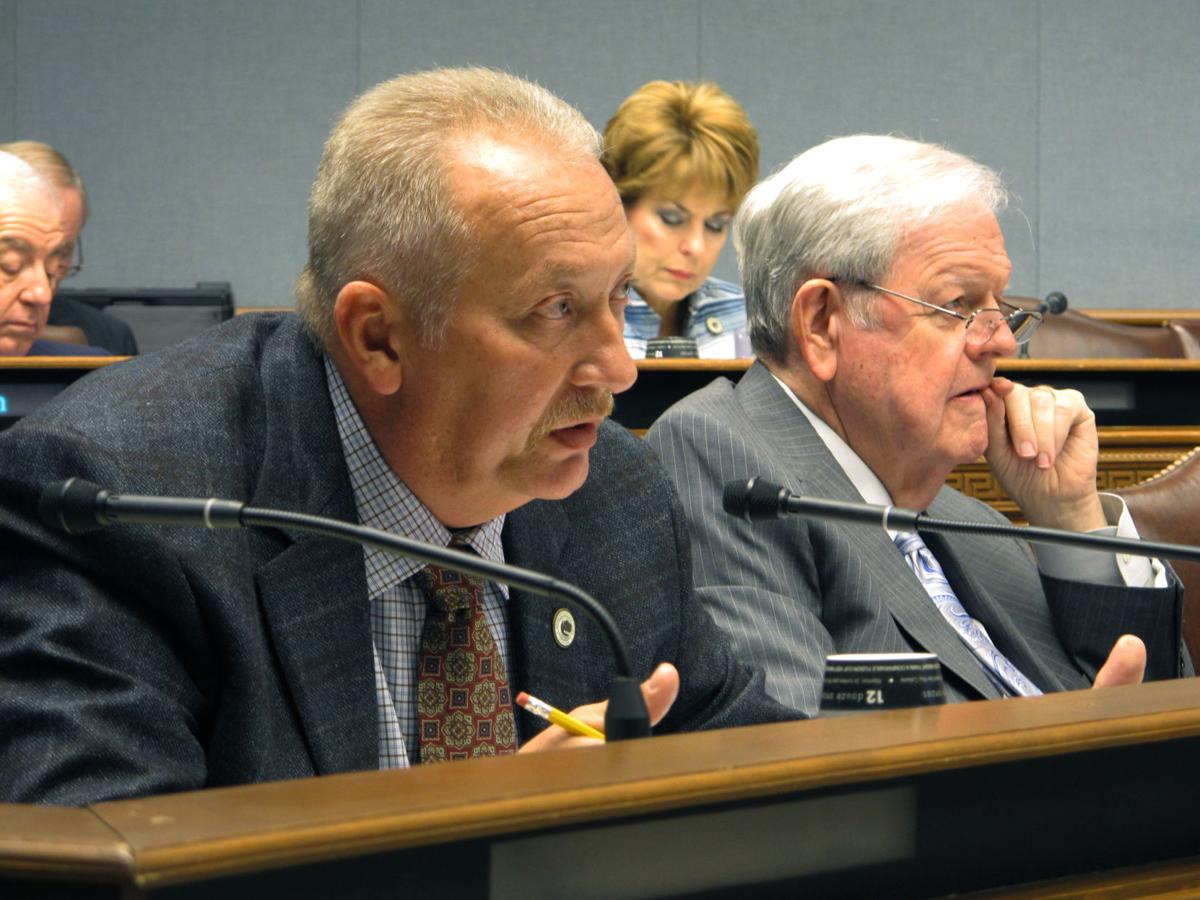 State Rep. Jack McFarland, R-Winnfield, tried to amend a sales tax renewal to give an exemption to the timber industry. He owns a timber company.

As Rep. James Armes III, D-Leesville, left, and Rep. Bob Hensgens, R-Abbeville, second from left, watch, Rep. Paula Davis, R-Baton Rouge, second from right, tells Rep. Raymond Crews, R-Bossier City, right, not to attempt adding his amendment to House Bill 10 for fear that it would scuttle a negotiated deal that ended months-long deadlock over how best to fund state government. Davis' HB10, which increased the state sales tax rate to 4.45 percent on the dollar, passed on a vote of 74-24 during House action Friday June 22, 2018.

State Rep. Jack McFarland, R-Winnfield, tried to amend a sales tax renewal to give an exemption to the timber industry. He owns a timber company.

Friday, Aug. 3, was supposed to be the start of a tax-free weekend for Louisiana consumers colloquially dubbed the “back-to-school” state sales tax holiday.

It won’t be happening.

In last month’s scurry to balance the state budget by continuing part of an expiring penny of the sales tax, legislators inadvertently discontinued for the next seven years the three state sales tax holidays, which were expected to cost the state about $5.2 million this year.

“It was a good two weeks before anyone realized it,” said Rep. Jack McFarland, R-Jonesboro, who was part of the team who went to the governor’s office to negotiate the last-minute deal that ended a yearslong impasse over the “fiscal cliff” by approving enough sales tax revenue to pay government bills.

“We thought the sales tax holidays were still in there,” McFarland said.

Though generally supportive of sales tax holidays, the goal of the legislators was to find a tax rate low enough to win Republican support but high enough to pay for the hospitals, colleges and other services that lawmakers didn’t want to cut dramatically.

Had he known that sales tax holidays were being suspended, McFarland said he still would have voted for Act 1, the new law that set the state sales tax at 4.45 percent of every dollar spent. Local governments add their own sales taxes to purchases.

Every exemption to paying state sales taxes — and Louisiana has more than 200 of them — requires a higher overall rate to raise the same amount of money for government services. Lawmakers jettisoned about half of those exemptions to reach the revenue goal.

Tax policy gurus like the Tax Foundation in Washington, D.C., and the Public Affairs Research Council of Louisiana in Baton Rouge argue these holidays haven’t been effective in spurring additional retail sales and divert attention from sweeping changes that would lower the overall tax rate, said Robert Scott of PAR.

After years of special sessions and temporary budget patches, the Louisiana Legislature appears to be on track to shore up the state's finance…

Since 2007, the holiday forgave most state sales taxes on the first $2,500 of a purchase price of specific items. Vehicles weren’t included.

Because the holiday fell right before school starts, a lot of those purchases were school supplies. The tax break doesn’t include local sales taxes, but local authorities can exempt their sales taxes too, if they want.

The Department of Revenue estimated the state would lose about $4.7 million from this weekend’s holiday.

Next on the schedule is the Second Amendment Sales Tax Holiday for Sept. 7, 8 and 9.

Since 2009, the holiday exempted both state and local sales taxes on consumer purchases of firearms, ammunition and hunting supplies. The state was expected to lose an estimated $404,000.

The third holiday is for hurricane supplies and takes place during the last weekend of May. The Disaster Preparedness Sales Tax Holiday, established in 2008, forgave most of the state sales taxes on supplies like batteries, cellphone chargers, storm shutters, blue ice, tarpaulin and other supplies.

This holiday cost the state an estimated $34,000. If the holiday would have taken place in May 2019, the state would have lost $68,000 in lost sales tax revenues. It won’t happen again, unless the law changes, until after July 2025.

“A lot of the motivations for the sales tax holidays, why they are passed, has less to do with saving consumers money and more about the political statements that are made,” PAR’s Scott said.

The Second Amendment holiday, for instance, allows legislators to voice support for guns during a time when the extent of gun regulation is being widely debated.

But, as a fisherman rather than a hunter, Scott notes that fishing poles don’t have a tax break, and that underscores a key problem with sales tax holidays as a matter of policy. Holidays arbitrarily discriminate against some products and favor others, he said.

The Tax Foundation points to research — the latest a 2017 study by the Federal Reserve — that shows consumers, at best, just shift the timing of their purchases. Overall retail sales do not increase, according to the tax policy think tank founded in 1937 by large corporate interests.

“Sales tax holidays do not promote economic growth or significantly increase consumer purchases,” which are the arguments for the holidays in the 17 states where they are held, the group stated in a report released earlier this month.

The holidays also go against conservative goals of setting the lowest possible tax rates more evenly distributed, said state Rep. Paula Davis. But that was not why sales tax holidays were suspended in Act 1 of the third special session, the Baton Rouge Republican said.

It was happenstance, not design.

“It wasn’t anything that anybody discussed,” said Davis, who was the chief sponsor of Act 1, the compromise that solved state government’s near-annual fiscal cliff problem.

In a third session specially called to deal with the issue, legislators had stalled over how much of the fifth sales tax penny, set to expire July 1, to keep.

If the penny expired, state government wouldn’t have enough revenues to pay the bills without having to make draconian cuts.

Republican House members initially agreed to keep one-third of the expiring penny, but later offered to retain 40 percent. Democrats, Gov. John Bel Edwards and a majority of the state Senate resolved to keep 50 percent or a half of the fifth penny — a difference of about $86 million.

With less than week, a weary House Speaker Taylor Barras, R-New Iberia, acknowledged “we are at an extreme deadlock.”

Davis and her allies fashioned a 4.5 percent solution that split the difference between the two entrenched sides.

Anatomy of a legislative deal: How Louisiana lawmakers arrived at final 'compromise'

Faced with the potential of yet another frustrating legislative meltdown, the leaders of the Democratic and Republican factions in the Louisia…

She asked House Fiscal Division staff to draft legislation that was like a measure sponsored by House Majority Leader Lance Harris, R-Alexandria, which had passed the House during the second special session but died because of changes made in the Senate.

Of the 204 instances where sales taxes don’t have to be paid, Harris’ House Bill 27 included 110 of those exemptions. The remaining breaks, including sales tax holidays, were left off the list and would no longer be honored.

That list, with a few updates, was copied into Davis’ bill almost word for word. Her measure eventually passed with a vote of 74-24 and was signed into law on June 24.

The only time sales tax holidays were mentioned publicly was during the May 25 debate of Harris’ bill on the House floor. The majority leader was batting away a half dozen or so attempts to add the excluded exemptions to the list.

State Rep. Stephen Dwight, R-Lake Charles, tried to reinsert the sales tax holidays on the list of acceptable exemptions. Harris objected, saying “We’re going eat this thing up,” meaning that adding more exemptions would chip away at the amount of revenues that could be raised.

The House refused to return the sales tax holidays on a vote of 43-56.

Louisiana Spotlight: Louisiana tax deal was about politics, not policy

Maybe it was Louisiana lawmakers' exhaustion after four legislative sessions this year. Maybe everyone was so ready to go home they caved and …

“Some of my colleagues who are complaining about this on Twitter voted against it on the Harris bill,” Davis said, adding that none of her constituents has called to complain.

Nevertheless, Davis predicts that one of her colleagues will try to reinstate the sales tax holidays when the Legislature convenes again April 8, 2019.

Grace Notes: Lawmakers canceled sales tax holiday without even noticing, but they should bring it back

Lawmakers spent hours upon hours fighting over whether Louisianans should pay four cents or five cents per dollar spent in sales tax, or 4.33 …