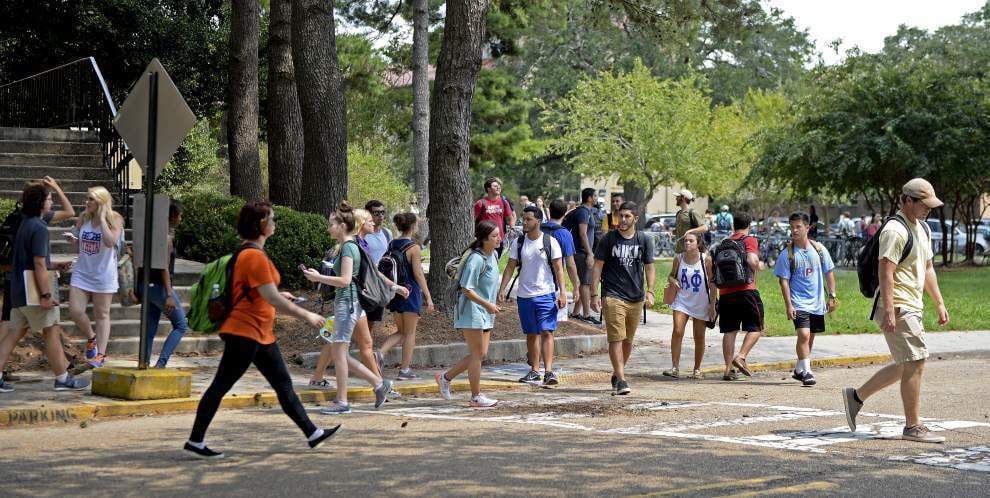 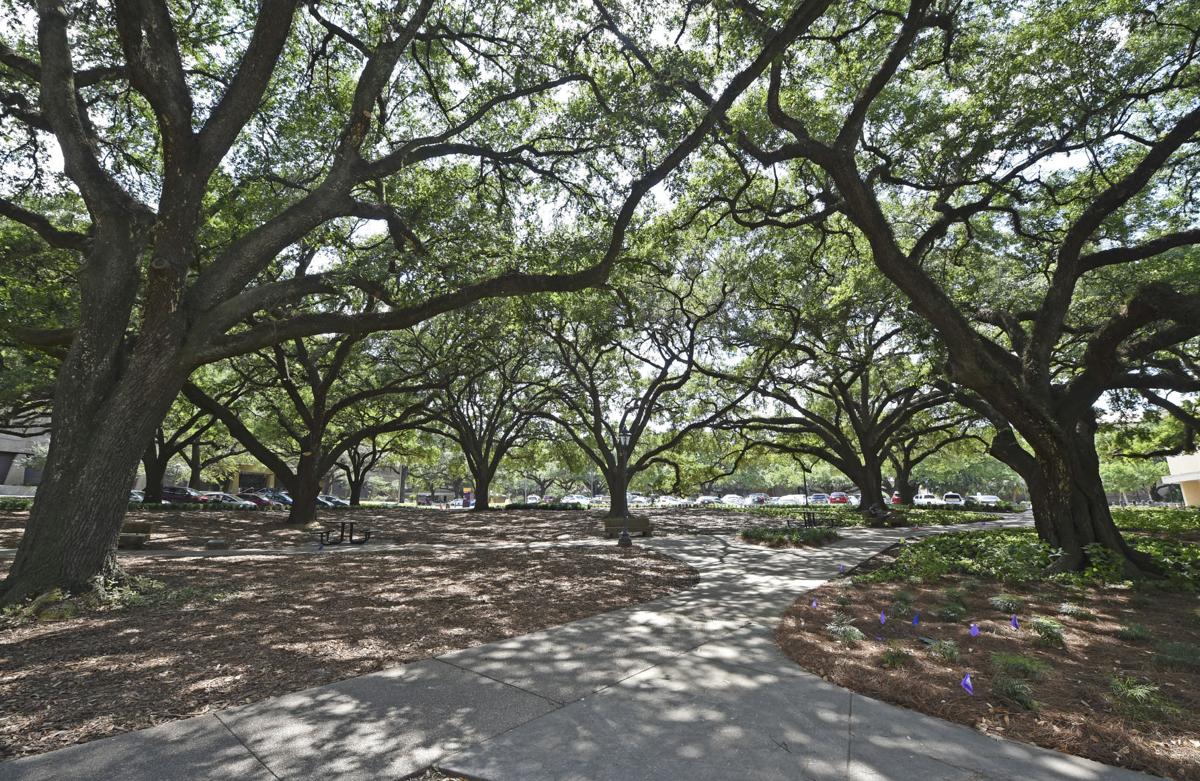 The Memorial Oak Grove, which honors 30 LSU students and alumni who died in World War I, Friday, May 11, 2018, behind the Student Union on LSU's campus in Baton Rouge, La.

The Memorial Oak Grove, which honors 30 LSU students and alumni who died in World War I, Friday, May 11, 2018, behind the Student Union on LSU's campus in Baton Rouge, La.

Back when she was a stellar high school senior looking at colleges, Rachel Campbell’s parents in Mandeville urged her to go to Alabama.

The deal offered by the University of Alabama was sweet: a full ride including room and board, plus opportunities to study abroad.

A 'sad night' in La.: After special session collapse, what comes next for TOPS, higher ed, more?

Third time's a charm? Gov. John Bel Edwards is certainly hoping that's the case after two special sessions in the past four months have collap…

Campbell, though, was a fan of LSU’s political communications program, and she prevailed because TOPS made that preference financially feasible. The Taylor Opportunity Program for Students pays most tuition and costs for about 52,000 students who have achieved modest academic goals. Louisiana is spending about $292 million for TOPS this year, which includes tuition coverage and, in some cases, stipends for high-achieving students.

That decision to stay in Louisiana didn’t look as good in 2017 when that year’s state fiscal crisis led legislators to consider taking money from the politically popular program to help balance the budget.

But when all was said and done, legislators in June 2017, cut TOPS leaving students about 60 days to come up with an extra $3,000 or so to pay for school. Campbell was able to get a campus job and got a little help from her parents.

Now for the second time in three years, the funding for TOPS has been cut.

“If I was a high school senior again this year, I think I would be looking out of state,” Campbell said.

The state budget for the fiscal year that begins in less than three weeks on July 1 funds the grant program at only 70 percent. In that same budget, higher education institutions lost 25 percent of their annual appropriations.

It's official: Legislature's 3rd special session of 2018 to start June 18

Lawmakers are returning June 18 to Baton Rouge for the third time this year to try to overcome their philosophical differences on how to balance state spending with the revenues available — perhaps raise taxes enough to fully fund TOPS.

Higher education leaders have pleaded with the legislature to stabilize funding for TOPS and higher education earlier in the year. Come late June, most students already have decided where they’re going to college and, particularly with high-achieving students, they are weighing lucrative offers from other states against a program that may or may not get fully funded each year.

LSU President F. King Alexander said the uncertainty is creating “question marks in parents’ and students’ minds” about whether TOPS will be a sustainable program.

Recipients of TOPS Opportunity aid, the program most students qualify for, got $7,462, which means they would have to come up with about $2,200 if the grant was capped at 70 percent.

If lawmakers can’t agree on raising enough revenues to pay for TOPS, LSU will be unable to help offset the difference with part-time jobs, additional scholarships and the like, Alexander said.

Gov. John Bel Edwards and his political allies face an uphill battle in gathering the additional votes needed to pass a major tax bill in the …

Legislative cuts have put appropriations for higher education budgets around $600 million to the state’s 14 public universities, 15 community colleges and seven specialized units. But that’s down from about $1.4 billion in 2008.

Serial cuts — 17 over the past 10 budgets — have left higher education students in Louisiana as the lowest funded students in the South, said Jim Henderson, head of the University of Louisiana System, where most of the state’s students go to college.

The promise of an inexpensive college education because of TOPS helped recruit students.

“It helps us redeem some of that competitive advantage we have lost to out-of-state institutions,” Henderson said. “We’ve been able to compete for students, especially the best and brightest students, with TOPS because TOPS is one of the most generous merit-based scholarships in the country.”

In addition to reneging on that promise, reducing TOPS funding puts a burden on students.

Henderson says that would end up costing students about $1,600 more per year to attend a University of Louisiana school, which he says is "an insurmountable hurdle for many of them."

In 2017, when Henderson was president of Northwestern State University, he helped students cover the gap by postponing infrastructure construction. That option isn’t available this year, he said.

“We’ve always trailed the nation in educational attainment,” Henderson said. “We’ve got to find more ways to bring more students into colleges and universities so that they can compete in the 21st-century economy.”

“I really don’t know what I would do,” said Richard Davis Jr., a Southeastern Louisiana University student who well remembers the last-minute scramble to find a scholarship and put together enough money to cover the remaining 30 percent of his college costs after legislators abruptly cut TOPS.

This time, Davis said he is looking for a second job, despite his heavy course load.

“It becomes attractive to look at University of Alabama, which is not that far away, to get a full ride,” said James Caillier, the executive director of the Patrick F. Taylor Foundation, the oilman for whom the program was named. “But if they knew they had TOPS early, that’s enough to keep them in Louisiana.”

Lance Chaisson, who graduated from Catholic High School in Baton Rouge in 2017, was set to pursue LSU up until his junior year of high school — but University of Alabama had more to offer him.

“LSU should take a look [at] Alabama,” said Lance’s mother, April Chaisson. “What they’re doing to get kids over there — it’s so surprising.”

This current school year was the first time in a decade that higher education or TOPS wasn’t cut. And higher education leaders say just giving schools one year without cuts yielded tangible benefits that are all at risk of being undone again.

“The shining hope in all this is that our recruiting efforts this year have just dwarfed everyone else in the SEC,” Alexander said.

Additionally, of that increase, LSU is up by 27 percent of students who come to LSU from Alabama.

Alexander said the recent success comes from the ability to offer students scholarships and focus on recruitment.

Alexander also said the year of stability resulted in LSU’s largest faculty retention since he became president in 2013, the second-largest graduating class in May 2018 and the largest incoming freshman class for fall 2018.

“Hold us whole, let us do our jobs,” he said as a message to legislators, “and you’ll see some outstanding numbers.”

Henderson also cited the highest enrollment UL schools have seen in the past five years because of the year of stable funding.

Some state leaders, however, argue concerns for TOPS are premature, and it will be fully funded — or close to it — when the next special session wraps up.

Sen. Conrad Appel, R-Metairie, a member of the Senate Education Committee and former chairman of the panel, said TOPS is a key priority for Republicans, who control the House and Senate.

“Louisiana should make a commitment up front that the money will be available,” Caillier said. “We don’t need anymore broken promises. We have too many broken promises in Louisiana, especially to our young people.”