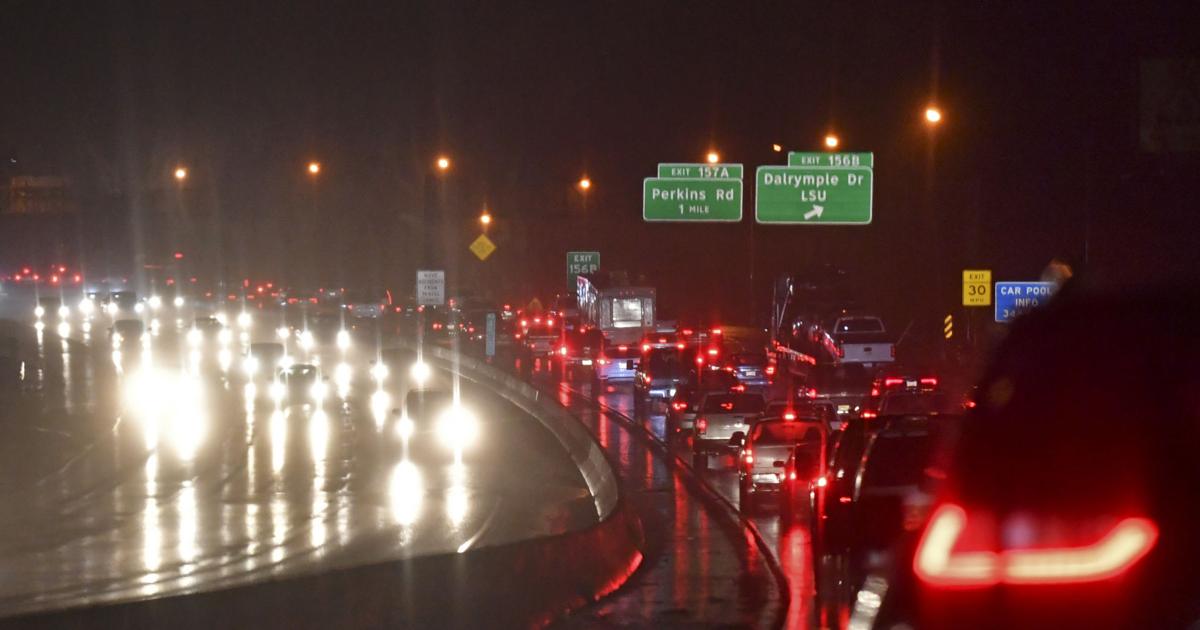 Traffic slows to a standstill on eastbound Interstate 10 due to a wreck at the College Drive exit as rain falls Tuesday evening, October 29, 2019, in downtown Baton Rouge, La. 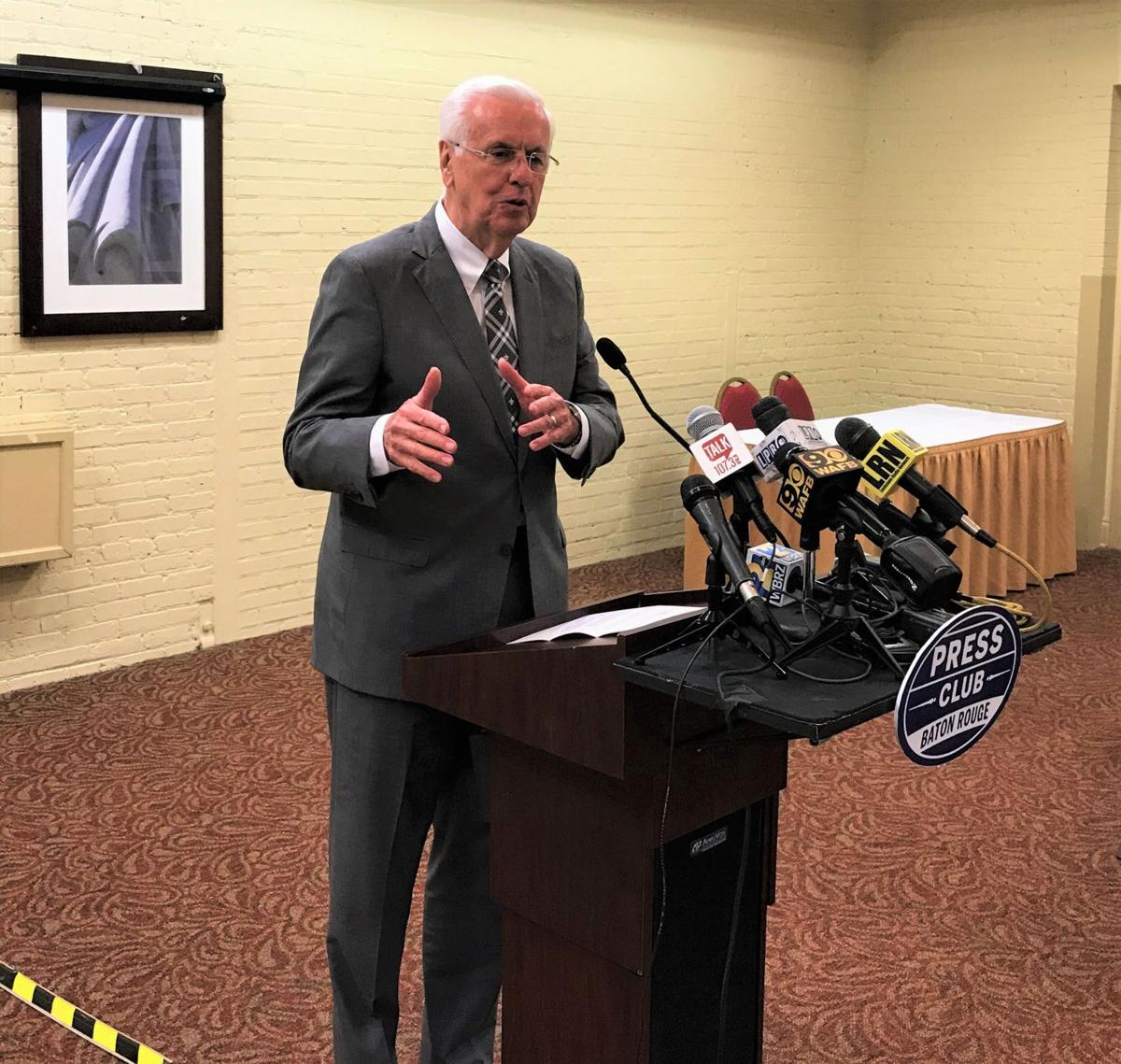 Insurance Commissioner Jim Donelon told the Press Club of Baton Rouge, Feb. 17, that he would back what he calls "tort reform" legislation this year.

Traffic slows to a standstill on eastbound Interstate 10 due to a wreck at the College Drive exit as rain falls Tuesday evening, October 29, 2019, in downtown Baton Rouge, La.

Insurance Commissioner Jim Donelon told the Press Club of Baton Rouge, Feb. 17, that he would back what he calls "tort reform" legislation this year.

Louisiana Insurance Commissioner Jim Donelon said Monday auto insurers charge widows more not because their husbands died, but because they are single. And he’s okay with that.

“Because you are single. It is not because you are widowed,” Donelon told a reporter, Sue Lincoln, whose husband recently died and asked about an increase in her personal insurance rates.

“The truth is that single women pay higher premiums than married women because of actuarial data that’s used in every of the 50 states. It doesn’t matter if you’re a teenager, a single woman or if you’re a widow or if you’re a divorcee,” he added. "I don't know if that is true on the male side."

Donelon was speaking in favor of a package of "tort reform" bills that would limit the filing, handling and recovery of bodily injury lawsuits in state courts as a way to lower auto insurance premiums in a state that has the second highest average rates in the country.

Single women pay higher premiums for their auto insurance than married women because insurance company actuaries have concluded that they represent a greater risk behind the wheel, he told the Press Club of Baton Rouge.

“Do I think there should be difference? I do. I think the actuarial cost ought to drive who pays what, not what their gender is, ” Donelon said, dismissing the notion that insurance companies charge a “widow’s penalty,” a belief that has become so widespread that legislation has been filed to restrict using a change in marital status when calculating the price of auto insurance.

“It’s a sad commentary that the insurance commissioner is okay with gender bias in setting insurance rates,” said state Sen. Jay Luneau, the Alexandria Democrat who filed Senate Bill 15, which would forbid insurance companies from raising rates because the customer lost their spouse.

“Years of a good driving record ought to account for something and insurance companies shouldn’t be able to raise the rates just because your husband or wife died,” Luneau added in an interview later Monday afternoon. He also has prefiled bills that address other factors insurance companies use in calculating rates, such as age, credit rating, and deployment status for active military.

With the exception of charging deployed military more, which Donelon says should be changed, the commissioner opposes Luneau’s bills.

Gov. John Bel Edwards, however, has spoken in favor of Luneau's legislation.

“We shouldn't lose sight of the fact that our insurers are charging people more for auto liability insurance because they are poor, because they are widows, because they are blue-collar,” Edwards told reporters recently after speaking at an event hosted by the Louisiana Association of Business and Industry, which is pushing hard for tort reform this year.

“The commissioner can do a lot more to address these things. And now that it's public knowledge, how these insurers are taking into account these extraneous factors to charge people more, it would be my hope and expectation that he will more aggressively will move to combat this on the regulatory front as we together pursue a potential legislative actions that could also help,” Edwards said.

In fight over car insurance rates, Republicans hope to reach a deal with John Bel Edwards

Insurance actuaries set the prices of policies by calculating expected future losses based on historical data of past losses. The rates need to cover losses and expenses plus earn a profit. The National Highway Safety Administration notes that men cause more accidents than women, 6.1 million to 4.4 million accidents per year. But men drive about 30% more miles than women. When insurance companies put pencil to paper, they concluded that, statistically at least, women are more likely to have accidents than men and that single people are more likely to get into a wreck than married people.

In a 2015 study, the California-based Consumer Federation of America argued a change in marital status from married to unmarried can cause a woman’s auto insurance premiums to rise as much as 226%, which the group called a “widow’s penalty”.

Donelon dismissed the Consumer Federation as demagogues and suggested their study was funded by the lawyers who represent accident victims.

“The question is what is the justification for the so-called ‘widow’s penalty’ that was written up by this Consumer Federation of America funded by the trial bar organization. And the answer is there is no such penalty,” Donelon said.

During his reelection campaign last fall, however, Donelon supported the abolition of the so-called widow penalty.

“Absolutely, I'd be happy to support it. Know that it's not being utilized in Louisiana by any companies today,” Donelon told the Press Club on Sept. 16, 2019. “It had been for a while, for a short period of time a couple years ago. We got a consumer complaint and addressed it with the company who voluntarily backed off on utilizing it. But yes, that's probably a good suggestion just in case someone would want to go there in the future."

Who's drilling where in Louisiana? Here are the well permits filed for Feb. 8-15

Waitr to lay off all 2,300 Louisiana drivers in these 5 markets; some to become contractors

Waitr will lay off 2,300 Louisiana employees in April as the restaurant delivery company transitions drivers from hourly employees to independ…

Plan to bring Aldi to Lafayette gets preliminary OK; residents speak out against road extension

The lone survivor of the Dec. 28 plane crash in Lafayette has been discharged from the hospital to continue recovering at home.

Gov. John Bel Edwards barely won re-election last year. He has to contend with a larger Republican majority now than he did in his first term,…