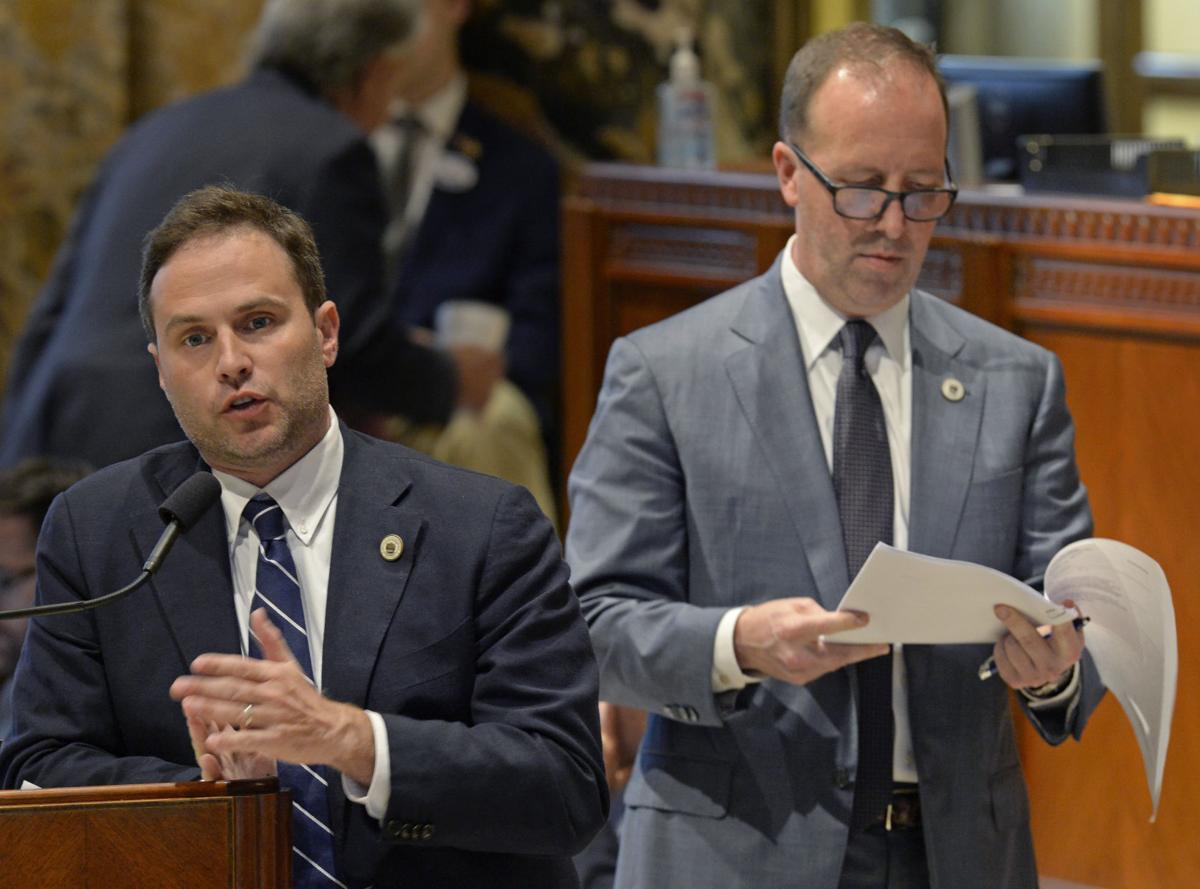 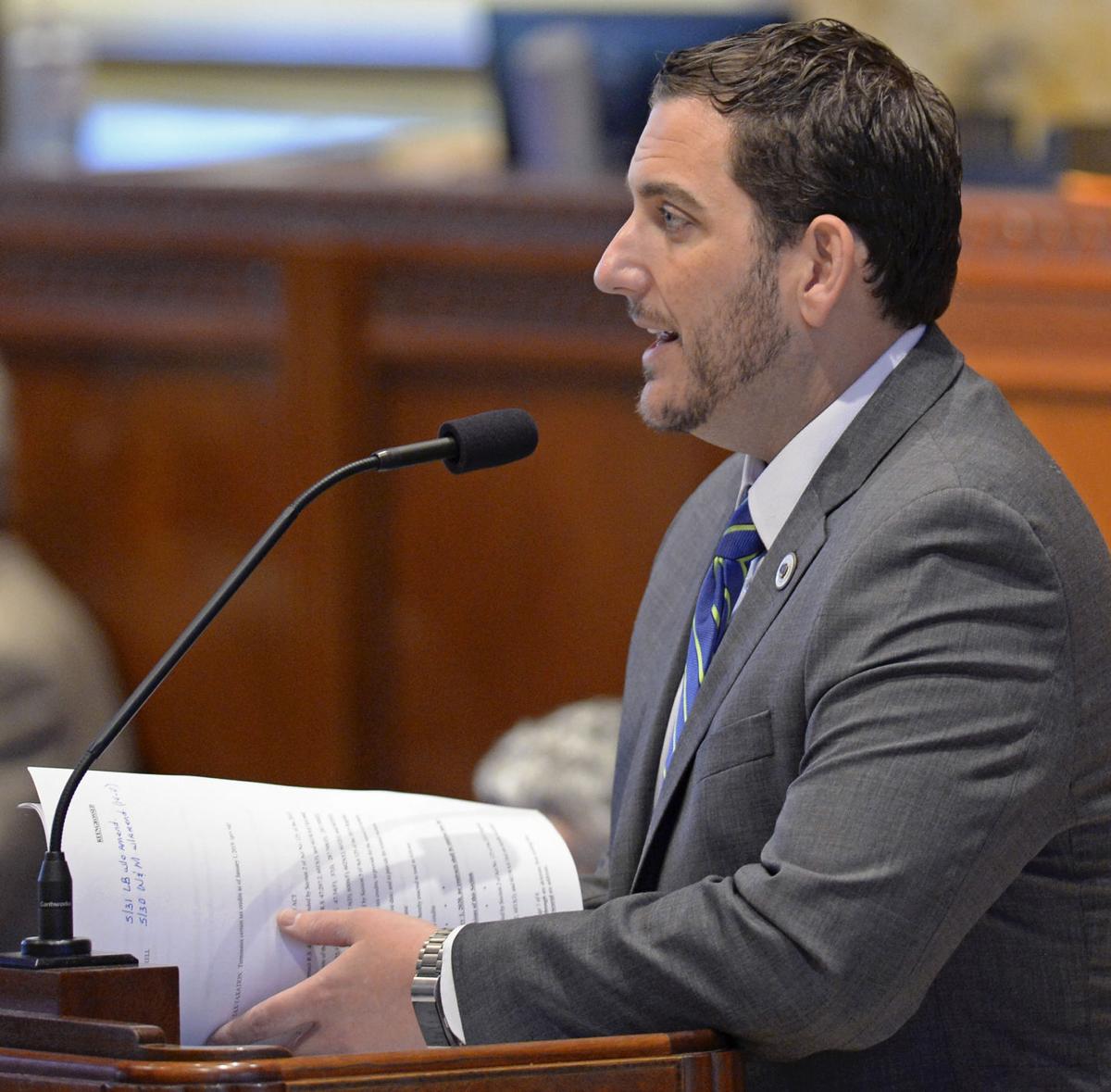 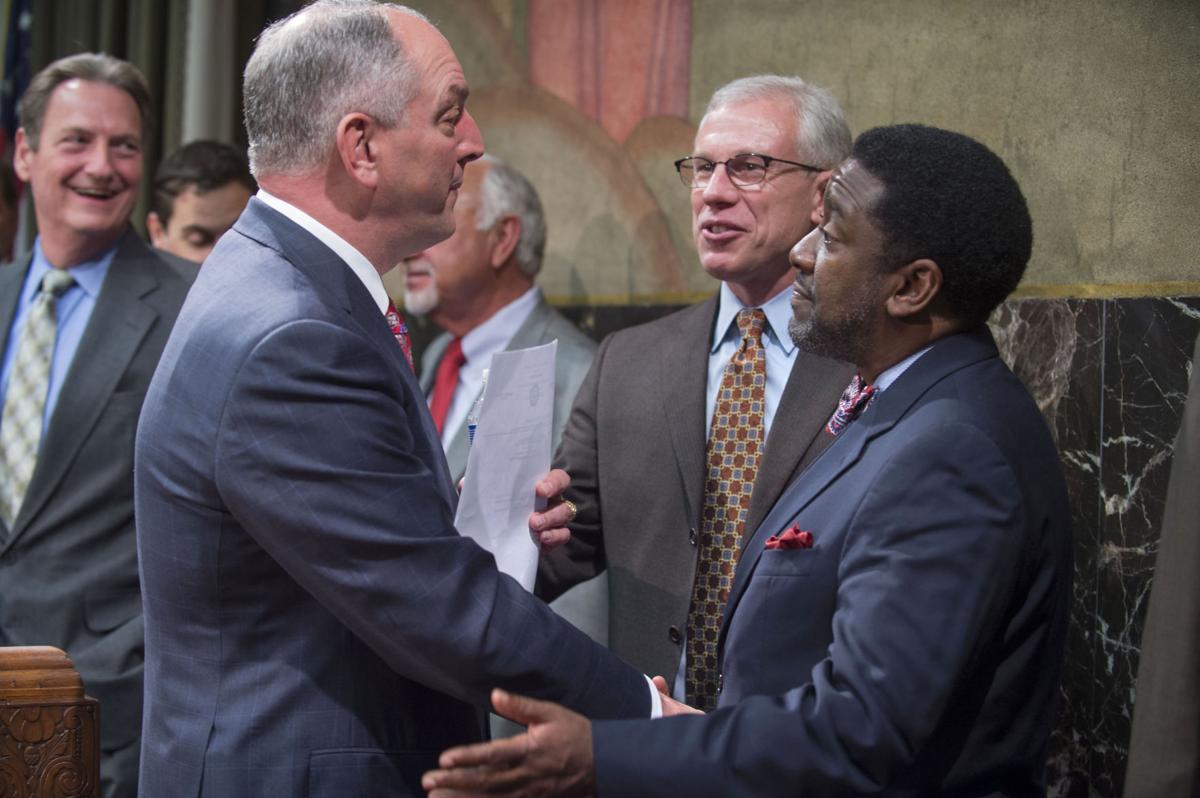 Gov. John Bel Edwards, left, shakes hands with his designee on the Louisiana Justice Reinvestment Task Force, Flozell Daniels, Jr., right, President and CEO of Foundation For Louisiana, Thursday, March 16, 2017, during a press conference following a meeting in which the task force detailed its plan for criminal justice reform. The Rev. Gene Mills, President of Louisiana Family Forum, is at center, and Lafourche Parish Sheriff Craig Webre is at left, background.

Gov. John Bel Edwards, left, shakes hands with his designee on the Louisiana Justice Reinvestment Task Force, Flozell Daniels, Jr., right, President and CEO of Foundation For Louisiana, Thursday, March 16, 2017, during a press conference following a meeting in which the task force detailed its plan for criminal justice reform. The Rev. Gene Mills, President of Louisiana Family Forum, is at center, and Lafourche Parish Sheriff Craig Webre is at left, background.

All 10 bills of a dramatic overhaul of Louisiana's criminal justice system have passed both chambers of the Legislature, and are within reach of the governor's desk for final approval.

It's a victory for advocates pursuing the ambitious revamp that will, in large part, lead to some lighter jail sentences. It's also somewhat unexpected for the bipartisan consensus on the issue in such a deeply conservative state where law enforcement and elected officials have long prided themselves for being tough on crime.

But being tough on crime has led to laws that have overtime lengthened sentences and removed parole opportunities for offenders, earning Louisiana the unwanted distinction of being the most highly incarcerated place in the world.

Some of the measures still await approval of amendments tacked on through the process, but legislators and Gov. John Bel Edwards celebrated Monday evening after the final group of bills passed the House chamber.

"Today's progress on the criminal justice reform package coming out of both chambers demonstrates that we can find bipartisanship and collaboration among our elected leaders in Louisiana on tough initiatives that prioritize the best interests of our people," Edwards said in a statement. "I am proud of the Legislature's work on these historic bills and look forward to signing them into law when they make it to my desk."

When running for office, Edwards promised to reduce the prison population. He endorsed all 10 bills in a "criminal reform package," sponsored by lawmakers on both sides of the aisle and in both chambers of the Legislature.

"For too long, Louisiana has had the highest incarceration rate in the nation," Edwards said. "We will begin to reverse that trend very soon."

In total, the Pew Charitable Trust has estimated the implementation of the bills will reduce the state's prison population by 10 percent over the next decade. The savings the state will generate for no longer housing those inmates is projected to be $262 million, of which 70 percent has been obligated for programs to rehabilitate offenders and support victims.

Most significantly, the package of bills aims to overhaul sentencing in the state criminal codes. The package will reduce mandatory minimums, trim sentences and give some inmates access to parole eligibility sooner. It creates a medical furlough program, which allows the sickest inmates to temporarily receive treatment off site, and be eligible for Medicaid, which saves the state on medical costs. The package overhauls drug sentencing, allowing lighter sentences based on weights, and streamlines the state's many incongruous theft penalties. One bill in the package will limit how often juvenile offenders can receive life without parole sentences.

The measure also expands prison alternatives, like drug court, and expand safety nets for people getting out of jail and returning to their communities, by reducing their financial burdens and helping them have better access to jobs. Another bill will help improve the way victims are notified when offenders have parole hearings or are released.

"This is bold. This is big. And this is reform," said Rep. Tanner Magee, R-Houma, as he presented the final legislation to the House floor.

Democrats and Republicans in the Legislature, who could agree on little this session when it came to dealing with the state's prolonged budget problems, found consensus on the complex package that typically would have been considered politically unpopular.

Conservative lawmakers, who tend to favor tougher criminal sentencing, could take some comfort in approving the controversial bills because they had the blessing of influential groups like the state District Attorneys, Sheriff's Association, the Louisiana Family Forum and the Louisiana Association of Businesses.

"It sounds like miracles have happened and people are agreeing on these," said Central Rep. Barry Ivey, a Republican who voted in favor of the measures.

To be sure, that consensus was born out of many hours of negotiations and compromise. When the bills were originally unveiled, they included more changes to sentences impacting violent offenders, which were removed after state prosecutors threatened to oppose the bills. A major element left on the cutting room floor was a proposed felony class system, which would have reclassified hundreds of felonies into an A-F system, clearly outlining sentences. That measure was kicked to next year, after the district attorneys' group requested further study.

Despite the high profile endorsements, there were still some strong objections from House lawmakers who took issue with a couple provisions that will relax penalties for violent offenders.

A first time violent offender, who is not a sex offender, could receive parole eligibility after serving 65 percent of his or her sentence under the changes. Currently law requires them to serve 75 percent of the sentence. Another measure would restore parole eligibility to 130 second-degree offenders who were sentenced to prison in the 1970s. When those offenders were originally sentenced they were given parole opportunities, but it was subsequently taken away from them by the Legislature.

"We have the highest murder rate of any state in the country, and it's not even close," Bacala said. Louisiana does in fact have the highest murder rate in the nation and has for 27 straight years, according to New Orleans crime analyst Jeff Asher. In 2015, Louisiana had more than 10 murders per 100,000 people, which is twice the national average.

But in an interview, Martiny said he was disappointed in the characterization by Bacala. He said the bills overwhelmingly impact nonviolent criminals.

He also questioned whether Louisiana's current policies breed more dangerous criminals by putting nonviolent offenders in jail for so long without opportunities to rehabilitate them.

Martiny, who handled the more controversial bills on the Senate side, said this package has been the most important thing he's done in his 23 years in the Legislature. He said the package is both fiscally responsible and good policy.

"It's always easy to create a crime, to enhance penalties, to take away good time, no one ever criticizes you for that," Martiny said. "But we over incarcerate nonviolent people. As a result we don't have the funds to deal with these people when they're in jail and they come out more dangerous than when they came in."

Our Views: At last, a real shot at prison reform

In the final week of a frustrating and largely fruitless legislative session, lawmakers adopted a symbolic resolution to “affirm the need for …

Lawmakers find compromise on sentencing juveniles to life without parole

Lawmakers have reached a compromise, that neither side is fully happy with, on a contentious bill that will curb life without parole sentences…

After two years of haggling, lawmakers have finally passed a bill to change rules for sentencing juveniles to life without parole.

Corey Ladd, man sentenced to 17 years for marijuana possession, to be freed

Corey Ladd’s 5-year-old daughter held her composure through hours of his hearing in state court on Friday. But the moment a judge said he woul…

Traditionally, it's been Louisiana's Democrats and liberal social justice advocates who have pushed for reforms in the state's criminal justic…

For a growing share of Louisiana's inmates, only chance for release rests with the governor — or the grave

Gov. Edwards signs criminal justice overhaul into law, in what some laud as historic achievement

With many supporters calling it an "historic achievement" for Louisiana, Gov. John Bel Edwards signed 10 bills into law overhauling the state'…

The New York Times editorial board recently praised a package of criminal justice bills passed in Louisiana, lauding it as one of the “most am…

Local law enforcement officials are bracing for the release of the first group of inmates – about 1,400 convicts – under the new criminal just…

Almost 2,000 prisoners walked away from Louisiana prisons, jails and parole offices Wednesday, the first to benefit from a new law to shrink t…