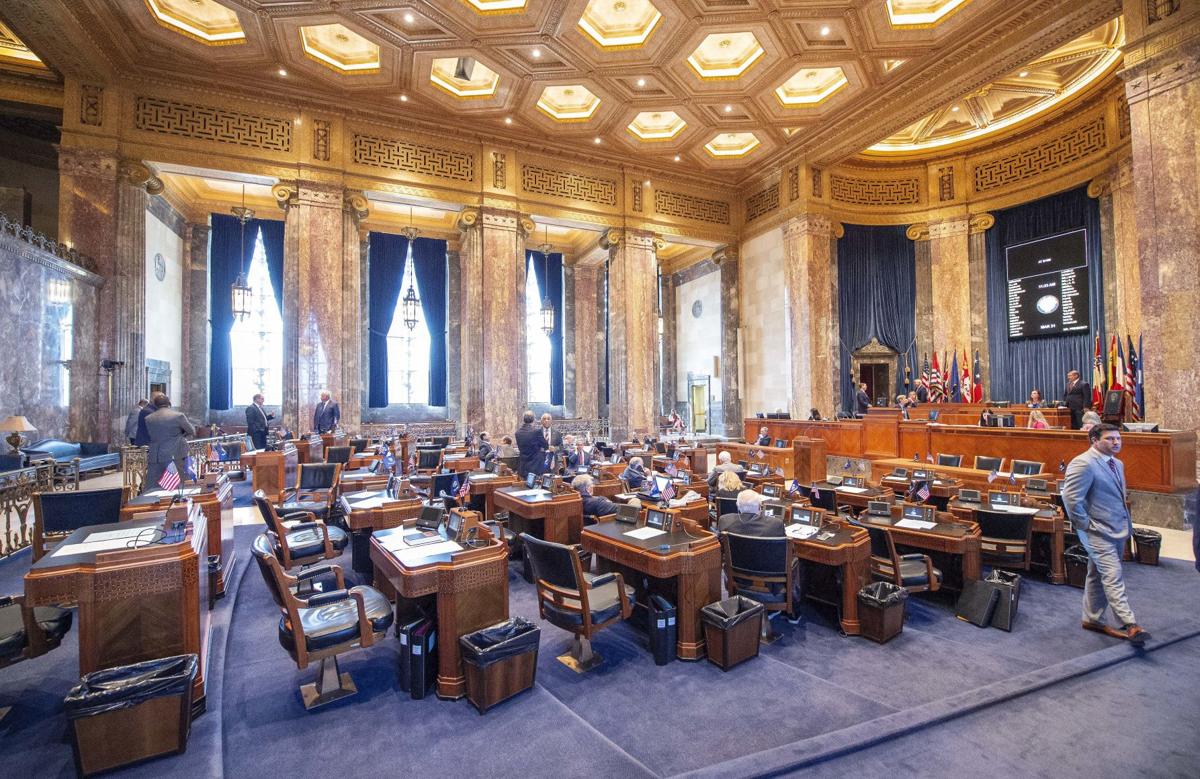 The Senate chamber as the Louisiana Legislature convened at 11 am for a short time to move bills on legal calendar and to introduce contingency measures for budget and capital outlay Tuesday March 31, 2020, in Baton Rouge, La. Everyone was sitting with a space between them and keeping the social distance guidelines. 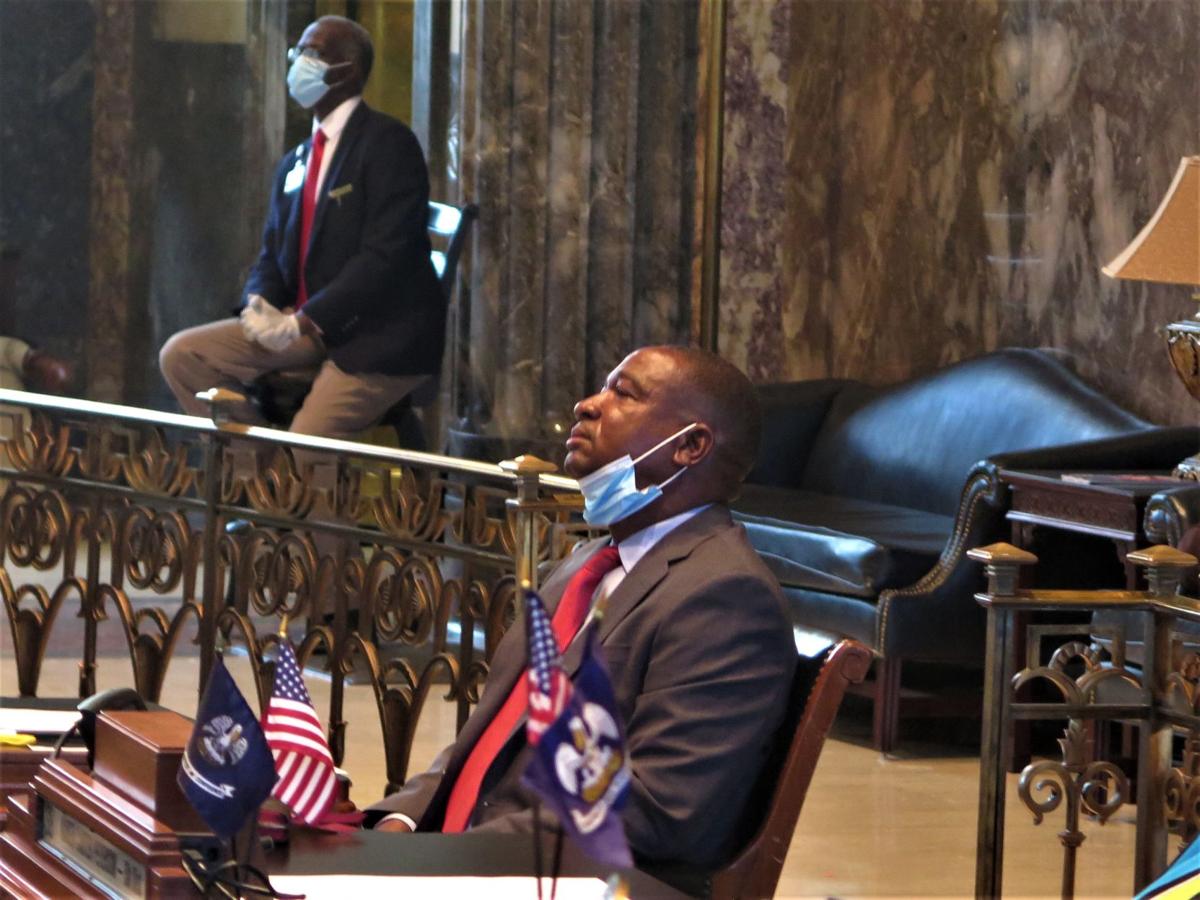 State Sen. Cleo Fields, D-Baton Rouge, watches the vote on his resolution to authorize hearings on police practices during a rare Sunday night session on June 14, 2020.

The Senate chamber as the Louisiana Legislature convened at 11 am for a short time to move bills on legal calendar and to introduce contingency measures for budget and capital outlay Tuesday March 31, 2020, in Baton Rouge, La. Everyone was sitting with a space between them and keeping the social distance guidelines.

State Sen. Cleo Fields, D-Baton Rouge, watches the vote on his resolution to authorize hearings on police practices during a rare Sunday night session on June 14, 2020.

In a rare Sunday evening session, the state Senate easily approved a proposal that would authorize hearings on police practices after the death of George Floyd.

The vote was 34-0, sending the plan to the House for more debate.

The Senate, in a 45-minute session, also approved a bill by Sen. Beth Mizell, R-Franklinton, aimed at extending internet access to rural areas.

Both topics were on the agenda as lawmakers began the final weeks of the special session, which has to end by June 30 at 6 p.m.

Approval of an operating budget by July 1 is the key priority, as well as renewed debate Monday on efforts to reduce car and truck insurance rates.

Louisiana police reform would include psych analysis, ban on choke-holds and more

It would set up a task force of state lawmakers, law enforcement, academic leaders and others to review a wide range of topics, including training, screening, "racial bias recognition," misconduct and "eliminating bad actors."

The study was sparked by the death of Floyd, a 46-year-old black man who died May 25 in Minneapolis after a white police officer held him on the ground, with his knee on his neck, for nearly nine minutes.

Fields' proposal says Floyd's death "has focused public discourse on the causes of police brutality and the use of excessive force, especially when used against people of color."

The senator told colleagues Sunday he has never been prouder as a senator than he was last week when every member of the committee that heard his bill signed on as co-authors. "And it sends a message to the rest of the state that this Senate cares and wants to do what is right," he said.

The panel is supposed to holds its first gathering by Aug. 15 and make its recommendations to the Legislature by Feb. 1 in time to debate separate legislation by Fields that would ban the use of choke-holds by police, require officers to undergo psychological analysis and require that officers step in when their colleagues are breaking the rules.

Fields said he will push the issue in the fall if, as expected, the Legislature holds a second special session to tackle budget and other issues sparked by the coronavirus pandemic.

The only change Sunday was to expand what was a 14-member task force to include students and others.

The proposal breezed through the Senate panel last week.

However, a similar bill in the House by Rep. Ted James, D-Baton Rouge, won committee approval there only after controversy and the removal of references to Floyd in that resolution.

When James' proposal will be debated in the House is unclear.

The Senate then approved legislation on a 34-0 vote that would set up a framework for companies to provide high speed internet to rural parts of the state. Senate Bill 10 of the special session, by Mizel, Senate president pro tempore, now heads to the Louisiana House for consideration.

The broadband issue took on added importance when public schools were forced to rely on distance learning after classrooms were closed in mid-March, leaving lots of students unable to keep up with their peers because of internet and other shortcomings.

Gov. John Bel Edwards had vetoed Mizell’s legislation that passed without a single no vote during the regular session at the end of May. The rural electric cooperatives, on whose equipment the broadband technology would be attached, opposed the legislation because of an amendment attached at the request of the state’s big communications companies forbid co-ops from competing for the internet business for most of their customers who already were connected through phone and cable lines, albeit often with much slower speeds.

Mizell said she had met Friday with officials from the large communications companies, the rural cooperatives and the Louisiana Public Service Commission to agree on wording that was approved before the full Senate voted on the measure Sunday night. She added that Edwards had seen the agreement and “he’s good with it.”

Jeff Arnold, chief executive officer of the Association of Louisiana Electric Co-ops, sat in the Senate gallery watching the vote and said he backed the new bill.

Nonprofit rural cooperatives were formed about 80 years ago during the New Deal to provide electricity in regions of the country too sparsely populated for investor-owned utilities to turn a profit. The co-ops already have the right-of-ways established and the poles erected to serve about 1 million rural customers, whom they call members. Broadband companies will be able to attach their equipment to the co-ops’ apparatus to hurry the high speed internet connection.

Judge sides with Louisiana governor in feud with treasurer