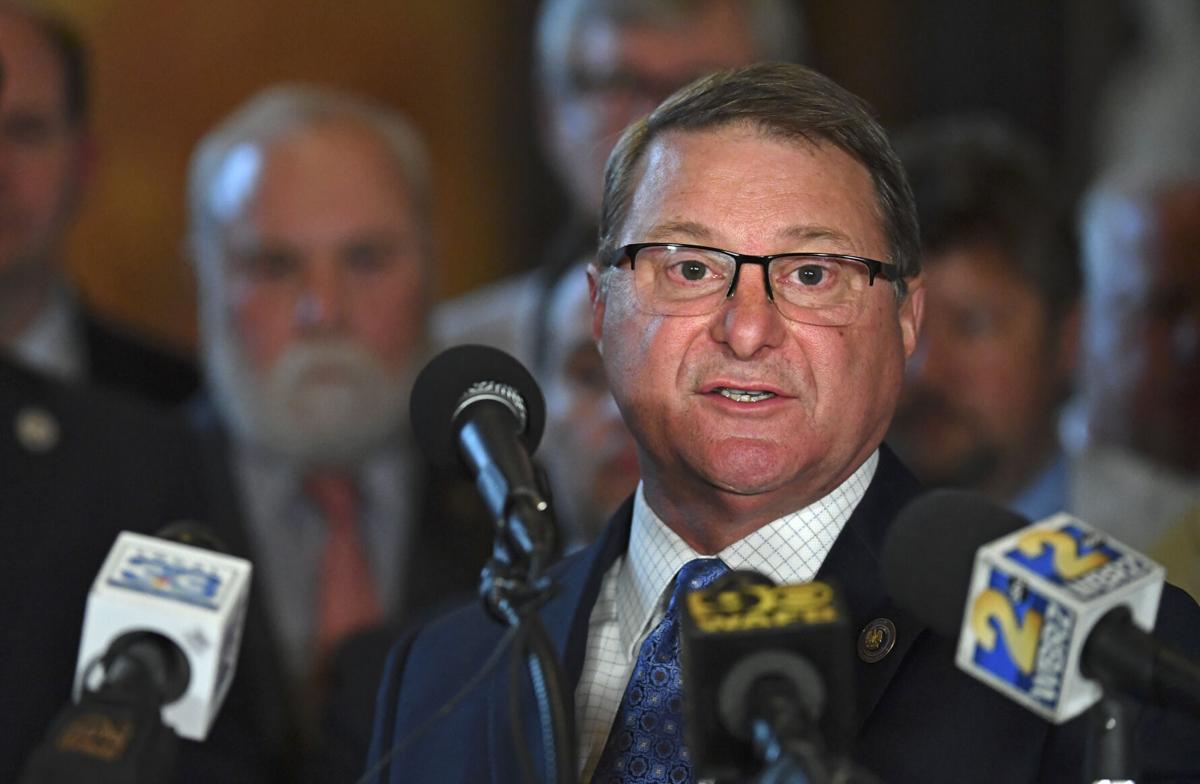 President of the Senate Sen. Page Cortez, R-Lafayette, speaks during a press conference after the conclusion of legislative session, Thursday, June 10, 2021, at the Louisiana State Capitol in Baton Rouge, La. 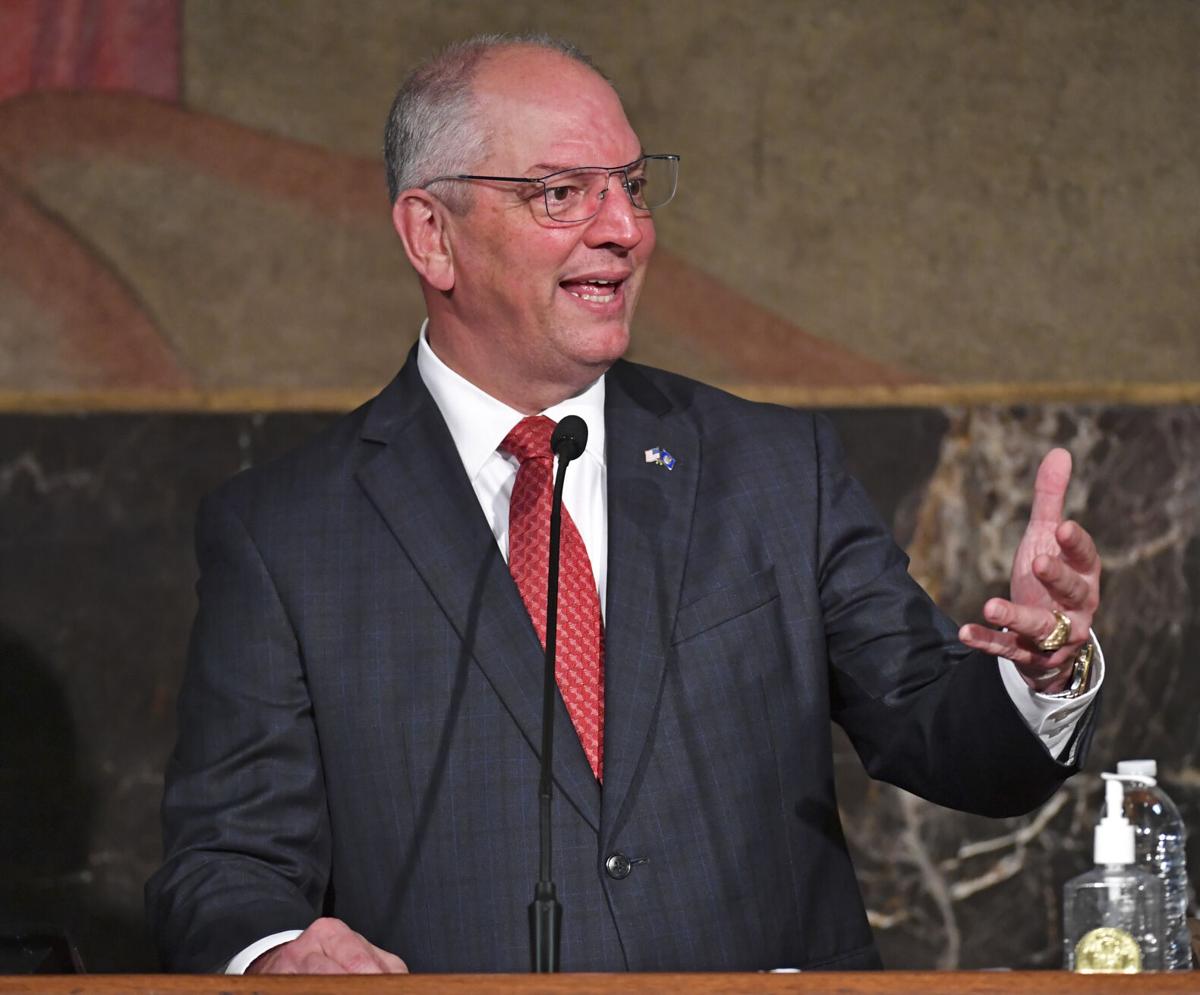 Gov. John Bel Edwards speaks during a press conference at the conclusion of the regular legislative session, June 10. 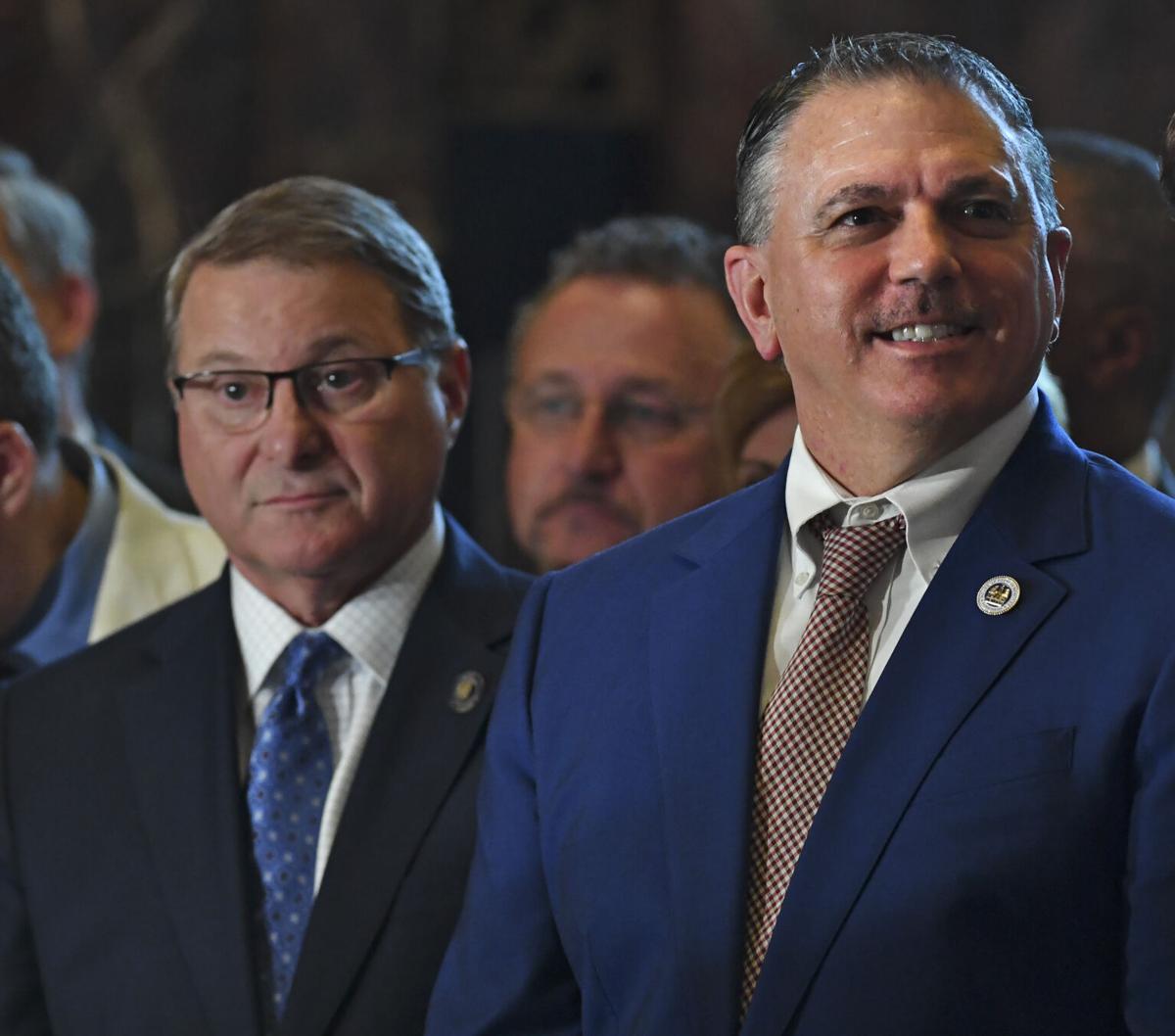 President of the Senate Sen. Page Cortez, R-Lafayette, left, and Speaker of the House Rep. Clay Schexnayder, R-Gonzales attend a press conference after the conclusion of legislative session, Thursday, June 10, 2021, at the Louisiana State Capitol in Baton Rouge, La. 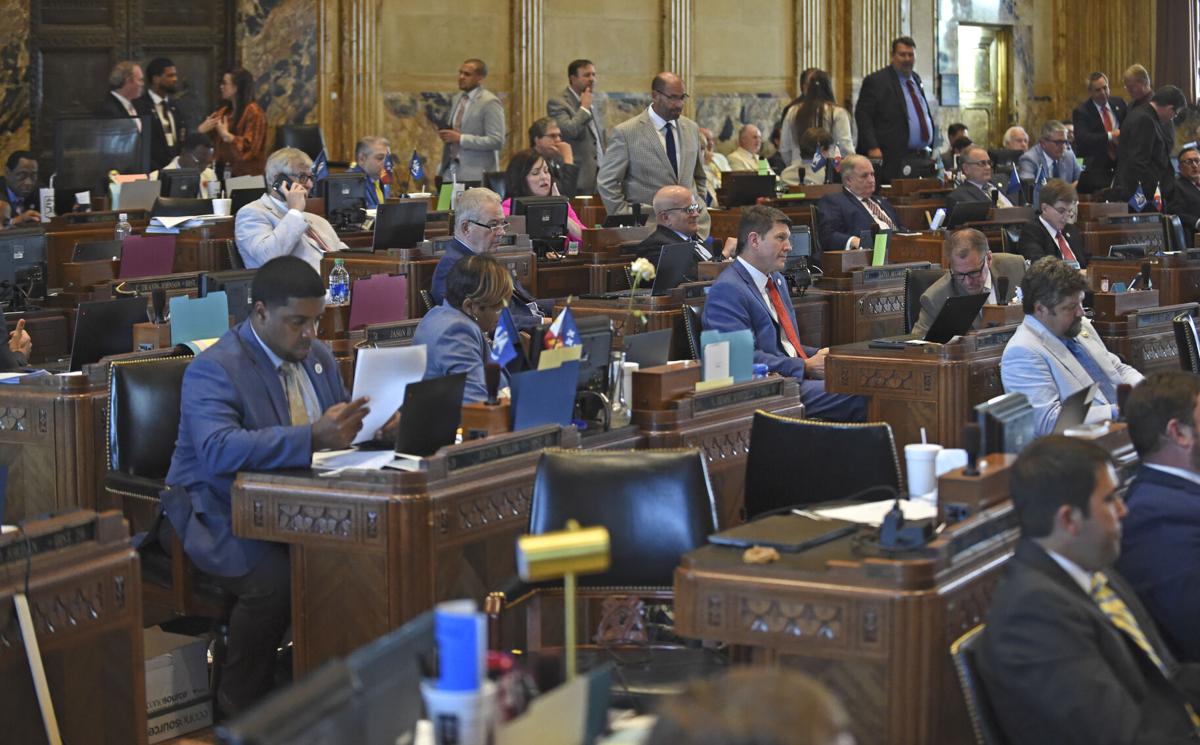 President of the Senate Sen. Page Cortez, R-Lafayette, speaks during a press conference after the conclusion of legislative session, Thursday, June 10, 2021, at the Louisiana State Capitol in Baton Rouge, La.

Gov. John Bel Edwards speaks during a press conference at the conclusion of the regular legislative session, June 10.

President of the Senate Sen. Page Cortez, R-Lafayette, left, and Speaker of the House Rep. Clay Schexnayder, R-Gonzales attend a press conference after the conclusion of legislative session, Thursday, June 10, 2021, at the Louisiana State Capitol in Baton Rouge, La.

Though the nine-week legislative session that ended Thursday was punctuated by sharp racial divisions and occasional altercations, the 2021 Louisiana Legislature passed a remarkable number of bills on issues that have been put off for years.

Some of the lawmakers with more extreme views spent a lot of time talking at each other on the chamber floor and in committee. But others spent the time, mostly in private, talking with each other and came up with deals between the partisan extremes.

“Politics is what politics is. I knew that cooler heads would prevail,” said Sen. Bret Allain, the Franklin Republican who spent much of the session closeted with legislators of different stripes and special interests with different goals to find the right wording in the seven-bill “tax swap” package that could revamp the tax system for the first time in a generation.

“We met behind closed doors with a lot of groups and a lot of people, so that they would speak freely,” Allain said. “We navigated a path to where we literally got the camel through the eye of the needle.”

Are you willing to give up a popular deduction on your state taxes in exchange for being assessed at lower income tax rates?

The year that began with worries of another huge deficit caused by the COVID-19 shutdown was relieved by an influx of federal stimulus dollars. Legislators spread around the money, including filling the empty coffers of the fund that pays unemployment benefits. Still, divisions over how to address police misconduct and how to teach issues of race threatened to sideline fiscal issues.

But House Speaker Clay Schexnayder, R-Gonzales, and Senate President Page Cortez, R-Lafayette, managed to weave through the hard feelings and refocus lawmakers on restructuring the tax system and better funding roads and bridges.

Now it is up to Democratic Gov. John Bel Edwards over the next few weeks and Louisiana voters on Oct. 9 to decide what becomes law.

The exact number of bills that cleared legislative hurdles is unclear as staffers worked through the weekend to complete paperwork and get the instruments to the governor. So far, Edwards has signed 128 measures into law and will decide on the others in the coming days.

One already signed makes the third Saturday in June a new state holiday: Juneteenth to remember when slaves learned they had been freed in the Emancipation Proclamation.

Edwards, who was a part of some negotiations but generally kept out of the fray, is expected to veto some social measures approved by the majority Republican Legislature, such as a ban to keep transgender youths from competing on girls' sports teams in schools; and legislation that does away with training and permits required to carry a concealed handgun. He backs the $38 billion spending plan for the fiscal year beginning July 1, but used his line-item veto to strike a handful of pet projects and language that would have given legislators more oversight of agencies' financial decisions.

Edwards has tirelessly supported vaccinating Louisiana residents and seems likely to reject legislation to prohibit government agencies from refusing to issue licenses or barring access to public facilities to the unvaccinated.

“I will tell you they’ll have a high bar to get over in order to meet with my approval,” Edwards said.

“There’s a lot of good legislation,” Edwards said, adding that he would do a deep dive into some of the bills he generally backs but on which he’s not yet ready to decide.

In addition to the seven-bill tax swap, Edwards will be looking at legislation that would end $300 federal addition to unemployment benefits a month early, but increase the state’s weekly allowance by $28 starting in January; substantial and recurring funding for fixing roads and bridges for the first time in nearly four decades; a system to buy a voting system using paper ballots; and 11 days for early voting in presidential elections instead of seven.

He also needs to decide whether exempt purchases of diapers and feminine hygiene products from state sales taxes starting next year, and to continue the Earned Income Tax Credit that helps the working poor through 2030.

Everyday people will notice more immediately, provided the governor signs those bills, that possession of less than a half ounce of marijuana would be met with a ticket of no more than $100 rather than jail time. Parents would have to start their children’s schooling with kindergarten at age 5, rather than the first grade by age 7; and those who wager on sporting events would be able to do so from their laptops, smart phones, or while eating dinner at a restaurant that serves alcohol.

Pay for public school teachers would increase by $800 and by $400 for school bus drivers, cafeteria workers and other support staff; and salaries would increase 2% to 2.5% for higher education faculty. Lawmakers also allotted up to $20 million per year, or 25% of proceeds from sports betting, for early education programs.

Legislation urged the governor to see that 50% of college governing boards are filled by women by July 1, 2023; video cameras in some special education classrooms; and a measure aimed at ensuring transparency in local school board financial transactions.

After 13 years of either draconian budget cuts or flat funding, the state’s colleges and universities saw an increase of about $100 million, which will help fully fund the TOPS grant that covers tuition for students reaching certain academic achievements, and expanded aid to economically disadvantaged students. Passing a course in African American history was added as a way to meet the Social Studies requirement for the Taylor Opportunity Program for Students.

Bills that failed would have banned spanking and other forms of corporal punishment in public schools; required seat belts on school buses; revamped how American history and civics are taught in public schools; as well as paving the way for school districts to experiment with year-round school calendars.

The Legislature approved stopping police from using chokeholds and no-knock warrants. But legislators refused to limit qualified immunity for officers in cases where allegations of wrongful death or excessive force have been raised.

The movement to readjust the criminal justice system and avoid just packing those convicted of crime off to prison also saw more than a dozen bills clear a Legislature that only a few years ago passed harder punishments at every opportunity.

Many of the recently elected Republicans were children during the “Just say no” and “War on Crime” era of the 1980s and early 1990s, said Will Harrell, a lawyer for VOTE, or Voice of the Experienced. “These young Republicans aren’t vested in the that whole tough on crime stuff as some of the older guys are,” Harrell said.

Edwards signed into law a measure that realigned all the various parole eligibility rules that had cropped up over the years for people sentenced to at least 30 years who had served 20 years and had reached the age of 45, thereby opening an avenue for about 1,000 inmates to seek release.

The Legislature approved a sweeping bill Thursday that would gradually boost state aid for roads and bridges by about $300 million per year, w…

Little was expected in dealing with potholes in roads and closed bridges this year. But a proposal, worked out literally in the last minutes of the session, would gradually boost state aid for roads and bridges, eventually to $300 million per year by shifting vehicle sales taxes from the state general fund, used to pay operating expenses, to the $14 billion backlog of roads and bridges projects.

Much of the details were worked out behind closed doors.

“We were trying to get the infrastructure piece to a place that gave people as much comfort as possible with the general fund,” said Sen. Rick Ward, R-Port Allen. “When you’re trying to get 70 (votes out 105), you kind of get sandwiched in.”

Edwards said the legislation pits transportation needs against future budget problems that could total $800 million by 2025 when the transportation transfer of revenues and the expiration of the temporary 0.045% sales tax increase both go into effect. Added into that mix is the federal reimbursements for Medicaid, a huge part of the state’s budget, will slow down at the end of this year, requiring the state to kick in more.

“There's a lot of question marks out there," Edwards said.

On the tax swap bills, Edwards said he needs to look further, but “I expect to support those bills.”

The Public Affairs Research Council of Louisiana stated that the tax system would become “simpler, fairer, more competitive,” while the Council for a Better Louisiana called the package “a positive step forward.”

The Legislative Budget Project, which reviews tax policy impact on low- and middle-income families, said legislators should have viewed removing the federal income tax deduction as way to reduce sales taxes, which impact lower earning people the most.

The tax swap legislation that Schexnayder and Cortez call “a monumental achievement” that was accomplished when legislators of opposing ideologies reasoned together.

“I hope that the citizens understand that what we were doing with an archaic tax system is simplifying it. We couldn’t have done without all the members,” said Rep. Stuart Bishop, R-Lafayette.

Tyler Bridges, Sam Karlin and Will Sentell of the Capitol news bureau, Melinda Deslatte of Associated Press, and the LSU Manship School News Service, contributed to this report.

Sports betting is on the way in Louisiana as Gov. John Bel Edwards signed the legislation Tuesday to create the protocols and regulation of wa…