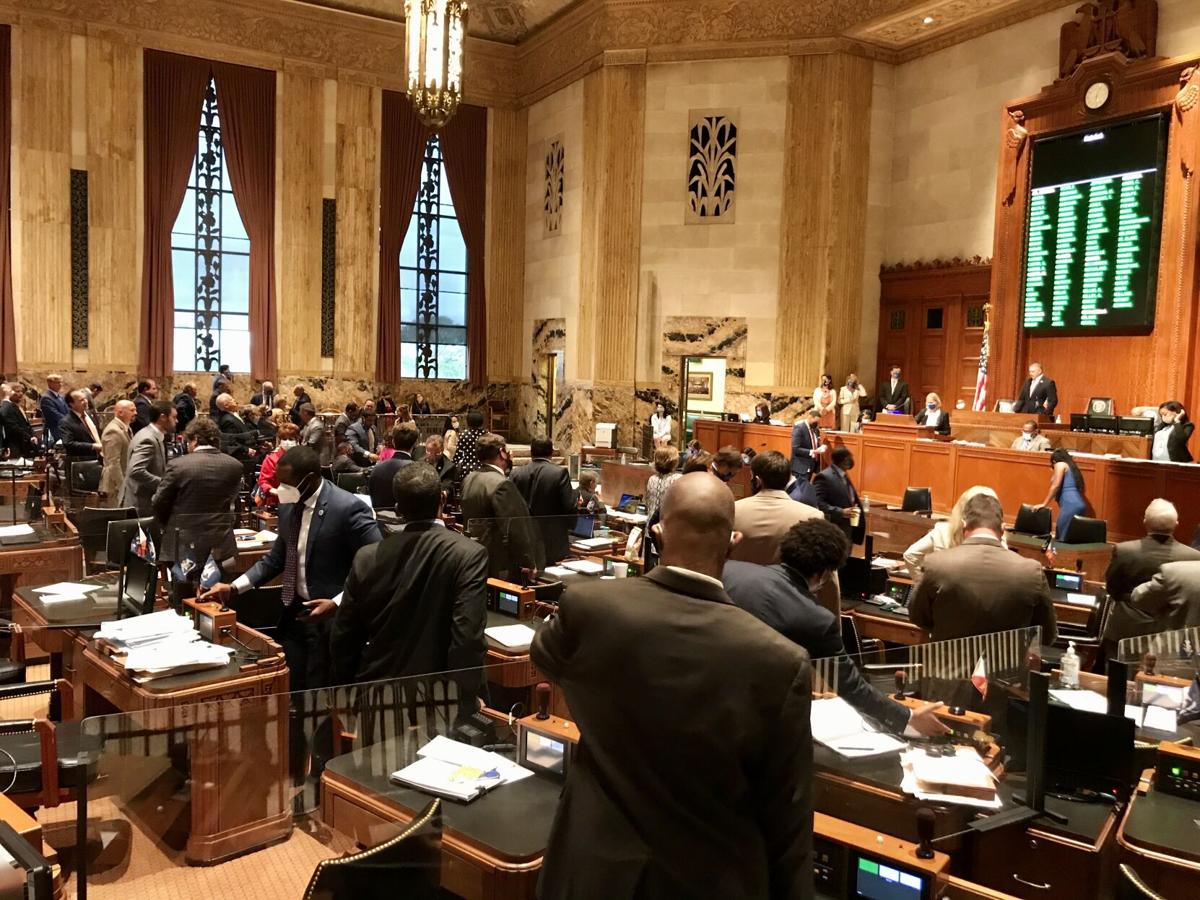 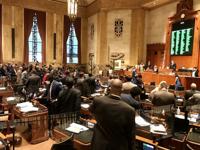 The Louisiana House of Representatives open for the second Special Session of 2020 on Monday night, Sept. 28, 2020. Lawmakers have convened to address 70 issues, particularly the governor's directives on the coronavirus pandemic. 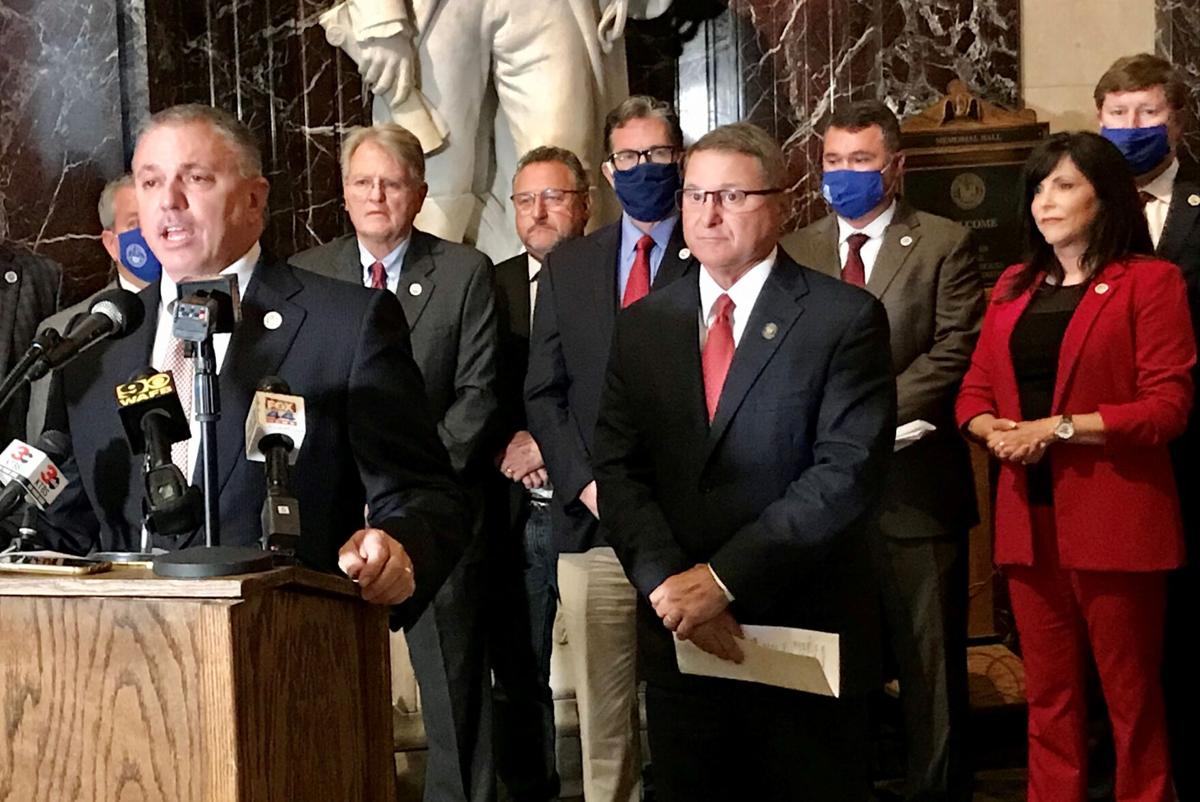 The Louisiana House of Representatives open for the second Special Session of 2020 on Monday night, Sept. 28, 2020. Lawmakers have convened to address 70 issues, particularly the governor's directives on the coronavirus pandemic.

As the gavel fell Monday evening, the Louisiana Legislature began a month-long session specially-called by Republican lawmakers to review bills on a long list issues, the foremost of which are Gov. John Bel Edwards' coronavirus restrictions.

With little fanfare, members of the Louisiana House and state Senate shuffled through a few dozen bills and resolutions, assigning the measures to committees for further hearings, then recessed for the day within 50 minutes.

The push to give lawmakers a say in coronavirus rules started taking shape. Republican lawmakers are circulating petitions to end the emergency health declaration that underlies a sheaf of directives to lessen the spread of the deadly COVID-19, but also have led to widespread shutdowns of business activities and unprecedented unemployment. GOP legislators – including Senate President Page Cortez and House Speaker Clay Schexnayder – want to give the Legislature a seat at the table in emergency powers.

"The Legislature is a co-equal branch of government ... and we should have a seat at the table," Cortez said.

Asked what specific components of Edwards' coronavirus restrictions he objects to, Cortez said merely that lawmakers want a "seat at the table." Republicans have railed against a host of the rules, including restrictions on bars and restaurants and visits to nursing homes.

Schexnayder laid out four priorities: Hurricane Laura relief, coronavirus relief to businesses, addressing the governor's emergency powers and shoring up the fund that pays unemployment claims. The latter is the top priority of the Louisiana Association of Business and Industry, the top business lobby, and the governor has said he wants to find a way to replenish the fund to avoid an automatic tax on businesses and a cut to benefits.

The state House also swore in Rep. Joseph Orgeron, a Larose Republican who was elected to fill the seat left vacant by Rep. Reggie Bagala. Bagala died in the spring from COVID-19 complications.

Some lawmakers in both chambers, but not all, wore face coverings, much like in the spring and summer legislative sessions. Some of the lawmakers in the House also removed plexiglass partitions separating desks, which were installed in an effort to prevent the viral spread of the coronavirus.

State Sen. Ronnie Johns, R-Lake Charles, made note of the state’s twin challenges – COVID-19 and recovery from Hurricane Laura – in his opening prayer in the Senate. “Father, our people are hurting like no other time in our state’s history,” said Johns.

The session, called by Republican lawmakers, instead of the governor, comes nearly seven months after Louisiana confirmed its first case of coronavirus, on the first day of the regular Legislative session back on March 9.

Fed up with being sidelined coronavirus decisions, Republicans want to take on Edwards' emergency powers to close down bars, limit capacity in restaurants and make other sweeping regulations by executive order.

Speaker Pro Tem Tanner Magee, a Houma Republican, said GOP lawmakers in various camps have a common goal of having a role in the governor's restrictions.

“That’s a long time to let one person in a democracy make decisions," Magee said. "If (Edwards) had done a better job of communicating with the Legislature I don’t think we’d even be here."

The governor has denounced the effort to change or limit his ability to issue emergency declarations. He said the state Constitution bestows the authority to him, and that "you cannot respond to a public health emergency by committee."

The controversy over Edwards' executive orders isn't new. In the regular Legislative session, this spring, Republican legislators threatened legislation that would take away the governor's ability to enforce restrictions. Shortly thereafter, Edwards loosened the coronavirus rules, though he said the decision was only made because the data allowed him to do so.

Now, some lawmakers say they want a more robust change in state law to give the Legislature a role in the process.

"At some point the Legislature should be involved in these strong decisions that are really consequential," said Rep. Mark Wright, R-Covington. “So many of us in the House and the Senate got a lot of constituents calling us dumbfounded that we really couldn’t do anything about it.”

Mark Ballard: A power struggle is at the root of Louisiana's latest special session starting Monday

Gov. John Bel Edwards was correct when he said the special session, which only is supposed to focus on one or two items, will be more like a r…

Wright, who filed a bill to require the Legislature to approve an emergency declaration after 30 days, described the legislation as an effort to give lawmakers the ability to negotiate with the governor. If lawmakers are upset about a rule to require bars to close at a certain time, for instance, they could tell the governor they will reject his emergency declaration unless it is changed. Several other bills aim to accomplish something similar.

Then there's the nuclear option: A petition signed by a majority of either the House or Senate that would effectively revoke all coronavirus rules, allowing bars, restaurants, amusement parks and all other businesses open to 100% capacity, with no social distancing or mask requirements.

In July, state Rep. Tony Bacala, R-Prairieville, came out against a petition to nullify the public health emergency for two months, after contracting the virus himself. Now, he is backing a new petition to end the declaration for 14 days.

In the governor's press room on the fourth floor of the State Capitol on Monday, Bacala and more than a dozen other lawmakers met with Dr. Alex Billioux, who joined remotely to field pointed questions about the state's coronavirus statistics. Bacala said members wanted to know about how the state is counting deaths, and whether the mask mandate was the true cause of a downturn in infections, among other things.

Bacala said he has come around to the petition idea in part because "it's been six months" of restrictions.

The petition is seen by many Republicans as a way to hold leverage as the session goes forward. The GOP doesn't have the votes on their own to override an Edwards veto in the House, so the petition could hang over the governor's head as he decides whether to sign or veto a bill.

"If legislation fails, including by veto, we have an avenue to do something," Bacala said.

Staff writer Will Sentell contributed to this story.