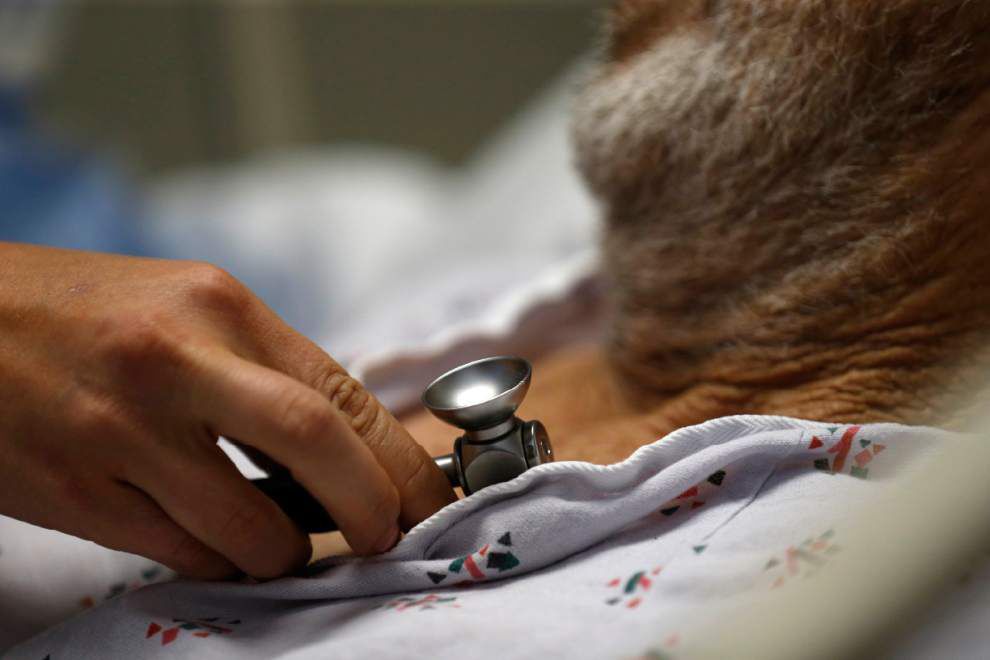 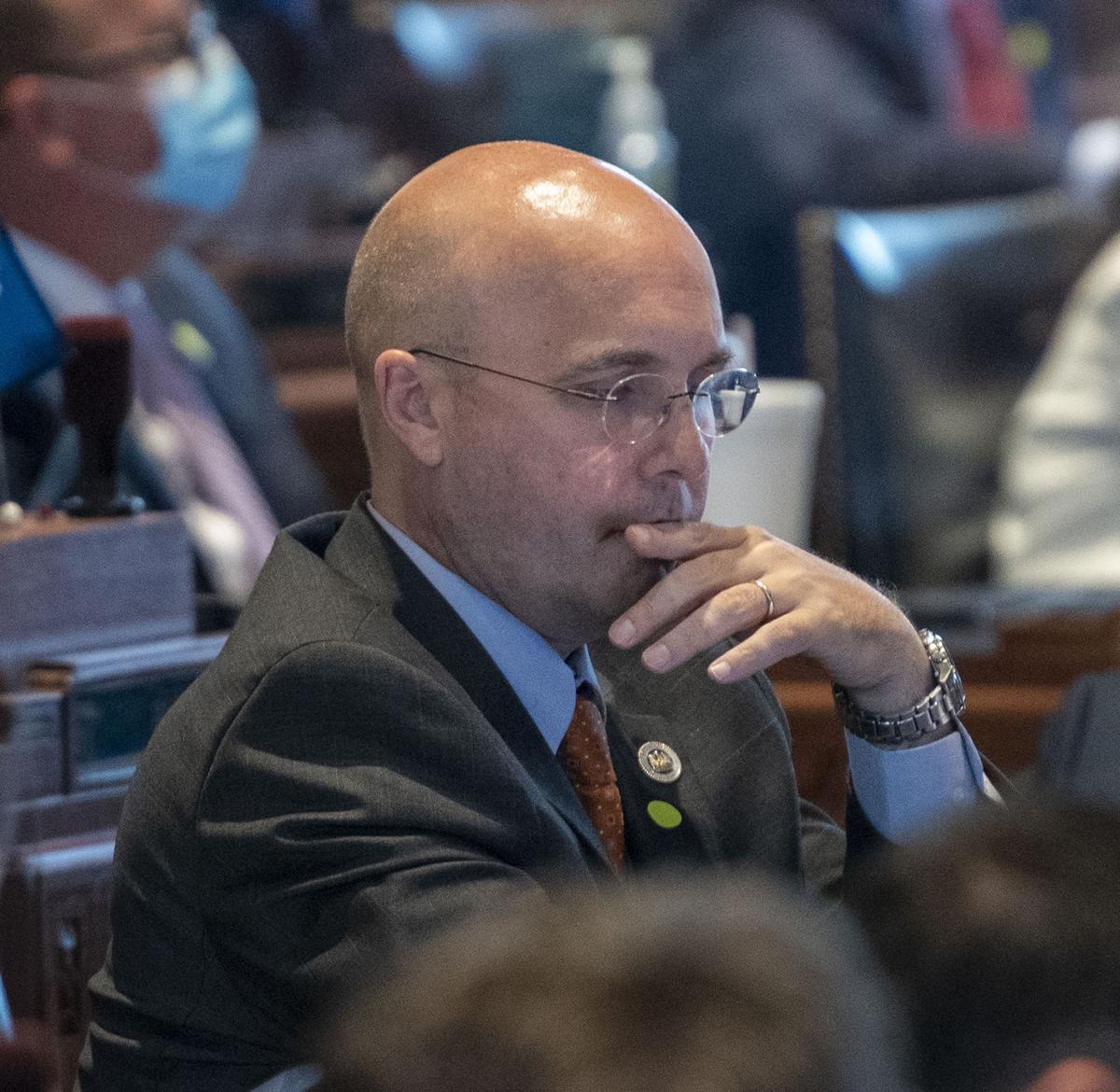 House Education Committee Vice-Chairman Mark Wright, R-Covington, presided over the panel's meeting Tuesday in place of Rep. Ray Garofalo, R-Chalmette, the chairman of the panel who is embroiled in controversy.

House Education Committee Vice-Chairman Mark Wright, R-Covington, presided over the panel's meeting Tuesday in place of Rep. Ray Garofalo, R-Chalmette, the chairman of the panel who is embroiled in controversy.

The state House on Tuesday approved legislation to roll back the use of noncompete agreements for doctors, amid a fierce battle between Ochsner Health System, which is fighting the bill, and doctors groups and other hospital systems pushing for it.

The House voted 56-38 to approve House Bill 483, by Rep. Mark Wright, to restrict the use of noncompete provisions for doctors. Members voted 68-23 for another bill by Rep. Larry Bagley, R-Stonewall, to ban their use entirely for public employees – a bill that arose out of LSU Health Shreveport's use of the provisions at that public institution, which is run in conjunction with Ochsner. House Speaker Clay Schexnayder voted in favor of both bills.

The bill still needs to be approved by the state Senate, and signed by Gov. John Bel Edwards, before becoming law.

Ochsner regularly deploys noncompete agreements when it hires doctors, meaning the physicians typically have to wait two years after leaving their jobs before they may start practicing in parishes where Ochsner does business. With Ochsner's growth, that puts a wide swath of the state off limits.

A behind-the-scenes war between some of the state’s largest health systems could soon spill into public view at the State Capitol, after month…

The system has been fighting against proposals to limit the noncompete agreements in state law for several years, and lobbyists for both sides have pushed hard in recent weeks to flip votes among House members. GOP megadonor Lane Grigsby even joined the fray, calling members – including Wright, the sponsor – to urge them to oppose the bill.

Franciscan Missionaries of Our Lady, which oversees the state’s largest hospital, Our Lady of the Lake Regional Medical Center in Baton Rouge, is among those pushing for the legislation, along with the Louisiana State Medical Society and LCMC, which runs several hospitals around New Orleans.

Wright, a Covington Republican, said Tuesday the legislation will help patients continue to see their doctor if she or he quits a hospital system, arguing physicians are routinely forced out of Louisiana when a noncompete is invoked.

“This is part of the problem. Some doctors have to leave the state because of these agreements,” Wright said. “There’s a difference between protecting an investment and restricting competition. There’s a fine line.”

Our Lady of the Lake spokesperson Ryan Cross said the Legislature "clearly realizes that patient care should be at the center of all health care policy decision-making" and that the system is encouraged by the House support of the bill.

Should Louisiana doctors have non-competes? Supporters lose first round of legislative battle

Ochsner Health System lost the first round of a legislative battle with Our Lady of the Lake Regional Medical Center, physicians groups and ot…

The legislation would ban noncompetes for primary care physicians and doctors employed by the state. It would prohibit noncompetes from staying in the contract of a specialist for longer than three years, and would establish a buyout clause for those three years. It would also limit the geographical area for all noncompete provisions to the parish in which a doctor practices plus two contiguous parishes.

Currently, state law allows noncompete provisions if they last no longer than two years after the employee leaves a company. The courts have also put some limitations on how expansive the provisions can be.

Opponents of the bill say doctors have the resources to hire lawyers to look over their contracts, and sign the noncompete agreements willfully. Ochsner and other hospital systems – including rural hospitals – want to be able to protect their investment by avoiding spending big money on a doctor only to see them leave for a private practice across the street, taking the patients with them. Wright said he’s working with rural hospitals to provide them an exemption.

"Louisiana law already limits time, geographic scope and business of these physician non-compete agreements," Hart said. "While a handful of states have decided to aggressively regulate this area, the vast majority of states do not ban physician non-competes, including neighboring states Mississippi and Texas. At Ochsner, we have used non-compete agreements that follow the state statue with reasonable restrictions on time and geographic scope."

Speaker Pro Tem Tanner Magee, R-Houma, proposed an amendment to extend the bill to all workers in all industries. Rep. Mandie Landry, D-New Orleans, offered a change to exempt from the bill any doctor who “voluntarily agrees to restrict himself from the practice of medicine” through the noncompete agreement. Wright called both amendments “poison pills.”

“I honestly don’t understand why we would treat doctors differently than anybody else,” Magee said. “I think plumbers and doctors should be treated the same.”

In what was called a fight between two major hospital systems, a state Senate committee advanced legislation that would limit noncompete claus…

Grigsby, one of the state’s biggest GOP donors, said he doesn’t think the government should be meddling in contracts between two private entities.

“Everybody has a right to sign a contract or not sign a contract,” Grigsby said in an interview. “Just because one party has the legislative clout to do something doesn’t mean it’s right to do it.”

It’s unclear whether the Senate will get on board with the legislation. In 2019, senators pushing a bill similar to Wright’s pulled the legislation after facing certain defeat. The Senate features a host of new members this time around, but Joel Robideaux, the former state representative who is a close friend and neighbor of Senate President Page Cortez, is a lobbyist for Ochsner.

Wright said his bill is “a bit of a compromise,” given the bill allows noncompete provisions for certain specialists. Ochsner disputes that the bill is a compromise. Proponents and opponents of the legislation met several times at the request of Cortez and other legislative leaders ahead of the hearings on the bill, but the two sides couldn’t reach an agreement.