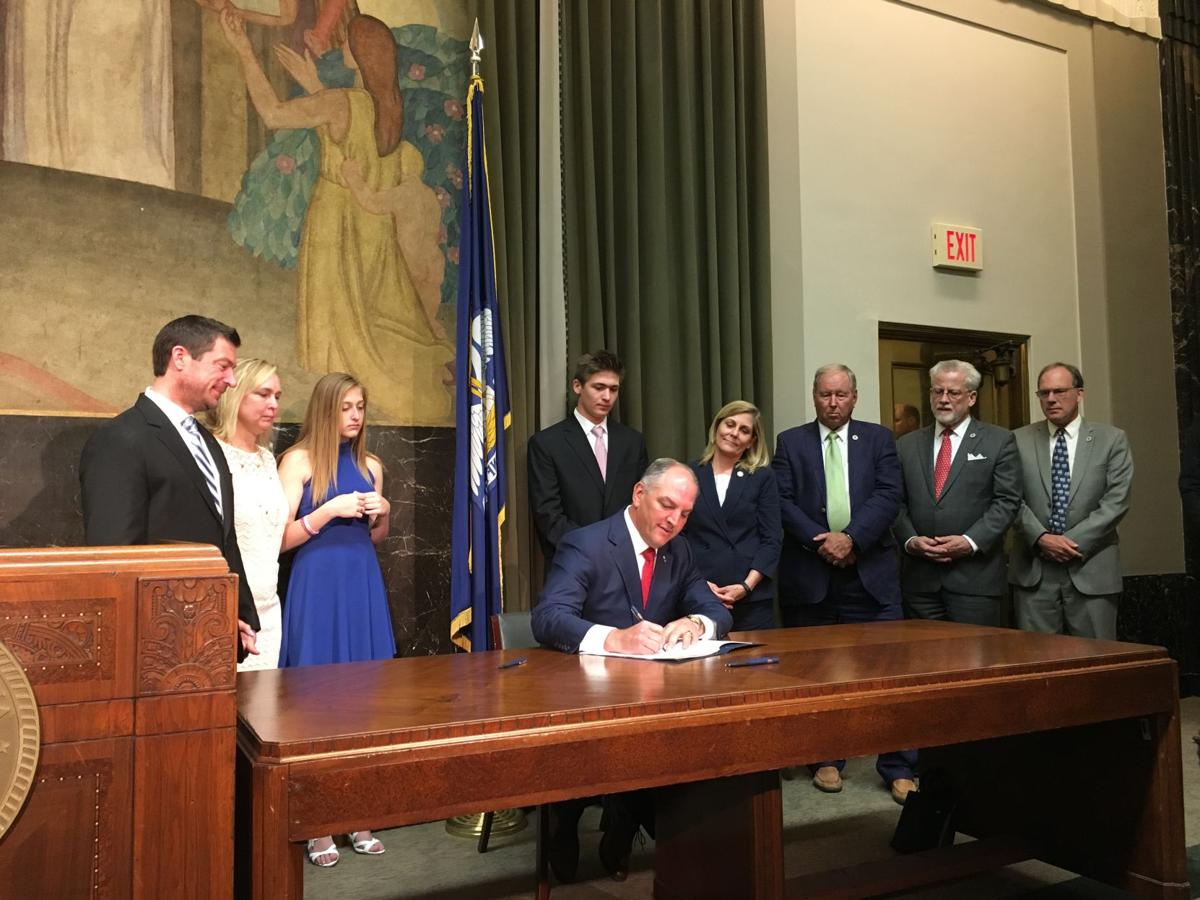 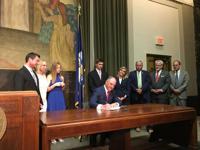 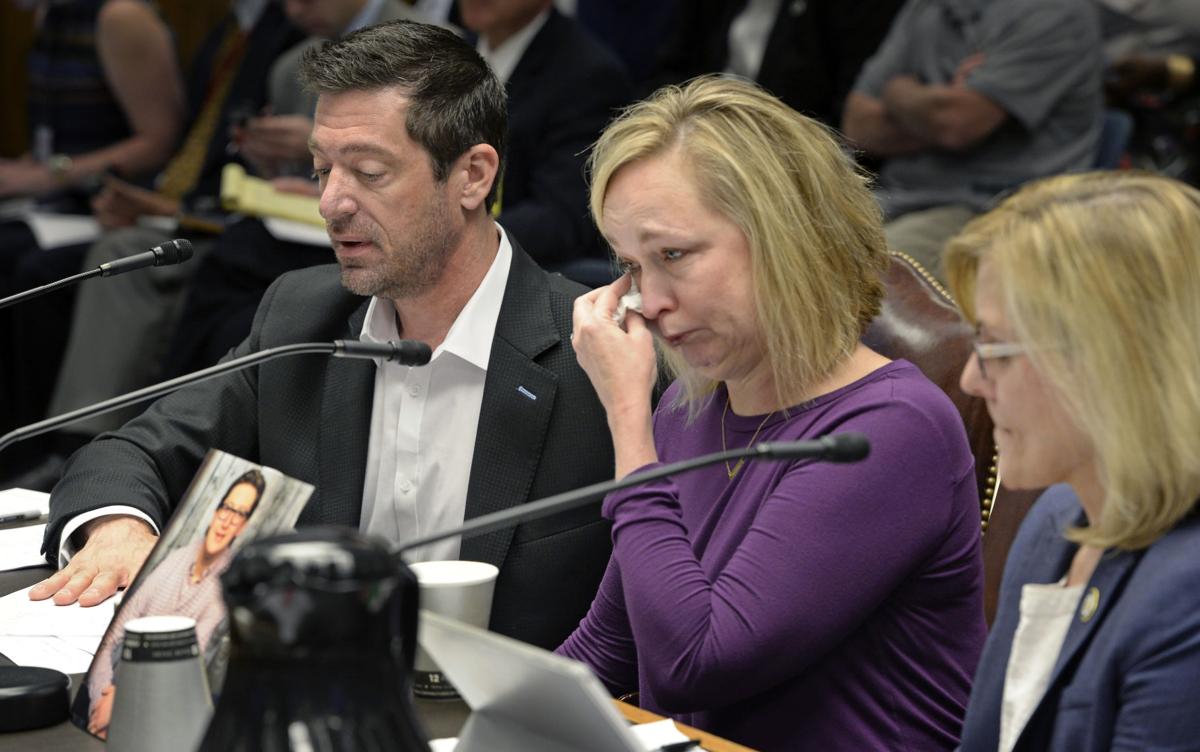 In the House Criminal Justice Committee, from left, Stephen Gruver testifies as Rae Ann Gruver wipes a tear from her eye on HB78 by Rep. Nancy Landry, R-Lafayette, right, which is a bill to increase criminal penalties for hazing related to the death of Max Gruver at LSU Wednesday March 21, 2018, in Baton Rouge, La. Max Gruver's photo is in front of the trio. 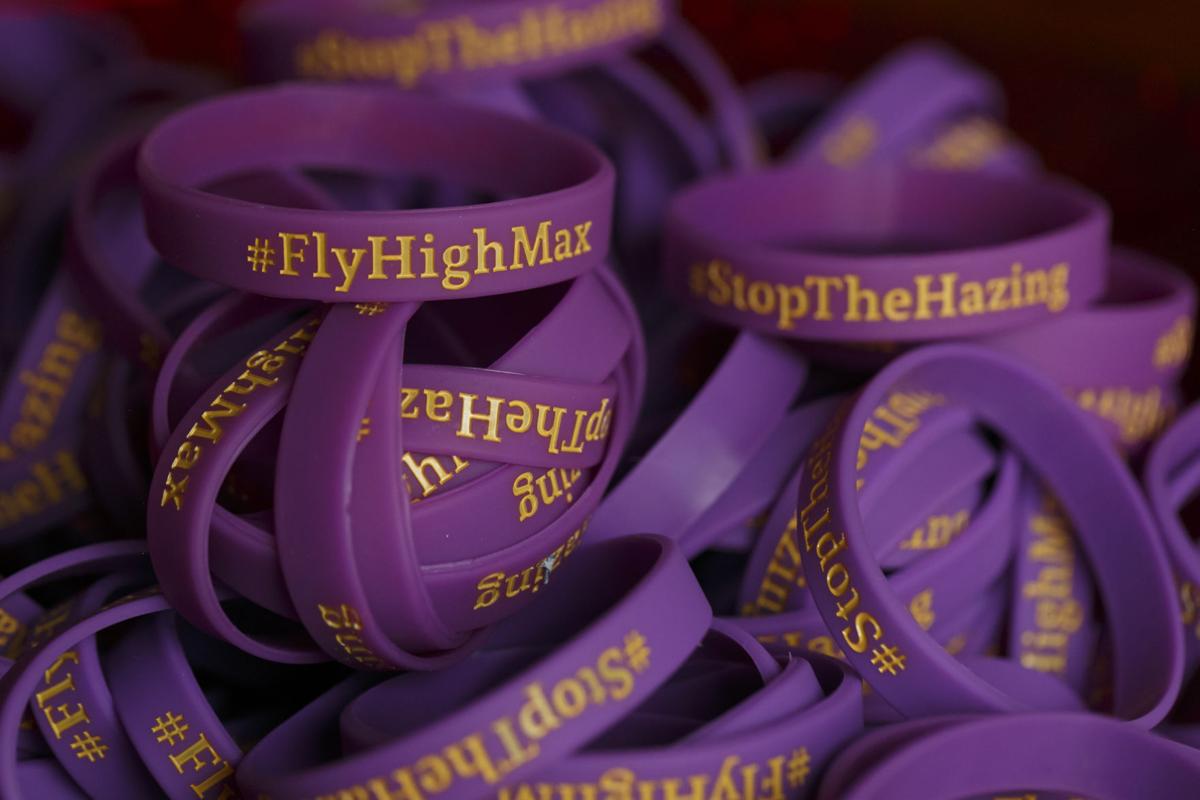 Rae Ann and Stephen Gruver have sent out 30,000 wristbands so far as part of their advocacy effort to end hazing. They started a nonprofit called the Max Gruver Foundation.

In the House Criminal Justice Committee, from left, Stephen Gruver testifies as Rae Ann Gruver wipes a tear from her eye on HB78 by Rep. Nancy Landry, R-Lafayette, right, which is a bill to increase criminal penalties for hazing related to the death of Max Gruver at LSU Wednesday March 21, 2018, in Baton Rouge, La. Max Gruver's photo is in front of the trio.

Rae Ann and Stephen Gruver have sent out 30,000 wristbands so far as part of their advocacy effort to end hazing. They started a nonprofit called the Max Gruver Foundation.

With a mixture of celebration and sorrow, the Gruvers on Thursday stood alongside Gov. John Bel Edwards as he signed into law a set of anti-hazing bills, including the Max Gruver Act, named for the family's eldest son who died at an LSU fraternity house only nine months ago.

Edwards used four pens, one for each member of the Gruver family – Max's mother Rae Ann, his father Stephen, and his younger siblings Alex and Lily Kate – who drove in from their home in Roswell, Georgia to watch the legislation inspired by their own tragedy become law.

"We believe it's groundbreaking and precedent-setting for the rest of the country," Stephen Gruver said. "These laws have components to them that just don't exist anywhere else."

Edwards said Louisiana's laws will be a model for other states grappling with how to combat dangerous hazing rituals and he expects other states to follow suit.

"We have to acknowledge that this issue does not just affect us because of Greek Life on campus," Edwards said. "Certainly, today does not mark the finish line. This is not 'mission accomplished.' This is a good start to what is going to be an ongoing process."

Under HB78, people who take part in hazing activities that result in death when the victim's blood alcohol level is at least .30 would face up to five years in prison and fines of up to $10,000.

Hazing that doesn't lead to death would be subject to fines of up to $1,000 and six months in prison. A hazing conviction under current law carries a maximum $100 fine and 30 days behind bars.

State Rep. Nancy Landry, a Lafayette Republican who sponsored HB78, has said her bill was prompted by Gruver's death, which along with similar cases has helped ignite a national debate over how to prevent future hazing-linked tragedies and whether existing anti-hazing laws are stringent enough.

Sponsored by Rep. Steve Carter, R-Baton Rouge, House Bill 793 will require universities and colleges to expel or suspend students who haze others. It will also require groups to report suspected hazing and mandate anti-hazing education.

Additionally, the state Board of Regents must now develop a uniform policy on hazing prevention for all colleges and universities in the state that includes adding hazing education to new student orientation. Greek organizations and other student life groups would also be required to provide at least an hour of hazing prevention education for all members and prospective members.

House Bill 446, sponsored by Republican Rep. Reid Falconer, of Mandeville, requires that any person at the scene of an emergency where another person suffers serious bodily harm give reasonable assistance to the injured person including seeking help or reporting the need for help to the appropriate authority. Persons who fail to immediately report the need can be criminally charged with a fine up to $1,000, imprisoned up to one year or both. If the injury results in death, the offender will be fined up to $2,500, imprisoned up to five years or both.

House Bill 270 by Rep. Frankin Foil, R-Baton Rouge, protects the identifying information of students that report violations of the student code of conduct.

The Gruvers said Thursday that the "bittersweet" legislation was only a "piece of the puzzle," and emphasized the importance of educating others, including high school students.

Since their son's death, Rae Ann and Stephen Gruver have been working to help other states establish anti-hazing law through their nonprofit — the Max Gruver Foundation.

The Gruvers said they hope to see LSU follow through with their recently established anti-hazing policies, which limit the consumption of alcohol at Greek Life events.

Gruver, 18, was one month into his first year of college at LSU when he died in what authorities have described as a hazing ritual at a fraternity house.

Rae Ann and Stephen Gruver have traveled to the Louisiana Capitol multiple times this year to advocate on behalf of the new law, testifying in emotional hearings about the loss of their son.

Louisiana will likely soon have harsher criminal penalties for those convicted of hazing, following last fall's death of an LSU freshman frate…

Police have said Gruver attended a fraternity initiation event and was forced to chug 190-proof liquor. His blood alcohol level was 0.495 when he died – more than six times the legal limit to drive.

Four former LSU students have been indicted in Gruver's death and have pleaded not guilty – one on a charge of negligent homicide and three others with hazing.

Phi Delta Theta fraternity has been banned from LSU's campus until at least 2033, following an investigation into the events that led to Gruver's death.

Three identical bills were filed during the special session to match Louisiana’s law with South Dakota’s in case the U.S. Supreme Court allows…