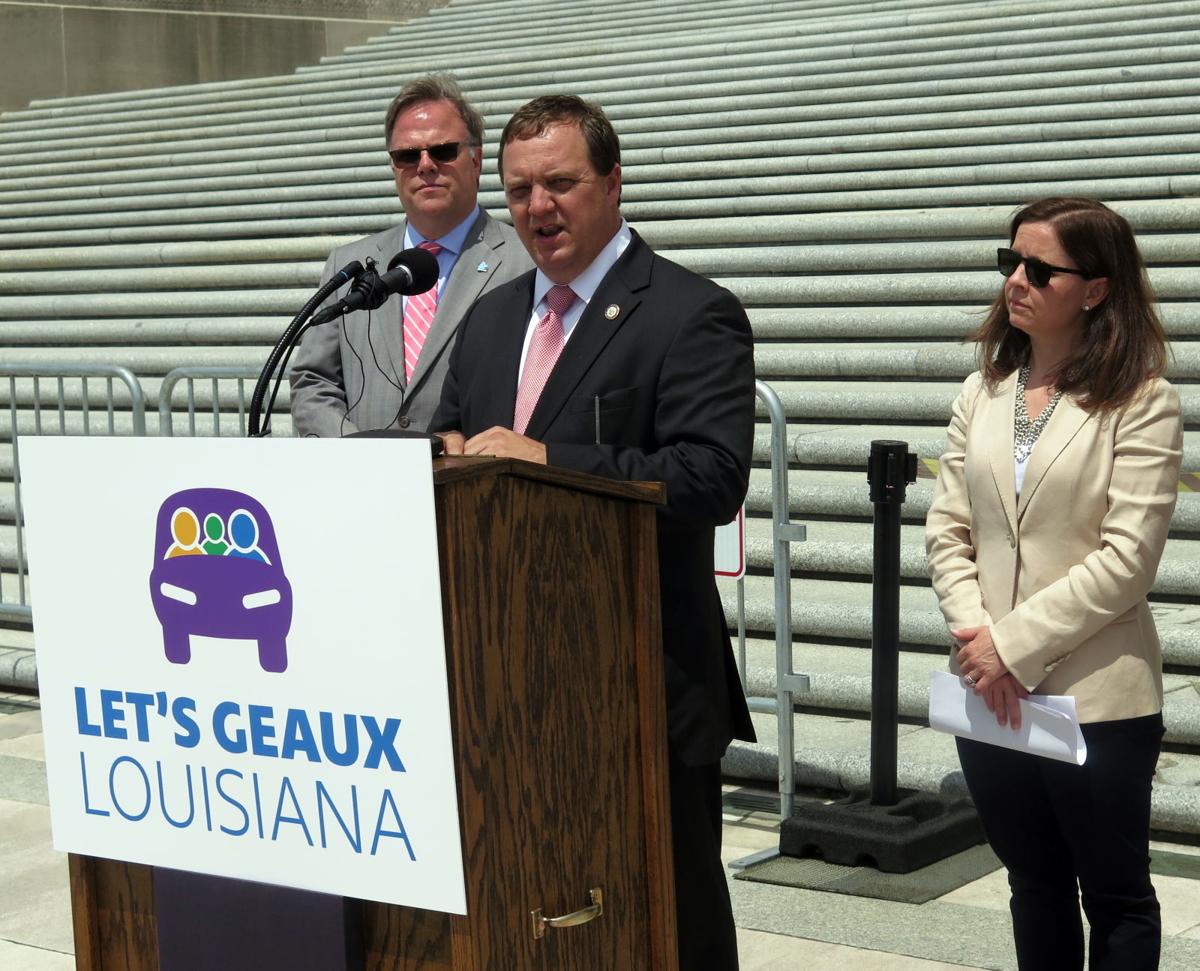 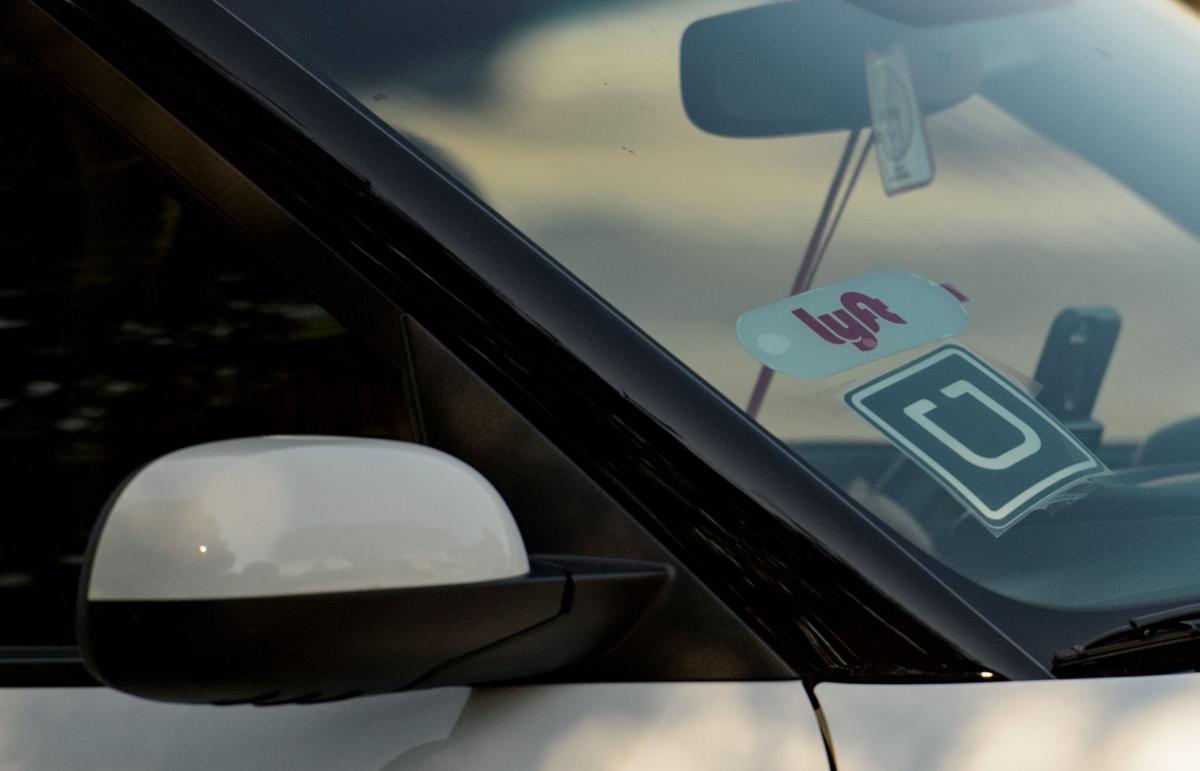 A Lyft and Uber driver drives outside Kenner City Hall in Kenner, La. Thursday, March 23, 2017, before the city council discussed passing controversial Uber and Lyft regulations including a possible fee for picking up drivers at the airport.

A Lyft and Uber driver drives outside Kenner City Hall in Kenner, La. Thursday, March 23, 2017, before the city council discussed passing controversial Uber and Lyft regulations including a possible fee for picking up drivers at the airport.

In a proposal sure to spark arguments, the state would enjoy total regulatory control over Uber, Lyft and other ride-sharing services under legislation that backers promoted Monday.

A coalition of supporters, called "Let's Geaux Louisiana," was on hand for a press conference to call attention to the measure.

The two-month session began at noon.

Backers said the legislation would give the state a single, regulatory framework over Uber and other services rather than relying on a wide range of rules among parishes.

Need a Lyft? The ride-booking service will be available in Baton Rouge Thursday, adding comp…

The bill would put the state Department of Transportation and Development in charge of enforcing the rules, including permits, driver requirements and disclosure of fares. The state would collect 1 percent of the gross receipts from the services. That money would then be sent to local governments where the rides originated, minus DOTD overhead expenses.

What is likely to spark controversy, however, is the part of the proposal that would ban local governments, special districts, airport authorities or port authorities from imposing taxes on firms that operate the services, drivers or vehicles, including any licensing requirements.

Officials of local governments may resist any effort to nullify chances for them to exercise oversight and collect revenue.

ways. It has fewer insurance requirements, less stringent background checks, does not require random drug tests or drug tests after crashes and does not prohibit surge pricing in emergencies.

The proposed state law also does not include prohibitions on discrimination in pick-ups and drop-offs and would not require the ride-hailing services to provide data that could be used to verify whether such discrimination is occurring, something that is including in the city ordinance.

“Why would you create a law that was less protective when they have already agreed to operate under our city’s law which is more protective?” Guidry asked.

Uber from Louis Armstrong? Kenner mulls airport pickup fees that could be highest in nation, 'possibly the world'

Citing the cost of street repairs around the airport, the Kenner City Council is considering…

Havard said current rules governing Uber and Lyft are a patchwork of regulations.

The advantage of a state plan, he said, is that it would ensure the same quality for riders whether ride sharing services are used in New Orleans or Bossier City.

Under the bill, airports could charge Uber and others pickup fees similar to those charged taxis.

Backers include the Louisiana Retailers Association, One Acadiana and the Greater Shreveport Chamber of Commerce.

They also said 40 other states have similar laws.

A spokeswoman for Lyft said market data, including how many use the service in Louisiana, is not publicly disclosed.

(Some information for this story was provided by Jeff Adelson, reporter for The New Orleans Advocate)

Legislation that would set up statewide rules for Uber, Lyft and other ride-booking services was approved Monday by a Louisiana House committe…

More regulations for Uber and Lyft in Louisiana? Bill heads to House

Legislation that would allow the agriculture commissioner to regulate Uber, Lyft and similar taxi services advanced to the House floor without…

Over objections from New Orleans lawmakers, a bill aimed at setting up uniform, statewide rules for Uber and Lyft won approval Wednesday in th…

Bill to set up statewide rules for Uber, Lyft shelved and possibly dead

A bill that would set up statewide rules for ridesharing services Uber and Lyft was shelved Tuesday in a Senate committee, killing the House-p…

Who should regulate Uber, Lyft in Louisiana? That question could kill ride sharing expansion effort

After three years of trying, the effort to expand Uber and Lyft statewide in Louisiana may hinge on one seemingly arcane point: Which state ag…