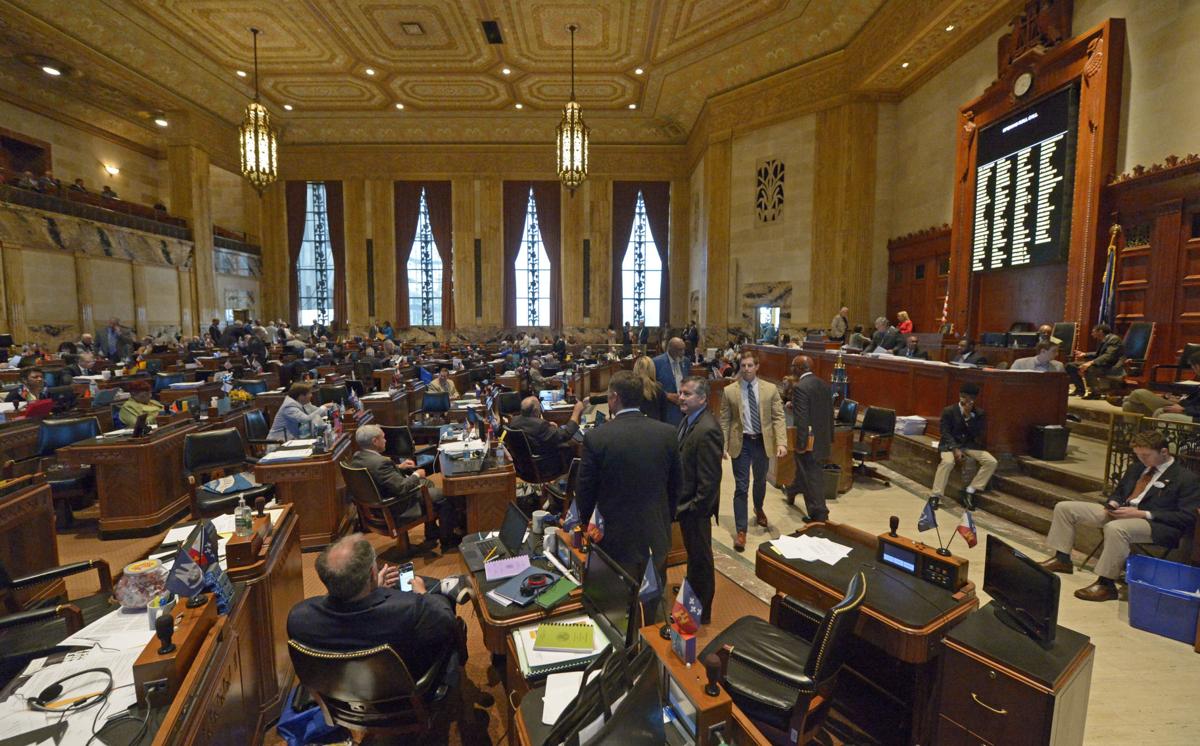 Members of the House of Representatives mingle before the meeting convenes, Tuesday, May 22, 2018, at the start of the legislative special session at the State Capitol in Baton Rouge, La. 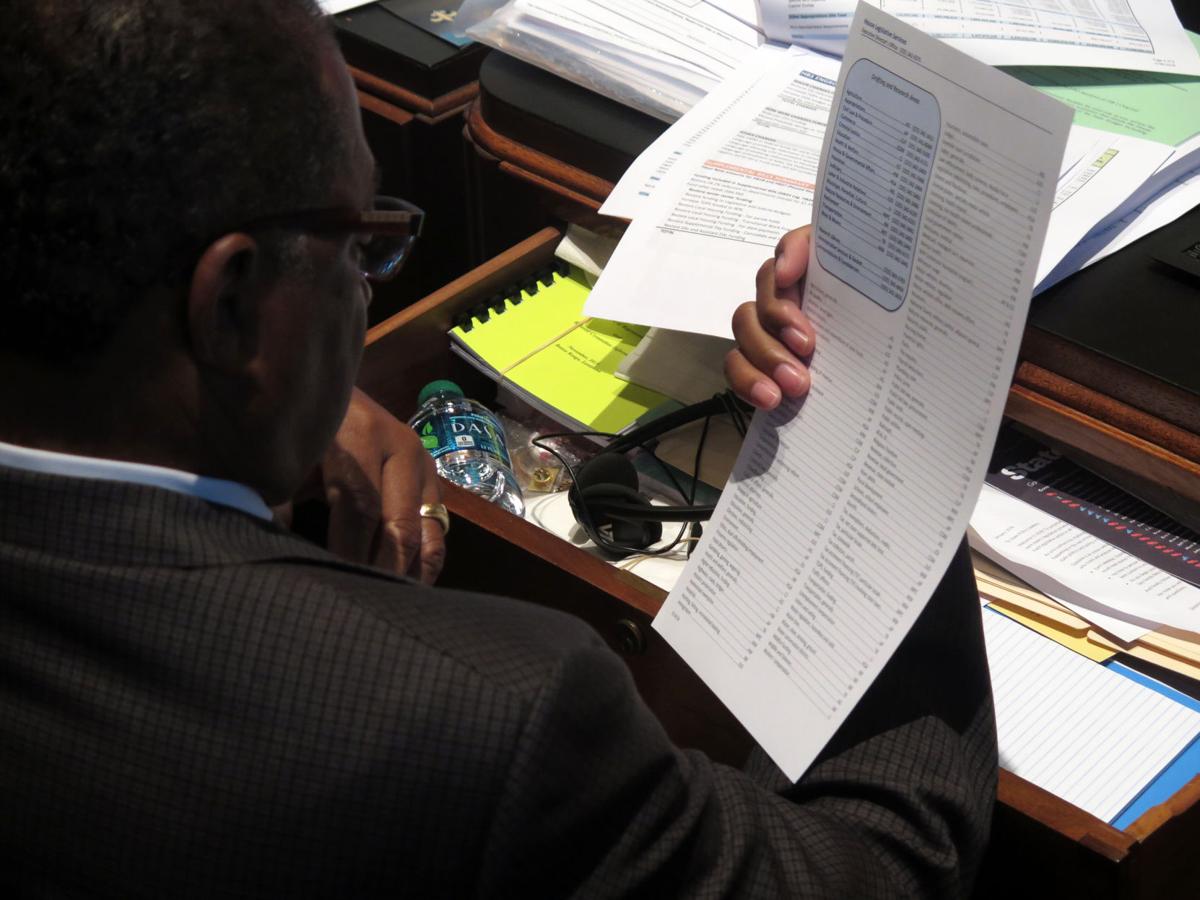 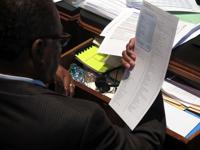 Advocate Photo by Mark Ballard -- Louisiana Rep. Jeff Hall, D-Alexandria, looks over fiscal rundowns during House debate Thursday, May 31, 2018, over the state's budget for the fiscal year that begins July 1.

Members of the House of Representatives mingle before the meeting convenes, Tuesday, May 22, 2018, at the start of the legislative special session at the State Capitol in Baton Rouge, La.

Advocate Photo by Mark Ballard -- Louisiana Rep. Jeff Hall, D-Alexandria, looks over fiscal rundowns during House debate Thursday, May 31, 2018, over the state's budget for the fiscal year that begins July 1.

The Louisiana House has a spending plan – a nearly $28.5 billion general operating budget, plus another $400 million in funds contingent upon any revenue raised before the special session ends Monday.

With less than three days left to work, budget and tax bills are being fast-tracked at the Capitol in what feels like a Herculean effort to stave off yet another special session and shore up the state's finances — at least for now.

"We have a lot of work to do in a short period of time," House Appropriations Chair Cameron Henry, R-Metairie, said on the chamber floor before the House voted on his two spending proposals, House Bill 1 and House Bill 35, on Thursday.

The Senate plans to work through the weekend to fast-track the budget and move tax legislation that is meant to address the $650 million fiscal cliff the state faces when temporary tax measures expire June 30.

The special session, which is the Louisiana Legislature's second of the year and sixth since February 2016 — all to address budget issues, must end by midnight Monday. If no budget wins final approval, lawmakers will be forced to hold another special session to adopt one by July 1.

Combined, HB1 and HB35, don't cut government services as deeply as a separate budget approved during the regular session. Gov. John Bel Edwards, a Democrat, vetoed that proposal, calling it "catastrophic" because it reflected cuts from the fiscal cliff.

But even if both are passed exactly the way the House approved on Thursday, the budget would still threaten funding for health care programs, including mental health and substance abuse treatment.

Without additional revenue, HB1 as it passed the House in a 96-5 vote, would fund TOPS at 80 percent and fully-fund higher education.

"I know the bill's not perfect, we're going to try to add some back," Henry said of the proposed operating budget that would take effect July 1.

HB35, which the House approved in a 96-7 vote, would dictate what is funded with the nearly $400 million in additional tax dollars that could be approved in the special session. It proposes shrinking the size of the cut to the Taylor Opportunity Program for Students in the coming year by 10 percent, leaving the scholarships 90 percent funded.

No additional revenue has won final passage at the State Capitol, as the end of the special session nears.

The House has agreed to about $400 million in additional revenue, mostly from an extension of one-third of a 1 percent sales tax hike set to expire June 30. House Bill 27 would also allow sales taxes to be charged on some items previously exempt.

In a late night meeting, the Senate Revenue and Fiscal Affairs Committee dramatically altered HB27 and passed an identical Democrat-sponsored measure to the Senate floor that significantly raised the amount of revenue that it would bring in to about $642 million, largely through allowing sales taxes to be charged to businesses and industries that currently receive breaks.

Edwards has urge lawmakers to raise enough money to completely bridge the looming gap, while Republican House leaders have insisted that part of the hole be made through cuts.

House Republican leaders have repeatedly said that HB27 will not pass the House if it returns as the Senate committee amended it.

In opening discussion on the supplemental spending bill, which had drawn many proposed amendments from members hoping to increase the funding wish list beyond $400 million, Henry urged members to "resist temptation" to spend more money as reflected in the Senate's proposal.

"We've already discussed problems with that bill," he said, noting that House members oppose tax hikes on manufacturing and agriculture sectors, in particular.

The House rejected all proposals to tack on additional revenue that may be approved later, except a $17 million amendment to fund programs for private and parochial schools if money becomes available.

Grace Notes: Speaking, or not speaking, of the budget