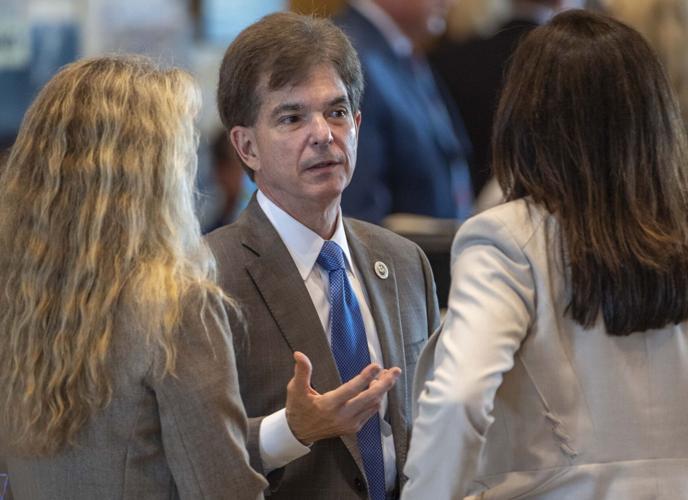 Rep. Ray Garofalo, R-Chalmette, said House Speaker Clay Schexnayder told him Wednesday morning that, if he tried to preside over the House Education Committee meeting, he would have him removed from the building or the meeting would be canceled. 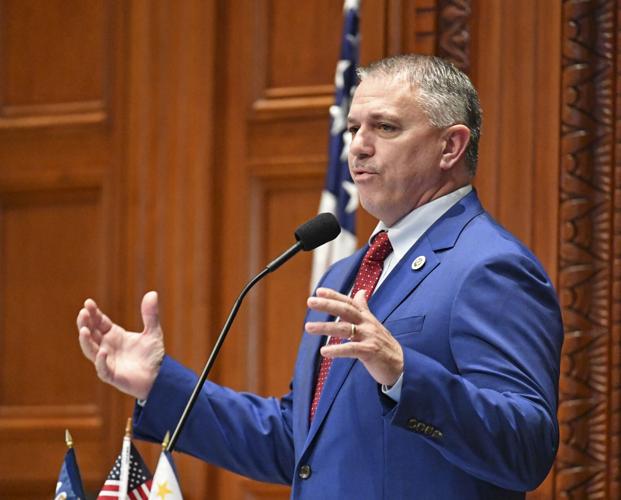 Rep. Ray Garofalo, R-Chalmette, said House Speaker Clay Schexnayder told him Wednesday morning that, if he tried to preside over the House Education Committee meeting, he would have him removed from the building or the meeting would be canceled.

In January 2020, Republicans in the Louisiana House divided into two camps in a bitterly contested election to choose the next speaker.

A smaller group sided with all of the House’s Democrats to elect Rep. Clay Schexnayder, a Republican, while the larger group of Republicans voted without Democrats in favor of Rep. Sherman Mack, who lost.

In the immediate aftermath, several Mack supporters groused that Schexnayder would not fully embrace the GOP agenda because he was too indebted to House Democrats and Gov. John Bel Edwards, a Democrat. But in time, Republicans in the two camps repeatedly said they had mended their differences.

The fight in recent days over Schexnayder’s response to Rep. Ray Garofalo, R-Chalmette, and his gaffe over slavery, however, has revived the fissure within the GOP during the final days of the legislative session. And the division is threatening tax reform proposals that virtually all Republicans support.

For decades, governors played off political differences between the House and Senate by allying with the leader of one chamber or the other to…

Over the past two weeks, Schexnayder resolved a simmering public drama by finally ousting Garofalo as chairman of the House Education Committee, something Democrats had demanded. Louis Gurvich, chair of the state Republican Party, blasted the speaker’s move. Stephen Waguespack, who heads the powerful Louisiana Association of Business and Industry lobby, in turn lambasted Gurvich and commended Schexnayder.

Meanwhile, the speaker negotiated with his allies in the Legislative Black Caucus, who were demanding Garofalo’s ouster, to win their support for the tax measures. That left some Republicans feeling left out, even though they favored the tax bills.

This past week, those Republicans announced the creation of the invitation-only Louisiana Conservative Caucus, composed almost entirely of legislators who supported Mack over Schexnayder.

“They’re trying through their actions to overturn an election that happened,” said Rep. Joe Stagni, R-Kenner, who is not a member. “Most of the body is happy with how the speaker has conducted his business on the House floor. He’s done a good job of representing everyone’s interest.”

The two warring Republican camps, though, say they are both singing from the same hymn book since a private Republican legislative delegation meeting Wednesday night, which gave members of the conservative caucus a chance to air their grievances with Schexnayder.

Still, the truce between the two sides could blow up any day before the session ends on June 10. And that could imperil the tax measures sought by Schexnayder, which need a supermajority of votes to pass the Legislature.

At the center of the infighting is Schexnayder, 52, a third-termer from Gonzales who didn’t graduate from college and has no outside job, according to his latest personal financial disclosure report. Schexnayder, who avoids reporters, did not respond to an interview request for this article. Schexnayder was not a major legislative player during his first two terms, but had the guile to outmaneuver other ambitious lawmakers to be elected speaker.

For context: Just about every legislator wants to be speaker, because the speaker decides who chairs each legislative committee, who sits on each committee and which bills are heard each day. But in exercising power, most speakers create enemies, and that sparks frequent rumors of overthrows, although it’s been 30 years since lawmakers staged a coup against either the speaker or the Senate president.

Garofalo, an attorney, was among 23 Republicans who joined with 35 Democrats and two independents, for a total of 60, to elect Schexnayder as speaker on Jan. 13, 2020. Mack lost but was supported by 45 Republicans. A speaker needs at least 53 votes to take the gavel.

But the alliance between the two ended after Garofalo insisted on presenting House Bill 546, which sought to address concerns of conservatives that left-wing educators are teaching “critical race theory” concepts centered on the notion that racism is systemic.

The night before, Schexnayder advised Garofalo that having his committee hear HB546 would be racially divisive.

Garofalo forged ahead. In explaining his bill, he made an offhand comment about the “good” of slavery but then immediately disavowed it.

The damage was done, however. The exchange went viral, and in the days that followed, the Black Caucus called on Schexnayder to remove him as the Education Committee chairman, while Garofalo said he didn’t think he had done anything wrong.

The speaker sought to lower political temperatures by having Garofalo stand aside as chairman and keep his mouth shut during the remainder of the session. Garofalo refused and an angry Gurvich, the party chairman, wrote two pieces for The Hayride, a right-wing website, defending Garofalo and questioning why Schexnayder wasn’t pushing Garofalo’s bill to ban critical race theory, as other states with Republican legislative majorities have done.

“An election by such an unnatural coalition composed mostly of opposition legislators was sure to eventually bear bitter fruit,” Gurvich wrote recently, lamenting that Garofalo’s bill was stalled.

Gurvich’s comments infuriated Waguespack, whose group spent heavily in 2019 to elect business-minded Republicans. That paid off in 2020 when the Legislature, with Schexnayder’s backing, passed a measure known as “tort reform” that Waguespack and other supporters said will reduce Louisiana’s high car insurance rates.

U.S. House Speaker Nancy Pelosi, a Democrat, “gets criticized for not bringing in the other side’s input, and rightfully so,” Waguespack said in an interview on WBRP-FM on May 24. “Speaker Schexnayder goes out of his way to try to bring in all sides and gets criticized here for doing exactly what they criticize Pelosi for not doing.”

Waguespack also complained that Gurvich hasn’t been out in front on the tort reform or tax reform issues.

A key piece of a complicated tax swap passed another legislative hurdle Tuesday, but the entire effort is stalled for now because of a raciall…

“The only time they step in and talk about an issue is slavery?” he said. “Are you kidding me? Give me a break. The slavery issue is a stain and should be looked at as much.”

In an interview, Gurvich said neither he nor Garofalo was defending slavery – far from it. And he added a dig at Schexnayder and Waguespack, saying their tax bills didn’t impress him.

“We’re debating a supposed revenue neutral tax bill and centralizing tax collections while the states around us are talking about eliminating income taxes,” Gurvich said. ”That’s where we need to be. This is tepid tax ‘reform.’”

Schexnayder is sponsoring House Bill 199, which would achieve a longtime business goal of centralizing state sales tax collections. He is also supporting a Senate-led effort to lower state income tax rates in exchange for eliminating a popular tax break.

Schexnayder was forced to negotiate with members of the Black Caucus after the first attempt to pass the tax swap won only 67 votes, three short of the two-thirds vote needed in the 105-member House. All 27 Black Caucus members withheld their support. He reached a deal with them the next day, May 20; the bill passed overwhelmingly and now needs final approval in both houses.

Leaders of the Louisiana Conservative Caucus announced the creation of their group on May 25. Thirty-seven of the initial 40 members supported Mack for speaker. But Rep. Jack McFarland, the group’s chairman, said its formation is not aiming to undermine Schexnayder or Rep. Blake Miguez, R-Erath, the Republican delegation leader, who was invited, belatedly, to be a member.

“We formed the group to unify and strengthen the Republican delegation and get behind our speaker,” said McFarland, R-Jonesboro. But he also said many conservatives were feeling “like they weren’t included in the conversation” and noted the group’s support is needed to pass the tax measures.

McFarland is well-liked by Democrats and Republicans for his humor and willingness to work with everyone. But many members also believe that he sees the group as a platform to become the next speaker, something McFarland denies.

Mack, R-Albany, dismissed suggestions that he hopes the group will resurrect his chances to become speaker, saying he is a member only because its leaders invited him to join.

“This is an effort for people who agree ideologically to have a sounding board where we can discuss ideas,” said Rep. Alan Seabaugh, R-Shreveport, who was the prime mover to create the group along with Rep. Larry Frieman, R-Abita Springs.

“If the group ever strays from [its core issues], we’d lose a lot of members,” said Rep. John Illg, R-Harahan.

With Republicans united in their views on abortion and guns, McFarland said he wants more attention on what he believes is an imminent “fiscal cliff,” with the sudden loss of revenues that would leave a budget hole. But that appears to be at least four years away. That’s when a 0.45-cent temporary state sales tax expires and a federal tax cut also expires that, under current law, would have the effect of reducing state revenue.

Despite their stated concerns about spending, McFarland and all other conservatives were part of the unanimous vote on May 27 to approve House Bill 1, the budget for the fiscal year that begins July 1.

Rep. Ted James, who chairs the Black Caucus, said the creation of the conservative caucus, and Gurvich’s criticism of Schexnayder, reflects some Republicans’ continuing unhappiness that the speaker doled out five committee chairmanships to Democrats and regularly consults with them.

“They want us to be like [polarized] Washington,” James said. “But there are enough Republican legislators who recognize the benefit of us working together.”

The executive director of the Louisiana Republican Party submitted her resignation this week, ending a nine-month stint running the party.