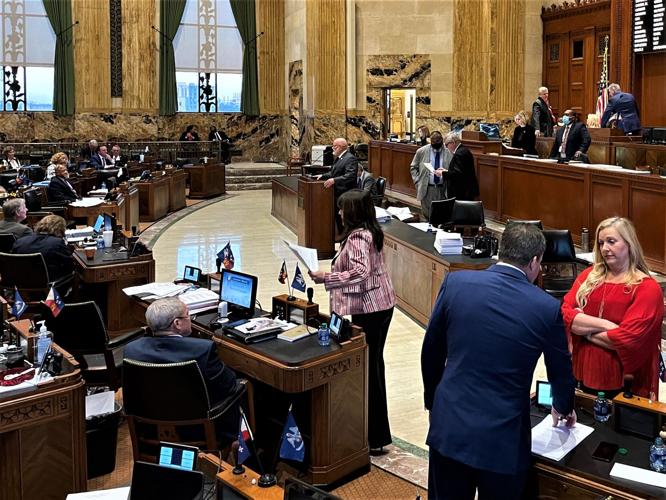 State Rep. Danny McCormick, R-Oil City, took a rare trip to the podium on Monday, Feb. 14, 2022, to object to an amendment that would turn his House District 1 into a majority Black district. The amendment failed, 31-71. But the legislation, which did not add new minority-majority seats in the 105-member House, was approved on a vote of 82-21. 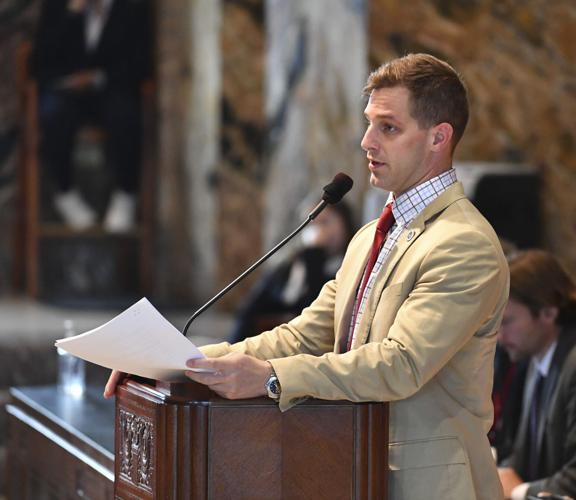 State Rep. Danny McCormick, R-Oil City, took a rare trip to the podium on Monday, Feb. 14, 2022, to object to an amendment that would turn his House District 1 into a majority Black district. The amendment failed, 31-71. But the legislation, which did not add new minority-majority seats in the 105-member House, was approved on a vote of 82-21.

The Republican-controlled state House and Senate took a major step Monday toward approving new legislative maps that would solidify the huge GOP advantage in each chamber for the next decade.

On a 27-12 vote, the Senate passed a plan that would establish the 39 state Senate district boundaries for next year’s legislative elections, while the House approved a new map for the 105 House districts on an 82-21 vote.

Each plan still needs to be passed by the other chamber before the three-week redistricting session ends no later than Sunday. But final passage seems assured for both measures since the House and Senate traditionally make nothing more than minor changes to maps for the other chamber.

The biggest uncertainty in the coming days is whether Gov. John Bel Edwards, a Democrat, will veto either measure. He has 20 days after receiving the bills to make that decision.

Gov. John Bel Edwards won a legislative showdown last year when he persuaded just enough House members to side with him over the Republican sp…

The new Senate boundaries are embodied in Senate Bill 1, while the House lines are contained in House Bill 14.

After next year’s legislative elections, Republicans are expected to maintain their two-thirds advantage in the Senate and might reach that goal in the House. That threshold is important because certain votes – especially on tax bills – require a two-thirds majority.

One major goal was to protect incumbents. Stefanski and Cortez have repeatedly said they met with all of their colleagues, Democrats and Republicans alike, and tried to draw new boundaries for them.

“I have to rely on you to tell me what’s best for your district,” Stefanski told the House on Monday.

Only two lawmakers who can run for re-election have condemned the proposed new shape of their districts that would take effect for next year’s elections. They are Sen. Gary Carter, D-New Orleans, and Rep. Roy Daryl Adams, a political independent from Jackson.

How do you eliminate potential political opponents? One state rep tried to move them out of her new district

State Rep. Polly Thomas has clout in the Legislature as the only Jefferson Parish Republican on the House committee that is redrawing election…

Cortez and Stefanski have also tried to lock in the Republican numerical advantage, which they have shown by turning aside efforts by Democrats to elect more of their members.

The Senate map appears likely to give Republicans a 28-11 advantage, compared to 27-12 under the current lineup. Analysts expect the seat of Sen. Gary Smith, D-Norco, who is term-limited, to flip to the Republican Party. Rep. Greg Miller, R-Norco, has expressed an interest in running for the seat.

Republicans currently hold 68 seats in the House compared to 34 for Democrats and three without party affiliation. Republicans hope the new districts will give them at least 70 votes, the two-thirds threshold.

The Republican plan would move one House district from north Louisiana to New Orleans to offset population losses in the north and gains in the south. It is designed to remain in Democratic hands.

Rep. Kenny Cox, D-Natchitoches, represents that district today, and on Monday he decried the plan.

“This has been a very difficult time for me,” said Cox, who became a sacrificial lamb because he is term-limited, in a further reflection of the effort to shelter incumbents.

Cox spent several minutes questioning the decision to shift his district, noting that he grew up poor in Coushatta and served this country for more than two decades in the U.S. Army.

But Cox finished up by withdrawing his amendment without a vote.

The population and the census dictated the move of his district, Stefanski said.

Republican plan to remap the state House advances. It would shift a district to New Orleans

Democrats sought to shift a district held by Rep. Alan Seabaugh, a term-limited Republican from Shreveport. But that plan would create a new Democrat seat, so Republicans rejected it last week.

Republicans defeated attempts on Monday by Rep. Cedric Glover, D-Shreveport, to redraw the lines in northwest Louisiana to dilute the Black and White majorities in each district.

Glover won no more than 32 votes for his amendments after a parade of Republicans spoke against them.

In redrawing the legislative boundaries, Cortez and Stefanski also have had to pay close attention to the 1965 Voting Rights Act, which prohibits Louisiana from reducing the number of Black representatives.

The Senate plan would maintain 11 Black-majority districts, while the House plan would keep 29.

Rep. Denise Marcelle and Sen. Ed Price, both of whom are Black, said those numbers should increase since Louisiana has more Black residents compared to 10 years ago and fewer White people. Marcelle and Price said both plans underrepresent the 33% Black population in Louisiana.

Rep. Edmond Jordan, D-Baton Rouge, said HB14 represents no progress because the state House had 29 Black lawmakers in 1876, when post-Civil War Reconstruction laws permitted the election of Black candidates for a brief period.

“I think it is fair and legal and represents Louisiana,” Stefanski said of HB14.

The Legislature’s breakdown helps explain the focus on race during the redistricting session.

Sen. Jay Luneau, D-Alexandria, is the only White person who represents one of the 11 Black-majority Senate seats.

The lone party crossovers on SB1 were Sens. Regina Barrow, D-Baton Rouge, who voted for the bill, and Barrow Peacock, R-Shreveport, who voted no.

After the vote Barrow said she wanted to vote "no" on the bill, which would make the tally 26-13.

She said her "yes" vote was a mistake.

Peacock’s vote was not a surprise because the Senate bill moves his district to the Northshore because of the population shifts. Peacock’s district was targeted because he cannot seek another term in the Senate.

This Black Democrat voted for Republicans' redistricting plan. His party put him in the hot seat.