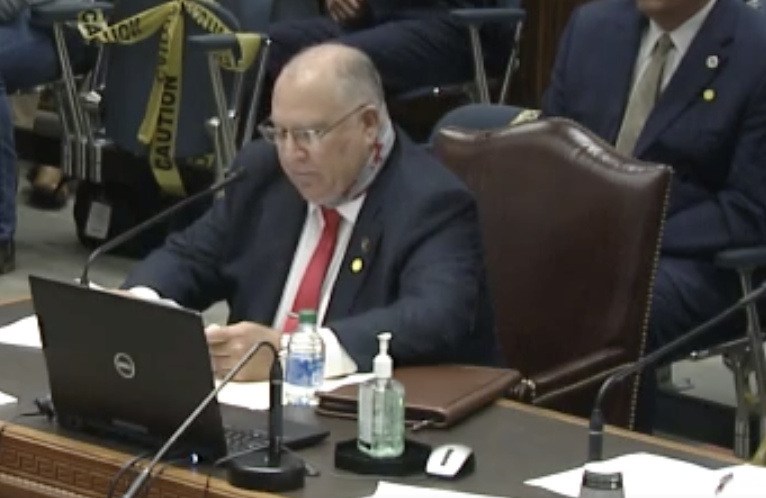 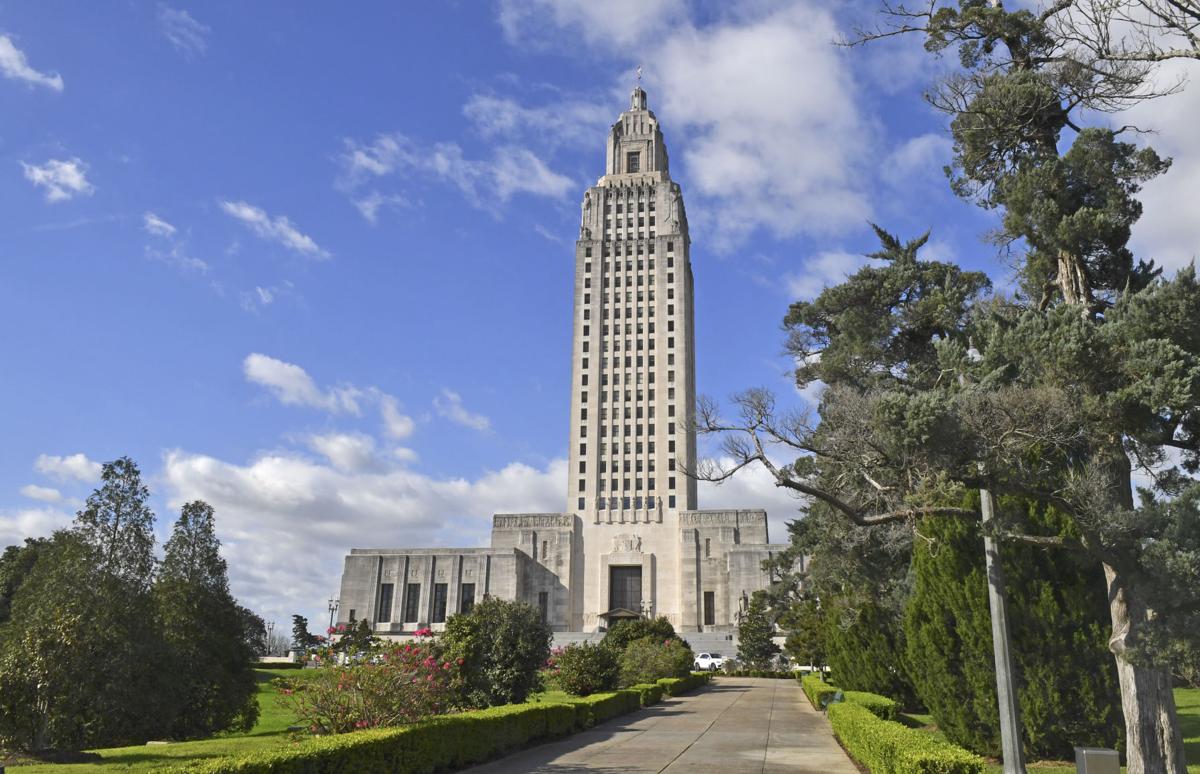 The Louisiana State Capitol stands tall under blue skies in March. The state's recovery from a coronavirus-induced recession — worsened by low oil prices — might linger until the end of 2021, which is slower than the national average, a report forecasts. 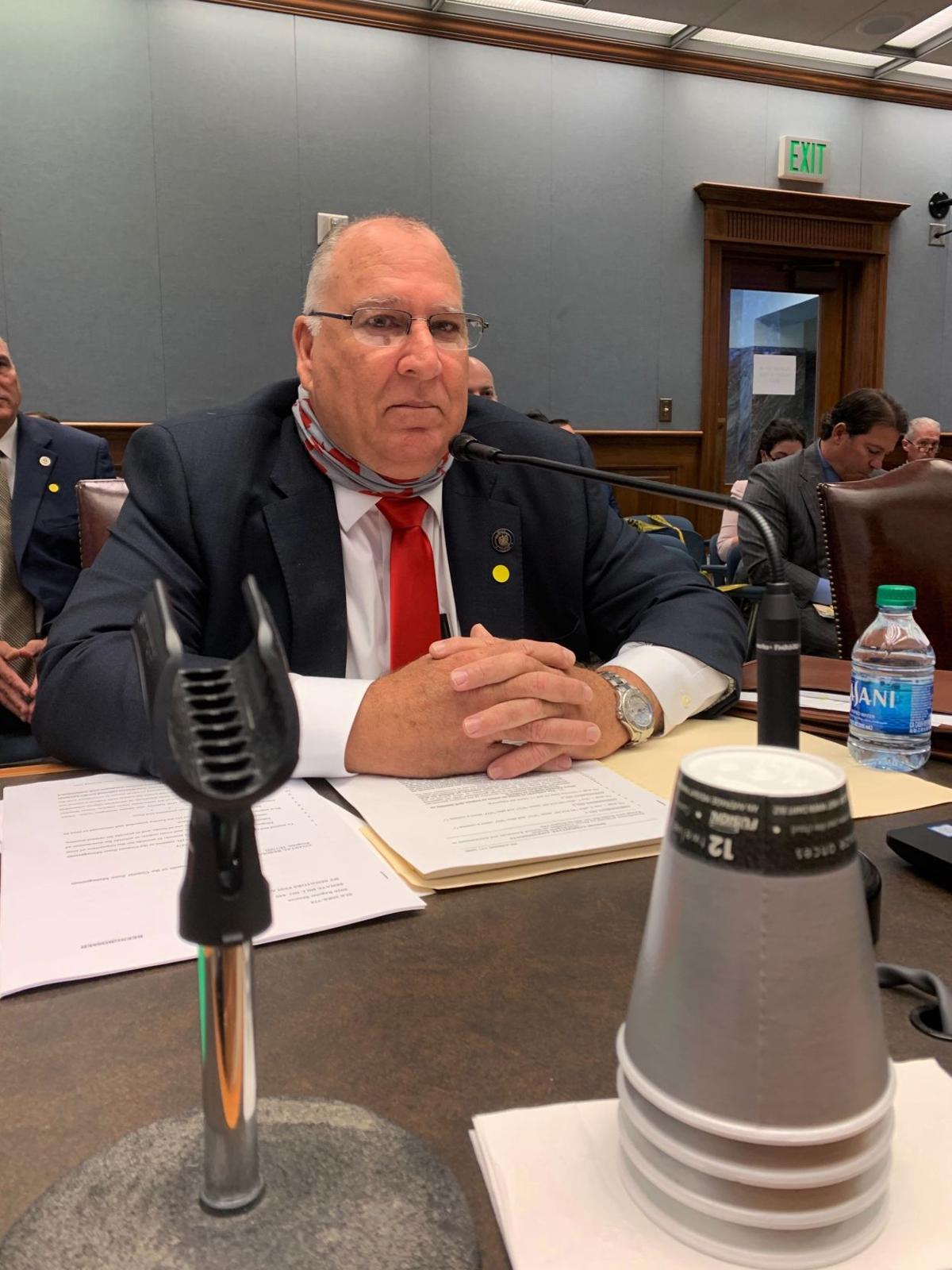 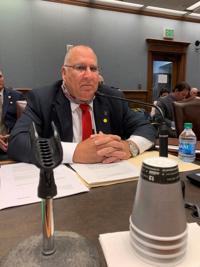 State Sen. Big Mike Fesi, R-Houma, presented legislation to a House committee Wednesday, May 27, 2020, that would retroactively dismiss environmental lawsuits parishes have filed against oil and gas companies over damages to the state's wetlands.

The Louisiana State Capitol stands tall under blue skies in March. The state's recovery from a coronavirus-induced recession — worsened by low oil prices — might linger until the end of 2021, which is slower than the national average, a report forecasts.

State Sen. Big Mike Fesi, R-Houma, presented legislation to a House committee Wednesday, May 27, 2020, that would retroactively dismiss environmental lawsuits parishes have filed against oil and gas companies over damages to the state's wetlands.

Oil and gas companies won another round in the Louisiana Legislature on Wednesday when a House committee approved a measure that would kill lawsuits filed by seven coastal parishes against the companies over the loss of wetlands and marshes.

The 9-3 vote by the Natural Resources Committee advances Senate Bill 440 to the full House. Its chances of winning passage there appear solid since most Republicans favor it, and the GOP has almost two-thirds of the seats in the House.

But SB440 still faces a complicated path to become law. It will encounter a tough battle in the Senate where it must win approval again after being amended by the House Committee, and then it faces opposition from Gov. John Bel Edwards, who can veto SB440 if it wins Senate passage.

Wednesday’s committee hearing was the fourth step in the legislative process for the effort to retroactively nullify the parish lawsuits, the main priority of Louisiana’s oil and gas lobbyists this year.

It began as Senate Bill 359 by state Sen. Bob Hensgens, R-Abbeville. It included specific language to invalidate the parish lawsuits.

But Hensgens’ bill stalled before the full Senate on May 20. Oil and gas supporters instead pushed SB440 through the Senate. It included complicated legal language that opponents said served as a backdoor attempt to kill the parish lawsuits. SB440 passed the Senate, 20-15, the bare minimum needed for passage. The House Natural Resources Committee was the next step.

Taking the lead in pushing SB440 on Wednesday was its sponsor, state Sen. Mike Fesi, R-Houma. Backing him were the two main lobbyists for oil and gas companies – Gifford Briggs, president of the Louisiana Oil and Gas Association, and Tyler Gray, president and general counsel of the Louisiana Mid-Continent Oil and Gas Association – as well as Archie Chaisson, the president of Lafourche Parish.

“The oil and gas industry is in dire need of a shot in the arm,” Briggs said, adding that invalidating the lawsuits would give companies the “predictability” they need to boost investments in Louisiana.

Opposing SB440 were John Carmouche, the lead attorney at the Baton Rouge-based Talbot Carmouche Marcello law firm, and Jefferson Parish President Cynthia Lee Sheng and St. Bernard Parish President Guy McInnis. Carmouche is representing Jefferson and St. Bernard in their lawsuits against oil and gas companies, along with those filed by Cameron, St. John the Baptist, Vermilion and Plaquemines parishes. The Jones Swanson firm is representing Orleans Parish, the other parish that has filed suit.

Fesi repeatedly told the committee members that SB440 was needed to ensure that any money from a settlement with oil and gas companies would go to the state’s Coastal Protection Restoration Authority to ensure that the money is spent wisely.

“My bill is to set up where the money is spent,” Fesi said at one point. “It has nothing to do with the lawsuits.”

Why oil and gas supporters have taken such an interest in how the state would spend any settlement money was not clear since their lobbyists want to kill not only the lawsuits but also the one settlement reached by the Carmouche law firm, in which Freeport McMoRan has tentatively agreed to give $100 million over 20 years to up to 12 coastal parishes.

“Now when we have a settlement, this legislation comes up,” Lee Sheng said. “It’s disheartening. It’s a punch in the stomach.”

Louisiana Legislature has twice overridden a governor's veto, but it could happen again soon

She also questioned why legislators were spending so much time on a measure that had nothing to do with COVID-19, noting that she and Jefferson Parish council members had decided not to consider any controversial issues while they grapple with the pandemic. So far, 438 Jefferson Parish residents have died from the disease.

“This is a waste of our time,” added Guy McInnis, St. Bernard’s parish president. “If you don’t want to get sued, don’t pollute.”

While Fesi portrayed SB440 as simply a way to spend any settlement money, he supported an amendment that added language from SB359 that would prevent parish government officials from suing the oil and gas companies to restore the coast.

“Enforcement is the sole responsibility of the state,” state Rep. Phillip DeVillier, R-Eunice, said in offering the amendment, arguing that only the state could sue the oil and gas companies.

Carmouche said the state does not have the money to pay legal fees for the lawsuit. He said his firm has covered the costs for parish governments, spending $9 million on just two of its 42 lawsuits. Based on those figures and the $40 million cost for the state in the BP case, the Department of Natural Resources estimates that it would cost the state at least $4.2 million per case to pay lawyers and expert witnesses.

Carmouche said he has met privately with a number of oil and gas companies that are close to settling the parish lawsuits.

“Don’t take that opportunity away from Louisiana,” he told committee members minutes before they rejected his argument in the 9-3 vote.

“Lawsuits are not generating any value in benefiting the coast,” Hewitt said.

State Rep. Mandie Landry, D-New Orleans, countered that the benefits haven’t been seen because oil and gas companies have tied the parish lawsuits up in court for years and that the parishes will ultimately receive money from a settlement or a legal judgment.

'We ran out of time': Bill to nullify Louisiana parish lawsuits vs. oil and gas companies is dead