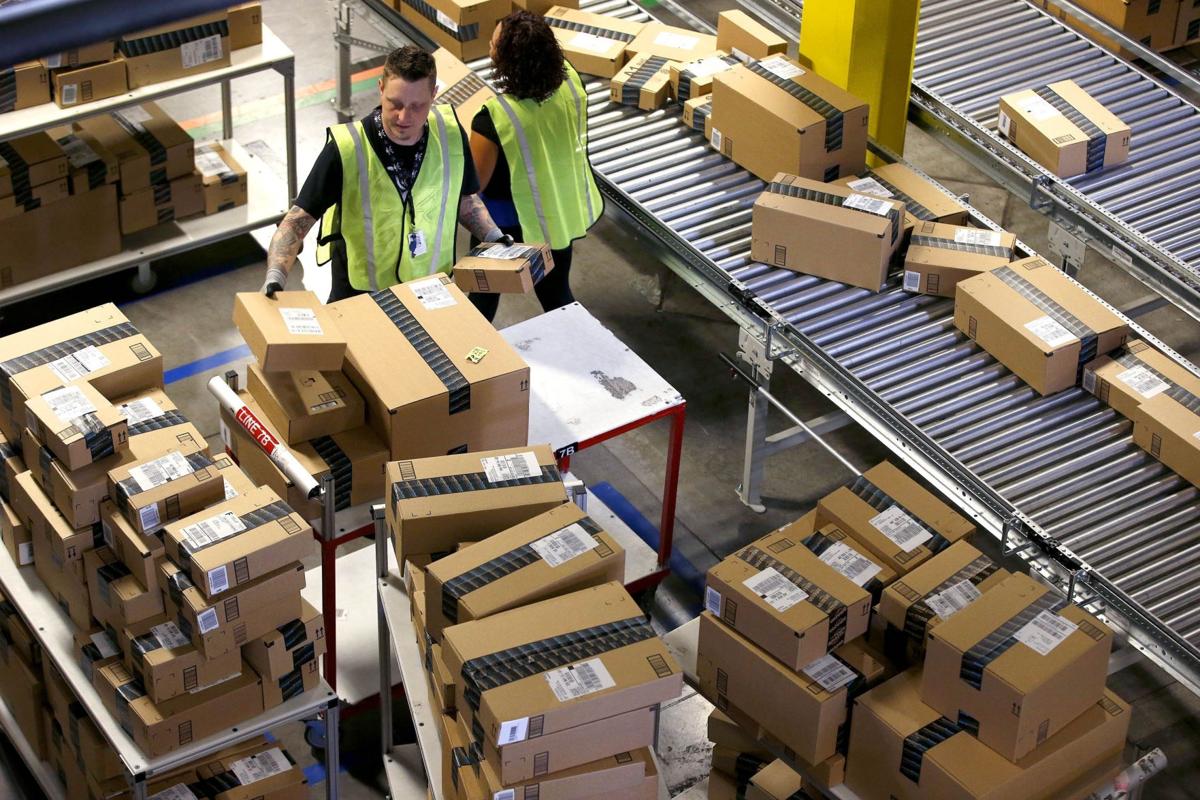 FILE - In this Dec. 2, 2013 file photo, Amazon.com employees organize outbound packages at an Amazon.com Fulfillment Center on "Cyber Monday" the busiest online shopping day of the holiday season, in Phoenix. Buying things online could soon get pricier for many people after the U.S. Supreme Court's decision Monday, Dec. 12, 2016 not to get involved in a case that may lead to states collecting billions in lost sales taxes. The court opted not to hear a challenge to a Colorado law requiring internet retailers to notify customers and the state how much they owe in Colorado taxes. (AP Photo/Ross D. Franklin, file) 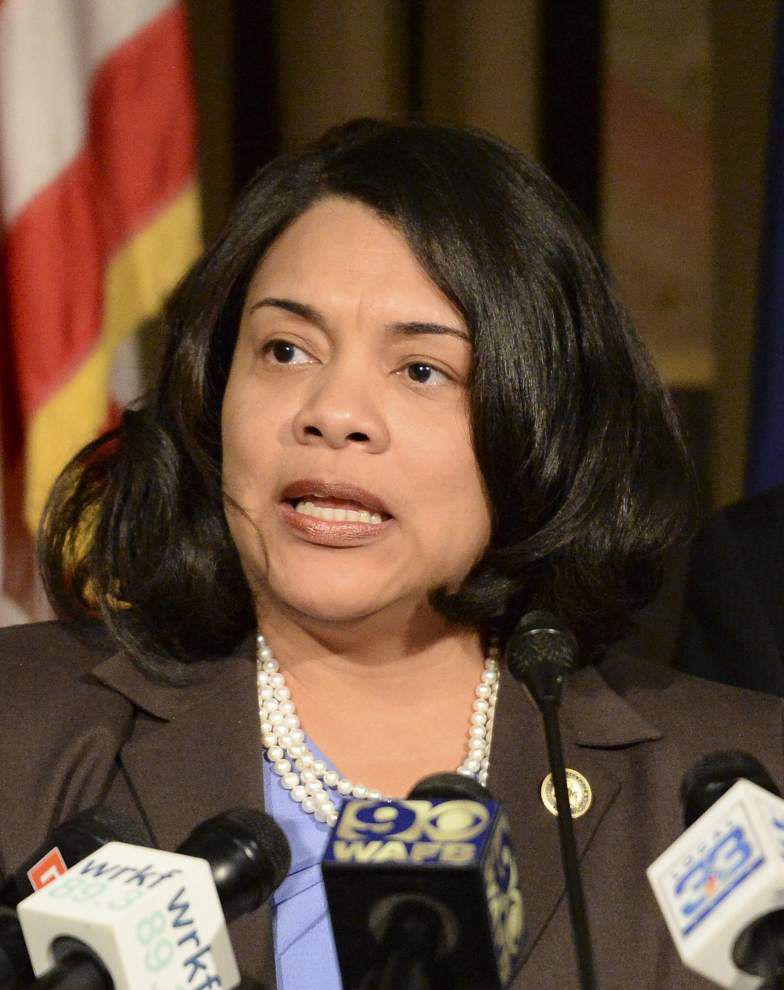 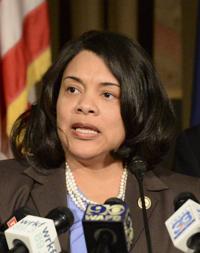 FILE - In this Dec. 2, 2013 file photo, Amazon.com employees organize outbound packages at an Amazon.com Fulfillment Center on "Cyber Monday" the busiest online shopping day of the holiday season, in Phoenix. Buying things online could soon get pricier for many people after the U.S. Supreme Court's decision Monday, Dec. 12, 2016 not to get involved in a case that may lead to states collecting billions in lost sales taxes. The court opted not to hear a challenge to a Colorado law requiring internet retailers to notify customers and the state how much they owe in Colorado taxes. (AP Photo/Ross D. Franklin, file)

Amazon.com, the giant online retailer, will begin charging Louisiana customers sales taxes on Jan. 1, the head of the Department of Revenue said Tuesday.

Revenue Secretary Kimberly Robinson said in an interview her department hasn’t calculated how much money would be raised from charging taxes on sales over the Internet, but estimated that tens of millions of dollars could be added to Louisiana’s often depleted coffers.

“This isn’t going to fill the deficit, but it is going to help,” said Robinson, who has been meeting with business leaders around the state to lobby for an overhaul of a fiscal system that year after year fails to come up with enough revenues. The state needs to find another $300 million to pay the bills due for the fiscal year that began July 1.

Amazon will charge sales taxes based on where the merchandise is shipped, if it is one of the states where the company collects the levies. For purchases sent to Louisiana addresses, Amazon will collect and send to the Revenue Department the state sales tax, now 5-cents on the dollar, and the appropriate local tax to local authorities, Robinson said.

The average combined state and local sales tax in Louisiana is 9.6 percent. Not charging the sales taxes that retail stores must, is like receiving a 10 percent discount for online purchases for many Louisiana consumers.

Since 1992, federal law allows states to collect sales taxes on online purchases only if the seller has a physical location within the state’s border. Congress has balked at changing the law nationally saying it’s a backdoor way to raise taxes and help large corporations at the expense of online start-ups.

Customers are supposed to self-report their online purchases and pay up.

“It doesn’t happen very often,” Robinson said. “This takes the burden off the consumer to have to report the purchases, fill out the paperwork and pay the taxes.”

The public relations department of the Seattle-based Amazon.com did not respond to requests for comment made over a two-day period

Amazon sells all manner of goods and services online. According industry figures, Amazon had more than $107 billion in net sales in 2015 and is doing substantially better this year.

The dominance of Amazon and other online retailers cause angst among local and parish governments that are seeing their sales tax collections taper off, said Robert Travis Scott, president of the Public Affairs Research Council of Louisiana and a member of the Task Force on Structural Changes in Budget & Tax Policy, whose plan for revamping how Louisiana collects and spends tax dollars will be at the center of the next legislative session beginning in April.

Sales taxes are a key source of revenues that pay for police and fire protection, infrastructure repair, economic development projects, and other services, said Karen Day White, assistant director of governmental affairs for the Louisiana Municipal Association, which represents mayors, aldermen and city councilmen at the State Capitol.

By not collecting sales taxes, companies such as Amazon had a perceived price advantage over local stores, said Jessica Elliott, director of governmental affairs for the Louisiana Retailers Association, representing more than 4,000 storefronts in the state. “We’re really pleased because it puts brick-and-mortar stores on the same level as online retailers.”

Elliott said Amazon’s decision to collect sales taxes came after “a couple of different bills” were passed by the Louisiana Legislature earlier this year.

The first measure, Act 22 passed during the first special session of the year, provided for the collection of sales and use taxes from companies that didn’t have a physical presence in Louisiana. The second bill, passed during the regular session, set notification and reporting requirements for sales made in the state by remote retailers.

More specifically, Secretary Robinson said, it was a court decision last week that upheld the new law that requires Amazon and other online retailers to send the names of Louisiana customers and their purchases to state government. Act 569 was modeled on a measure approved by Colorado.

The U.S. Supreme Court on Dec. 12 let stand the Colorado law. Colorado – a state without about 1 million more people than Louisiana but charges a 2.9 cent state sales tax – annually loses an estimated $172.7 million, according to a court brief.

“Some of the companies are probably looking at that decision and saying, ‘Well, the statute has been upheld. It’s going to be effective in Louisiana too, maybe we want to consider and collect the tax as opposed to having to send our customer information to the Department of Revenue’,” Robinson said.

Tim Boone of The Advocate business desk contributed to this report.

Our Views: Why sales tax for Amazon.com will level the Louisiana playing field

The playing field for Louisiana retailers is going to get a bit fairer, as Internet sales giant Amazon.com will begin charging state and local…

Spending in East Baton Rouge remained high in early 2017, although there are signs post-flood activity has begun to abate.