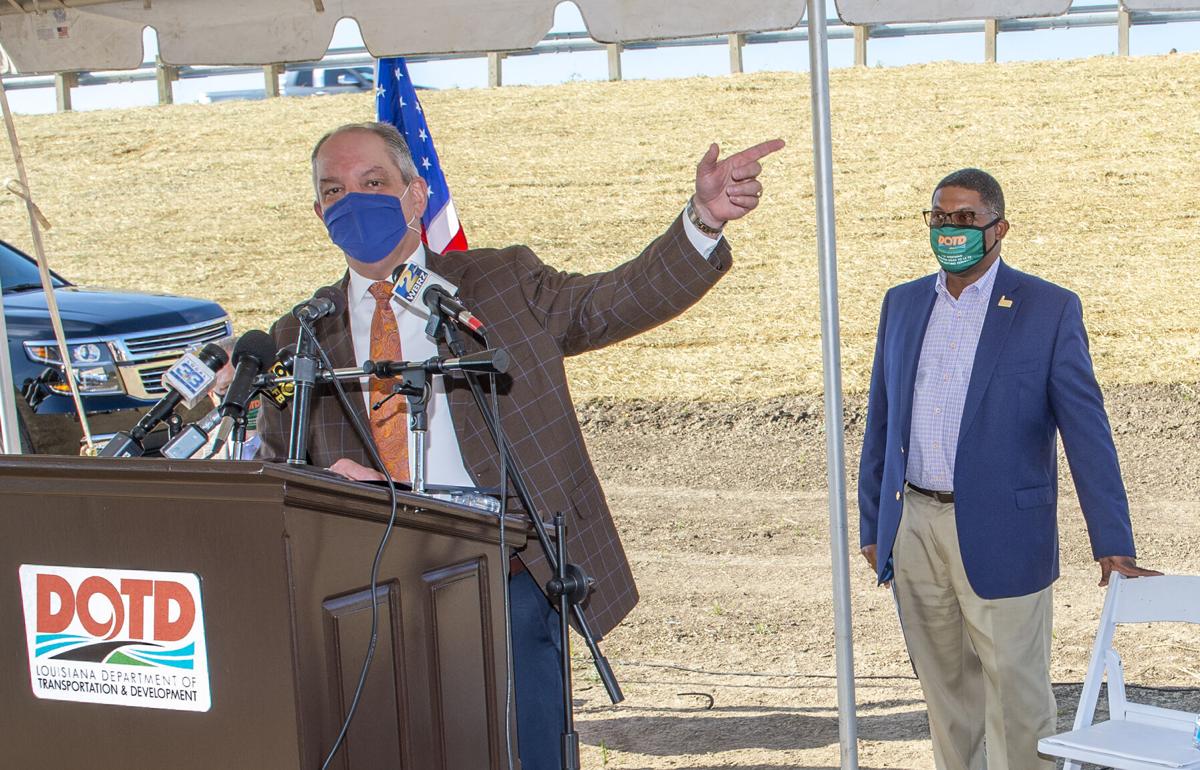 As DOTD Secretary Shawn Wilson, right, watches, Gov. John Bel Edwards, left, speaks at a ceremony announcing the opening of a wider I-10 between Highland Road and La. 73 -- a new lane in each direction with a $72 million price tag for the project Monday Oct. 26, 2020, in Baton Rouge, La. 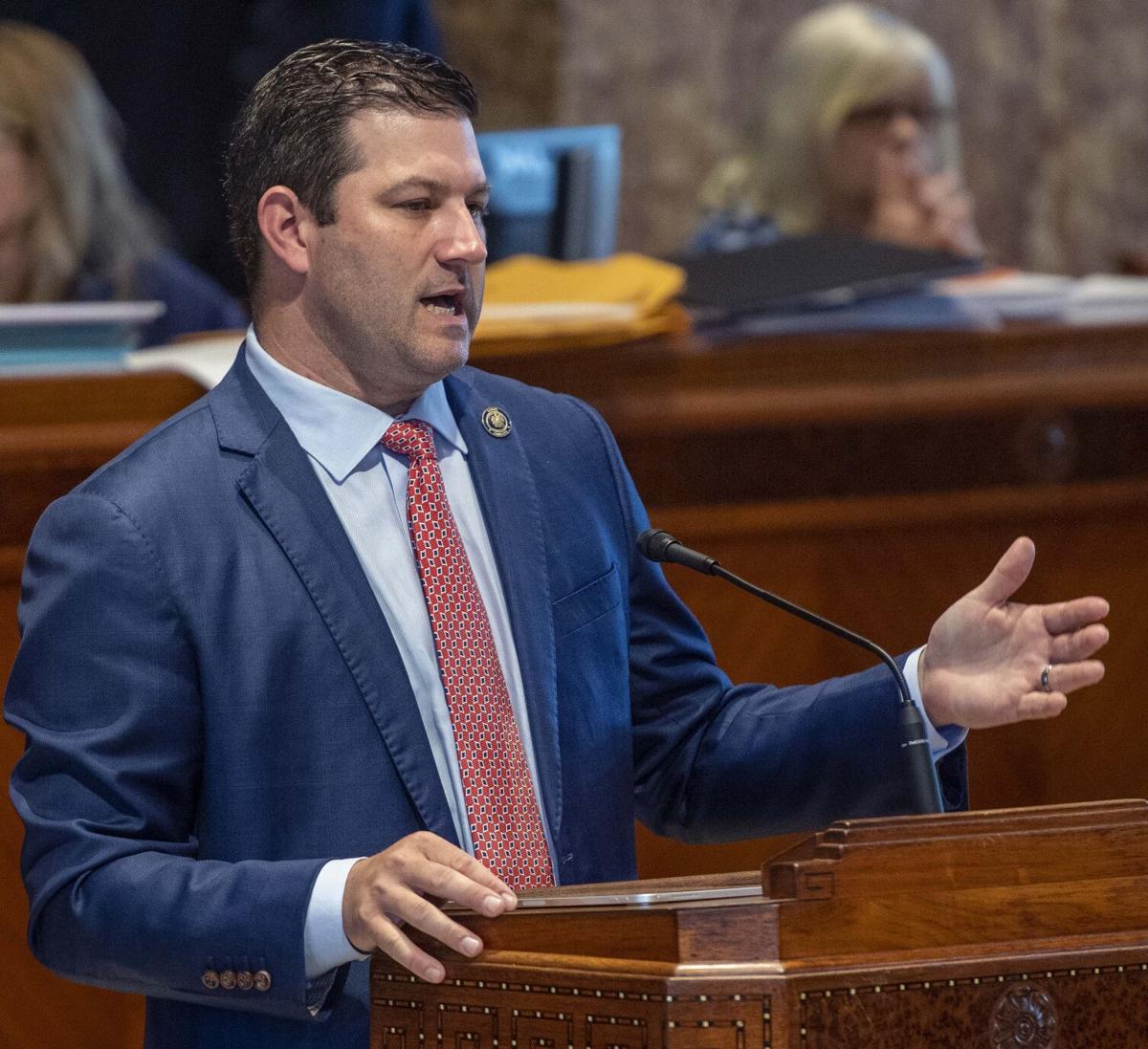 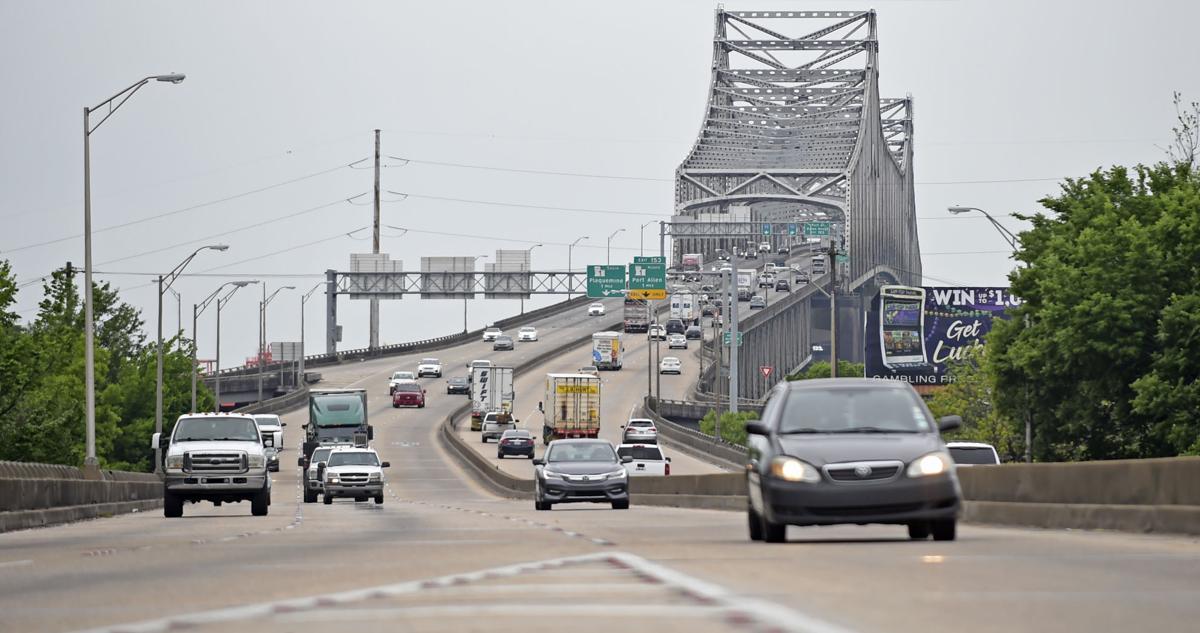 Traffic is light on the Interstate 10 bridge during rush hour, Thursday, April 2, 2020, as drivers conducting essential business navigate the roadway as others stay off the road following Governor John Bel Edwards' shelter at home order due to coronavirus.

As DOTD Secretary Shawn Wilson, right, watches, Gov. John Bel Edwards, left, speaks at a ceremony announcing the opening of a wider I-10 between Highland Road and La. 73 -- a new lane in each direction with a $72 million price tag for the project Monday Oct. 26, 2020, in Baton Rouge, La.

Traffic is light on the Interstate 10 bridge during rush hour, Thursday, April 2, 2020, as drivers conducting essential business navigate the roadway as others stay off the road following Governor John Bel Edwards' shelter at home order due to coronavirus.

In something of a surprise, Gov. John Bel Edwards on Friday signed the biggest transportation bill in 37 years when he endorsed a measure that would gradually boost state aid for roads and bridges by $300 million per year.

The measure, House Bill 514, won lopsided approval in the final minutes of the 2021 regular legislative session after days of behind-the-scenes negotiations.

House Speaker Pro Tem Tanner Magee, R-Houma, said he was notified Friday morning the governor signed his bill, which started as a tax on medical marijuana but was transformed in the waning days of session into a sweeping infrastructure bill. The governor confirmed he signed the measure.

Backers called the legislation a historic breakthrough, and they noted it would be the biggest state investment in transportation since 1984.

How might Louisiana fix road, bridge problems? This bill is believed to be the solution

While major hurdles loom, Senate leaders are behind a late-session push that backers say would go a long way toward solving Louisiana's longst…

They also said it would pave the way for construction of a new, $1 billion plus bridge across the Mississippi River in Baton Rouge and other major projects in New Orleans and elsewhere.

“This substantial investment in our infrastructure will go a long way toward alleviating our traffic woes, upgrading bridges in ill-repair, and is a significant next step in bringing a new Mississippi River Bridge and connectors to the Capital Region," Adam Knapp, president and CEO of the Baton Rouge Area Chamber said in a statement. "Additionally, right-sizing our infrastructure funding will allow the state to access matching funds from the federal government, an important component in making major priorities like a new bridge possible.”

Edwards had reservations throughout the debate, and he never got behind the measure publicly despite a series of private meetings with the sponsors of the bill – Sen. Rick Ward III, R-Port Allen, Magee and other legislative leaders.

Relief for Mississippi River bridge traffic? A look inside the push for a short-term fix

In his post session press conference, Edwards said while he is a longtime supporter of road and bridge improvements, he was also worried that the measure could lead to state budget problems.

Advocates went back and forth in recent days on whether the governor would sign the bill. The fact Edwards' signing of the bill did not include any accompanying comments on the measure was another indication of the ambiguity surrounding the measure.

Shawn Wilson, secretary for the state Department of Transportation and Development, said Friday the bill stems from talks with lawmakers on coming up with a workable plan.

"This is the accumulation of many years of effort to fund infrastructure," Wilson said. "We believe that no bill is going to be perfect. That's the case in this one. But the additional revenue will make an absolute difference."

The $300 million is equivalent to a hike of 10 cents per gallon in the state gas tax.

An earlier bid by Wilson and others to win legislative support for a gas tax increase failed to gain traction.

Ward, who is chairman of the Senate Transportation Committee, hailed the signing.

"Infrastructure investment is fundamental to continued economic growth for our state," Ward said in a text message. "This will have a lasting impact that will positively affect all aspects of the people of the state."

The bill would increase funding for roads and bridges by gradually moving 60% of sales tax revenue collected on the sale of cars and trucks from Louisiana's general fund.

The governor noted that the transfer, combined with the 2025 expiration of a 0.045% sales tax that generates $500 million per year, could cause a funding shortage for state services of $800 million.

The Legislature approved a sweeping bill Thursday that would gradually boost state aid for roads and bridges by about $300 million per year, w…

Instead, Edwards signed the bill ahead of what is expected to be a historic session by the Legislature to try to override his vetoes of other controversial bills, especially a proposal to bar transgender athletes from competing in girls' and women's sports.

"Gov. Edwards has just written a new Mississippi River Bridge into law," Kirkpatrick said in a statement. "With the funding secured, we can now focus on selecting the location and building the bridge as soon as possible."

The override session, if it happens, would be the first of its kind.

The roads bill could have been the target of another override attempt, if Edwards had opted to scuttle it.

Magee said Edwards was boxed in on the roads bill, which is likely the only House bill that would prompt an override attempt. The transgender bill and another to allow permitless carry of guns are Senate bills. Magee noted some Democrats who represent areas west of Baton Rouge might have been compelled to override his veto of the roads bill given its implications on a new Mississippi River bridge.

If lawmakers do agree to a veto session, they will return to Baton Rouge July 20 for up to five days, with Republicans eyeing an override of the transgender bill, which has stirred up a passionate debate.

"I think it’s kind of obvious where the game is gonna be," Magee said. "Some of these rural Democrats whose districts overwhelmingly support these bills, will they stick with the governor?”

Ward and others have said for weeks that they added provisions to the roads and bridges bill to prevent any future budget messes.

Under the measure, the transfer of sales tax revenue to the state's key transportation fund would be limited to $150 million per year in case of a dire financial outlook.

The bill also says a maximum of $150 million of the transfer per year could be tied up in bonds and other borrowing costs, another step aimed at heading off future state budget problems.

Gov. John Bel Edwards announced Friday he vetoed 28 bills, signed into law 477 others, and he is now done with the 2021 Regular Session of the…