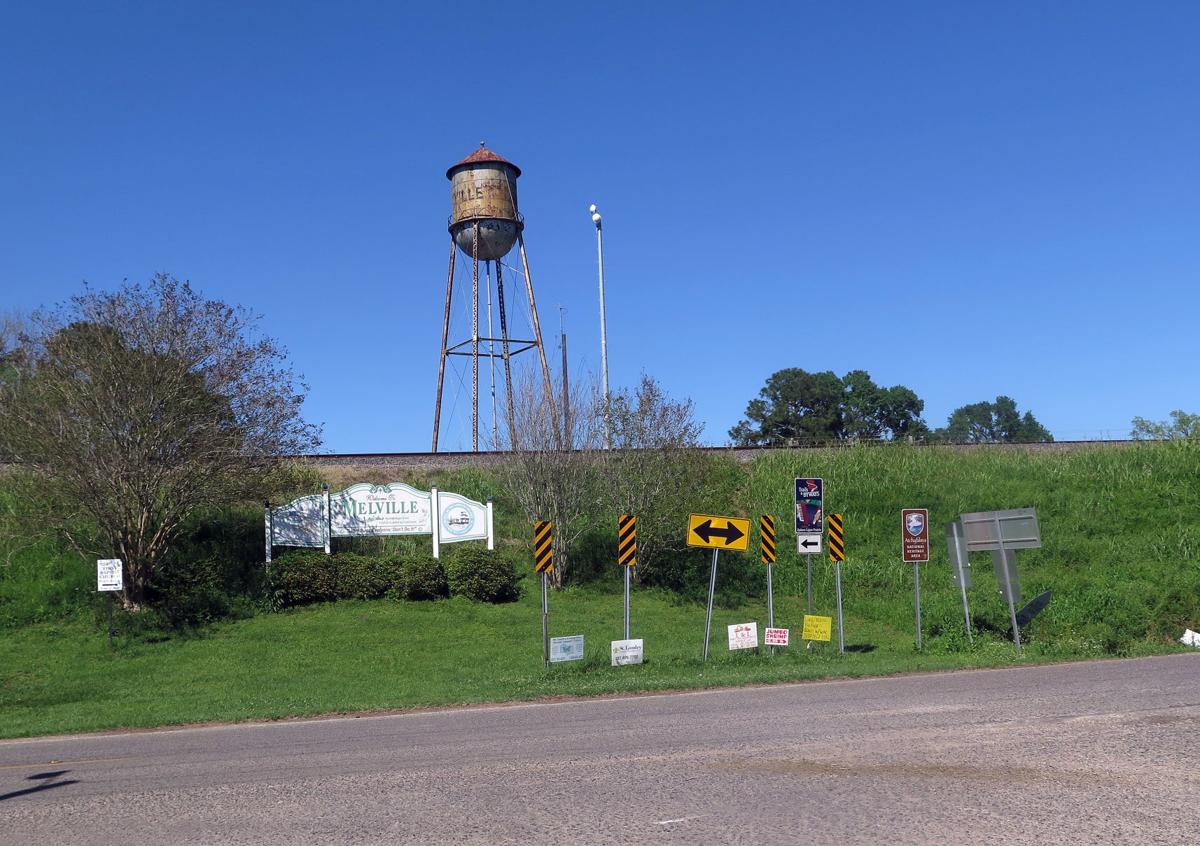 Melville needs to replace its 60-year-old drinking water system. But like many other small Louisiana communities, Melville can't afford to maintain, much less improve, the aging system that delivers drinking water. 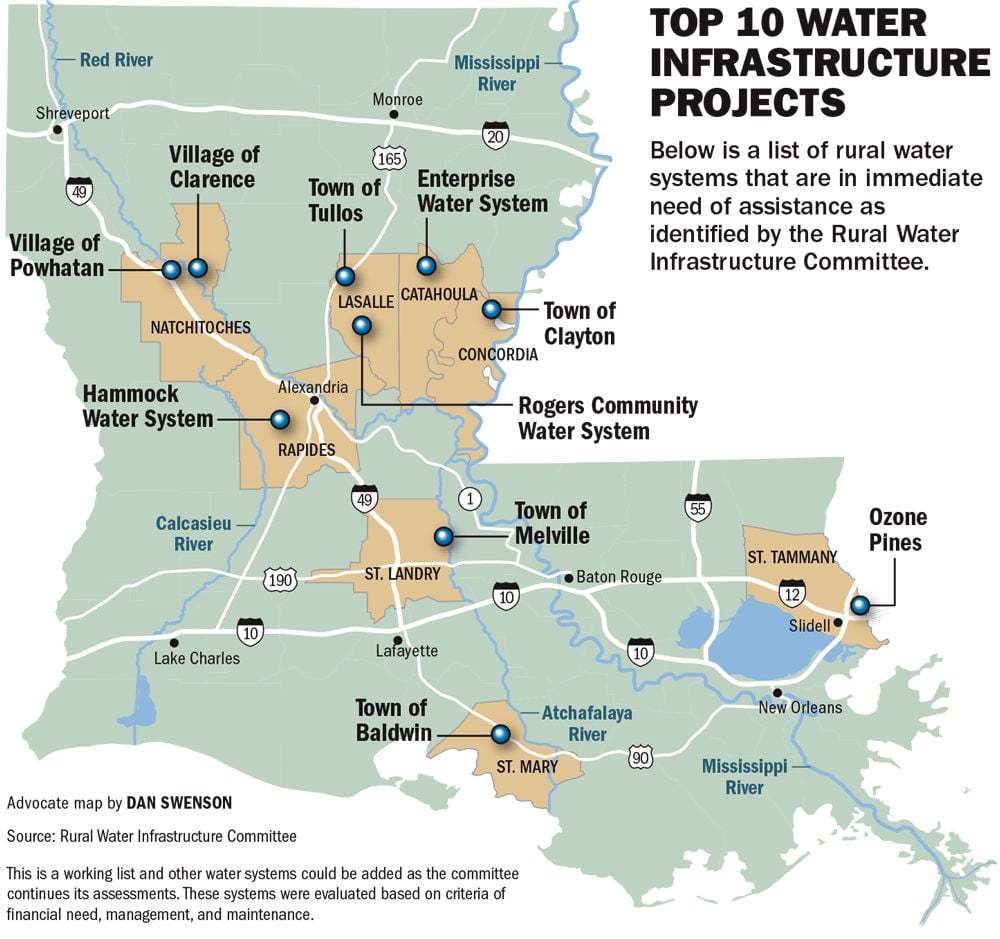 Melville needs to replace its 60-year-old drinking water system. But like many other small Louisiana communities, Melville can't afford to maintain, much less improve, the aging system that delivers drinking water.

After almost a year of trying to ward off a drinking water disaster, the governor’s emergency response team is now looking for help from the Louisiana Legislature.

The state Rural Water Infrastructure Committee began swooping in to assist troubled communities back in March. What they discovered is that the state’s drinking water dysfunction goes beyond rickety pipes and pumps. The responses need to be more widespread, and for that, the panel needs some laws to change.

“We need to concentrate on our legislative efforts,” said Leslie Durham, who chairs the Rural Water Infrastructure Committee. Gov. John Bel Edwards formed the RWIC in March hoping to avoid a repeat of a health emergency like the one in the northeast Louisiana town of St. Joseph, which required about $10 million to immediately repair infrastructure that had started leaching lead into the drinking water.

RWIC members come from different state and federal agencies that hadn’t really coordinated before. Their job is less about coming to save the day and more about guiding locals through a patchwork of grants, loans and technical assistance to repair old and neglected pipes and pumps whose inconsistent pressure defeats chemicals aimed at keeping the drinking water safe.

Fifty-eight percent of the state’s public systems are a half-century old or older — far beyond their intended life span — and have been poorly maintained, if at all. But the RWIC focused much of their initial work on the 10 worst systems.

The governor’s office, government bureaucrats and Durham prefer “most distressed” to worst. They are trying to tamp down the air of crisis surrounding a Louisiana drinking water infrastructure that the American Society of Civil Engineers graded at D-minus and the U.S. Environmental Protection Agency estimated in 2011 would cost taxpayers about $5.3 billion to fix.

Louisiana communities other than the 10 worst have similar financial needs, lack of adequate management and poor maintenance — they will be on the RWIC list eventually — but these 10 are closest to crisis. After almost a year of work, they are still the worst.

Out of the hundreds of Louisiana’s dysfunctional drinking water systems, the governor’s kitchen cabinet has found the 10 worst on which they p…

RWIC brought in engineers and identified loans for most, according to a memo updating the work the panel has done. They suggested rate increases for half of the 10 worst; recommended the state take over two of the communities and found four others needed to consolidate with larger systems.

But the real lesson, Durham said, was recognizing the various legal, political, technical and financial hurdles that can only be addressed by changing some of the state’s laws.

Durham drove Jan. 24 to Baton Rouge from her Delta Regional Authority office in St. Joseph to speak with RWIC members and citizen activists about possible bills that could be drafted and passed during the legislative session that begins in April. They’re looking at a wide spectrum of alternatives from paying fiscal administrators to making it easier for the state to take control of the finances of troubled municipalities to consolidating water systems.

In the meantime, the state also is trying to get a handle on the size of the problem.

• About 40 percent — 556 of 1,366 water systems statewide — were in violation of drinking water standards during 2018, according to a report released Tuesday by the Louisiana Department of Health for legislators.

• A total of 1,762 boil advisories were issued last year, according to LDH. That doesn’t necessarily mean system failures, but boiling water before consumption is necessary when lines are repaired.

• About a third — 150 of 424 — of the water systems run by local or parish government ended 2017 paying more in expenses than they took in as revenues, according to an analysis by the Legislative Auditor. Eighty-six percent of the state’s population drink water delivered by public systems. (The rest of the 1,366 water systems are not publicly owned and include factories, mobile home parks, apartment complexes and the like.)

The first legislative focus, Durham said — one on which the water professionals, citizen activists and local government agree — is to appropriate, for the first time ever, money for a fund to pay the fiscal administrators who take over a local government’s finances.

Requested by the state Fiscal Review Committee and appointed by the court, fiscal administrators are given near dictatorial powers to push aside a town's elected local officials, raise fees and rates, reorganize departments and lay off local government employees.

“We’re having trouble finding fiscal administrators to work for free,” Durham said. “We need to be able to get fiscal administrators into these towns. It’s more than just water. The faster we can make that happen, the easier it’ll be on the system … It’s less costly for everyone involved.”

A Fiscal Administrator Revolving Loan Fund was created in 2014. The idea is for the state to pay the administrator and then the municipality would repay the loan fund after getting back on its feet, thereby providing money for the next administrator. But legislators never made the initial appropriation.

Another complication is that the Revolving Loan Fund was one of 34 statutory dedications slated for elimination a couple years ago when ridding the state budget of “statutorily dedicated funds” was all the rage. (Act 61 also set legislator pay at $177 a day plus mileage whenever they show up for meetings to discuss dedicated funds.)

So, in addition to finding money for the Revolving Loan Fund, legislators also will have to pass a law to keep the fund alive after July 2020.

Russel Honoré, the retired general whose “Green Army” of environmental activists have taken a lead in bringing drinking water problems to the forefront, backs efforts to appropriate money for the Revolving Loan Fund. But he says the state needs to get involved way before all the procedures for appointing a fiscal administrator are completed.

“By the time a fiscal administrator is called in, things have gone too far. We need to be proactive and require these towns to do their mandatory audits,” Honoré said.

Under current law, townships that fail to provide clean audits for three years in row are open to the state, after the third year, asking the courts to approve a fiscal administrator. Honoré has asked his lawyers to see what legal wording would be necessary to pick up that pace.

Dr. Jimmy Guidry, the state health officer, has long said that too many of these systems are too small to be sustainable and need to merge with nearby systems to create a larger customer base.

But consolidation is a lot easier to say than to do, he said.

Legalities need to be worked out: Who has the authority to handle the fees? Who is responsible for the repairs? How will the rates be increased?

Then there are political considerations. One of the key reasons many of the state’s villages and towns incorporated in the first place was to provide a legal framework for selling drinking water. And as populations dropped over the years, businesses moved out, tax revenues dropped, and the sale of drinking water became one of the few regular revenue sources.

At the same time, some of the larger systems don’t want to absorb a smaller one that is badly in need of repairs.

“The state is reticent to tell the locals what to do,” Guidry said. “But for some of these systems, this is going to be their option.”

John Gallagher, who heads the Louisiana Municipal Association, says the board for his Baton Rouge-based group that represents village, town and city governments will be meeting Feb. 19 to have a frank discussion about consolidation and decide what position locally elected officials should take.

“We’re writing the book on this as we go,” Guidry said. “Everybody recognizes this is a problem.”

Broussard residents will soon get their water entirely from the city’s water system, thanks to a $3.75 million investment in three new water w…

Clinton missed a key deadline Thursday to resolve problems with its troubled water system and the town could soon face daily fines of up to $847.

Shortly before Christmas the U.S. Census Bureau reported that Louisiana was one of nine states that lost population with 10,840 fewer people a…