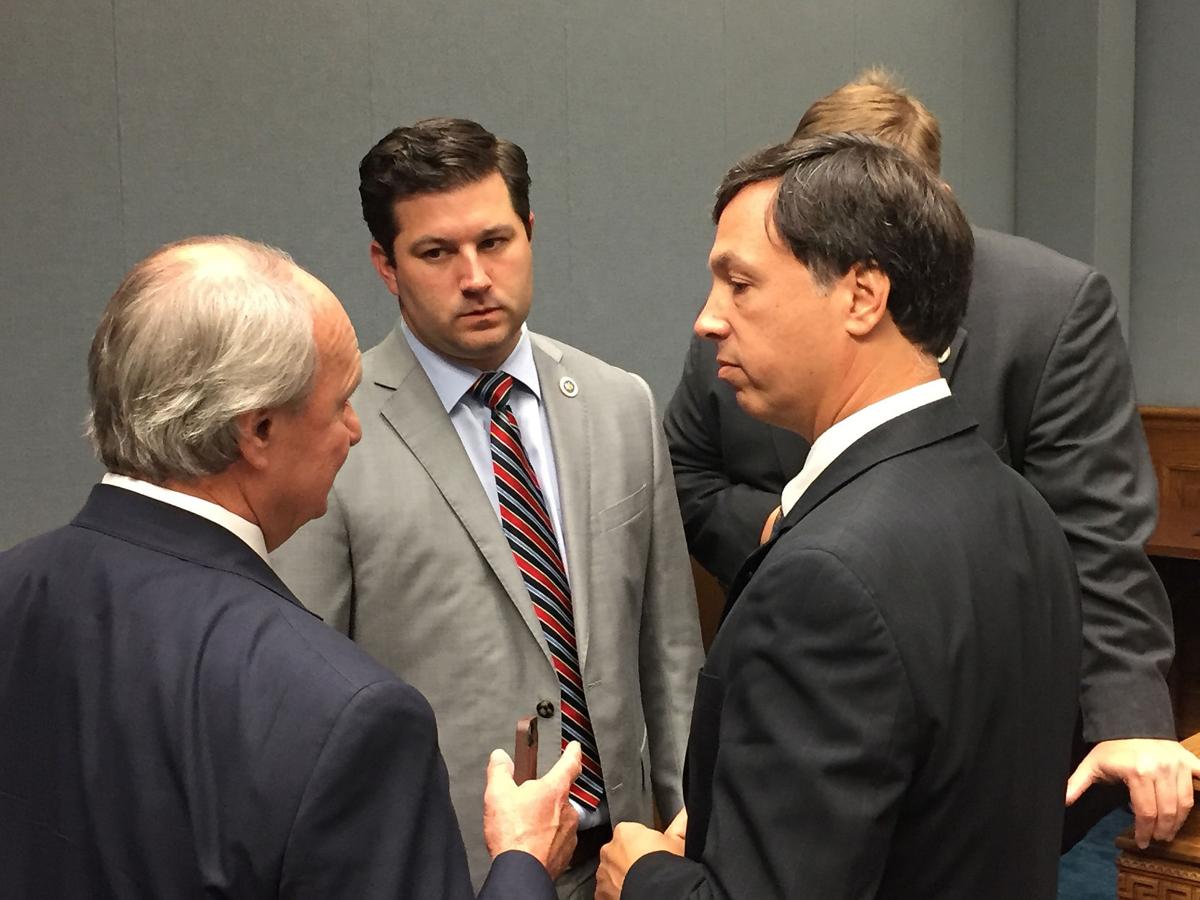 Robert Adley, an advisor to Gov. John Bel Edwards, from left to right, Sen. Rick Ward III, R-Port Allen, and Rep. Neil Abramson, D-New Orleans, meet after a June 2016 House Ways & Means Committee hearing. Ward had sponsored legislation that would place new limits on the inventory tax credit for businesses that also get an exemption from paying local property taxes on their facilities. It was one of the last two measures that could raise revenues for the state budget. 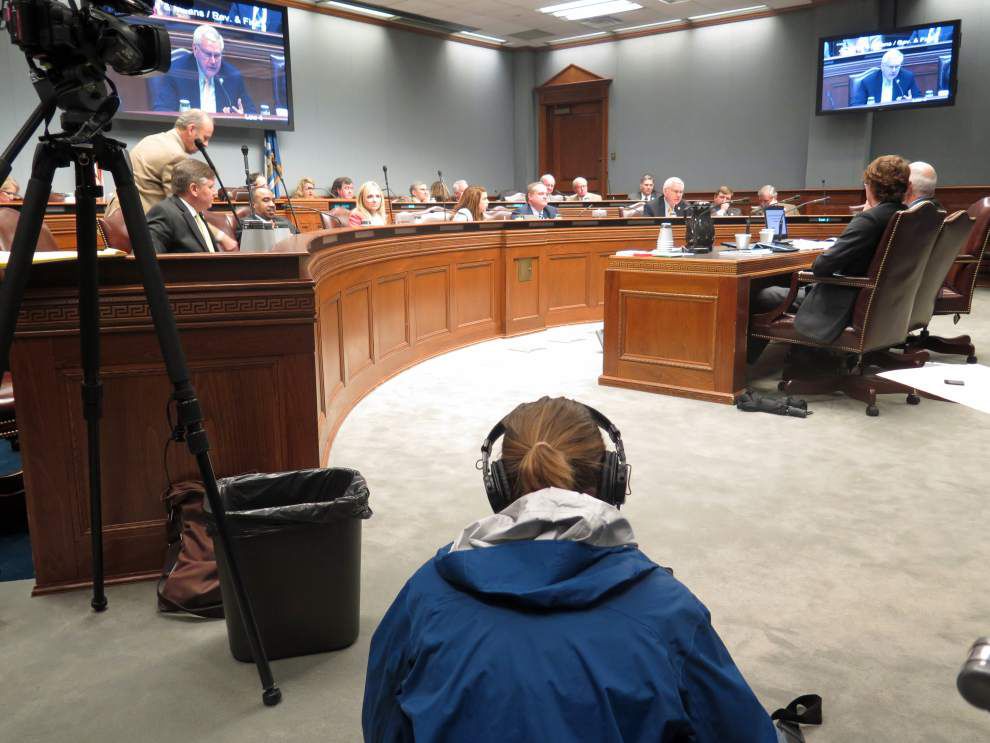 Leah Ellsworth of WAFB-TV prepares a report while a panel of economists - charged by the Louisiana Legislature to analyze the state's tax system - testify in March 2015.

Robert Adley, an advisor to Gov. John Bel Edwards, from left to right, Sen. Rick Ward III, R-Port Allen, and Rep. Neil Abramson, D-New Orleans, meet after a June 2016 House Ways & Means Committee hearing. Ward had sponsored legislation that would place new limits on the inventory tax credit for businesses that also get an exemption from paying local property taxes on their facilities. It was one of the last two measures that could raise revenues for the state budget.

Leah Ellsworth of WAFB-TV prepares a report while a panel of economists - charged by the Louisiana Legislature to analyze the state's tax system - testify in March 2015.

Academics and business groups have long knocked Louisiana’s tax on inventory — goods that businesses have on hand for sale.

Now a state senator wants to phase out the unpopular tax over 10 years, but more than money is at stake.

The changes sought by Sen. Bret Allain, R-Franklin, also would chip away at Louisiana’s centralized system of state government created nearly 100 years ago by Huey Long. That’s one reason Allain's plan has the support of the powerful Louisiana Association of Business & Industry.

Businesses pay the tax on their inventory to local governments then turn around and get the state to reimburse them. So the tax doesn’t really hurt businesses, but phasing it out would cost local governments.

Lawmakers and lobbyists agree any plan to phase out the inventory tax must also provide local governments with enough revenue from another tax to offset the phase-out. Local officials don’t believe this is possible under Allain’s plan, however.

Allain insists it is, and he proposes to eliminate the inventory tax gradually through changes he will offer to Senate Bill 26 when it is before the full Senate on Tuesday. He says an executive order issued last year by Gov. John Bel Edwards to shave a popular tax break known as the industrial tax exemption would produce enough revenue to make up the difference for local governments.

Two years ago, rebating the inventory tax cost the state $569 million, but the cost dropped to $225 million last year.

Louisiana Economic Development, a state agency, projects the governor’s changes to the industrial tax exemption will generate $247 million more to local governments by year nine and $378 million by year 10. But in the initial years, the extra revenue from paring the industrial tax exemption would fall millions of dollars short of making up the revenue local governments would lose from the inventory tax phaseout.

That probably wouldn’t be popular with Louisiana voters, and they would have the final say because the proposal would require a change to the state Constitution. And the proposal would go before voters only if Allain can win a two-thirds super-majority in the Legislature, first in the Senate, then in the House.

“That is a tall order,” he said. “But we need to begin the debate.”

To win that two-thirds vote, he will have to overcome the opposition of sheriffs, school boards, assessors and municipal government leaders. All of them that fear the overall tax swap would cost them money.

“A lot of parishes won’t be made whole,” said Steve Nosacka, the mayor of Gramercy in St. James Parish. He said inventory taxes account for 40 percent of St. James’ budget and nearly as much in neighboring St. John the Baptist Parish. Of Louisiana’s 64 parishes, those two are the most dependent on inventory tax, according to a 2014 Advocate analysis.

Nosacka represented the Louisiana Municipal Association on a task force chaired by Allain that spent months trying to agree on a proposal to repeal the inventory tax and find the necessary offsetting revenue for local governments. The task force concluded its work in January still unable to agree on a solution, reflecting the steep challenges Allain faces.

The idea of phasing out the inventory tax is hardly new — in fact, the oddly structured setup now in place was created in the early 1990s as a backdoor way of eliminating the tax. Killing it altogether was among the recommendations of a separate task force that spent 2016 studying the state’s tax system.

“A tax on something that is relatively mobile is a tax that creates distortions in how people behave,” said Jim Richardson, an LSU professor who co-chaired the task force. He said 10 states impose an inventory tax on business and that businesses and assessors have had little incentive to limit its cost because it’s borne by state taxpayers.

Indeed, Richardson’s task force found the assessed value of inventories over the past decade rose at a much faster rate than the increase in assessments in real estate and personal property.

Under current law, parish assessors assess a tax on the value of inventory — vehicles for sale at car dealers, for example, or oil and gas held in storage tanks. Companies, after paying that as part of their property tax bill, then seek reimbursement for that payment from the state. In 2016, those reimbursements cost the state $225 million, down from $569 million in 2015.

Richardson said the huge drop resulted from two major factors: First, oil and gas companies reduced their inventories because of the drop in oil and natural gas prices, resulting in those commodities being worth less. In addition, state lawmakers reduced the amount of the inventory tax reimbursement that companies could claim from the state, especially for companies that were owed at least $1 million in refunds.

Allain argues that one of the benefits of phasing out the inventory tax is that Louisiana will become more “business-friendly” in the rankings of the Tax Foundation, a Washington, D.C.-based nonprofit with substantial sway in Baton Rouge.

But the benefits appear to be minimal. A 2015 analysis by the group found that ending the tax would have improved Louisiana’s ranking from 24th to 12th on its property tax index, but the state would have moved only from 35th to 33rd on its state business tax climate.

Allain wants to make his changes by amending SB26, sponsored by state Sen. JP Morrell, D-New Orleans. Morrell’s bill would no longer allow companies to apply the industrial tax exemption to the portion of their property taxes owed to schools.

Scott Richard, who is executive director of the Louisiana School Boards Association, supports Morrell’s bill because it would produce millions of extra dollars for schools. But he opposes Allain’s proposed changes because too many school districts would lose money even as some others received more.

Allain’s proposal taps into the changes Edwards’ executive order made to the state's industrial tax exemption, often regarded as the most generous of its kind to business in the country. It traditionally offered companies, usually large manufacturers, two five-year exemptions from all property taxes that would ordinarily be assessed on their new plants and equipment. Under Edwards’ order, companies now qualify for 100 percent of the exemption for five years and then for 80 percent of the exemption for three more years.

The amount of inventory subject to taxation tends to be highest in the industrial parishes along the Mississippi River, and that’s also where industrial tax exemptions are concentrated. That’s why Allain believes capturing the revenue from reducing the industrial exemption will mostly offset the revenue those parishes will lose from phasing out the inventory tax.

But Allain admits that several parishes — among them Lafayette, Bossier and St. Tammany — would lose money under his proposed changes. “It’s not a perfect match,” he said.

Another complication: The revenue gained from the governor’s order to scale back the industrial tax exemption would not match on a year-by-year basis the revenue that would be lost from phasing out the inventory tax.

The debate on Allain’s proposal will center not just on its merits but also on whether the state ought to shift away from the Huey Long model, which has given governors and state lawmakers the power to dole out substantial favors to local officials, while making it difficult for local governments to forge their own way.

“Government would work better if locals pay for local government services,” he said. “They shouldn’t have to come to Baton Rouge to beg for more money.”

Figures from LABI show 56 percent of the money collected by the state general fund last year was sent back to local governments.

The biggest transfer was the $3.7 billion that funded public schools. But the state also gives money to local governments to shore up spending in various areas: boosting wages for firefighters, police and district attorneys, for instance, and repairing roads, among other activities.

“We have to empower locals to make smart decisions that reflect the needs of their local economy, their local taxpayers and their local services,” Waguespack said. 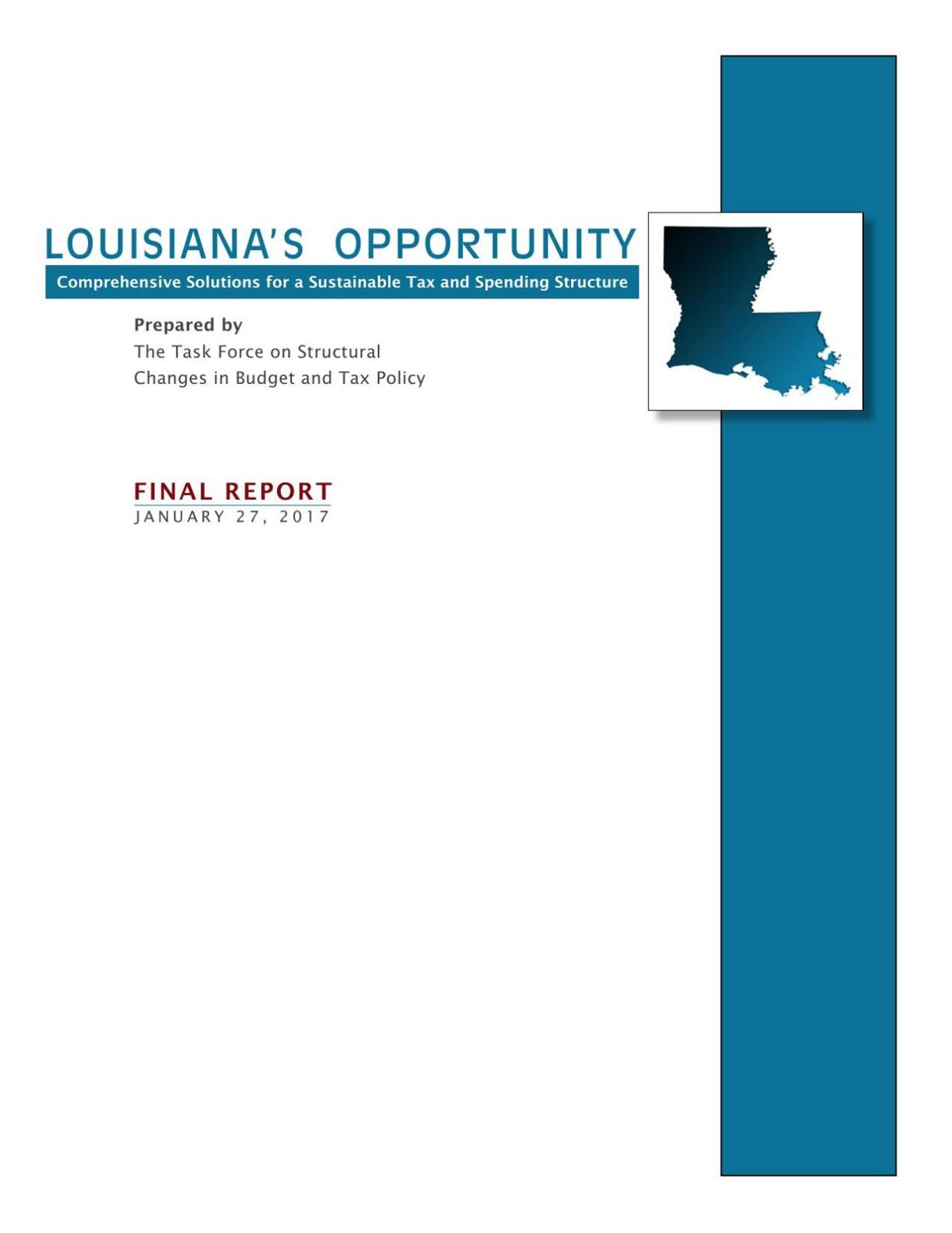 Elizabeth Crisp, of The Advocate Capitol news bureau, contributed to this report.

Correction: This article has been updated to clarify the changes that the Legislature made to make the inventory tax credit less generous.