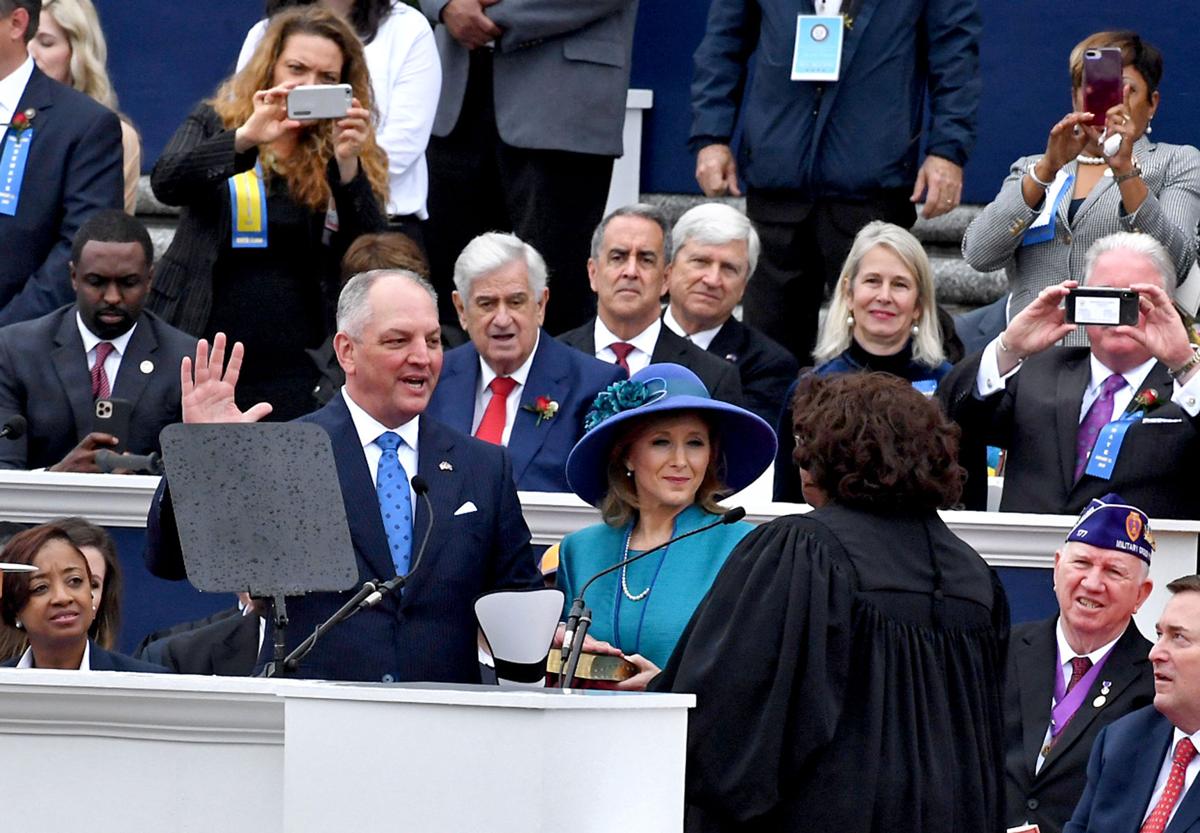 Louisiana Governor John Bel Edwards receives the oath of office from The Honorable Bernette J. Johnson, Chief Justice of the Louisiana Supreme Court during his inauguration ceremony in front of the State Capitol building Monday. Gov. Edwards’ wife, Donna, stands beside him. 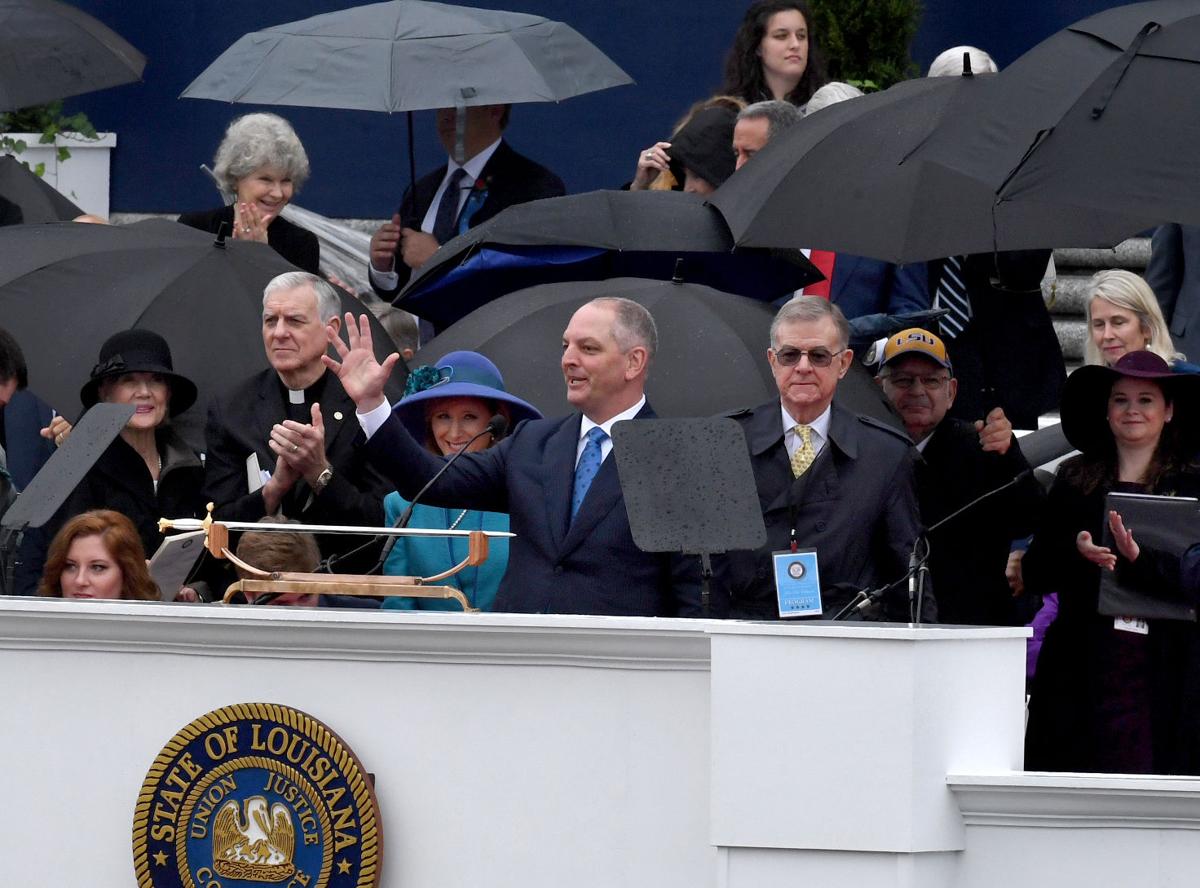 Louisiana Governor John Bel Edwards waves to the crowd after delivering his inaugural address near the end of his inauguration ceremony in front of the State Capitol building Monday. 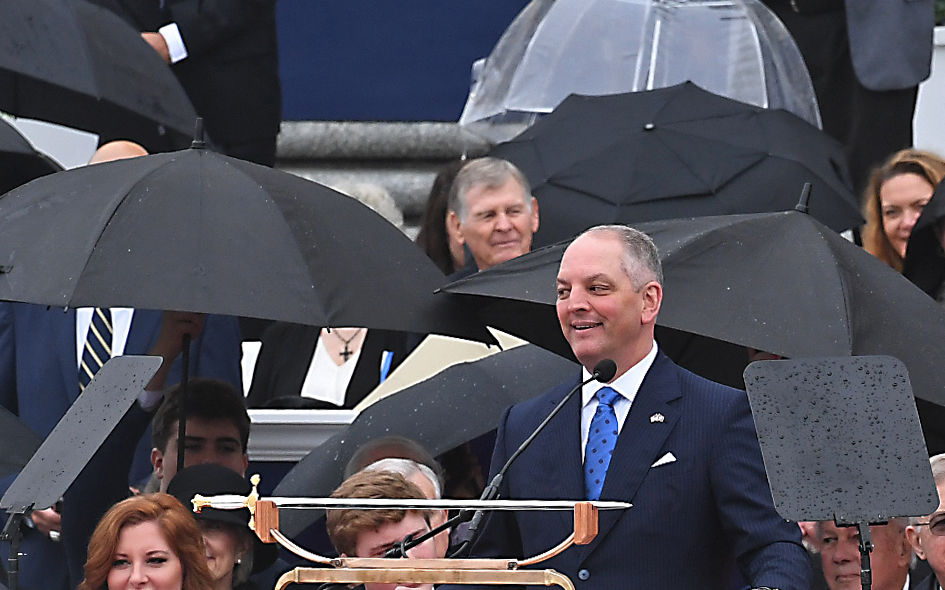 Louisiana Governor John Bel Edwards makes a joke about the rain during his inaugural address in front of the State Capitol building Monday. 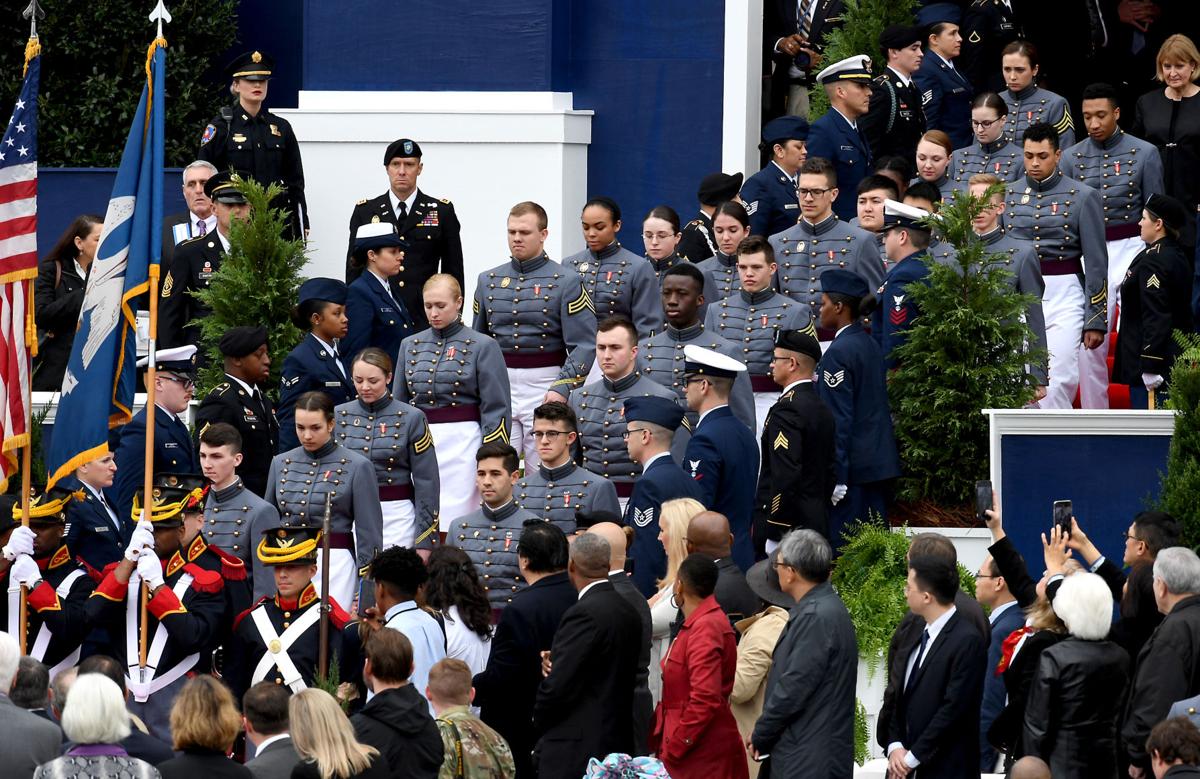 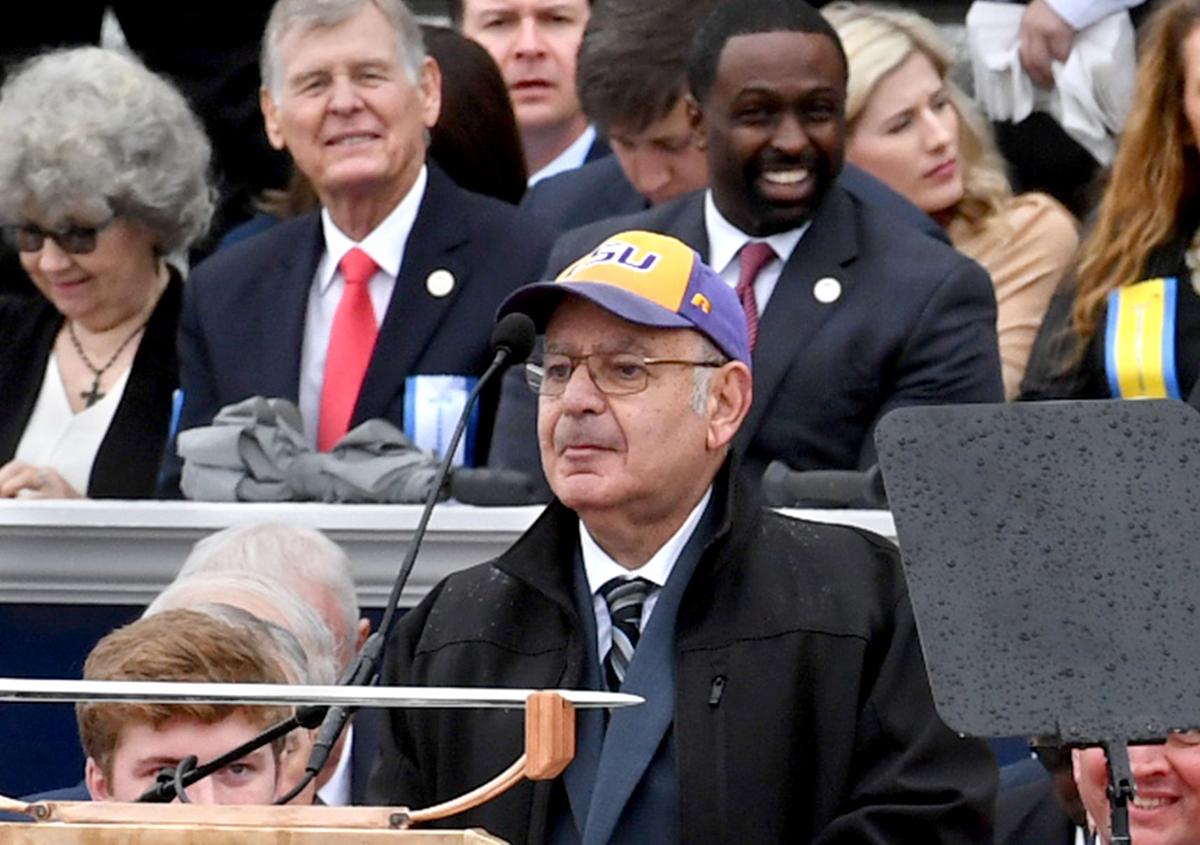 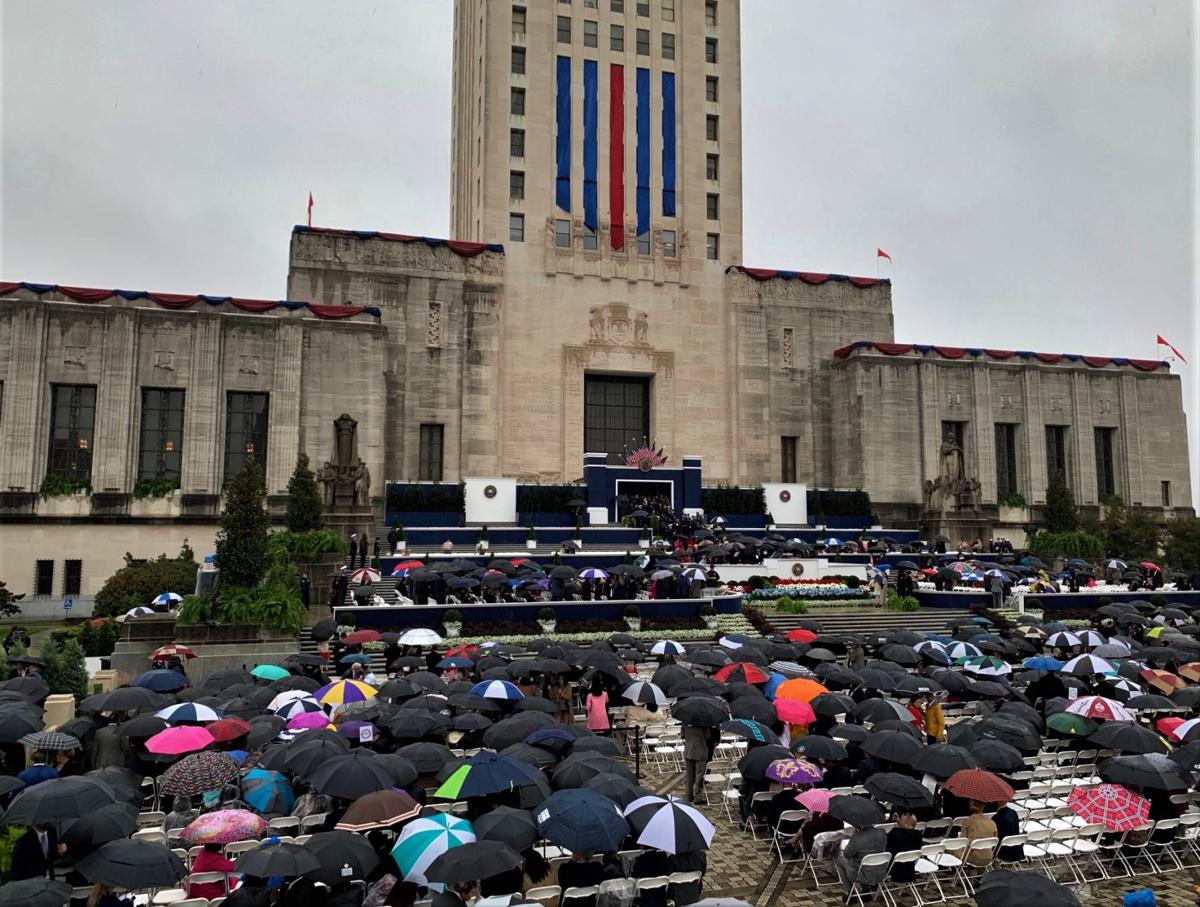 Crowds gather Monday, Jan. 13, 2020, under a misty rain to watch John Bel Edwards take the oath of office for a second term as Louisiana governor. 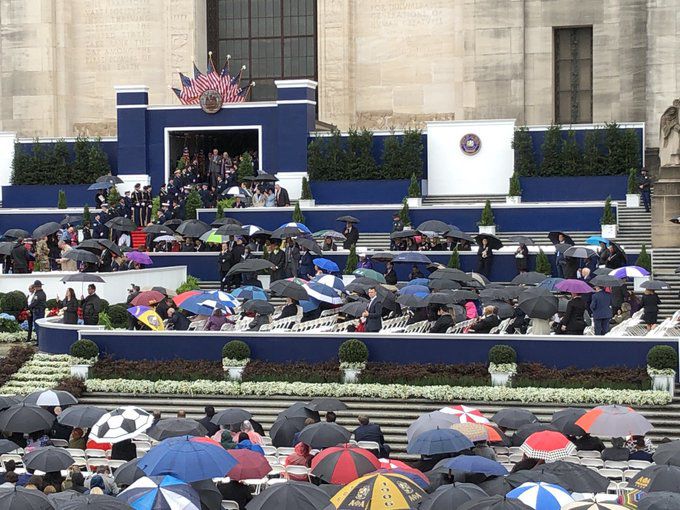 The Louisiana governor's inauguration on Monday morning in Baton Rouge

Louisiana Governor John Bel Edwards receives the oath of office from The Honorable Bernette J. Johnson, Chief Justice of the Louisiana Supreme Court during his inauguration ceremony in front of the State Capitol building Monday. Gov. Edwards’ wife, Donna, stands beside him.

Louisiana Governor John Bel Edwards waves to the crowd after delivering his inaugural address near the end of his inauguration ceremony in front of the State Capitol building Monday.

Louisiana Governor John Bel Edwards makes a joke about the rain during his inaugural address in front of the State Capitol building Monday.

Crowds gather Monday, Jan. 13, 2020, under a misty rain to watch John Bel Edwards take the oath of office for a second term as Louisiana governor.

The Louisiana governor's inauguration on Monday morning in Baton Rouge

After a 19-gun salute in a misting rain Monday, John Bel Edwards took the oath a second time as Louisiana governor and urged a rejection of Washington-style partisanship.

Surrounded by state dignitaries, many under umbrellas, Edwards said during his 28-minute inaugural address that he hoped to grow funding for early childhood education, increase teacher pay and expand workforce development. He also plans to renew his quest for a higher minimum wage and for equal pay for male and female workers.

How well that plan works for the Democratic governor will be up to the Republicans who firmly control both chambers of the Louisiana Legislature. Two-thirds of the 39-seat state Senate, enough to override a gubernatorial veto, are Republican. And the GOP holds 68 of the 70 seats needed for a supermajority in the 105-seat state House.

"The future is ours to seize. But we have to commit here and now to be great, to work together, and continue to reject the partisan rancor and dysfunction that plagues Washington D.C.," Edwards said. The governor won a second term by about 40,000 votes in tight race that spent at least $73 million and saw President Donald Trump campaign in Louisiana three times, demanding that Edwards be fired.

No parades were marched and no hot dogs were served as they were during inaugurations back in the day. In fact, Edwards canceled the traditional inaugural ball and moved things along so that he and others could travel to New Orleans for the College Football National Championship game, in which LSU plays.

Gov. John Bel Edwards will be sworn in today for a second term, but he won’t be getting the lion’s share of Louisiana’s attention. Instead, th…

"Like many of you, I too am looking forward to an LSU victory tonight down in New Orleans in our very own Superdome," Edwards. The governor was introduced by Dan Borné, who is the retired president of the Louisiana Chemical Association and has been the public address announcer at Tiger Stadium during football games for many years.

Rain drizzled on the grounds of the State Capitol, where hundreds of white chairs were set up in front of the steps with the names of the states chiseled. The Capitol was adorned with blue and red ribbons as onlookers filed outside with umbrellas.

“You know in some cultures, rain is a sign of good luck, so that’s what we’re going to see this as,” said Edwards, who marched to the stage to the strains of Aaron Copland’s “Fanfare for the Common Man.”

Former governors, including Bobby Jindal, whom Edwards succeeded, and most of the state's congressional delegation were in attendance, as was one congressman from South Carolina, where LSU's football foe, Clemson University, is located.

Before getting into the meat of his inaugural address, Edwards turned to congratulate the newly elected leaders of the Louisiana Legislature — Clay Schexnayder, of Gonzales, and Page Cortez, of Lafayette — promising that he stood ready to work with Republicans.

Schexnayder's election was considered by many a blow to Landry and U.S. Sen. John N. Kennedy, R-Madisonville, two of Edwards' most vocal foes. The two statewide GOP leaders had pressured Republican representatives to line up behind Livingston Parish Rep. Sherman Mack, arguing that party members, alone, could and should select the House's top leader. But the 35 House Democrats voted as a bloc along with 23 Republicans and two representatives without party affiliation to deliver Schexnayder the victory.

Without nearly as much drama, Cortez was elected unanimously to lead the Senate.

Edwards, 53, was widely considered an accidental governor as he easily won election four years ago to break up the Republicans’ solid hold on state government and to become the only Democratic governor in the Deep South. The two leading GOP candidates in 2015 beat up on the third, fellow Republican David Vitter, by reminding voters of Vitter’s involvement with prostitutes and reminding other elected officials of the then U.S. senator's penchant for playing hardball politics.

Consequently, Edwards entered his first term with a bull's-eye on his back, put there by state and national Republicans. It took seven special sessions to come to an agreement over how to balance the state’s budget, which had been running revenue deficits each year for about a decade. Edwards and moderate Republicans agreed to a series of spending cuts, suspension of some tax exemptions and an increase in the state sales tax of a little less than half a cent. The budget going into the next legislative session, which begins March 9, features a surplus of more than $500 million.

“Because of the work we put in over the last four years, Louisiana has achieved economic stability and growth and is stronger because of it,” Edwards said. “We found common ground in order to solve the fiscal crisis, and as a result, we are now operating with surpluses instead of deficits."

Our Views: Congratulations to John Bel Edwards, but what is the vision for four years?

The late President George H.W. Bush was probably not the most eloquent man ever in the Oval Office, but he left us a phrase much mocked during…

Edwards said the surpluses allowed the administration to complete more than 1,300 improvement projects that improved roads and bridges.

"I signed a bill appropriating $700 million for critical transportation projects across the state, the largest single new investment in 30 years, which was made possible by the bipartisan efforts of the legislature — yet another example of what we can do for the people of our state when we cast party labels aside and work together," Edwards said.

Outside the State Capitol during his first term, Edwards had to deal with a police shooting that led to tense confrontations and the ambush murders of three law enforcement officers. That was followed by a rainstorm that dumped 7 trillion gallons of water on the state and flooded tens of thousands of homes and businesses.

About a third of the legislators, all of whom took their oaths Monday morning, have never served in either the House or Senate. But a lot of them ran on support of improving care for children for up to three years of age by adding and funding an educational component.

“We know that education is the key to economic opportunity and that a pathway to prosperity must begin at the earliest stages of life. That is why the highest priority for new investments in education of my second term will be early childhood education,” Edwards said. "We are also going to better fund every level of education. For as long as any of us can probably remember, K-12 students, parents and educators were told to be happy with a standstill budget that did not account for inflation. But I’ve met with educators all across the state and they can’t run their classrooms on empty promises. They deserve better."

Sam Karlin and Will Sentell of the Capitol news bureau contributed to this report.

A day after a faction of Louisiana House Republicans united with Democrats to elect state Rep. Clay Schexnayder as House speaker, the majority…