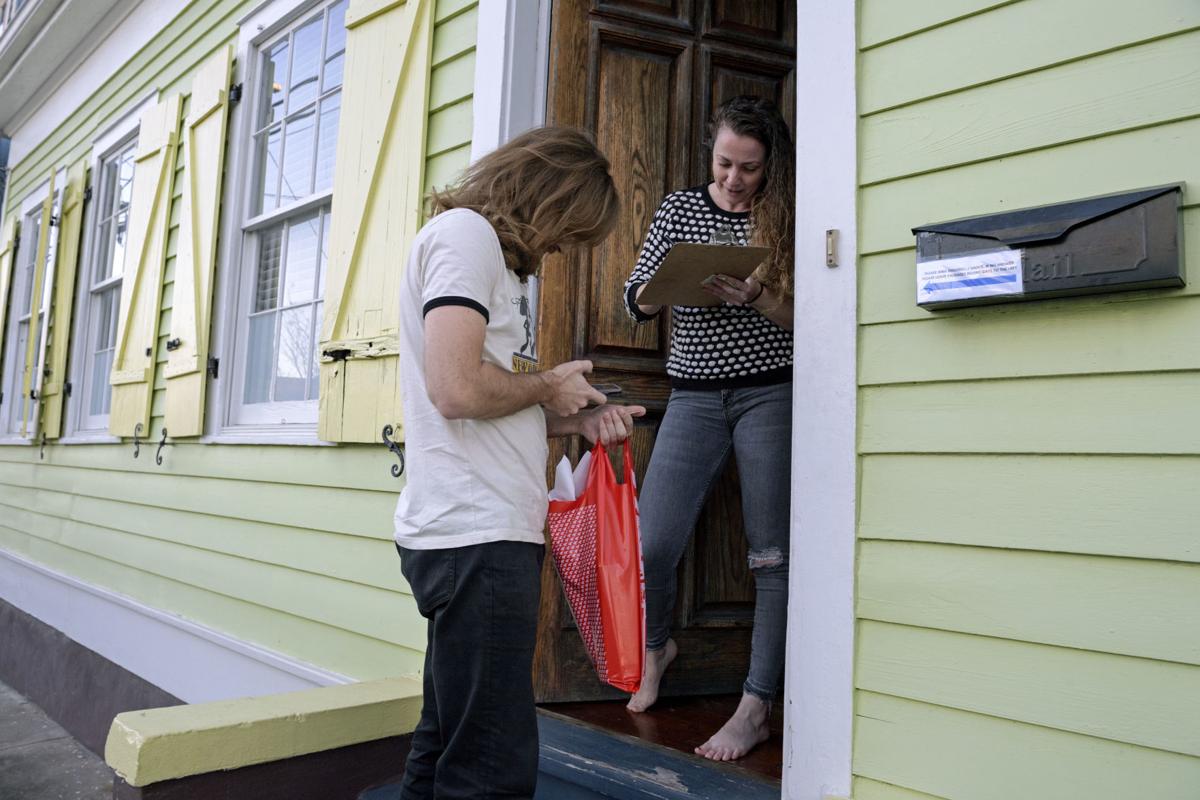 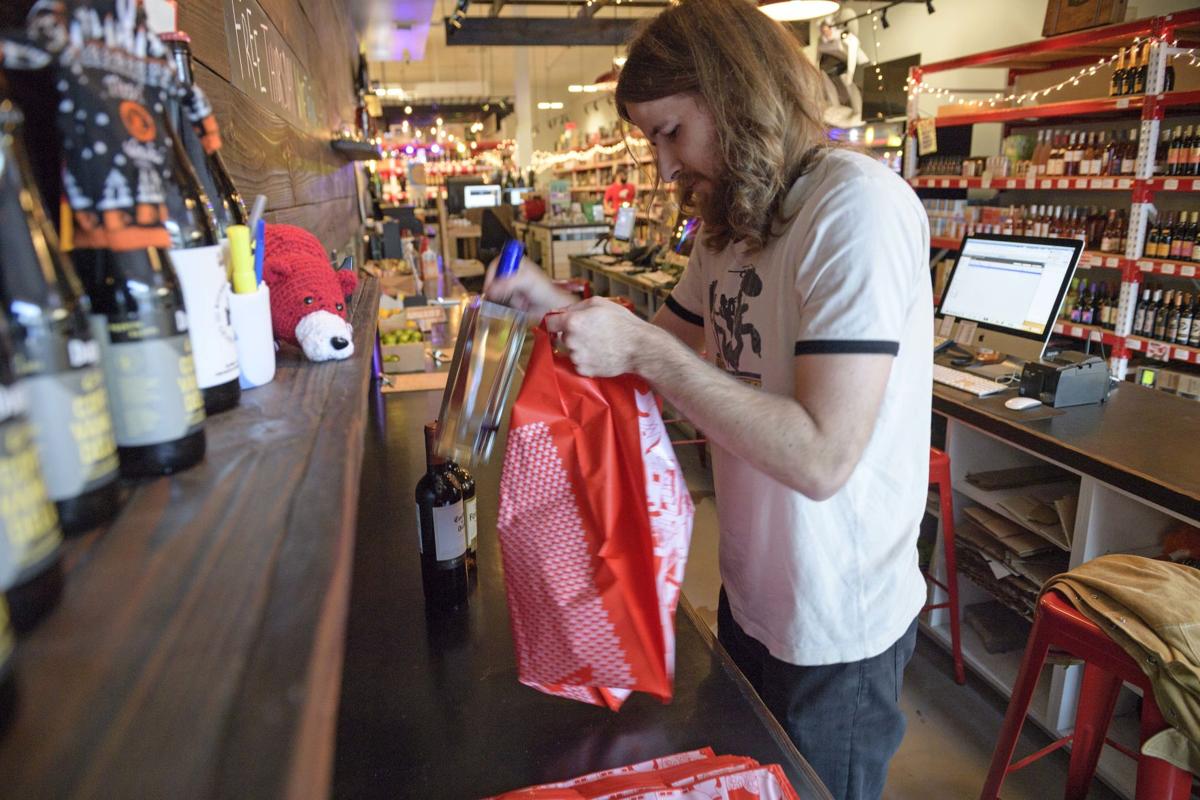 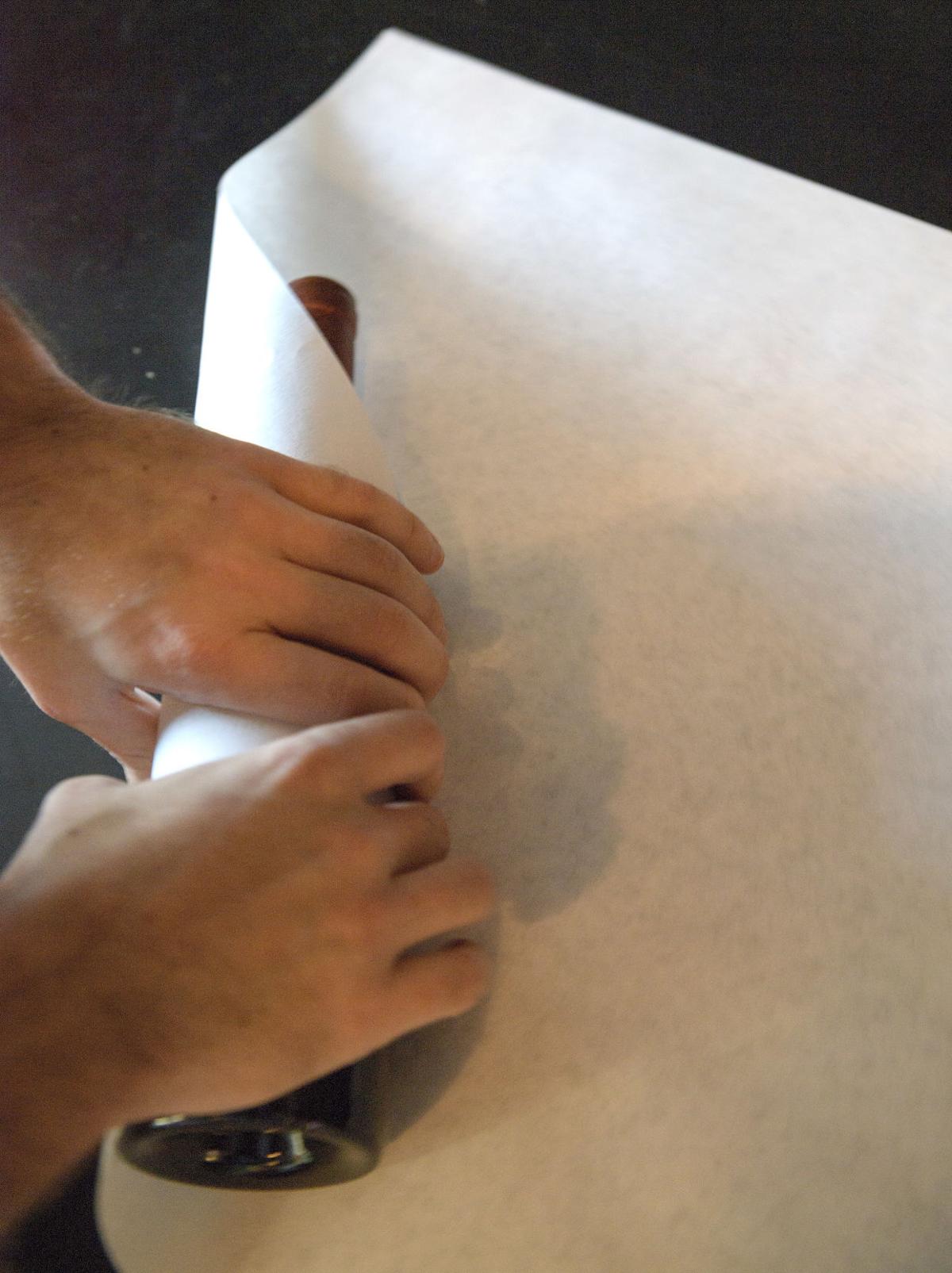 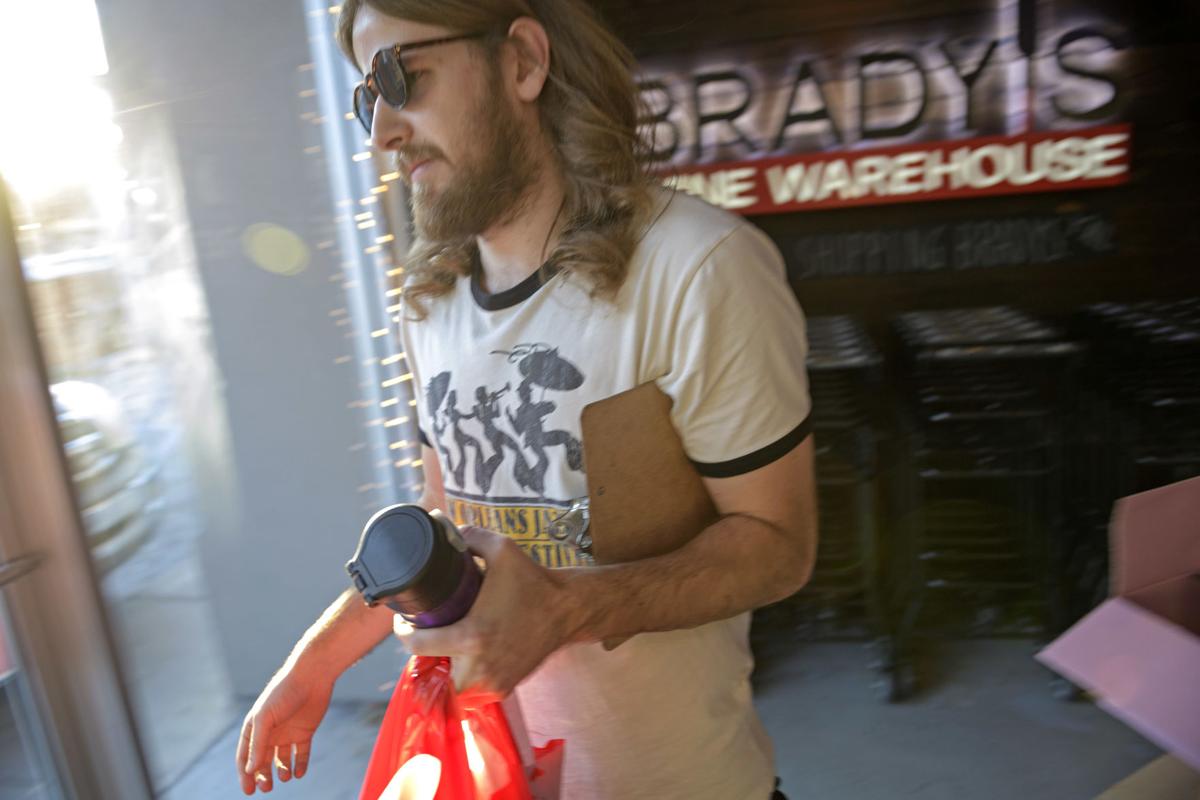 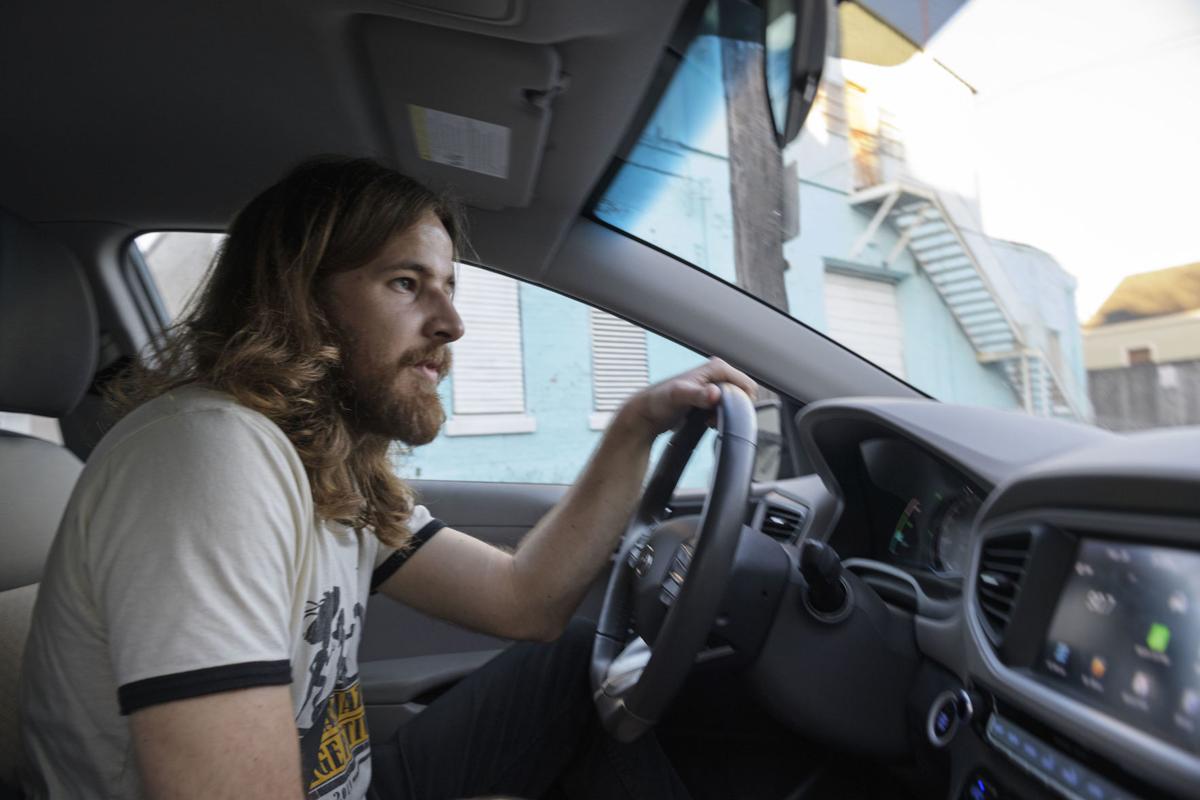 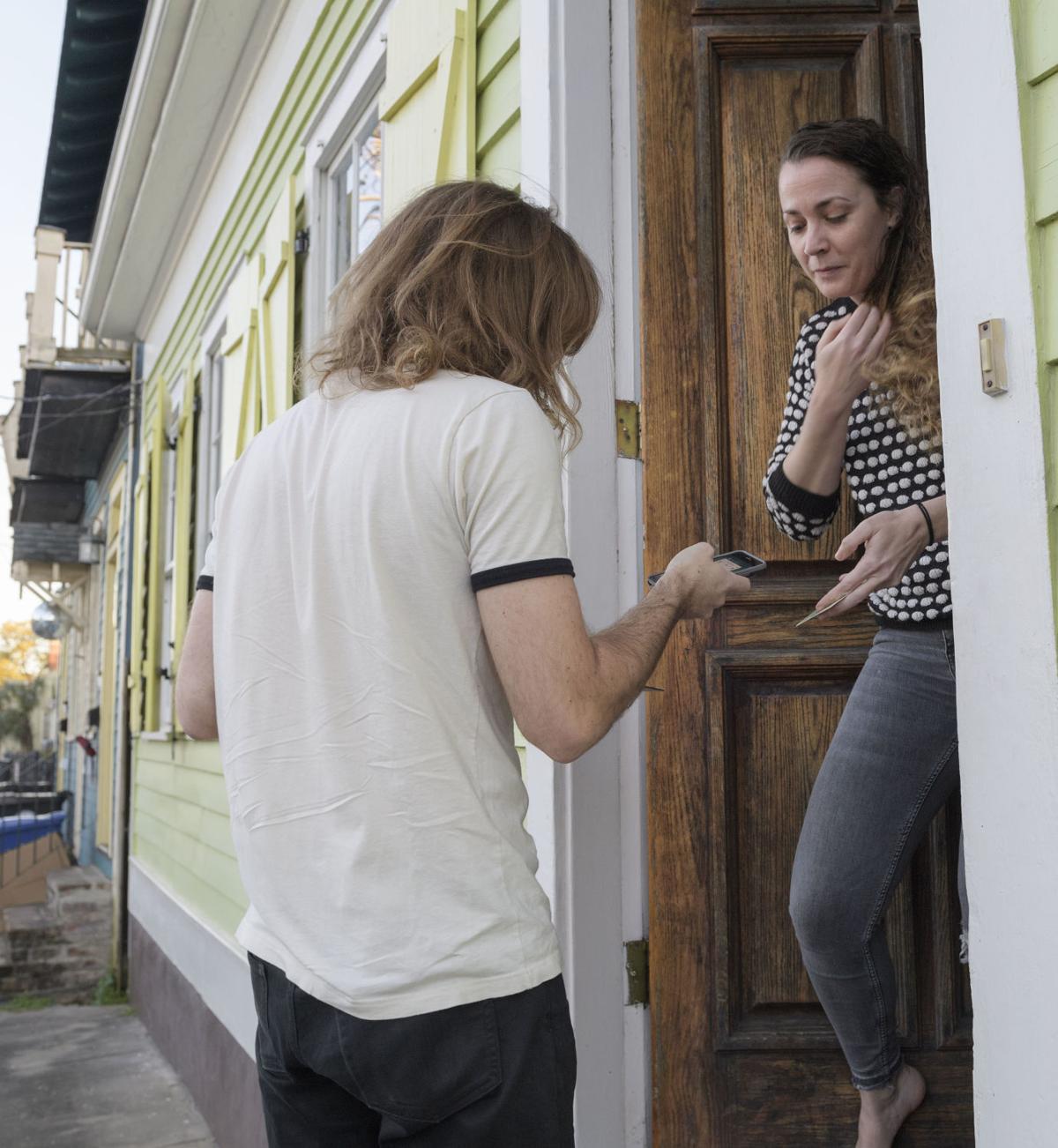 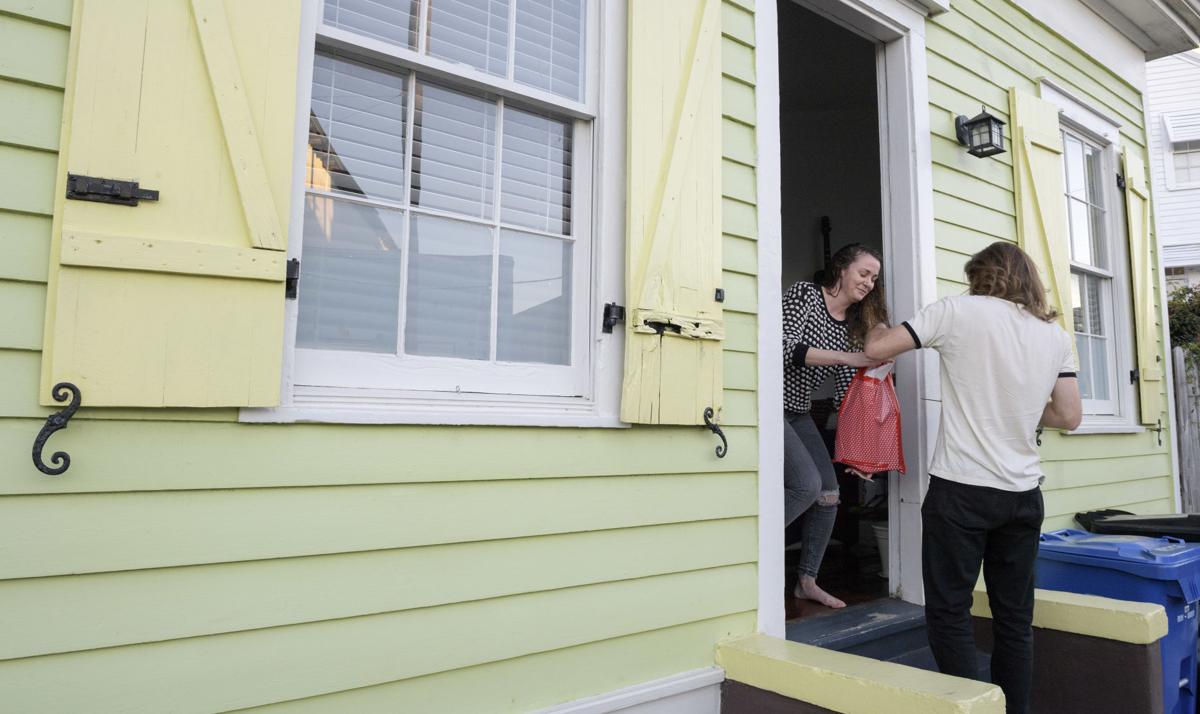 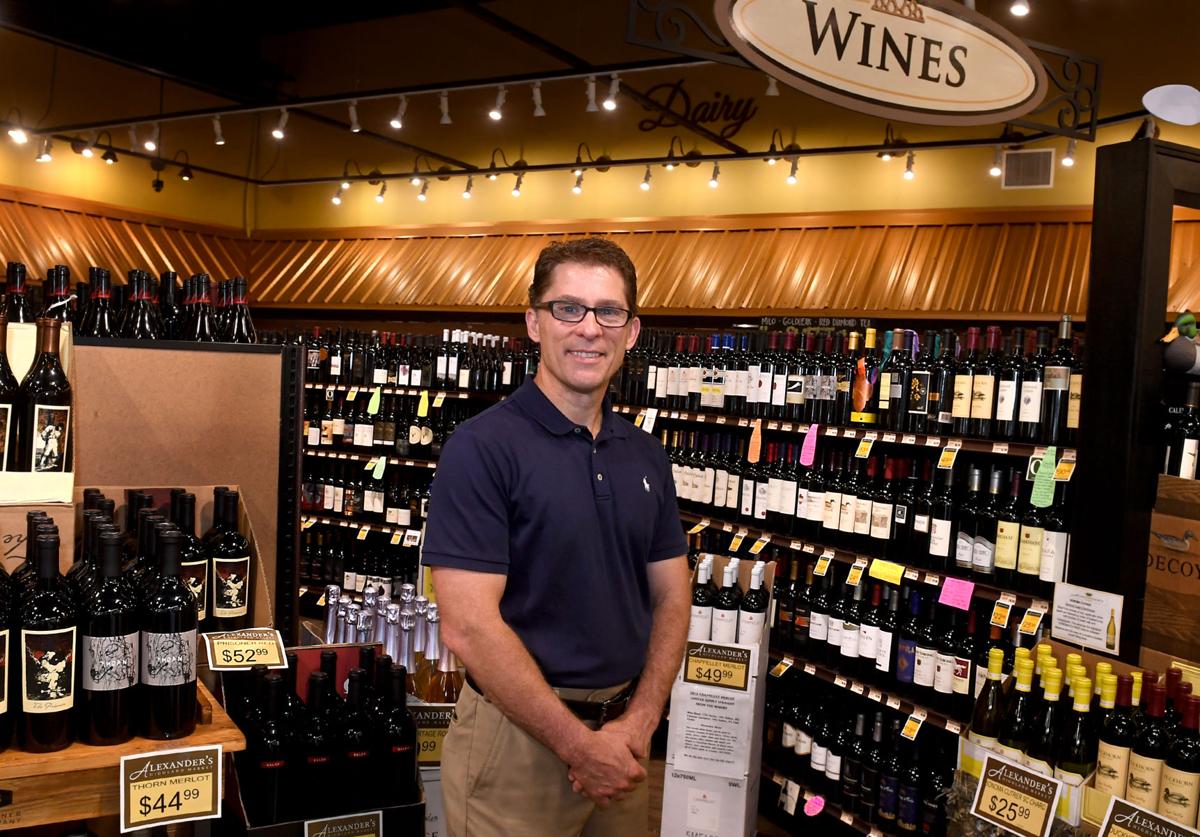 Lathan Alexander, owner of Alexander's Highland Market, said because of the coronavirus pandemic, the number of orders for curbside grocery pickup has skyrocketed from 8 to 10 a day to 120. The store used to fill pickup orders in two hours; visitors to the store website Thursday afternoon were told their orders won’t be available for pickup until Monday afternoon.

Lathan Alexander, owner of Alexander's Highland Market, said because of the coronavirus pandemic, the number of orders for curbside grocery pickup has skyrocketed from 8 to 10 a day to 120. The store used to fill pickup orders in two hours; visitors to the store website Thursday afternoon were told their orders won’t be available for pickup until Monday afternoon.

Since Louisiana legalized the delivery of alcohol to consumers’ homes last year, about 50 companies have received the necessary paperwork to do so, mainly grocers and liquor stores.

But one of the main intended beneficiaries of the law — the food delivery startup Waitr — never applied for a permit to deliver alcohol. And while Waitr pushed for a provision in the law that only allowed deliveries by services, like it, that employ hourly workers instead of contractors, Waitr is now reclassifying its employees as contractors and won’t even be allowed to deliver alcohol if it wants to.

Waitr to lay off all 2,300 Louisiana drivers in these 5 markets; some to become contractors

Waitr will lay off 2,300 Louisiana employees in April as the restaurant delivery company transitions drivers from hourly employees to independ…

The result is no major third-party delivery company is currently offering alcohol delivery throughout the state, though some stores with hourly employees are.

“I think what’s going to happen now is, if no third-party delivery service wants to have W-2 employees, there will nobody satisfying that consumer request” to deliver alcohol, said Thomas Carmody, the former state representative who carried legislation to legalize alcohol delivery last year.

“It sounds to me like right now it’s just in limbo,” he added.

The Legislature took up alcohol delivery in 2018, ultimately killing the legislation and creating a task force to study the issue. That task force, which included representatives from Waitr, lobbying groups, several lawmakers and others, issued a set of recommendations that turned into legislation that passed last year.

Among the recommendations was that alcohol delivery should be limited to only companies with hourly employees, as opposed to the types of independent contractors used by most third-party delivery services like Instacart, Shipt, UberEats and others. Waitr was a rare case of a third-party delivery service that used hourly workers, until it laid off all 2,300 Louisiana drivers and told them to reapply to be independent contractors.

Carmody said the decision to require hourly workers was aimed at providing a clear line of liability. For instance, if a driver failed to follow the rules and dropped off alcohol for someone underage, lawmakers thought allowing independent contractors to deliver the beverages could muddy the waters for who is responsible.

“That was the linchpin in it,” he said, adding the bill would not have passed if it allowed independent contractors to deliver.

'It definitely hurts': Waitr to move drivers from hourly employees to contractors

That excluded third-party delivery services like Instacart, which was already partnered with some Louisiana grocers, from selling alcohol. The company said it delivers alcohol in 20 states and Washington, D.C., through its independent contractors, but not in Louisiana because its business model is not allowed through the state’s alcohol delivery laws.

Louisiana Speaker Pro Tem Rep. Tanner Magee, a Houma Republican, filed a bill for the upcoming legislative session that would allow companies to use contractors – workers who file a 1099 form with the IRS – to deliver alcohol, an effort he said is aimed at reducing red tape on businesses to deliver alcohol. The bill, HB175, would also loosen several other restrictions currently in place for alcohol delivery.

Rouses Supermarket, a major regional grocery chain based in Magee's district, is expanding into the delivery market but aren't able to make a profit under the current alcohol delivery laws, which require using hourly wage employees.

"What the bill seeks to do is allow existing grocery stores and restaurants to deliver alcohol to capture the burgeoning food delivery market," Magee said. "This is the future of food service in the United States, not just in Louisiana. We wanted to make sure our businesses can compete. You don’t want them being left out."

There are ways to get alcohol delivered in Louisiana, even if companies like Waitr can’t bring it to customers.

Retailers interested in delivering beer, wine and liquor to homes and businesses can now apply for a permit from the Louisiana Office of Alcoh…

Drizly, a delivery service specifically aimed at shipping alcohol to customers, does operate in Louisiana, but a spokeswoman said the service doesn’t deliver alcohol. Instead, the firm connects customers with retailers who deliver it with their own employees. The firm has partnered with several retailers, including Brady’s Wine Warehouse in New Orleans, as well as Shop Rite and Tobacco Plus stores across the state.

“All partner retailers make their own deliveries using their personnel,” said Alessandra Forero, a public relations official representing Drizly. “Drizly is a marketplace that connects consumers with local retailers. Those retailers handle all order fulfillment, payment, ID verification and delivery.”

Patrick Brady, the owner of Brady's Wine Warehouse, said alcohol delivery has gone well for his store since being legalized. He's hired several drivers who work part time making deliveries, and he said the company delivers alcohol to customers' doorsteps about every day.

Fifty-one retailers have permits to deliver alcohol, and another 24 companies — including one small third-party delivery service in Leesville — have pending applications.

Ernie Matherne, owner of Matherne’s Market, which has four locations, said he was intrigued by alcohol delivery, mainly as a way to sell drinks to people tailgating on LSU’s campus during game days who want to order from his store. But when he saw the rules, they prohibited alcohol delivery to universities, as part of a list of regulations created by the Office of Alcohol and Tobacco Control.

Restaurants and stores across Louisiana are expected to start home deliveries of alcoholic beverages in the next two months, after Gov. John B…

While Matherne said he understands why some of the rules are in place, it’s too “demanding” to make delivering alcohol worth it, even though he is permitted to do so.

“I have some stores I have not delivered one bottle,” he said.

Ernest Legier, deputy commissioner of the Office of Alcohol and Tobacco Control, said the agency does not track the volume of alcohol sales in the state, only the businesses permitted to do so. It does require those companies to keep logs of its deliveries, however, in case it needs to investigate.

The agency’s rules require the alcohol be manufacturer sealed, prohibiting mixed drinks. Retailers can’t deliver outside of the parish they are located, or outside the hours the store is open. They can’t deliver to schools, including colleges, or churches, and they must retain records of all deliveries for three years.

Matherne said while alcohol delivery hasn’t taken off, online shopping is slowly but surely becoming a viable part of his business.

Very soon adults can start receiving adult beverages delivered directly to their homes under legislation that is close to becoming law.

“Let’s face it. Everybody in the world is going to online shopping and home delivery,” he said. “It’s definitely the future. No doubt. Not only the shopping but also the delivery of it.”

Alcohol delivery in Louisiana is 'in limbo.' This recent Waitr decision was a factor.

Since Louisiana legalized the delivery of alcohol to consumers’ homes last year, about 50 companies have received the necessary paperwork to d…

Not booming, but not busting: After another solid year in 2019, economy still moving toward recovery

At Toot Toot’s Kitchen in Youngsville, things have moved quickly since Ashley Higginbotham opened it in 2018.

As the city of Broussard prepares to unveil a master plan for its downtown district, at least one developer is ready to break ground on projects.

Fears about the global impact of the coronavirus outbreak has hammered Louisiana stock prices, caused some businesses to adjust supply chains,…

Another salvo in LCG-Sheriff's Office court duel, another cry of political smears

The rhetorical food fight between the Lafayette Parish Sheriff’s Office and city-parish government continued this week, with a city-parish ret…

Dirty politics might seem to be getting dirtier by the day, but you can go back to 1800 for the first reported case to find that.

Louisiana lawmakers have passed legislation making it easier for companies to deliver alcohol in the state, granting third-party delivery serv…