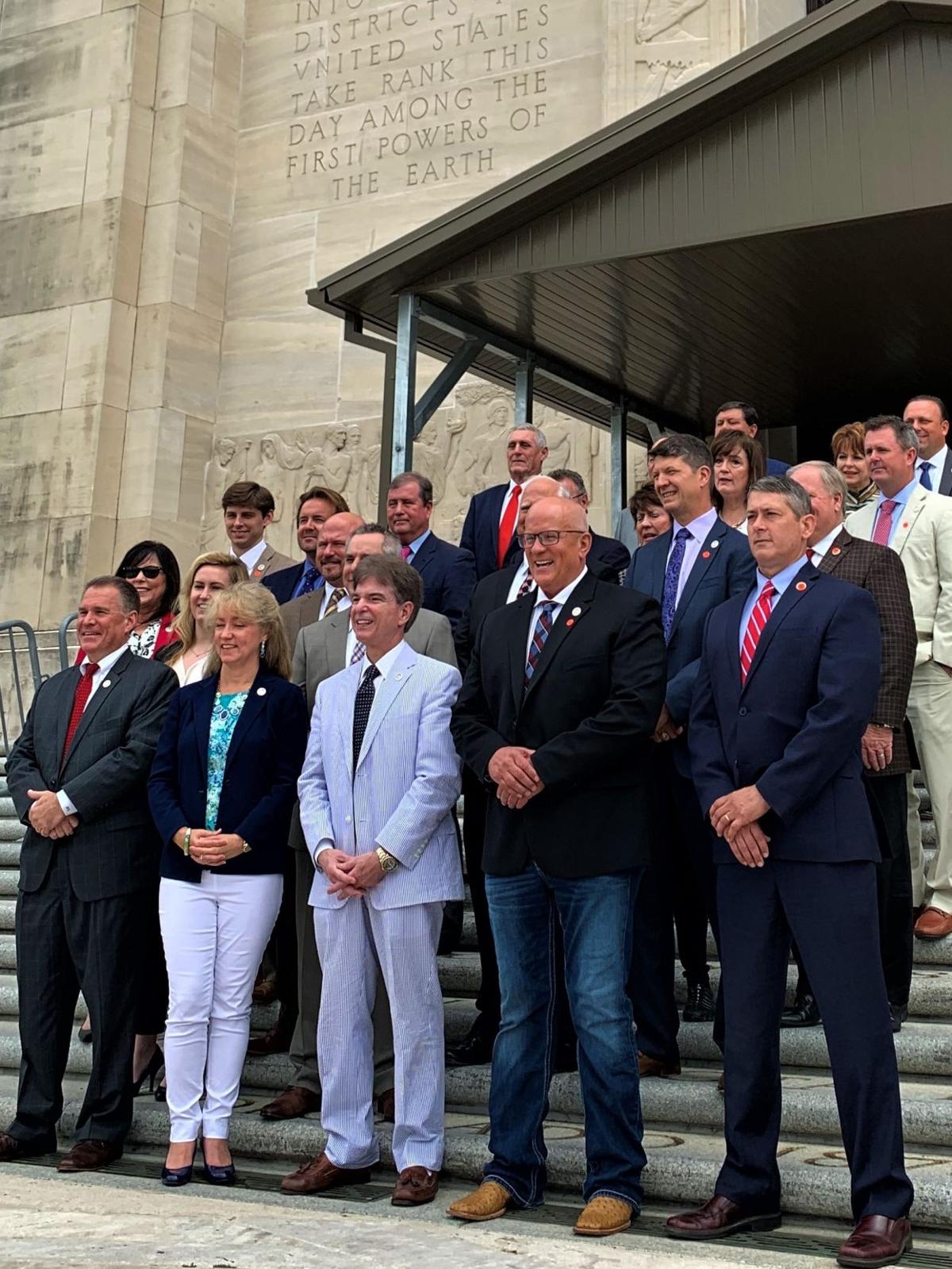 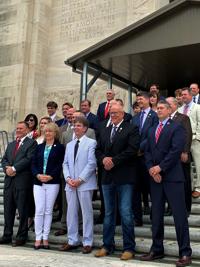 A group of Republican lawmakers, led by Rep. Alan Seabaugh, of Shreveport, pose Thursday, June 25, 2020, on the State Capitol steps as they seek to revoke Gov. John Bel Edwards’ emergency declaration on the pandemic. 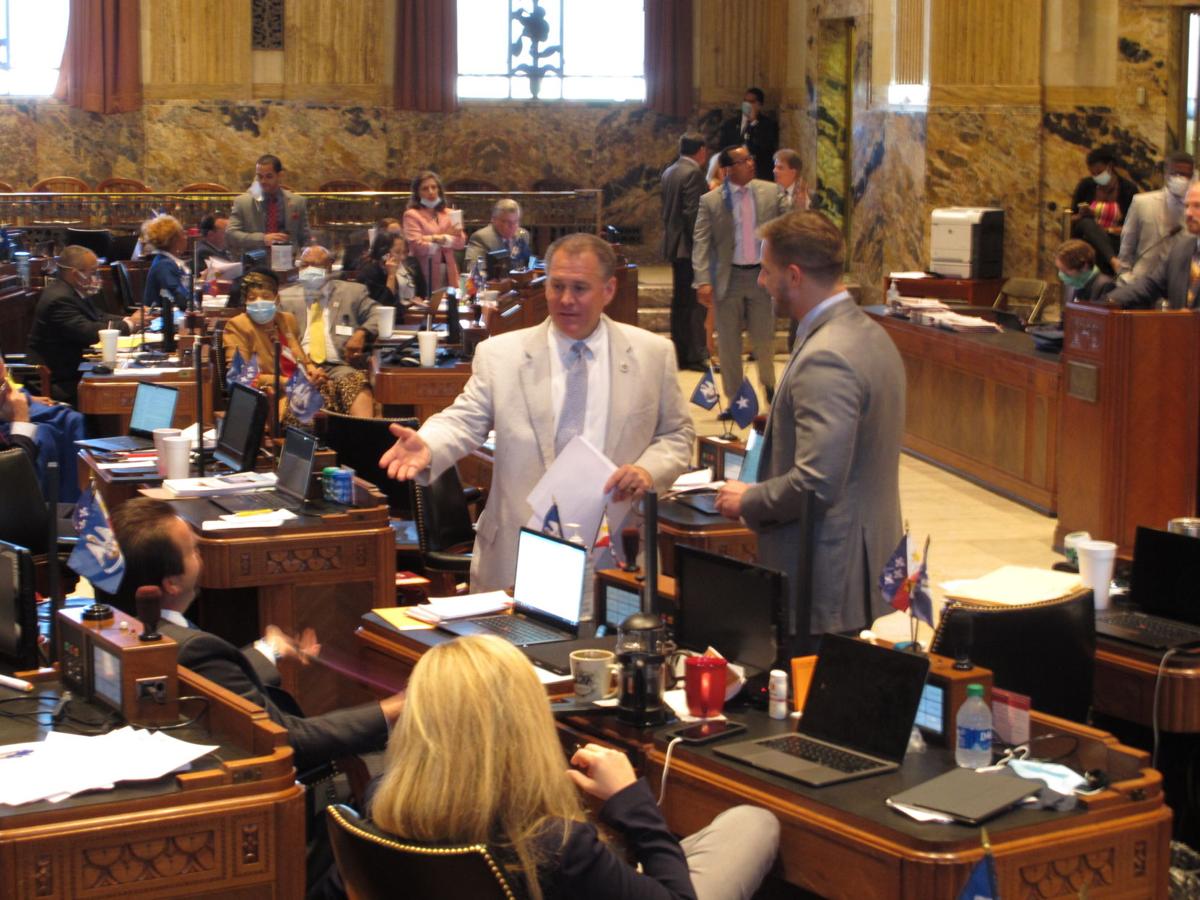 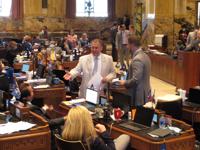 Rep. Alan Seabaugh, R-Shreveport, center, gestures as he speaks to colleagues on the House floor during a long day of bill debate, on Thursday, May 28, 2020, in Baton Rouge.

A group of Republican lawmakers, led by Rep. Alan Seabaugh, of Shreveport, pose Thursday, June 25, 2020, on the State Capitol steps as they seek to revoke Gov. John Bel Edwards’ emergency declaration on the pandemic.

Rep. Alan Seabaugh, R-Shreveport, center, gestures as he speaks to colleagues on the House floor during a long day of bill debate, on Thursday, May 28, 2020, in Baton Rouge.

With cases and hospitalizations rising in Louisiana and its neighboring states, Gov. John Bel Edwards on Thursday signed an order that keeps the state in Phase 2 of reopening for another month, as a group of Republican lawmakers renewed a push to revoke the state’s emergency declaration for the pandemic.

The move by Edwards halts the state’s phased reopening after the state experienced its worst week for the virus since early April, when the state was in a stay-at-home order aimed at limiting the spread. The governor said this week he will reevaluate the extension in two weeks, but the order lasts 28 days.

Louisiana began reopening May 15, and the Phase 2 that began June 5 allows restaurants, barber shops, retailers and a host of other businesses to operate at 50% capacity, with masks required for employees who interact with the public. Bars without food service are limited to 25% capacity.

A group of Republican lawmakers who have flirted with a petition to revoke the state’s emergency declaration since early May revived the effort this week. Several Republicans spoke out against Edwards’ extension on the House floor Thursday, and later more than 20 gathered shoulder to shoulder on the State Capitol steps, without masks, for a photo op.

The petition, circulated by Rep. Alan Seabaugh, R-Shreveport, needs 53 signatures in the House. It would repeal the governor’s public health emergency declaration, which Edwards contends would put federal aid at risk, though Republicans challenge that.

“Quite frankly, it’s gone on long enough,” Seabaugh said of the restrictions.

Mark Cooper, Edwards’ chief of staff, called the photo on the Capitol steps a “publicity stunt” that made the lawmakers look “foolish.” He also pointed to Texas Gov. Greg Abbott, a Republican, halting the state’s reopening amid rising cases.

“Here we are trying to communicate to young people they should wear masks when they’re in groups,” Cooper said. “And here they are taking a picture in the front of the capitol without masks. What kind of message does that send?”

In Louisiana, positive tests for coronavirus have been found in all 64 parishes, according to the Louisiana Department of Health.

The new order signed by Edwards Thursday makes one significant change from the existing Phase 2 guidelines, reinstituting a 250-person indoor gathering limit. Previously there was no limit as long as social distancing was possible.

Some Republican lawmakers have repeatedly criticized the state’s response to the coronavirus. Some even passed legislation that ensures contact tracing, a key part of the state’s strategy to tamp down cases, is voluntary. Others have complained about what they see as a lack of transparency from the governor’s office about his decisions, especially after he made a last-minute decision at the behest of health experts to keep the state’s stay-at-home order in place an extra two weeks in May.

Rep. Danny McCormick, a Republican from Oil City who organized a protest at the Governor’s Mansion over Edwards’ stay-at-home order earlier in the pandemic, said Legislature has “stood by as the Constitution has been shredded.”

“When will we say enough is enough?” McCormick said. “Will that be when COVID-19 trackers come to your house and pulls your family members out of your house?”

A 'signal' that coronavirus is spreading again in Louisiana? Rise in hospitalizations, officials say

As Louisiana experienced the largest one-day surge in coronavirus cases since the height of the outbreak in early April, state health official…

McCormick was apparently referring to contact tracers, who are call center workers hired by the state to call those who have been infected to find out who they came into contact with. Then, they call those people and advise them to isolate and offer resources. The program is voluntary, though the state has spent millions on it as a key part of the response to the virus, to meager results. At last count, fewer than 60% of infected patients were picking up the phone when called.

Rep. Blake Miguez, the chair of the House Republican Delegation, said “momentum is building” on the issue. Seabaugh previously said in early May that he had the required 53 votes but never delivered.

Miguez said people in his district “overwhelmingly” don’t want to wear masks or be saddled with government restrictions like social distancing at restaurants. He also pointed to neighboring states that are opening up faster than Louisiana.

In a Monday announcement that Louisiana will not move to Phase 3 of coronavirus reopening, top state officials illustrated how Louisiana's tra…

Texas was ahead of Louisiana on reopening but Gov. Abbott on Thursday said he would halt the reopening and ban elective procedures in some areas to save space at hospitals amid a rapidly-rising case count in that state.

Health officials in recent days have sounded the alarm about rising cases and hospitalizations in Louisiana. Officials have urged people to wear masks when out to help limit the spread, among other precautions, and have recently ramped up their communications to young people as they account for a rising number of new confirmed infections.

“Some in Louisiana may be done with COVID, but I promise you that COVID is not yet done with Louisiana,” Edwards said in a statement. “I especially want to call on the young people of our state, those ages 18 to 29, to take this illness seriously.”

The number of first-time unemployment claims in Louisiana dipped slightly last week, after two weeks of rising numbers, and those who are cont…