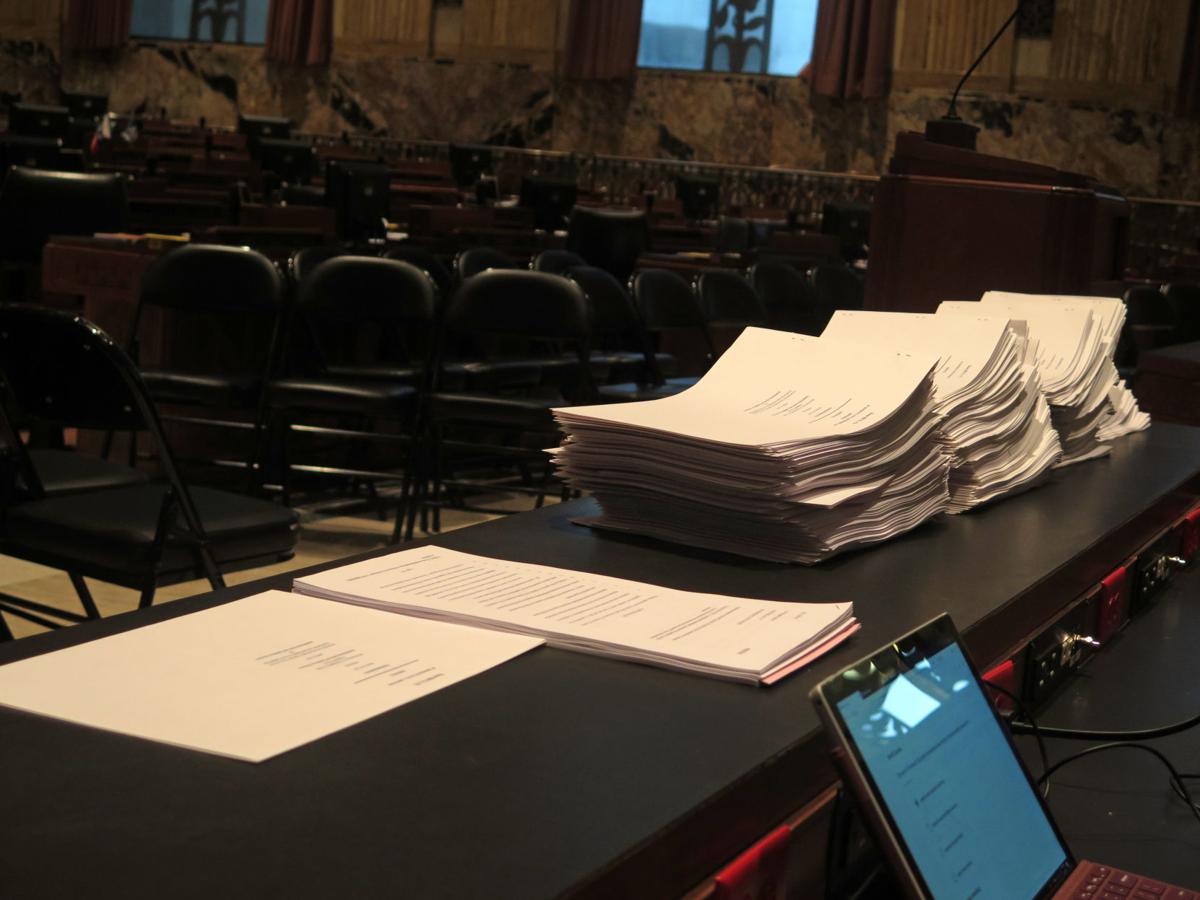 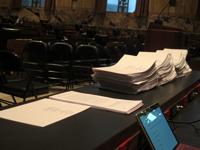 The Louisiana House of Representatives prepares for the 2019 Regular Session of the Louisiana Legislature, which begins Monday, April 8, at 12 noon. 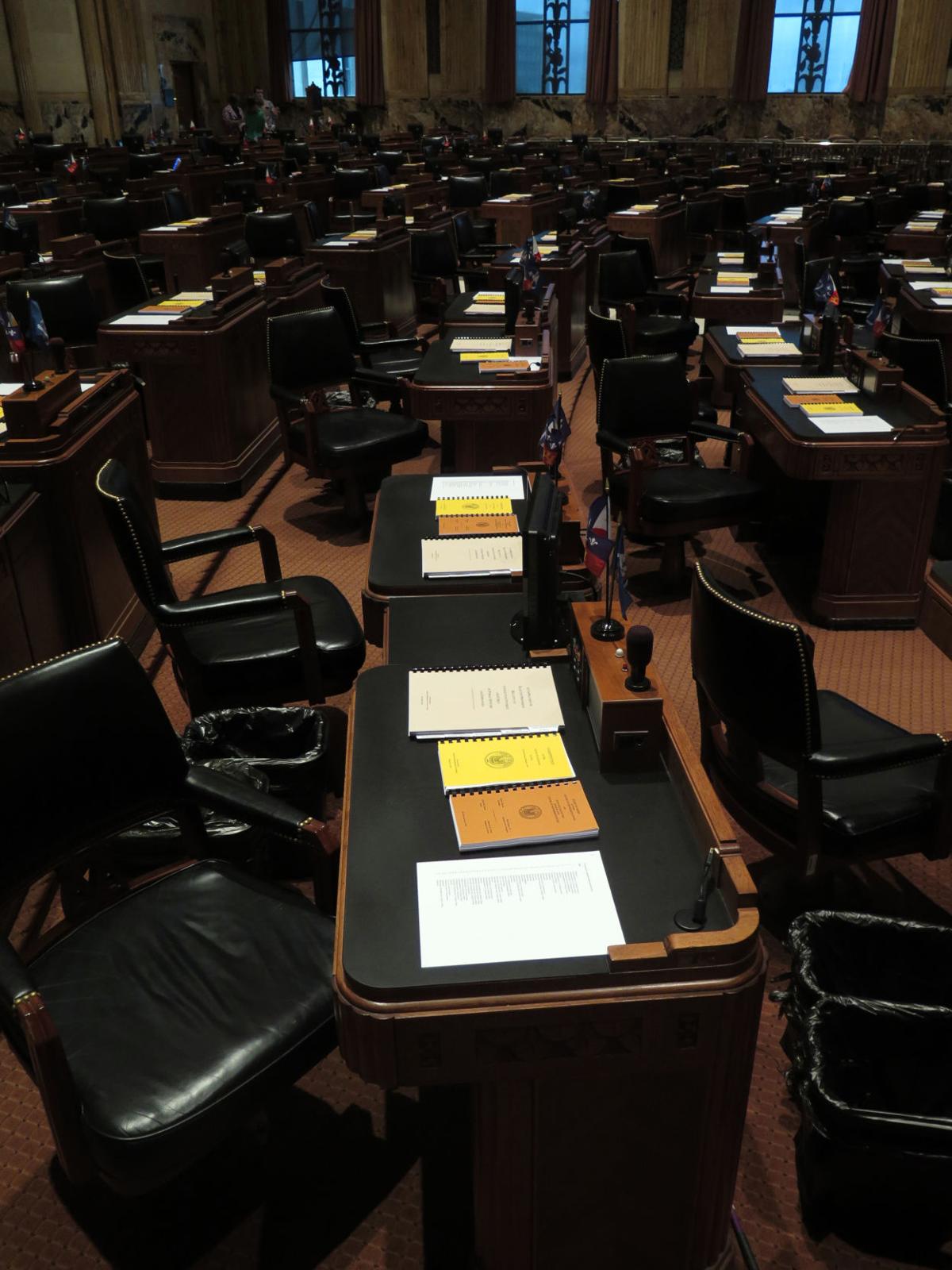 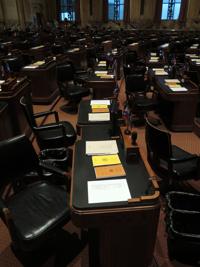 The Louisiana House of Representatives prepares for the 2019 Regular Session of the Louisiana Legislature on Monday, April 8, at 12 noon.

The Louisiana House of Representatives prepares for the 2019 Regular Session of the Louisiana Legislature, which begins Monday, April 8, at 12 noon.

The Louisiana House of Representatives prepares for the 2019 Regular Session of the Louisiana Legislature on Monday, April 8, at 12 noon.

After 10 sessions in three years and few accomplishments, this class of the Louisiana Legislature gathers at noon Monday for its final regularly scheduled session before the fall elections.

This year, legislators won’t be dogged by tough choices of what services to cut in order to balance the budget thanks to a deal that stabilized state finances by increasing sales taxes and rolling back more than 100 tax breaks for seven years.

Instead, lawmakers likely will be balancing competing election-year interests.

None of the 804 bills filed as of Sunday dramatically whack appropriations for the state’s colleges and universities, the Taylor Opportunity Program for Students, health care, and other state services as in years past. But nearly a dozen measures undermine last year’s precisely calculated deal — some by reinstating suspended sales tax holidays, others by diverting some of the proceeds.

The traditional rule among state lawmakers during election-year legislative sessions can be summed up simply: Avoid controversy at all costs —…

Hovering over the session, which ends June 6, is the Oct. 12 election and how votes during the next two months will impact the next six months of campaigning. All 144 seats in the Republican-majority House and Senate are up, and Gov. John Bel Edwards, the only Democratic chief executive in the Deep South, is seeking another four-year term.

“Some people are governing for the greater good and some people are wanting to defeat a governor,” and others want to get re-elected themselves, said House Minority Leader Rep. Robert Johnson, of Marksville.

He noted that 32% of the bodies are term limited — 16 of the 39 state senators, including Senate President John Alario Jr., R-Westwego, and 31 of the 105 representatives, including House Speaker Taylor Barras, R-New Iberia — and many of those officials, including himself, will be looking to run for seats in the other chamber.

“You’ll see a lot of political posturing. It’s politics at its worse, but it is politics,” Johnson said.

Mark your calendars, denizens of the State Capitol, and not in a good way.

Historically, legislators agree not to force embarrassing votes on their colleagues in the last session before the election. That gentlemen’s agreement has gone out the window as Louisiana embraces the hyperpartisan style of Washington politics. All sorts of electorally uncomfortable issues are on tap.

Take the death penalty, for instance.

Edwards, like many politicians, avoids articulating his personal views other than to promise to adhere to the law.

Baton Rouge Republican Sen. Dan Claitor, a former prosecutor, and New Iberia Democratic Rep. Terry Landry, a former Louisiana State Police superintendent, are asking legislators go on record to abolish capital punishment in Louisiana for going against the teachings of the Catholic Church and for costing taxpayers millions but producing only one execution — a volunteer — in the past 17 years. Meanwhile, Hammond Republican Rep. Nicholas Muscarello’s House Bill 258 would address one of the reasons that has stalled executions by making secret the information about the manufacture and supply of the capital punishment drugs. Many of the companies that supply the lethal injection drugs don’t want their products associated with executions.

Municipal officials, school board members and parish police jurors are expected to oppose Houma Republican Rep. Tanner Magee’s House Bill 57, which would centralize sales tax collections as many states already do and as the U.S. Supreme Court strongly suggested when opening internet sales to retail taxes. Much of the business community favors bypassing local collectors and going straight to the state, but local politicians, who carry much sway back in legislative districts, balk at giving up direct control of one of the very few sources of revenues Louisiana allows local jurisdictions.

Treasurer John Schroder wants to help revenue-strapped local governments by directing half of the unclaimed property that’s not reclaimed by residents toward a fund that local governments can tap for low-cost loans. Speaker Barras is handling the proposed constitutional amendment, House Bills 291 and 292.

Legislators also could be asked to vote touchy issues, such as, allowing more local control over the homestead exemption; allowing Louisiana to be the final state needed to ratify, after 47 years, the Equal Rights Amendment to the U.S. Constitution; raising the legal age to smoke from 18 to 21 years; lessening penalties for marijuana possession; gradually increasing the tax on gasoline by $480 million a year; automatically registering voters when they get a driver’s license; removing the term “milk” from nondairy products like the popular Almond Milk and Oatmilk; and taking another stab at establishing a minimum wage above the $7.25 per hour set 10 years ago.

The Louisiana Legislature is convening again in five weeks, and while the focus of the 2019 regular session will be on finances, legislators a…

Successful legislation is always the product of compromise. Though competing partisan measures differ in their details, both paths suggest that the state’s 50,000 teachers, who make an average $50,000 a year, will get a pay raise.

"There is just a broad consensus in the Legislature that we want to give the teachers a pay raise," House Education Committee Chairwoman Rep. Nancy Landry, R-Lafayette, recently told The Advocate.

Edwards has made his No. 1 priority pay raises for teachers and support staff — groups who have been among his most ardent supporters. He wants $1,000 across the board for teachers and $500 for support personnel.

No 'battle' expected for Louisiana teacher pay hikes, but one is brewing over public school aid

Gov. John Bel Edwards' bid to boost teacher pay by $1,000 per year is winning wide support both inside and outside the Louisiana Legislature.

Henry didn’t include a $39 million, or 1.375% of the $3.85 billion state schools funding, some of which would pay the additional pensions and health insurance costs that accompany higher salaries. Some House Republicans contend the increase would be too much on top of teacher raises and some of the money would be better spent on early childhood education.

Another contest is shaping up over how best to protect people with pre-existing health conditions should the U.S. Supreme Court overturn the Affordable Care Act in a lawsuit that Republican Attorney General Jeff Landry supports, and Edwards does not. But both are championing competing bills to do just that.

Senate Bill 173, sponsored by Sen. Fred Mills, a Breaux Bridge Republican who chairs the Senate Health committee, would give the insurance commissioner significant sway over the definitions for what would be considered essential benefits.

House Bill 237, by Rep. Chad Brown, a Democrat from Plaquemine, would give the insurance commissioner less latitude to work out some of the details of how the state would protect people with pre-existing conditions.

Some legislators would like to see the money go to early childhood education programs, others say the dollars should go to gambling addiction programs.

How sports betting, early childhood education in Louisiana might become an unlikely alliance

The sponsor of sports betting legislation said Friday he is open to dedicating revenue from the enterprise for early childhood education, whic…

Martiny doesn’t care as long as the bill passes. "If the consensus is that is where the money should go, I am perfectly fine,” he said.

First on the agenda, however, will be figuring out the state budget.

The Revenue Estimating Conference — comprised of the Senate president, House speaker, governor and an independent economist — must unanimously agree on how much revenues the state can reasonably expect in coming months. That’s the number on which spending plans are based. Three of the members agree with estimates that the state will take in more money, while the House speaker, Barras, does not.

Rather than drafting an executive budget proposal — the document off which legislators make a $30 billion state budget for the fiscal year beginning July 1 — using the last amount confirmed by the REC, Edwards submitted a spending plan based on the new numbers. New Orleans Rep. Walt Leger III, the highest-ranking Democrat in the House, submitted House Bill 103, which is based on Edwards’ proposal and would spend about $135 million more.

Henry filed House Bill 105 that spends only the money last recognized by the REC in June 2018. He started off hearing only his bill, saying if additional revenue is recognized eventually, that money will be amended into the legislation.

Our Views: Don't expect much from same-old Legislature

There will be a few new faces in the Louisiana House of Representatives when the Legislature beings its regular session Monday. And therein li…

Neither measure meets the rules that designate an official budget proposal, House Bill 1.

The attorney general, who rarely misses an opportunity to tweak Edwards, issued an opinion accusing the governor of creating a constitutional crisis by not proposing an executive budget proposal using the REC’s June numbers.

House Majority Leader Rep. Lance Harris, of Alexandria, who sought the Landry’s opinion, said last week that he didn’t anticipate going to court over the issue.

“We have an official forecast, the one from June 2018. Those are numbers we can use,” Harris said. “And that’s what’s going to happen until the REC decides different numbers can be used.”

Barras has indicated in statements before fiscal committees that his worries that revenues would remain stable enough to sustain a higher estimate might have been alleviated after seeing the collections during his four-month delay. The REC meets again Wednesday.

Some bills likely to attract attention during next two months:

In all the reviews of the 2017 Legislature, the consensus is that the lawmakers failed to do the one thing they need to do: address the "fisca…