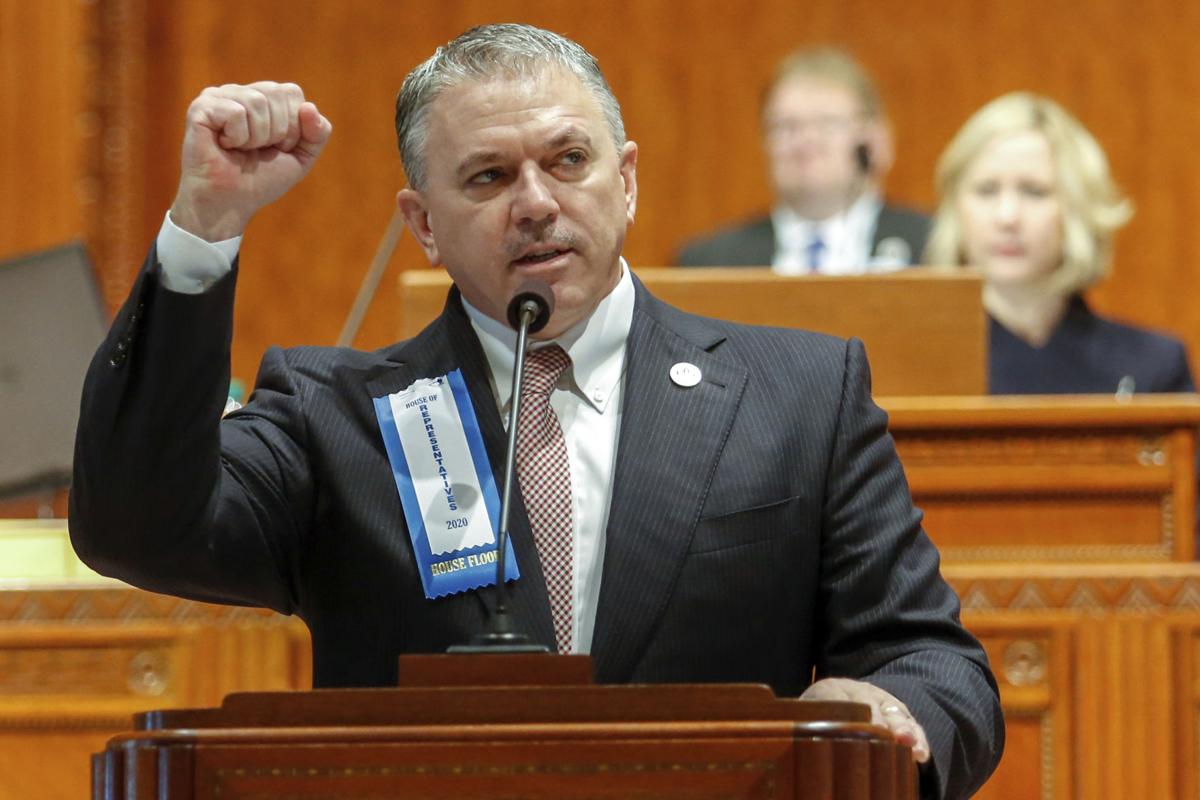 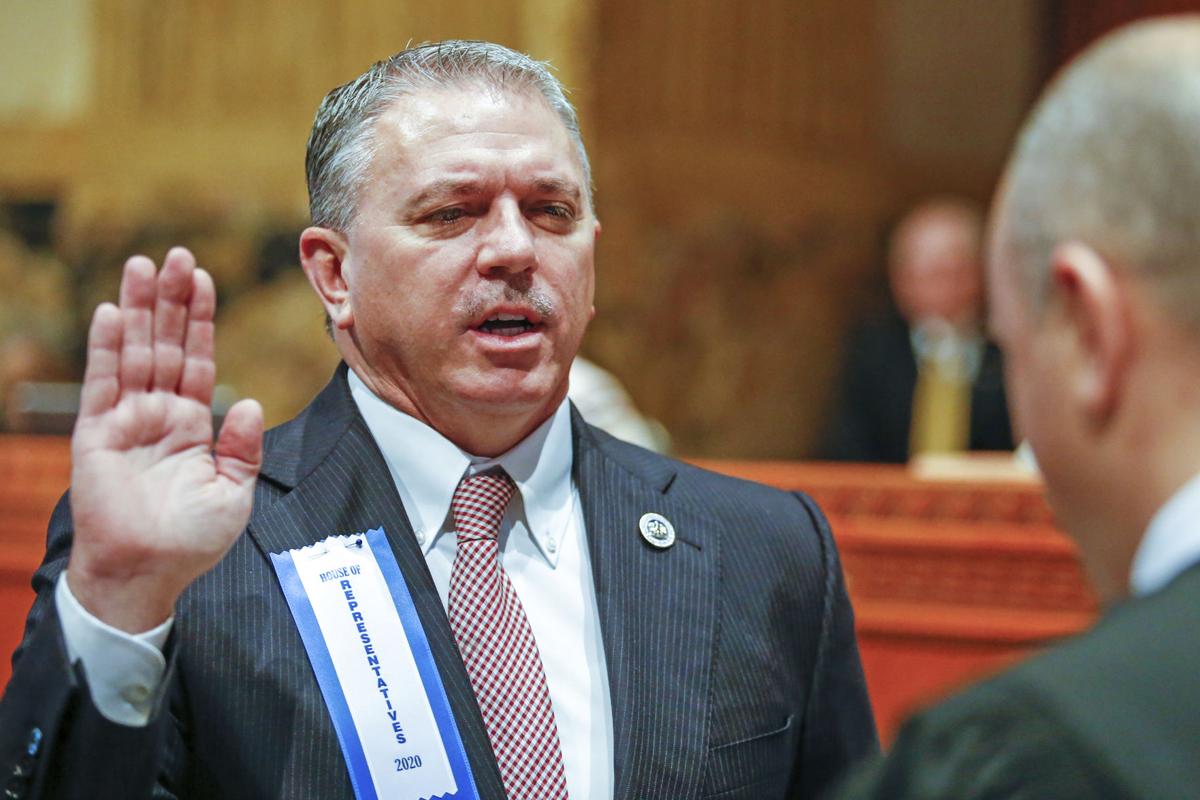 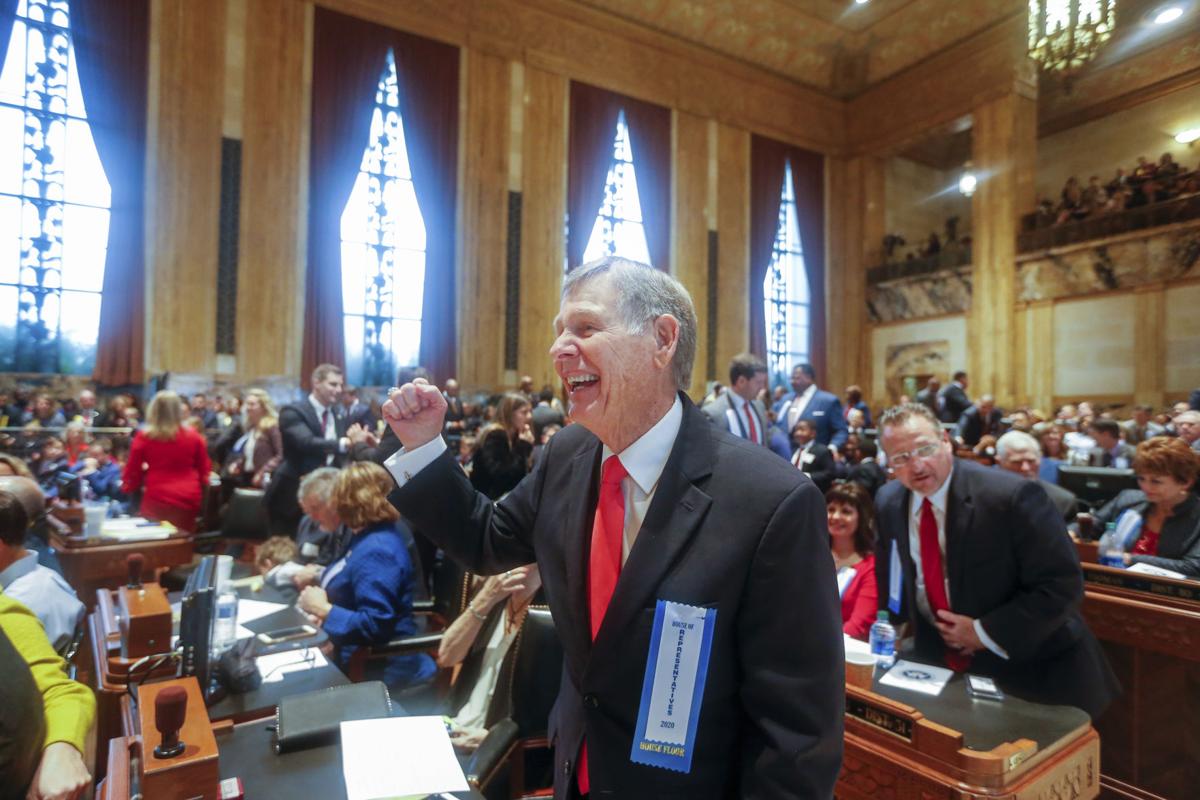 Francis Thompson, D-Delhi, reacts after being in sworn in with other members of the Louisiana House of Representatives at the state Capitol in Baton Rouge, La., Monday, Jan. 13, 2020. (AP Photo/Brett Duke) ORG XMIT: LABD111 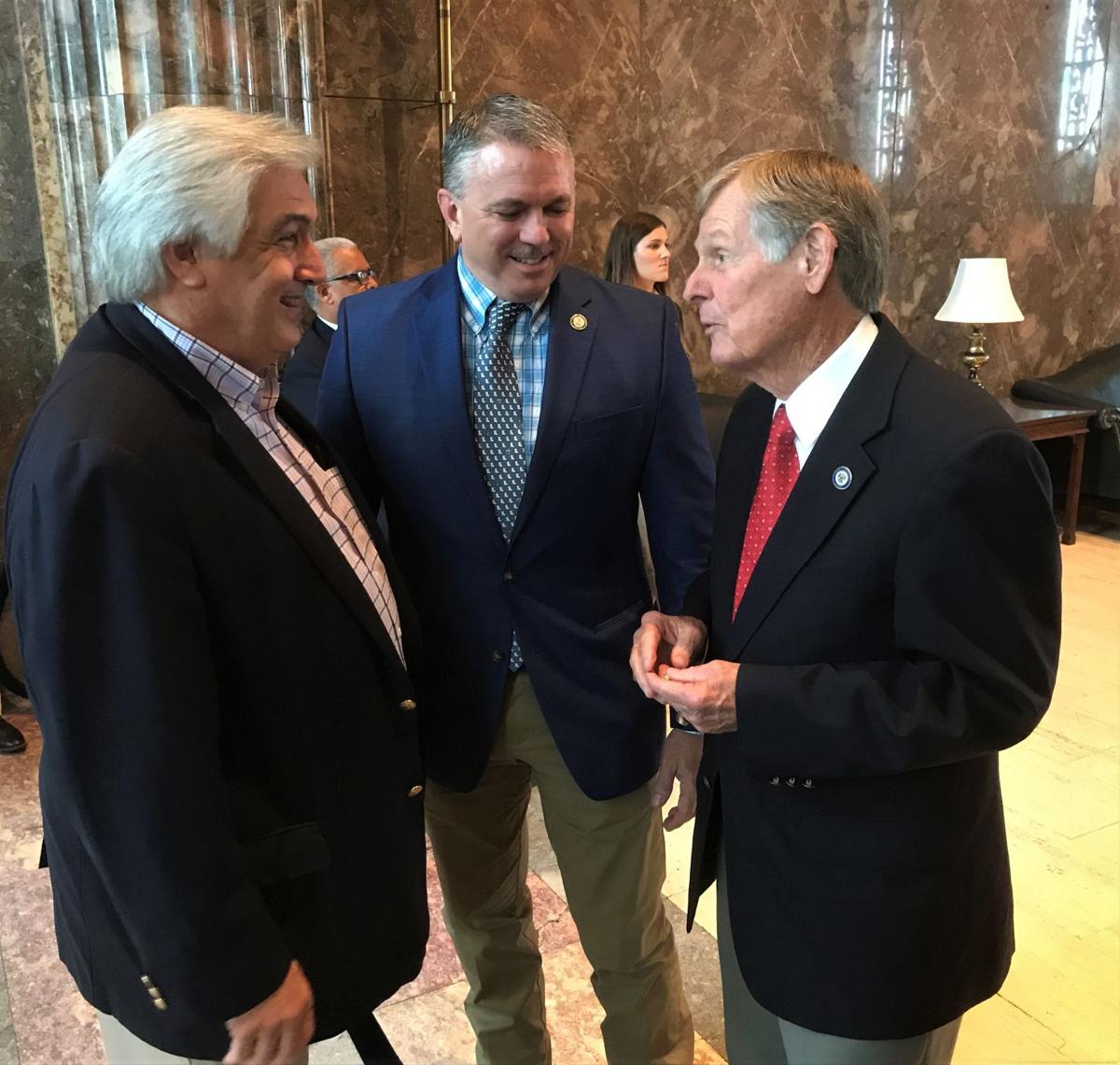 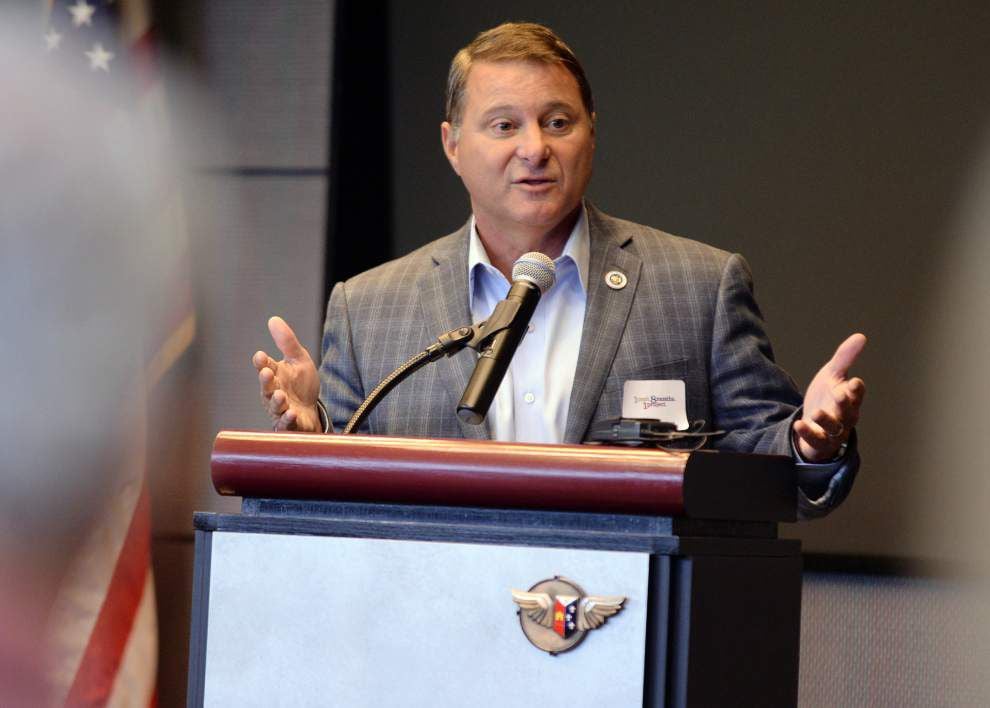 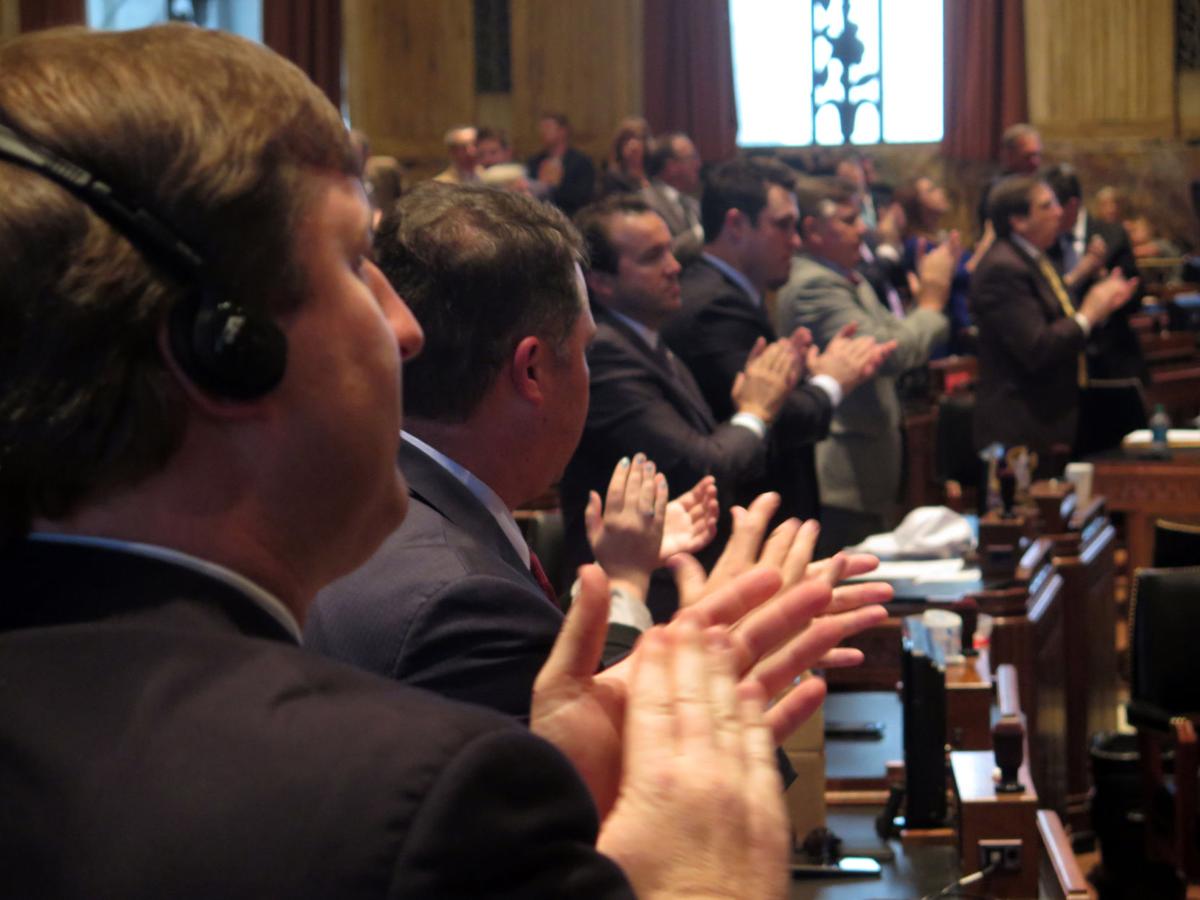 After praising his leadership, the Louisiana House of Representatives gave Speaker Taylor Barras a standing ovation in the final minutes of the special session on Friday, June 16, 2017. The New Iberia Republican had rough couple months with criticism from lobbyists and the largest newspaper in his region as well as the Legislature being unable to pass a state operating budget during the regular session.

Francis Thompson, D-Delhi, reacts after being in sworn in with other members of the Louisiana House of Representatives at the state Capitol in Baton Rouge, La., Monday, Jan. 13, 2020. (AP Photo/Brett Duke) ORG XMIT: LABD111

After praising his leadership, the Louisiana House of Representatives gave Speaker Taylor Barras a standing ovation in the final minutes of the special session on Friday, June 16, 2017. The New Iberia Republican had rough couple months with criticism from lobbyists and the largest newspaper in his region as well as the Legislature being unable to pass a state operating budget during the regular session.

A divided Louisiana House on Monday installed Gonzales Republican Clay Schexnayder as speaker, capping a months-long, contentious battle for the post and delivering a blow to conservative leaders who sought to put state Rep. Sherman Mack in the position.

Schexnayder, a 50-year-old former race car driver and mechanic, was propelled to office by the Democratic caucus, which voted as a bloc for him along with a contingent of Republicans who stuck with him despite attacks lobbed by a PAC run by Attorney General Jeff Landry and U.S. Sen. John Kennedy.

Assuming an historic number of seats in the Louisiana House Monday, Republican leaders pushed the GOP representatives to coalesce behind Mack, a 47-year-old lawyer from Albany. Landry and Kennedy had urged the party to decide the speaker's race without consulting Democrats, who hold 35 seats. Neither happened.

In the state Senate, Republican Sen. Page Cortez, a 58-year-old Lafayette furniture retailer, was unanimously picked as Senate president in a much quieter affair. Cortez succeeds outgoing state Senate President John Alario, R-Westwego, who served in the Legislature for 48 years.

The Louisiana Legislature is scheduled to convene on March 9.

In his speech upon winning the election, Schexnayder railed against "outside influences" and praised the House as an independent body. He slammed "special interests" who he said tried to divide the body with "Washington-style" politics.

"This is our moment to restore our faith of the people in this state," Schexnayder said. "We will show them that 105 people, men and women from different backgrounds from different parties and different parts of this state can be trusted to stand together against outside influences and stand for a prosperous Louisiana for our families and for generations to come."

The 23 Republicans who voted for Schexnayder included many who have been willing to work across the aisle, while many conservatives, party leaders and freshmen sided with Mack.

Gov. John Bel Edwards, a Democrat who opted not to nominate a Democratic speaker candidate after seeing his pick rejected four years ago, said, "by rejecting partisan rancor and those who seek to turn Baton Rouge into Washington, D.C., we can continue Louisiana's stability and make progress that will allow us to continue on a course of prosperity."

Last month, state Rep. Sherman Mack became the official House GOP-endorsed candidate for speaker, but the race has only heated up since then, …

The House voted 60 to 45 for Schexnayder after closed-door negotiations that stretched through Monday morning. Democrats were expected to win an increased number of chairmanships in the House in exchange for their support. Two Democrats, Reps. Patrick Jefferson and Cedric Glover, said Sunday they would break with the party and side with Mack in a deal that would have given Jefferson the No. 2 spot, but both voted with their party on Monday to give Schexnayder the win.

"The Louisiana House of Representatives did not yield to the nonproductive agenda of the far right of the Republican party to exclude duly elected Democratic members of the House from the legislative process," House Black Caucus Chairman Randal Gaines said. "We are proud of our Democratic members who stuck together in the cause and we are also proud of our Republican colleagues for their courage in standing against outside influence."

Democrats met late Sunday for several hours in the basement of the State Capitol to discuss the race, and Democratic leaders on Monday morning said they had the votes lined up to deliver the race to Schexnayder if the caucus stayed together. In return, Democrats are expected to get more committee chairmanships this term than during the past one, when they had four.

Houma Republican Rep. Tanner Magee, a supporter of Schexnayder, won election as speaker pro tem after no challenger emerged. During the past term, the pro tem, the No. 2 position in the House, was held by Democratic Rep. Walt Leger III, Edwards' pick for speaker who was rejected by the Republican House.

In December, Mack won the endorsement of the House GOP caucus, but enough Republicans stayed with Schexnayder that neither candidate had enough support from their own party to win outright. That meant both had to reach out to Democrats to secure the 53 votes needed.

Republicans assumed an historic number of seats when members were sworn in Monday, taking control of 68 seats, near a 70-vote supermajority.

While governors for decades hand-picked legislative leaders, Republicans four years ago rejected Edwards’ Democratic pick and installed one of their own, Taylor Barras, R-New Iberia, into the position. This time, Edwards did not back a Democrat and none ran for the position.

Both Mack and Schexnayder said if they won their top priority would be tort reform, long a priority of the business community to make it more difficult for people to sue insurance companies.

In the much less contentious race to lead the Senate, Cortez was nominated by two earlier rivals for the job: Sens. Rick Ward III, R-Port Allen, and Ronnie Johns, R-Sulphur. "It became obvious that one man emerged from our group that convinced enough of this body that he could and should lead us," Johns said.

They also moved to suspend the Senate rules, thereby allowing the nominations and election to be held publicly.

State Sen. Page Cortez, a Republican from Lafayette, has secured enough votes among his colleagues to become the next state Senate president, …

He will lead the Senate in negotiations with the governor and speaker of the House and decide who leads and fills Senate committees.

Cortez said after the organizational ceremony that he plans to announce committee assignments in the next week or so, with a priority on the Senate Finance Committee since Louisiana's Joint Legislative Committee on the Budget is set to meet at the end of the month.

The House and Senate also elected women to the key staff positions in each chamber. The House elected Michelle Fontenot as clerk and the senators tapped Yolanda Dixon as Senate secretary, the first time either position is held by a female. Senate Secretary Glenn Koepp and House Clerk Alfred “Butch” Speer both are retiring after nearly half century when each man arrived at the State Capitol.

The two administrative positions oversee the staffs and advise the elected leadership on the rules and traditions. They also are the ones reading the bills aloud and progressing the agenda when the full Senate and full House meet.

Louisiana governor's inauguration: Live video and a look at what John Bel Edwards faces this term

A few hours before the LSU football team faces Clemson in the Mercedes-Benz Superdome for the national championship Monday night, some of Loui…