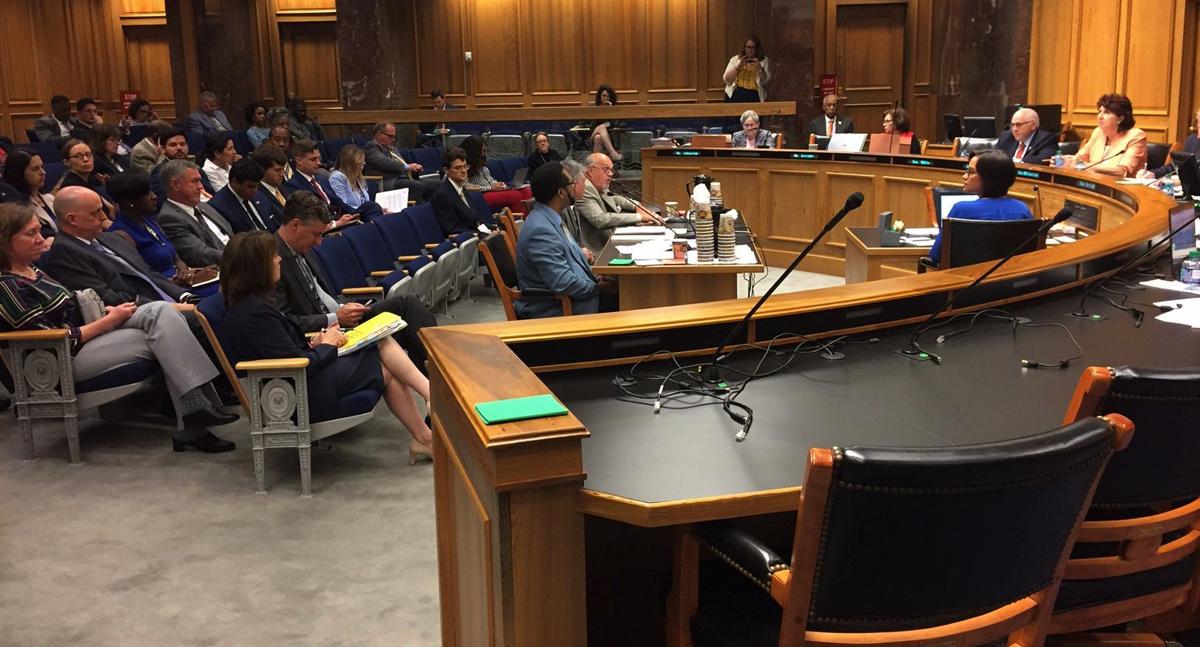 Louisiana Federation of Teachers President Larry Carter, foreground, Shane Riddle, director of legislative affairs for the Louisiana Association of Educators, middle and Mike Faulk, executive director of the Louisiana Association of School Superintendents urge the Senate Education Committee on Thursday, May 2, 2019, to approve a $39 million hike in state aid for public schools.

Louisiana Federation of Teachers President Larry Carter, foreground, Shane Riddle, director of legislative affairs for the Louisiana Association of Educators, middle and Mike Faulk, executive director of the Louisiana Association of School Superintendents urge the Senate Education Committee on Thursday, May 2, 2019, to approve a $39 million hike in state aid for public schools.

The Senate Education Committee approved Gov. John Bel Edwards' public schools funding plan Thursday, including a controversial $39 million hike for classrooms that puts the Louisiana Senate on a collision course with the House.

The vote was 6-1, and the governor thanked committee members a few hours later.

The measure, Senate Concurrent Resolution 3, heads to the Senate floor but may first face a review by the powerful Senate Finance Committee.

The election-year legislation includes $1,000 teacher pay raises and $500 annual boosts for support workers. The raises, which enjoy bipartisan support, are the governor's key priority for the 2019 session.

"Teachers have the important job every day of preparing our students to become tomorrow's leaders," Edwards said in a statement.

"They should be compensated accordingly, but for far too long that has not been the case," he said. "Today committee members took the necessary step to help change that."

Backers said both parts of the pay package are long overdue.

"This is for the working people of this state," said Sen. Gerald Boudreaux, D-Lafayette and a member of the committee.

However, the issue is shaping up as another battle over school aid between senators and the governor on one side and the House on the other.

House Republican leaders insist the state cannot afford the $39 million increase for schools, which would be just the second of its kind in the past decade amid state budget problems.

The House Education Committee last month returned the same plan to the state Board of Elementary and Secondary Education, which approved its proposal in March. That panel asked BESE to revamp its proposal and take out the $39 million increase.

BESE is set to hold a special meeting on the issue on Tuesday at 9:30 a.m.

The lone "no" vote in committee was cast by state Sen. Conrad Appel, R-Metairie.

Appel, like key House leaders, said he is concerned that the funding plan would exceed available state dollars, and could threaten teacher pay raises that enjoy bipartisan support.

"The whole thing could blow up," Appel said.

Barry Dusse, director of the governor's Office of Budget Planning, said recent amendments to the governor's budget proposal would allow the state to pay for the $39 million boost.

No 'battle' expected for Louisiana teacher pay hikes, but one is brewing over public school aid

Gov. John Bel Edwards' bid to boost teacher pay by $1,000 per year is winning wide support both inside and outside the Louisiana Legislature.

Dusse told the Senate committee that savings in the state Department of Health, and $15 million in cuts to other state agencies, would make the package affordable.

The House Appropriations Committee on Monday is set to begin its final markup of the $30 billion state spending plan, including education dollars.

A debate in the full House may also take place next week.

Aside from Appel's questions no one spoke against the funding outline.

"Our teachers deserve a raise," said Belinda Davis, the mother of three public school children in Baton Rouge and president of One Community One School District. "And our children deserve that more money be spent in the classroom."

BESE on Tuesday may opt to stick by the same funding levels that it approved in March, which totals $3.85 billion for the 2019-20 school year.

"There is going to be a discussion," Gary Jones, president of BESE, told the Senate Education Committee. "At this point the issue is still pretty cloudy to us."

"We put together a really good MFP," Jones told senators.

State Superintendent of Education John White told the panel BESE's request was made before the all-important Revenue Estimating Conference settled on how much new money – $119 million – the state has to spend starting July 1.

That figure is about $20 million below what Edwards was hoping would be recognized.

"We know we are going to be $20 million short," Appel said. "Clearly something would not get funded."

He said if the school financing blueprint is over budget "it will get killed and there will be no teacher pay raise."

Dusse's comments were aimed at easing GOP concerns, and came just moments before the resolution won lopsided approval from the Republican-controlled committee.

The Legislature can approve or reject BESE's request but cannot change it.

The session ends on June 6.

LFT President Larry Carter said that, without the $39 million increase, teachers would be forced to keep spending for school supplies and other costs, cutting into raises that officials say will be well under $1,000 by the time they reach paychecks.

Teachers are paid an average of $50,000 per year, which is below the regional average.

Edwards, a Democrat who is seeking a second term this year, has said this year's plan is the first of three aimed at reaching the regional benchmark.

Guest column: La. education at a tipping point; will lawmakers push it over the edge?

For the past decade, some members of the Louisiana Legislature have overlooked their responsibility to the children of the state. The result o…