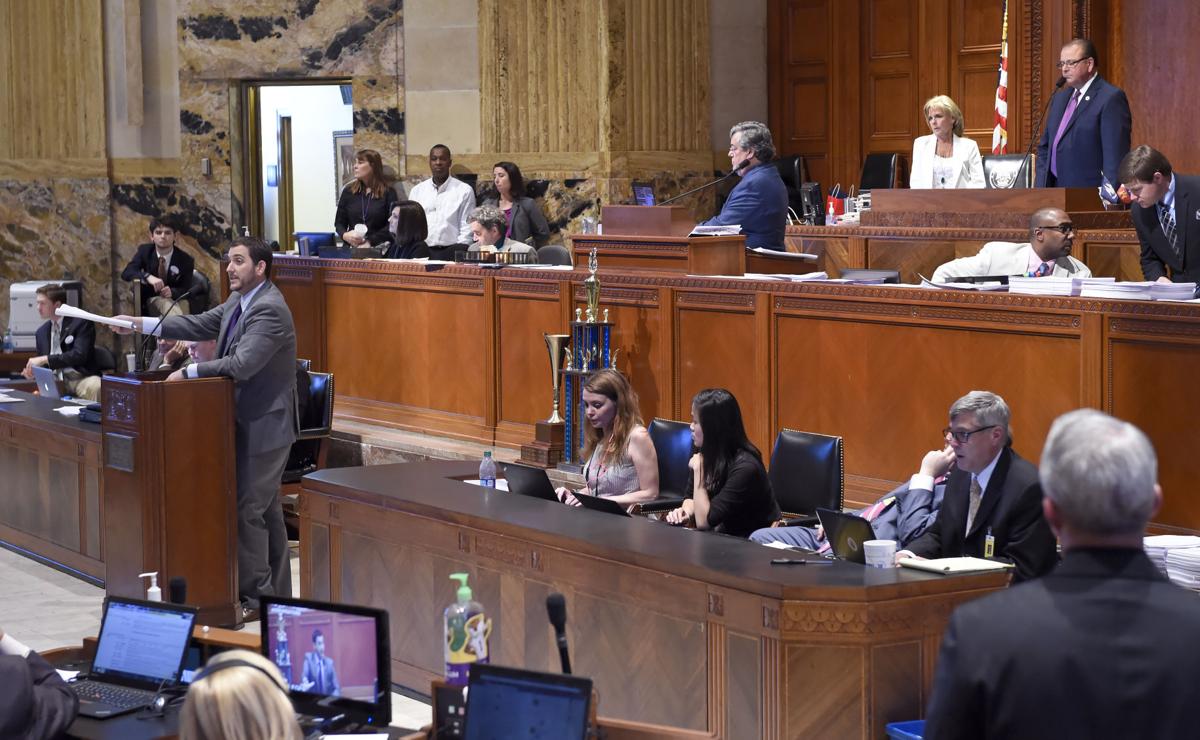 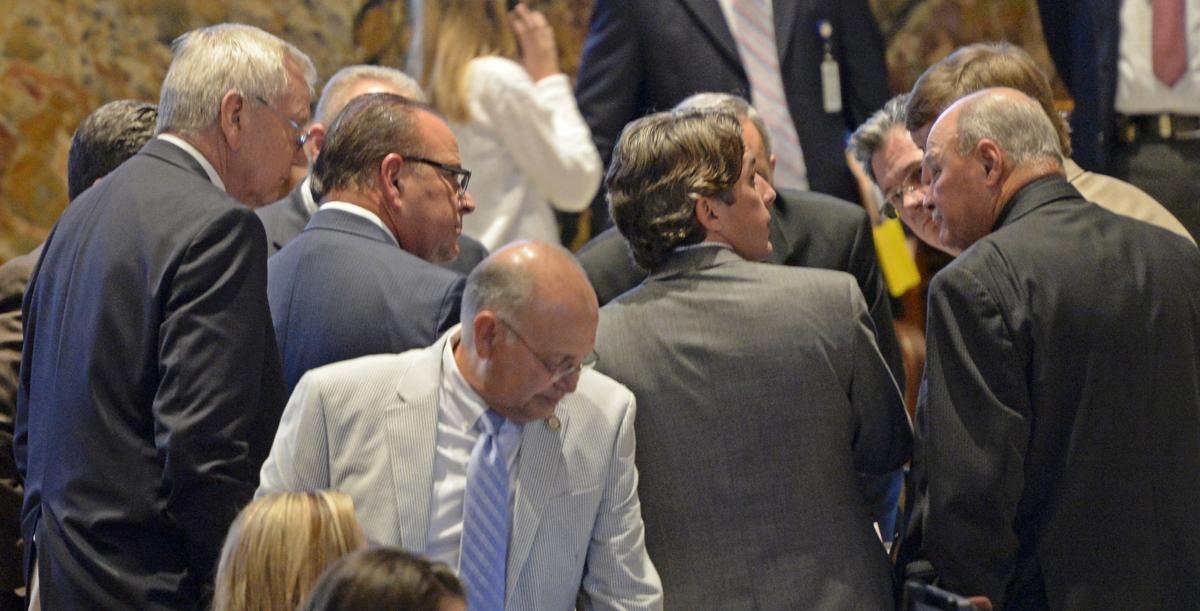 House Appropriations Committee Chairman Rep. Cameron Henry Jr., R-Metairie, second from right, looks at the clock along with House Speaker Rep. Taylor Barras, R-New Iberia, second from left, as they huddle with House members on the floor in the closing minutes during the last day of the regular legislative session Thursday June 8, 2017, in Baton Rouge, La..

House Appropriations Committee Chairman Rep. Cameron Henry Jr., R-Metairie, second from right, looks at the clock along with House Speaker Rep. Taylor Barras, R-New Iberia, second from left, as they huddle with House members on the floor in the closing minutes during the last day of the regular legislative session Thursday June 8, 2017, in Baton Rouge, La..

A day after the Louisiana House dramatically ended the legislative session with no budget in place for the coming fiscal year, leaders were still processing what had happened in the final minutes of the session and how they will move forward in an increasingly divisive atmosphere.

Work on the budget is set to resume on Monday in a special session that is only being held because of a breakdown in negotiations between the House and Senate that were meant to result in a final agreement on a budget that will begin July 1.

House Republican leaders maintain that they had tried to negotiate on the budget in good faith, but the Senate was unwilling to back away from spending all of the money that is projected to be available in the coming year.

"There was a disagreement, and although we tried diligently on House side to reach an agreement, it didn't happen and now we find ourselves going back to work," said House Majority Leader Lance Harris, R-Alexandria. "There could have been something in the middle that everyone could have come to."

"The House put party politics ahead of the needs of Louisiana," Edwards told reporters moments after the session ended.

Rank-and-file members, meanwhile, have been vocal in their frustration over the gridlock that has prompted the Legislature's fourth special session in less than two years to address budget issues.

"There's a billion dollar fiscal cliff a year away," said Rep. Barry Ivey, R-Central. "It blows my mind that we get caught up in the rhetoric acting like we are being so responsible right now because we're not going to spend 100 percent."

Ivey said he won't be taking part in the special session. He's asked for a leave of absence from the chamber for two weeks so that he can focus on efforts related to flood recovery and his business. It's unclear how many other members don't plan to return to Baton Rouge to hash out a final agreement and avoid a government shutdown.

No budget deal for Legislature; why governor calls failure 'epic'; what happens next

After a dramatic breakdown in budget negotiations, the Louisiana Legislature finds itself in…

The latest budget battle came down to a disagreement over about $50 million and process.

The House-approved version of the budget didn't spend $206 million that the state's revenue estimating panel has recognized. The Senate-approved version used that money to spend more on higher education, corrections, health care and social services and give a modest pay raise to some state employees.

During the course of budget negotiations on Thursday, House leaders had lowered the amount that they sought to set aside to $100 million. The Senate, meanwhile, wanted to move all the money through the budgeting process, but instruct the Edwards administration to cut $50 million in spending, which would serve as a cushion for any potential deficit. House leaders balked at the proposal, insuring a special session would be needed to finalize a budget for the coming year.

The move set off a chaotic 30 minute scene on the House floor in the countdown to the sessions end.

Members, many of them on their feet, yelled at Barras. Senators anxiously paced the aisles. Lobbyists, reporters and others packed the chamber's designated public areas.

Rep. Walt Leger III, a New Orleans Democrat and Speaker Pro Tempore, tried three separate procedural moves aimed at getting the chamber to take up the Senate's version of the budget or the Senate's compromise proposal that appropriated all of the money available but directed $50 million wouldn't be spent.

House Appropriations Chair Cameron Henry, a Metairie Republican who carries the budget bill, had refused to bring it up for a vote without a deal in place that was more favorable to the House leadership's position.

As Barras, House staff and several members debated objections to Leger's procedural proposals, the chamber ran out of time. The budget never came up for a final vote.

"I felt pretty confident that there were more than enough people to pass the Senate version of the budget, and I wanted us to have a vote on it to determine where we were," Leger said Friday.

Leger said that he would have preferred that the House take a vote, even if it rejected a budget bill, rather than ending without trying.

"I really truly believe the better outcome would have been to have a vote even if it failed," he said. "At least the Senate could be confident that we really didn't have the votes."

Leger described the current environment in the House as "much more heated, much more difficult to build consensus" than when he first joined the chamber in 2008.

Barras, meanwhile, said he was disappointed with the governor's comments about the chamber and the Senate's insistence that the breakdown was due to the House.

"I'm not trying to poke anybody in the eye. We are trying to put two different ideologies together," he said.

Both the House and Senate have Republican majorities, but the House is more conservative and the Senate is more closely aligned with Edwards.

Barras said he thought it would be unfair to bring up a proposal that was not fully presented to the body. The House had previously rejected the Senate version of the budget and the details on the compromise proposal, which was contained in a conference report, had come from the Senate.

"It is highly unusual," Barras said of Leger's attempts. "I didn't feel in the last 15 minutes was when we should vote on an item uninformed."

"I just wasn't going to allow the body to be subjected to that," he added.

He and other House leaders have repeatedly described the hours of back-and-forth between the two chambers as the House agreeing to drop its number lower but the Senate refusing to back away from spending all money available.

Barras said that he had met with agency heads to talk about potential cuts and he felt comfortable with the $100 million figure.

"Four or five spreadsheets later, and 10 or 12 discussions later, the governor never came off of 100 percent and neither did the Senate," Barras said.

He said that he didn't believe that a resolution that instructing that some money to not be spent was enforceable nor sent a strong enough message.

"Our thought was that wasn't a tight enough restriction," Barras said.

Barras said his concern about the state's budget projections is legitimate and his goal is to prevent a mid-year cut later on.

"We realize it's a philosophical difference in thinking," he said. "We just could not get the Senate to agree to it."

Rep. Pat Smith, a Baton Rouge Democrat who serves on the Appropriations Committee, said she supported the Senate plan because without appropriating the money, it would have gone to surplus funds that cannot be spent without approval of the Legislature.

"To me it was not acceptable what they were trying to do," she said.

She said she was "flabbergasted" by the scene that unfolded on the House floor and disagreed with many of the rulings from the Speaker that blocked Leger's attempts to bring the budget up for a vote.

"They ran the clock out basically," she said.

The Legislature is taking a “fresh start” with the budget, House Speaker Taylor Barras told reporters Monday morning, on the first day of acti…

'Let's just get this over and head to Omaha,' Jay Dardenne said of Louisiana's budget clog

Commissioner of Administration Jay Dardenne remains optimistic that the state budget impasse in the Louisiana Legislature will be resolved soon.

Leaders from Louisiana colleges and universities, the state Department of Health, prisons and social services programs got another chance Mond…

In the ongoing effort to hash out a nearly $29 billion state budget for the coming year, House Republican leaders are again suggesting that th…