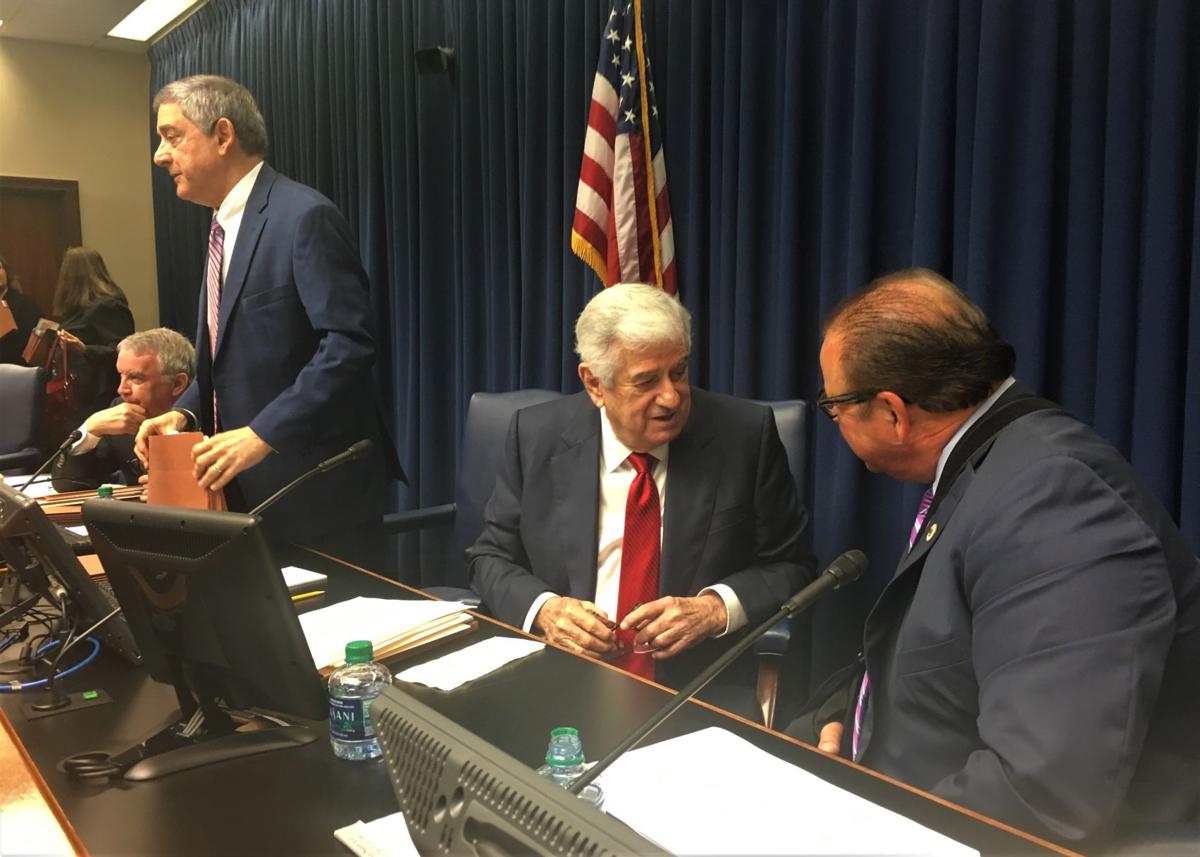 House Speaker Taylor Barras, right, prepares for the Revenue Estimating Conference meeting on Wednesday, April 10, 2019. Barras, R-New Iberia, has blocked the state's revenue forecast for several months. He is speaking to Senate President John Alario,R-Westwego, who chairs the REC. Commissioner of Administration Jay Dardenne, standing, and LSU Professor Jim Richardson are the other members of the REC. 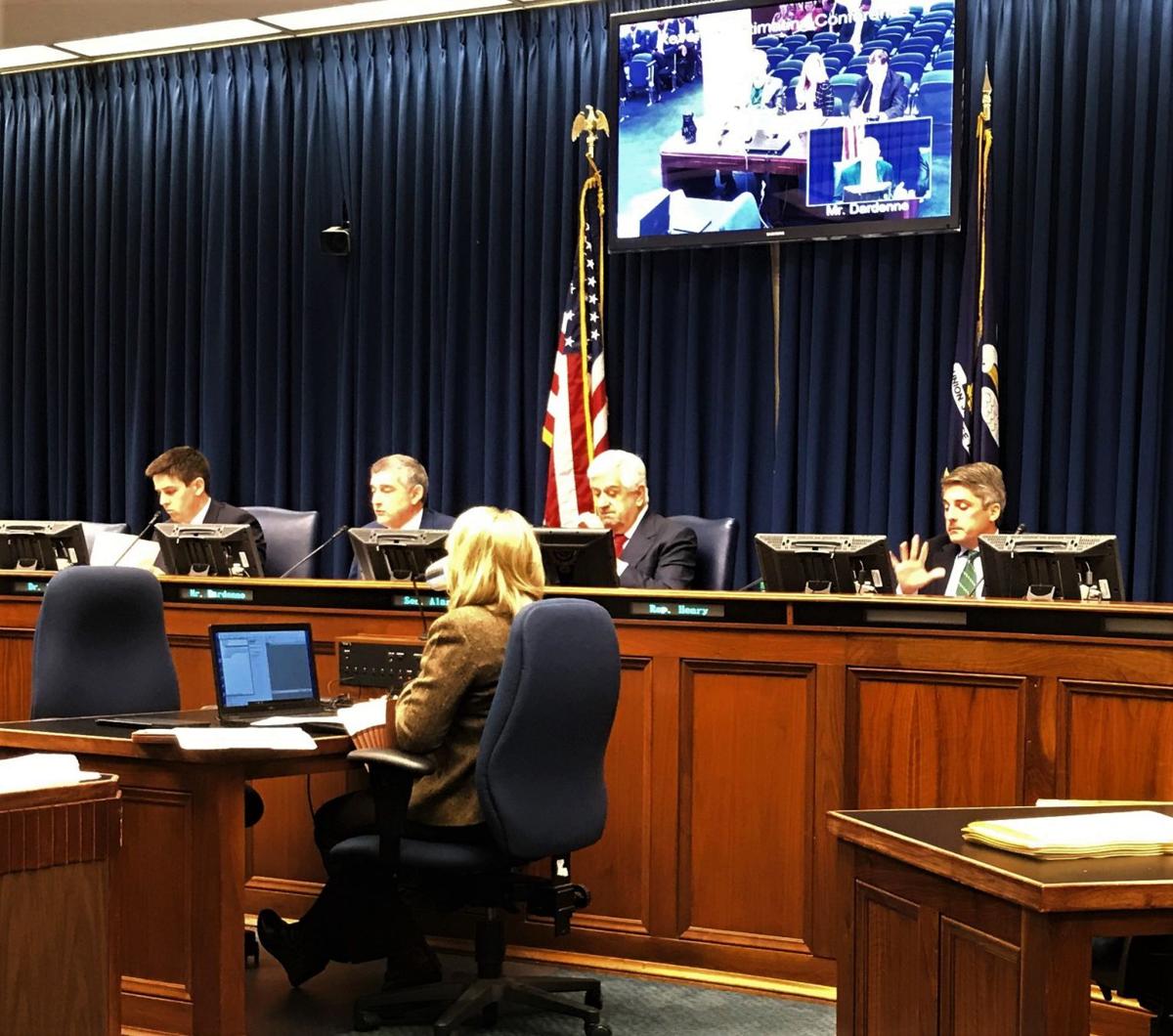 Rep. Cameron Henry, hand up on right, didn't go along with the Revenue Estimating Conference's effort to certify on Thursday, Dec. 12, 2019, how much money the state has available to spend next fiscal year.

House Speaker Taylor Barras, right, prepares for the Revenue Estimating Conference meeting on Wednesday, April 10, 2019. Barras, R-New Iberia, has blocked the state's revenue forecast for several months. He is speaking to Senate President John Alario,R-Westwego, who chairs the REC. Commissioner of Administration Jay Dardenne, standing, and LSU Professor Jim Richardson are the other members of the REC.

Rep. Cameron Henry, hand up on right, didn't go along with the Revenue Estimating Conference's effort to certify on Thursday, Dec. 12, 2019, how much money the state has available to spend next fiscal year.

Thirty or so budget architects at the state Office of Planning & Budget spent the year tracking actual spending by government departments. In November and December they made budgetary lists and checked them twice.

For once the holidays pass, the really big work begins on cobbling together the state spending plan for the next fiscal year, which begins July 1.

January is when administration executives make their adjustments in preparation for the governor to present the executive budget proposal to legislators on Feb. 7.

That means six weeks of meetings with department heads, all of whom will be appealing preliminary budgets and arguing for more funding for this program over that service. Before Gov. John Bel Edwards signs off, he will want to ensure the budget proposal reflects his priorities, including the projects he’s pushing this year – expanding early childhood education and more money for public colleges and universities – that could necessitate decreased spending elsewhere.

House Republicans made that task more difficult by blocking the Revenue Estimating Conference’s projections that the state will bring in more money from taxes, fees and other revenue sources. In addition to creating more work for the budget architects, stalling the REC forecast also creates procedural difficulties and requires next year’s budget to be drafted using much lower estimates approved in April.

For the second time in as many years, conservatives in the Louisiana Legislature Thursday refused to certify how much money is available to sp…

“If we had a certified amount, if we were working off an official amount, we’d have a sum certain that could be expended, then we could say we want to do more in these areas and we’re going to have to reduce the amounts in these areas,” Commissioner of Administration Jay Dardenne said.

Dardenne’s Division of Administration includes the Office of Planning & Budget and has the job of drafting a budget that balances available revenues with spending on specific services, all of which have constituencies and many of which are governed by state law.

Traditionally, the governor’s executive budget, which he is required to draft and present at a specified time each year, serves as the base from which legislators rearrange, add and subtract then approve.

But that won’t happen.

Last year, Edwards proposed a budget that used money as forecast by the REC economists but not approved the panel itself, rather than the lower numbers from the previous year.

The play will be the same this year, Dardenne says, as the administration doesn’t want to release a spending plan that details huge cuts that in the end won’t be needed. “If we went with the April forecast, we would have to be cutting an inordinate amount that doesn’t represent reality. We’re not going to play that game that makes it look like we don’t have the revenue there when everybody knows the revenue is there,” Dardenne said.

Though Edwards won reelection last month and is the only Democratic governor in the Deep South, the newly elected Louisiana Legislature is more conservative and has a two-thirds Republican majority in the Senate and a near super-majority in the House. New leaders will be selected in January, but the move in December to block new income figures indicates that the new group of GOP legislators also want to take on a larger role in the state budget.

"It's time, as you can see in the Legislature on both sides, that we start doing things differently. This is one of those steps," said House Appropriations Chair Cameron Henry, representing the House on the four-member REC and refusing to certify an increase of revenues that the other three of the members wanted. All four members must agree to the revenue projections.

The REC economists – one for the Legislature and one for the administration – point out that several indicators of Louisiana’s economy are getting better, though they’re not rising very fast. Meanwhile, national economists are predicting a possible recession during the next 18 months. The economist’s projection would allow for an additional $168 million to spend on prisons, education and other state services for the current fiscal year and $103 million for the following year, compared to the last official REC projection adopted in April.

Mark Ballard: The talk of a recession is clouding Louisiana's optimistic views

Three weeks after winning a tight reelection, Gov. John Bel Edwards was in a playful mood as LSU prepared Thursday to head for Atlanta to cont…

Henry urges caution. If a downturn is looming, state government shouldn’t allow expenses to grow. The increased sales taxes and suspended tax exemptions that helped stabilized the state’s finances are scheduled to expire in 2025. The state should be wary about making the state budget bigger, he said.

Waiting until January, February or March would give the economists more information to make more accurate predictions, Henry said.

This year’s budget, which runs through June 30, is $31.63 billion with $9.72 billion coming from Louisiana taxpayers and businesses. (The rest are fees that are dedicated for specific purposes and $14.4 billion from the federal government.)

The GOP-dominated House drafted its own budget for the current fiscal year. After five months, and soon before the House-written instrument was presented, Speaker Taylor Barras, the New Iberia Republican sitting on the REC, lifted his opposition to the revenue forecast – an acknowledgement that Louisiana was collecting more tax dollars as the economists said. It also saved the House from having to submit a budget with dramatic cuts.

Without a new amount, the administration is forced to use the last figure the REC agreed upon, which was in April, to draft the spending plan.

But a standstill budget doesn’t really mean that the same amount spent last year is allocated for this year.

Increases in costs from year to year – the average price of premiums for family health insurance policies, for instance, increased 5% from 2018 to 2019 – requires state government to take money from programs and services to pay for the increased costs.